Zarya From Overwatch Has Become A Gay Icon, Ironically 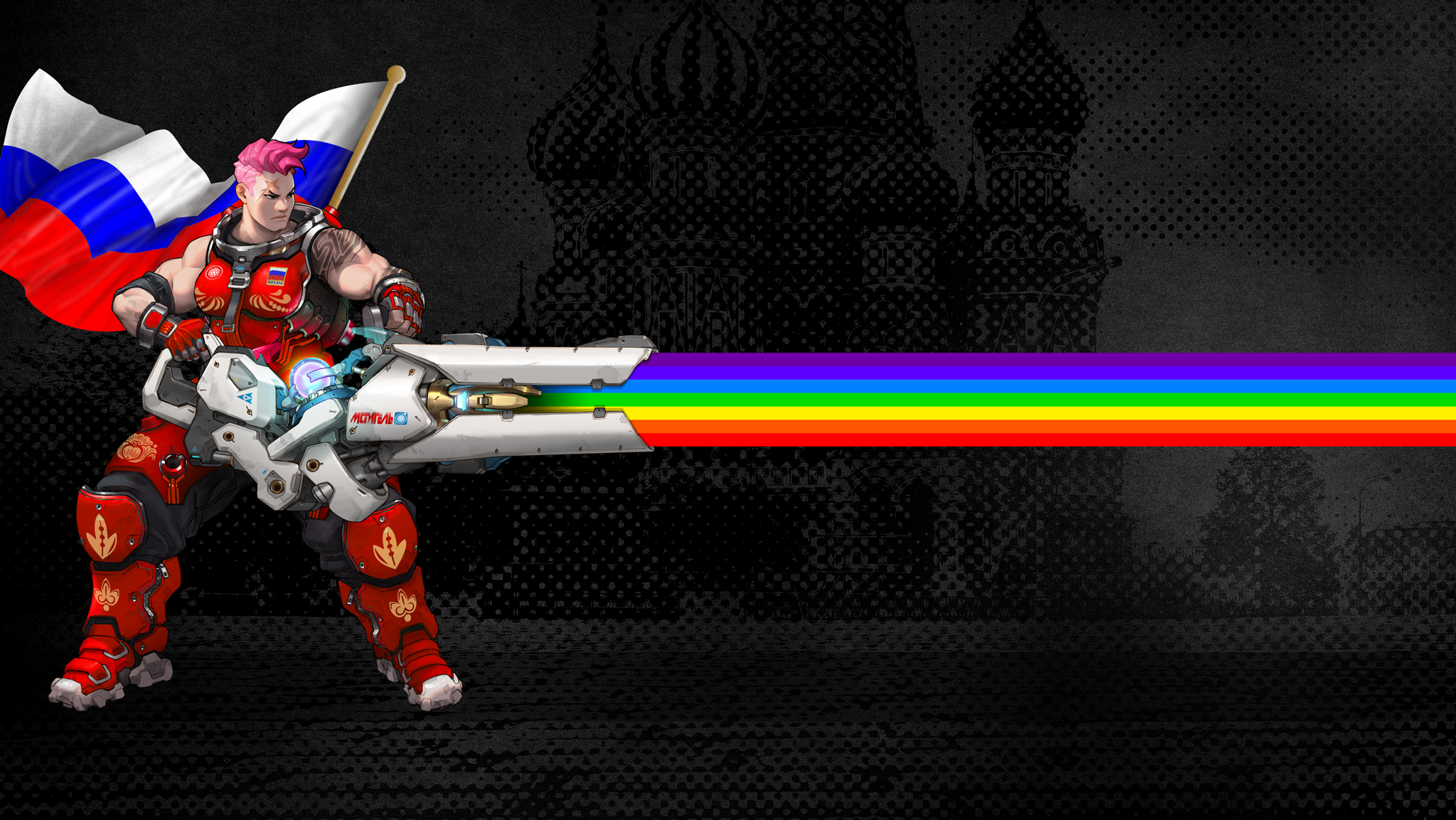 Lots of Overwatch fans read the game's proud, pink-haired Russian lady soldier Zarya as gay. While perhaps not a huge deal on its own, that interpretation conflicts with homophobic views widely held in Russia and backed by the state, forcing Russian Overwatch players to reconcile two clashing interpretations of a widely admired character. Illustration by Sam Woolley

Overwatch's intricate character design isn't just about aesthetics. Its heroes' culturally distinct outfits, involved backstories and pithy one-liners all beg for a deeper look into their identities. As a result, in the month following the game's release and the two years leading up to it, Overwatch fans have moulded the game's heroes to befit their player fantasies.

Canonically, Zarya is a diehard Russian patriot. To fans, she is the pink-haired big spoon of our dreams and to many, a gay idol. While big muscles and short dyed hair certainly don't mean a woman is gay, there's no question that a huge number of fans read Zarya as a Sapphist. And so, a canonical conflict arises: The Russian government in recent years has taken great measures to crack down on expressions of homosexuality, which — if Zarya were gay — might make her country a hard one for her to love.

Zarya is one of the strongest women in the entire Overwatch universe, and certainly the strongest of the playable female characters. In a given Overwatch match, she fills the role of "tank", a tough front-line unit who clears a path for more fragile teammates. Her armour, perfect for absorbing damage, conceals her burly build. In her post-game animations, she's either deadlifting her enormous particle cannon or flexing with a conspiratorial smirk. Her hair is styled bright pink and short with a pomp up front. On her face is a cross-shaped scar. I wouldn't be surprised if she was carved out of marble.

Born in far-flung Siberia, Zarya ("dawn" in Russian), saw first-hand the Omnic Crisis, a robot rebellion against humans. After her fellow Siberians were ravaged, Zarya swore to defend her people should future crises arise. While training as a bodybuilder, she was scouted by her national athletics program and placed on the "world championship" (read: Olympic) track, traditionally a supreme honour in Russian culture (current doping scandals aside, the country blew $US51 billion ($68 billion) hosting the 2014 Winter Olympics, the most expensive Olympics of all time). Her plans were thwarted when another robot attack struck on the eve of the championships, motivating her to enlist and defend her country as a Russian Defence Forces soldier.

Zarya's backstory frames her as a fervent patriot, one of the highest virtues of a Russian citizen.

Under Prime Minister Vladimir Putin, Russian patriotism and nationalism have experienced a fierce resurgence. Last February, Putin famously professed</a that "We have no national idea besides patriotism, and there can be no other." In 2015, he remarked that Russians' "sacred duty" is "to be faithful to the great values of patriotism". Russians who serve their country are regularly ushered to the front of any line. Some say such patriotic fervour fuelled Russia's highly-criticised annexation of Crimea in 2014. On the flip side, citizens who vocally question the Russian regime can wind up exiled, imprisoned or dead. Members of feminist anti-Putin rock group Pussy Riot were imprisoned in 2012 under the charge of "hooliganism" after a series of dissident shows. Last year, opposition politician and outspoken Putin critic Boris Nemtsov was shot dead on the Moscow streets (he had alluded to this possibility).

Zarya's patriotism is her primary sticking point as an Overwatch ambassador to Russian gamers. Her gut impulse to devote herself to Russia's safety, to mire her identity in Russia's wellbeing, distinguishes her as a high-grade Russian citizen. One of her voice lines is literally "I am Mother Russia." Another: "Together, we are strong." Zarya is a cell in her body politic, and she likes it that way.

Russian anti-gay sentiment runs deeper than church law. It is bolstered by the Kremlin. The country's so-called "gay propaganda law", passed in 2013, bans the spread of "propaganda of nontraditional sexual relations" under the premise of protecting Russian youth from moral indecency (it is also illegal to "offend religious feelings"). In 2014, Putin passed a law preventing Russian children from being adopted by gay couples. Over 50 per cent of gay Russian respondents for 2013 survey by the Russian LGBT Network, a St Petersburg LGBT advocacy group, had experienced emotional abuse (15 per cent physical). Homosexuality was actually illegal in Russia until the early '90s.

Before delving further into Zarya's sexuality, it's important to reiterate that just because a woman is mega-strong and pink-haired, that does not by any means mean she is gay. A woman's appearance has absolutely no bearing on her sexual orientation, period.

Blizzard hasn't explicitly commented on Zarya's sexuality, but has left the door open for these fan interpretations (Blizzard told me that the fact that she resembles Russian Blizzard employee Tamara Bakhlycheva is a coincidence). Bill Petras, Overwatch's artistic director, confirmed at 2015's BlizzCon that the game would contain a gay character. In Blizzard's PAX East presentation last year, Zarya was touted as a diversity hero: "We've been hearing a lot of discussion among players about the need for diversity in video games. That means a lot of things. They want to see gender diversity, they want to see racial diversity, they want to see diversity along the lines of what country people are from. There is also talk about diversity in different body types in that not everybody wants to have the exact same body type always represented. And we just want you to know that we're listening and we're trying hard and we hope Zarya is a step in the right direction."

I asked a few Russian Overwatch players what they thought about Zarya in the context of contemporary Russia. Responses were all over the map. Ivan Tomilov, a 22 year-old student in St Petersburg, agrees that Zarya's appearance is strikingly non-traditional for Russian women. Dyed hair and muscles, he said, are antagonistic to Russian ideals for feminine beauty. And yet, he effused, "If we talk about my personal opinion, I would like to have this war maiden hug me like a big, fuzzy Siberian bear. I believe that she would be an excellent wife and a good friend. I think she isn't only as strong as a fortress, but full of goodness and love, too." (I won't lie — this made me tear up.)

Timur, 29 and from Sterlitamak, says he is repulsed by Zarya, who to him reads as gay. "I don't like her bodybuilding... Characters from other countries are attractive. Ours is — as a man," he said. "To be honest, she looks awful." His view of her sexuality, he explained, brings him shame; but on the other hand, her veteran status makes him proud. He felt conflicted.

When I posed the question of Zarya's identity politics to Russian games journalist Tim Seyfelmlyukov (who has written for us), he made it his mission to get to the bottom of how Russian gamers perceive their Overwatch ambassador. After posing the question to his Zavtracast gaming podcast's audience and perusing some Russian games forums, his read on Zarya became increasingly complicated. In a zip file, Seyfelmlyukov forwarded to me dozens of comments from Russian games forums professing wildly disparate — but always full-throated — takes on her countenance and backstory:

"Maybe, in the future, Russia will be more tolerant toward lesbians," one read.

"So Zarya, compared to Overwatch's other women, is more buff and has pink hair. That means nothing. It doesn't make her a lesbi, and it doesn't shame Russia," read another.

Others were less open-minded. Commenting on Blizzard's announcement that Overwatch would boast gay characters, one commenter wrote, "A game is gonna start 'Guess who the faggot is?' I'm proposing Zarya." Another: "Why does no one want to fap to Zarya? It's because she's a lesbo. Ew."

"Zarya is a transvestite: trololo."

"All this LGBT nonsense should be burnt in the inquisition," read another comment on a Zarya thread.

Seyfelmlyukov views Russian gamers' takes on Zarya as a good barometer for where Russians stand on gay rights. According to Seyfelmlyukov, some Russians refuse to play her at all, citing her gay-reading appearance. On Russia's 2ch, their version of 4chan, that kind of criticism thrives, although Zarya's patriotism is a strong sticking point among the Russian gaming community. Many players, Seyfelmlyukov said, don't even register Overwatch characters' appearances, instead focusing completely on competitive strategy. Zarya is a good tank and plays a vital role in a number of Overwatch strategies. That's enough.

Seyfelmlyukov made a crucial point about why Russian criticism of Zarya feels ambivalent to the extreme: "In Russia, you would never find someone like Zarya on the streets. These kinds of stereotypical lesbian masculine girls with flashy hair are super rare gems in Russia. Because people are not exposed to gay people expressing themselves, people [here] don't make the connection."

Blizzard has left many aspects of Zarya's identity open to interpretation, as they have with the rest of the Overwatch cast. This sort of ambiguity allows players to project whatever they want onto their favourite heroes. We can view them in the best possible light, so long as their identities aren't fixed or formulated. Zarya is lovable, fascinating, dynamic and has a sick Particle Barrier useful for absorbing enemy fire. She is so much more than her suspected sexuality and her Russian patriotism. But the space between these apparent incongruities is the very place where players can come to terms with their own biases.