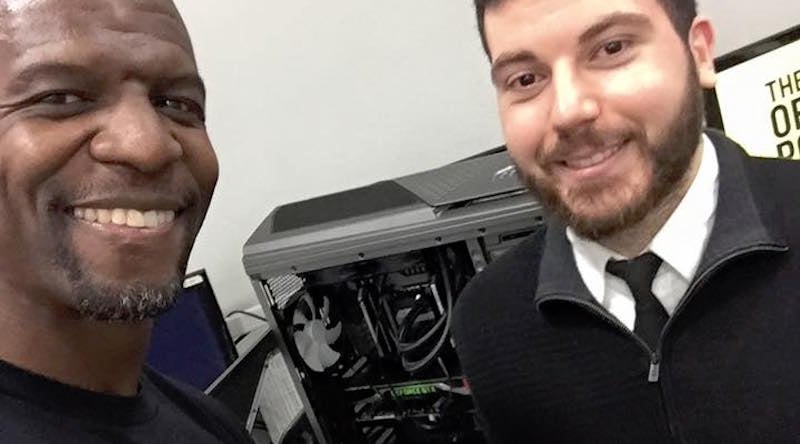 Actor Terry Crews has spent the last week showing the world the process of building his first gaming PC. It's been adorable to watch.

Crews was invited to a Battlefield 1 event at E3, where a bunch of celebrities played against each other, including Snoop Dogg and Jamie Foxx. This clued him into what's interesting about games, one of his son's hobbies.

"I'm trying to learn everything that he likes so that we can be closer," said Crews on Facebook, where he's been livestreaming his building process.

His first video, in which Crews declared himself "part of the PC master race," features a rundown of the components he'd purchased so far, including Nvidia's new, top-of-the-line GTX 1080. He worried he'd bought crappy stuff, though, so the Facebook post was about soliciting feedback.

Crews even used Facebook Live to get help with plugging in a cable correctly.

And the result was this charming exchange in the comments:

Later, Crews turned on a livestream for help in figuring out why the monitor wasn't getting a signal, only to discover that he'd turned the machine on and off...and the signal came back. Welcome to the world of PC gaming, Mr. Crews!

Crews ended up using Best Buy's Geek Squad department to put the finishing touches on his computer, but made sure to point out how he'd done most of it himself. (Just watch the videos. I believe him!)

Next up for Crews? Twitch, apparently. He's already promised to livestream.

"There's nothin' wrong with gaming," he said, pointing out how kids and parents can bond over it. "There's nothing wrong with video games and all that stuff. [...] I'm really, really looking to being a big part of the gaming community."