Nobody Actually Knows How Pokemon GO’s ‘Nearby’ Feature Works

I’ve been playing Pokemon GO non-stop over the last week, and the most frustrating feature by far has to be the “Nearby” function. Ostensibly, it is a guide that helps you navigate where to go to find critters. It looks like this: 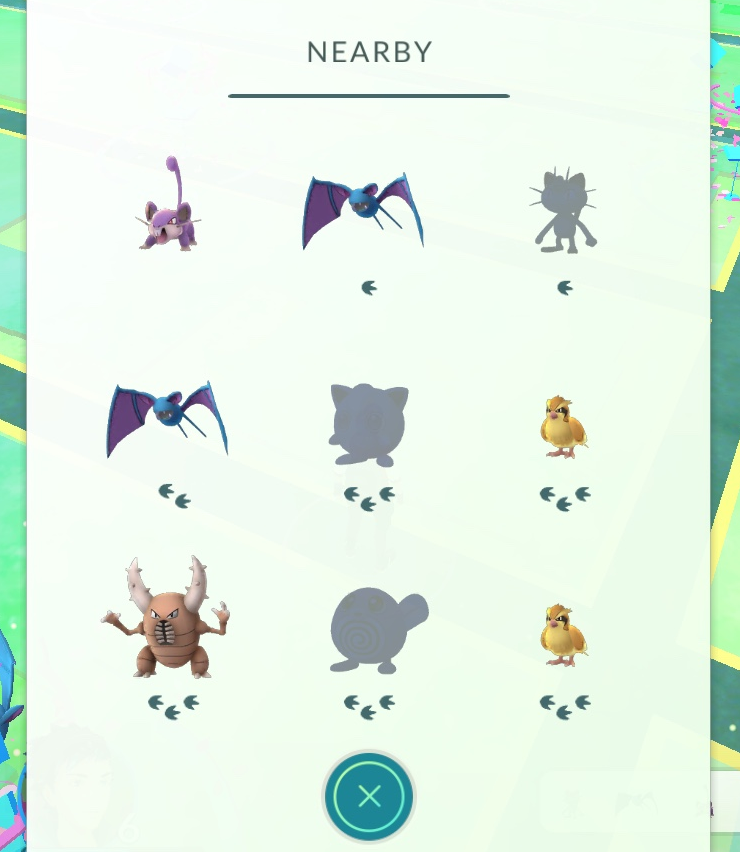 The game does not tell you how to decipher the “nearby” function, which is funny when you consider that you may spend half your time in Pokemon GO staring at it.

A couple of things are obvious from the get-go of course: The number of steps correlates to distance, and the silhouetted Pokemon are critters that you haven’t caught yet. This is not actually enough info to get out there and track a creature, but hey, it’s something I guess.

OK so: How much distance do the footsteps actually represent? Everyone agrees that no footsteps means “you’re practically on top of it,” but from there, things get a little more murky. Anecdotally, the figure I’ve seen repeated the most is that one pawprint = 50m of distance, but there’s actually no consensus on that. Serebii, the web’s leading Pokemon resource online, says one pawprint is 20m, two is 100m and three is 1km.

Which is it? ¯_(ツ)_/¯ My scientific understanding of the pawprints is as follows:

One pawprint: Let me walk in every cardinal direction in the hope that I randomly find it.

Two pawprints: Let me walk in every cardinal direction in the hope that I randomly find it.

Lets say you see a three pawprint Pokemon on the Nearby tab and you decide that you want it. How do you hunt it down? Players have come up with all sorts of methods, most of them largely based on trial and error, and none so far officially confirmed by the developers themselves.

I’ve heard, for example, that if your minimised Nearby tab flashes while you walk, that it is telling you that you are walking toward your critter of choice. I’ve also heard that this method is bullshit.

I’ve read that the location of the Pokemon on your chart correlates with proximity. So in this example: 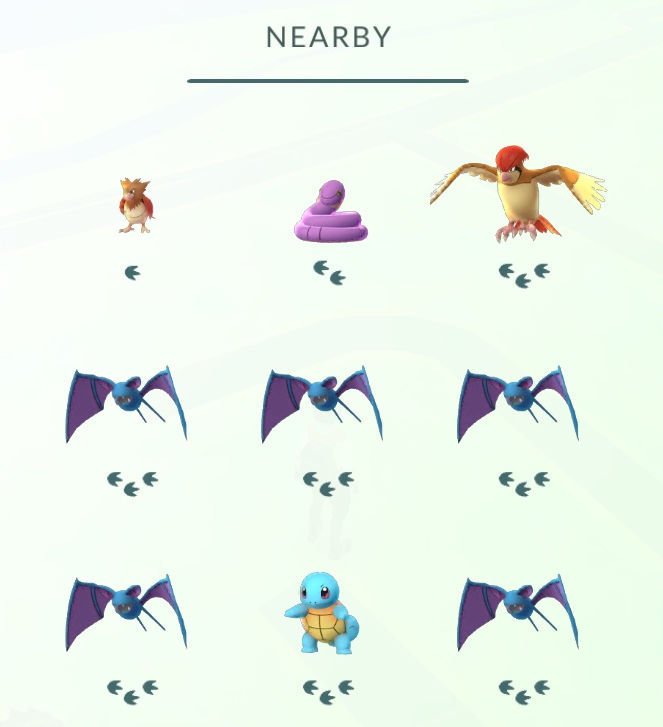 You read it from left to right, with Spearow being the closest, and the last Zubat on the bottom right being the farthest. I’ve heard players say that if you pay attention to how the chart updates as you move, you should be able to tell if you are at least moving closer to the critter. This “method”, if you could even call it that, still involves guesswork.

I’ve seen this chart by Redditor DJToaster pop up a whole lot as well: 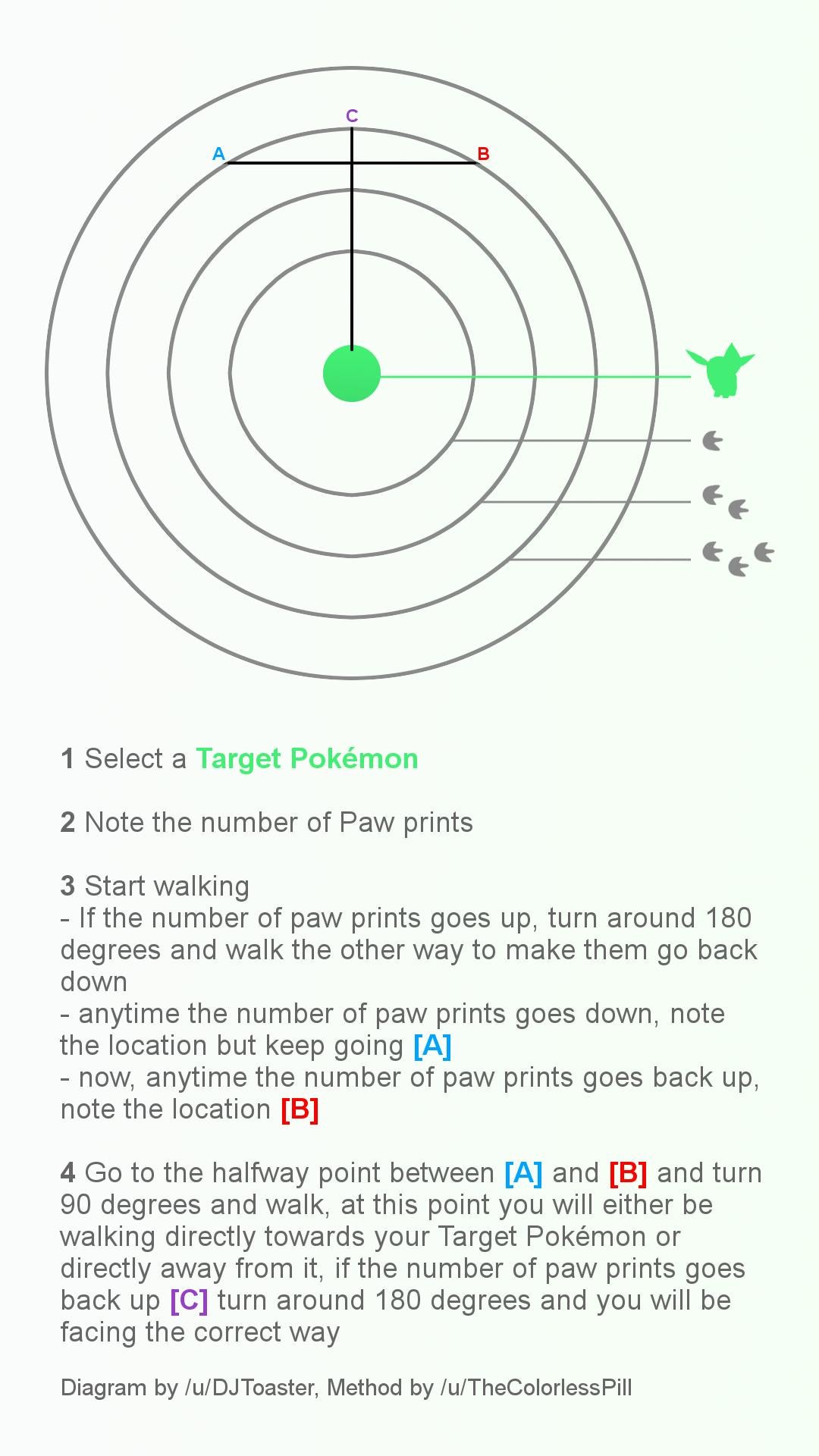 Pretty ridiculous, huh? It is also not foolproof. Trying to find a three pawprint Pokemon with this method is still a crapshoot, especially if your Nearby tab says that every single monster “near” you is three pawprints away, something that I personally experience often in Pokemon GO.

Players have even taken to downloading Ingress, Niantic’s previous game, in the hopes of getting a firmer grasp on where Pokemon might spawn. Desperate times call for desperate measures, as they say.

I’ve tried every method listed in this post, and have walked away with mixed results. Methods declared false by the fandom have allowed me to track rare Pokemon; methods sworn to work by others have left me circling over and over again, like an idiot.

Meanwhile, we hear nothing but silence from Niantic, who refuses to explain how one of the biggest feature in their game actually works even after repeated requests for comments. The developer does know that Pokemon GO is confusing though, judging from Niantic founder John Hanke’s comments to Game Informer:

We tried to create UI that people could figure out, but if it’s so obtuse, you for example were having trouble figuring out what it’s supposed to do, then that’s just a failure on our part. We got a lot of feedback during the beta, we made a lot of improvements, we fixed a lot of bugs, but I would put it into that category of something we’d love to make that more so that it’s more obvious.

Given that Pokemon GO is hoping to update bi-weekly, here’s hoping that Niantic reworks Nearby to something more reasonable. Even a simple indicator of distance could work wonders.

Until then, until Niantic gives an official verdict on what you’re supposed to do with Nearby, don’t blindly trust methods you read online. Nobody is 100 per cent sure of what they’re talking about yet.