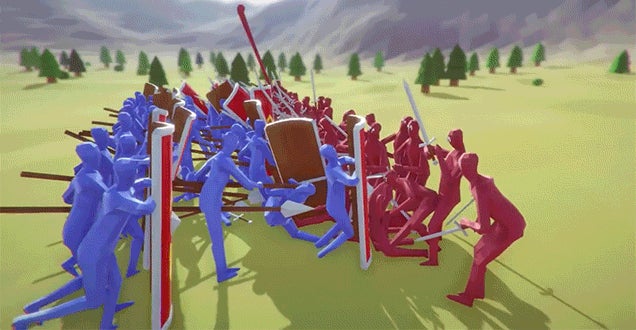 The two armies are armed with medieval weapons, and then they just storm at each other to see which army will win (and presumably, which weapon is superior). It's like a twisted version of rock, paper, scissors, only way more fun.

Watch the video! It will make you laugh as the red dudes with swords run straight into the blue dudes with shields and lances. Or when they just floppily charge at the other side with no weapons and have a cannon mow them down. The game is stupid simple: you pick your weapons, the other person picks theirs, and then your battle lines run at each other until there's no one left standing. The beauty is in the hilarity. I need to play it right now.

You can sign up for the alpha version of the game made by Landfall here.

Look at how fun a battle can be: