Should You Play Dungeons & Dragons 5th Edition Or Pathfinder?

When it comes to roleplaying games, there are two titans that dominate: Dungeons & Dragons 5th Edition and the Pathfinder Roleplaying Game. They have a lot of similarities, but both games bring something very different to the table. Whether you’re an experienced gamer, or never touched a d20 before, here’s everything you need to know to make the right choice for you.

If you’ve ever been in a game or hobby shop, or even a bookstore, you’ve probably seen walls of colourful Dungeons & Dragons or Pathfinder books. They may seem like fierce competitors, but they have a lot in common. Let’s take a closer look at each game and their shared history:

To get more insight into these games and how they differ, I spoke with writer Stephen James Wardle, who’s been running and playing Pathfinder games for years, as well as running the D&D 5E YouTube series Threshold (where I’m a regular player). I also spoke with Casey Adams, a 4-Star GM and Venture Lieutenant for the Pathfinder Society, who has also been playing and running both Pathfinder and D&D games for years.

D&D 5E Focuses On Ease of Use, Pathfinder Has More Mechanical Complexity 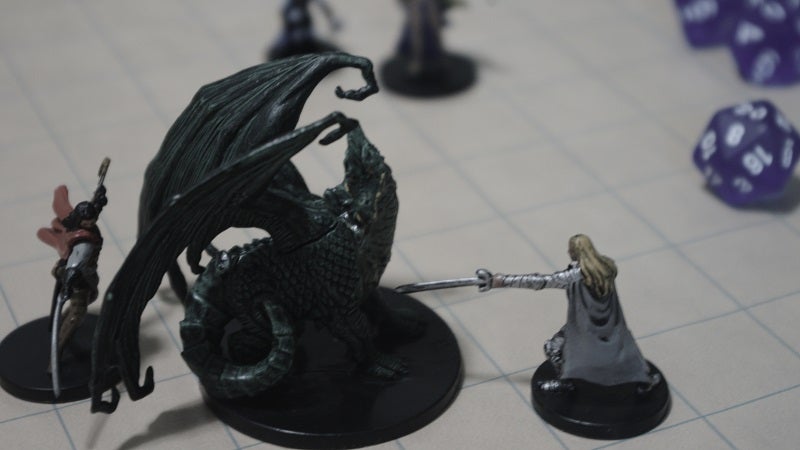 Both game systems come from the same roots, but they have branched off and gone their own directions. And that’s a good thing because they each cater to different types of players. Wardle explains that D&D 5E has simpler rules overall, is easier for players and DMs to learn, and best suited for the pick-up-and-play types out there. Making characters is quick, there’s less for DMs and players to micromanage, and the gameplay itself is more forgiving for players — which is ideal for someone who is new to tabletop RPGs.

D&D’s vagueness can also be detrimental for some players, though. It’s rule set is simpler, but it also offers a lot less of the customisation and complexity that Pathfinder does. The Pathfinder system is mechanically deep, so players who are interested in precision, strategy, and advanced combat tactics will feel right at home. However, having a complex system also makes it more difficult to learn. And because its rule set clearly defines what players can and cannot do, some players might find it too restrictive or “gamey.” That said, like with most hard-to-learn skills, once you know Pathfinder’s system well, it can be a more rewarding experience. And from a GM perspective, Wardle says running a Pathfinder game usually requires a lot more preparation. Whereas D&D makes it a little easier to DM by the seat of your pants if your players decide to do something — or fight something — you weren’t prepared for.

Character Creation Is Quick and Easy In D&D, but Pathfinder Offers More Customisation 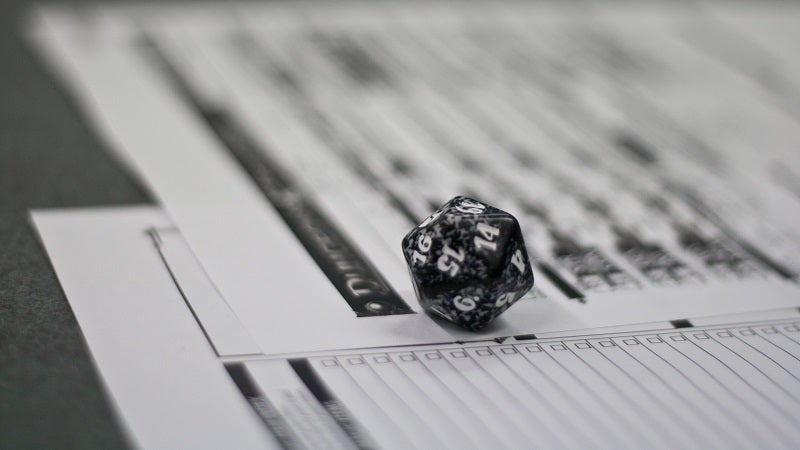 For most players, the best part of any RPG is making a character. It’s fun to decide what your character is good at, what they’re bad at, and tweak their personalities so you can be the fantasy character you’ve always wanted to be. D&D makes this process pretty painless, but also sacrifices some levels of customisation in the process. Adams suggests that Pathfinder gives you more opportunity to realise a character’s maximum potential, at least in terms of character-defining stats and skills. You could make a Pathfinder character that is incredibly skilled at doing just one thing if you wanted, which would make your character a valuable asset in some high-level Pathfinder games. In D&D, however, you’re usually better off building a more well-rounded character that does a few things well enough.

Basically, Pathfinder puts very few limitations on player characters as long as they stay within the rules, while D&D has less variety and tries to keep player characters within certain parameters. If you want to spend time building, customising, and tinkering with stats until you have exactly the character you want, you’ll enjoy Pathfinder — especially if you’re a “min-max” type of player. If you’re more interested in building a story around who your character is, and not what they can do, D&D makes it a lot easier to do so. 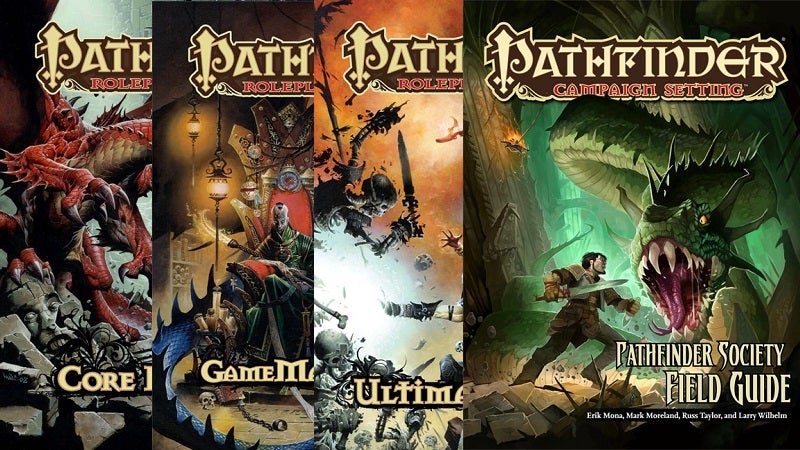 Because Pathfinder is compatible with all of the previously published D&D 3.5 materials, as well as all of the homebrew OGL 3.5 stuff floating around out there, there is no shortage of things to do. Not to mention, Paizo Publishing puts out new books to expand the Pathfinder universe every year. For D&D 5E, however, your sources are limited to the books Wizards of the Coast have been publishing since late 2014, and some smaller, custom things people post on the DnDNext Reddit.

Paizo has also promised that Pathfinder won’t ever have a new edition, meaning the rule system is pretty much going to remain static from here on out. Wardle says this is a good and bad thing: The good is stuff players can instantly wrap their heads around will keep on coming, both from Paizo and from homebrewers. The bad is that they have done so much already with what they have, there aren’t many creative directions left for them to go. And there’s so much material out there already that it can be overwhelming for someone who’s just looking to get started. Also, the smaller amount of books and other gaming materials in D&D’s arsenal has left a void that’s been filled with homebrew creativity. Wardle explains that 5E makes it easy to reskin an existing class into something fun and different, but Pathfinder’s universe is so expansive, there’s probably already an “official” class that does what you were hoping to create. This is either convenient or limiting, depending on how you look at it.

Both Games Give You Ways to Find People to Play With 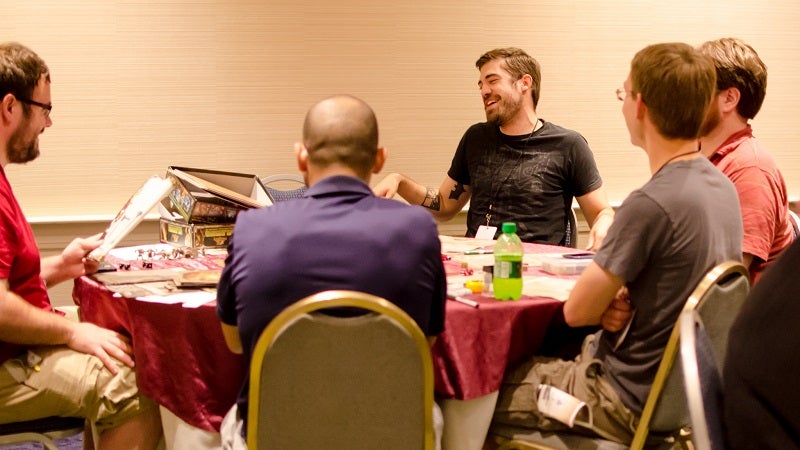 If you don’t have a regular group to play with, both D&D and Pathfinder offer ways for you to find, meet, and play with others. The D&D Adventurers League is an ongoing campaign from Wizards of the Coast that uses D&D 5E rules. You make a single character to play in Adventurers League sessions where everyone’s progress and character experience is tracked throughout a season, and players can drop in or out on a session by session basis (though it’s best to stay with one group through the entire campaign). It’s fairly new and still finding its footing, though, so it’s not perfect. But if you can find a game session at a local game and hobby store, convention, or online, it’s sure to be a lot of fun. If you’re interested, you can learn more and look for a game here.

The Pathfinder Society has been around much longer, and it shows. It’s a bit more organised, far more expansive in terms of adventures, and more people partake. The character you make becomes an agent of the in-game “Pathfinder Society,” whose job it is to explore, solve mysteries, fight stuff, and represent one of several competing factions. Play sessions are organised into seasons, and the scenarios and adventures differ every season. Your character keeps on going as long as they don’t die, your progress and experience is tracked and recorded every session, and the overall story changes every season depending on how you and other players performed. Pathfinder Society is a bit more drop-in, drop-out friendly than the D&D Adventurers League, and it’s not uncommon to play a session or two with a group that you never see again. Games are usually organised at game or hobby shops, and lots of conventions. You can learn more by downloading the free Pathfinder Society Roleplaying Guild Guide PDF.

Play D&D 5E If You Want to Tell Stories and Focus On Roleplay, Play Pathfinder If You Want a Deeper, More Intricate Gaming Experience

As Andrew of the DawnforgedCast YouTube channel so eloquently explains in the video above, the similarities between the two games are abundant:

They’re both fantasy roleplaying games. They each have magic, elves, dragons, swords. Both have many common terms like charisma, armour class, skill checks. Both have equal opportunity for adventure, combat, roleplaying, storytelling. Both use the same set of dice to determine checks, damage, and outcomes. Both have character sheets and a game master. Both make use of improvisation, as well as pre-created materials like campaigns, maps, or pictures… both have their basic rules online… both have a starter set… both have a core set of books, and each of these books is around $US30 ($39) to $US40 ($52). Lastly, both are very popular, and there’s a lot of online and offline support for them.

No matter what system you choose, you’ll have a good time. You and your friends will get to explore dangerous places, fight terrifying monsters, find awesome treasure, and make plenty of jokes. So the deciding factor is not one of enjoyment, but of structure — especially when it comes to combat. It all depends on what draws you to these games in the first place.

If your past gaming experience is limited to action video games and board games that aren’t super complicated, you prefer a good story and roleplaying over a well thought-out battle, or have a hard time with complicated rule systems: go with D&D 5E (at least to start out). You’ll get all the awesome adventure and fun without having to deal with too many encumbering rules.

If your past gaming experience includes hardcore, complicated board games, tactical grid-based video games, and wargames like Warhammer, you value strategy over character development or story, or tend to thrive in maths-heavy rule systems: go with Pathfinder. If you’re willing to put the time into the deep, yet well-balanced system, it will be a truly rewarding game experience.