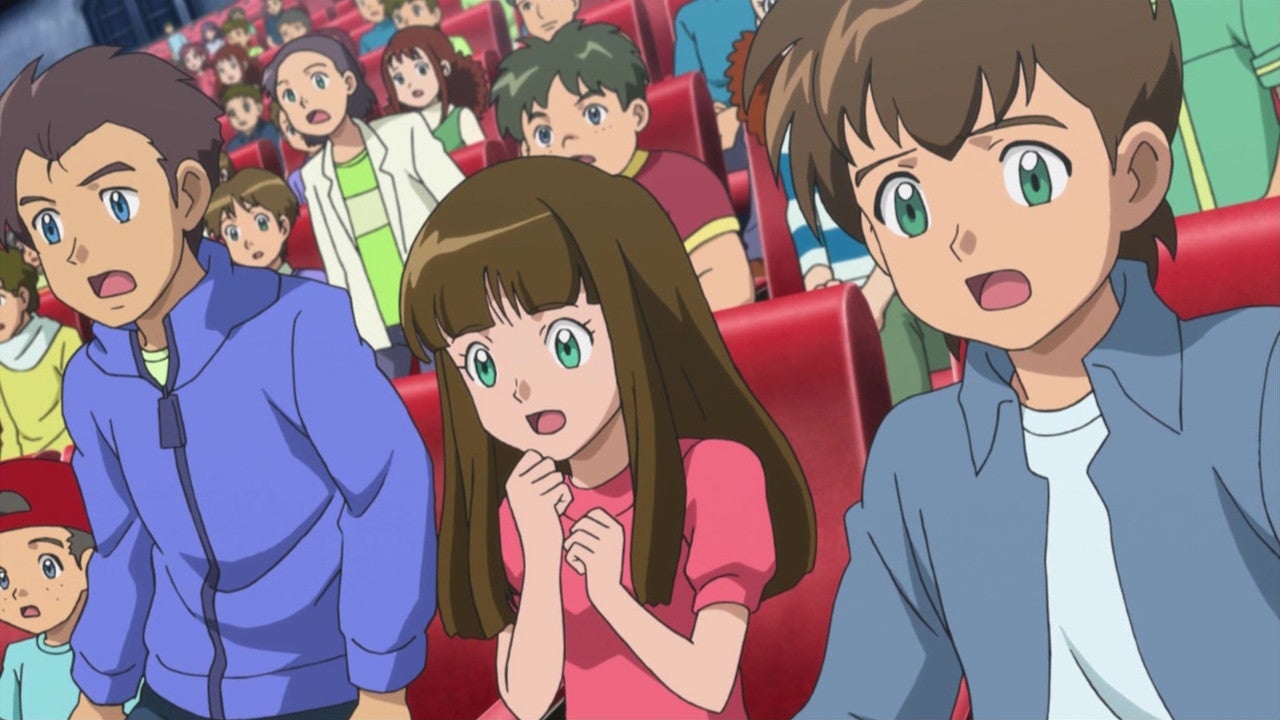 The latest episode of Pokemon XYZ sure is good at eliciting opinions from the internet. [Image via Pokemon Go Master]

[Note: The article has spoilers]

As Kotaku first reported, Ash just competed to win the Kalos League in the most recent Pokemon XYZ episode.

In nearly two decades, this was his best chance to win his first official league championship. 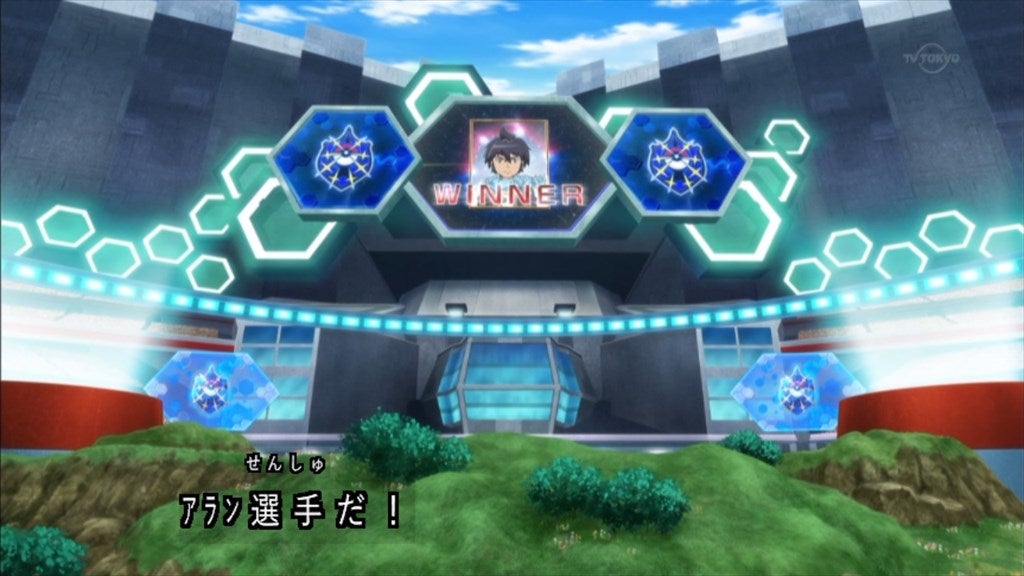 Of course he did.

The teaser hyped up the possibility of an Ash win, so going into the episode, folks were excited. Instead, they saw their dreams of an Ash win crushed. 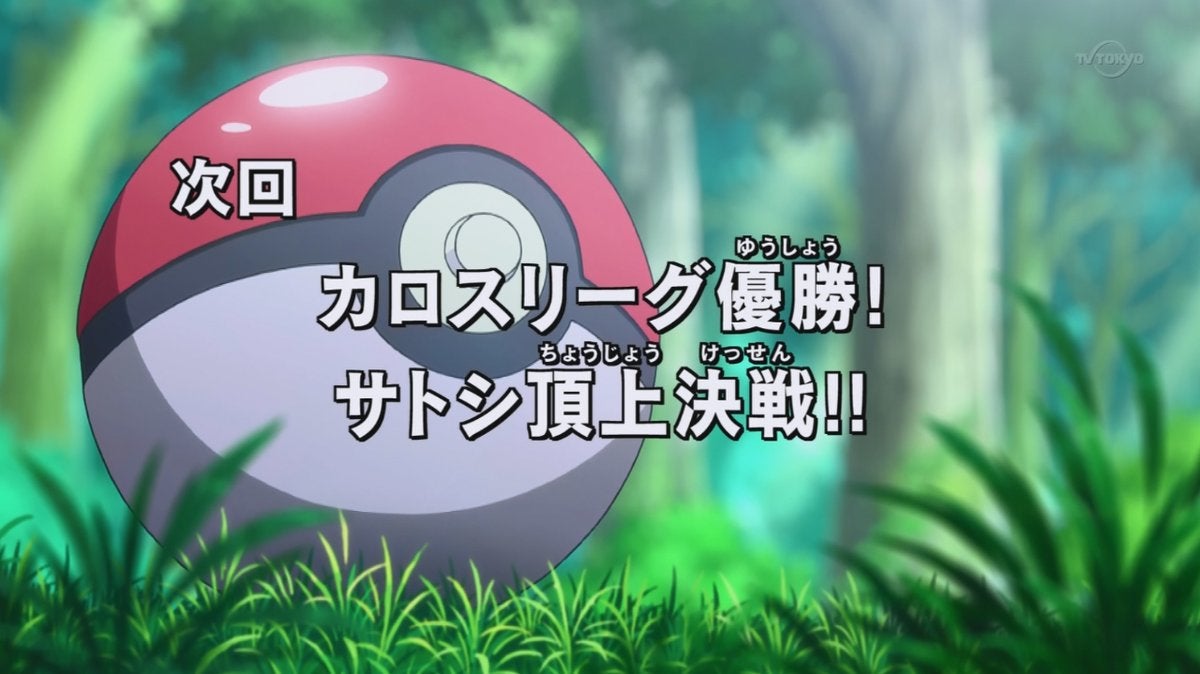 It probably didn't help that this episode was titled "Kalos League Champion! Ash's Decisive Big Battle!" It doesn't say Ash was going to win, but I can see how some people's expectations would raised that he would. 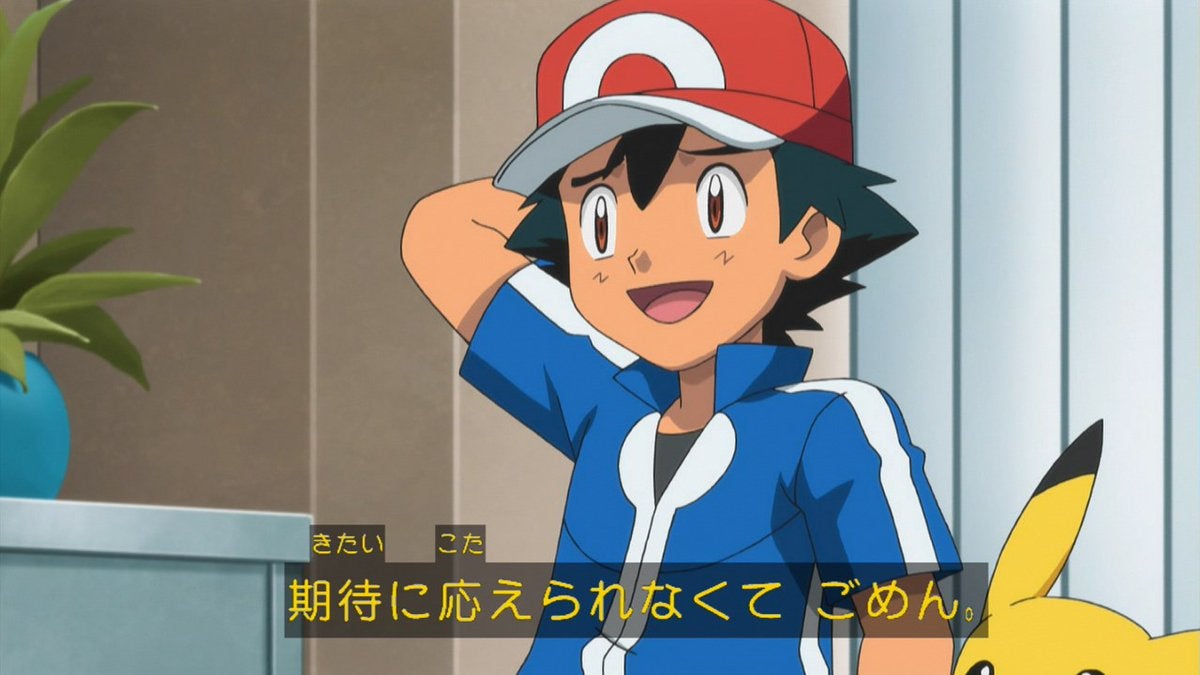 Ash apologises for not meeting our expectations. [Image via Gahalog]

The dislikes on the teaser clip for next week's episode shot up soon after the this week's show.

Let's have a look at what people have been saying online about the episode and Ash's loss. 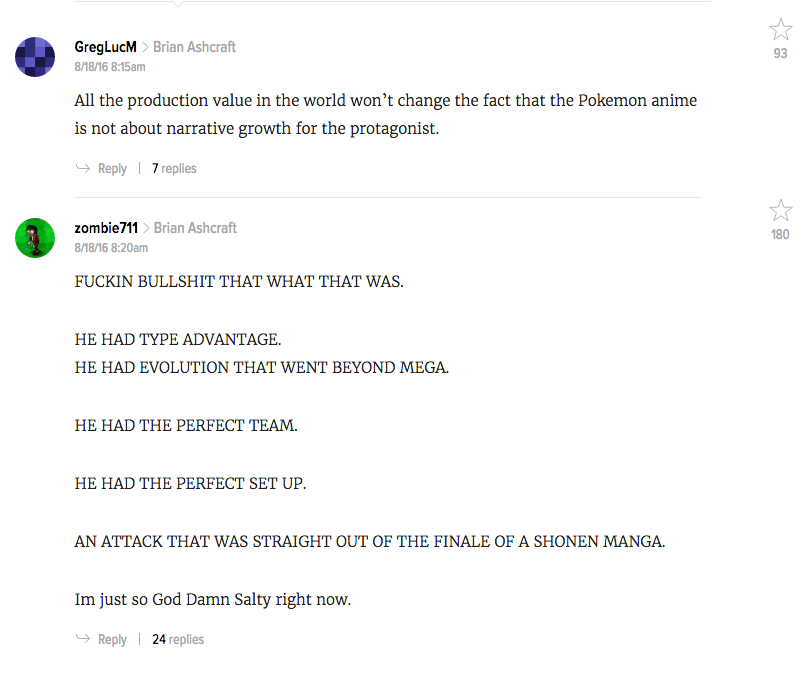 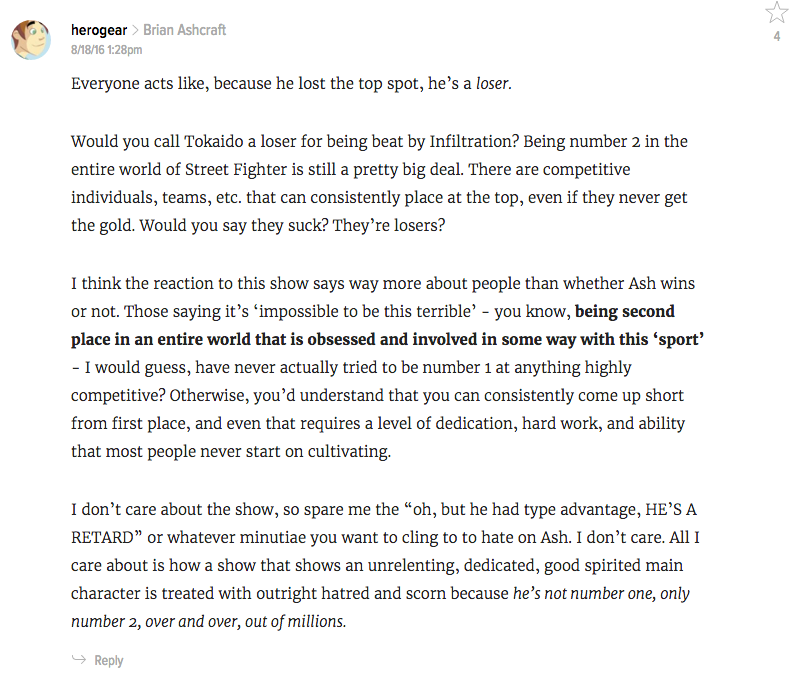 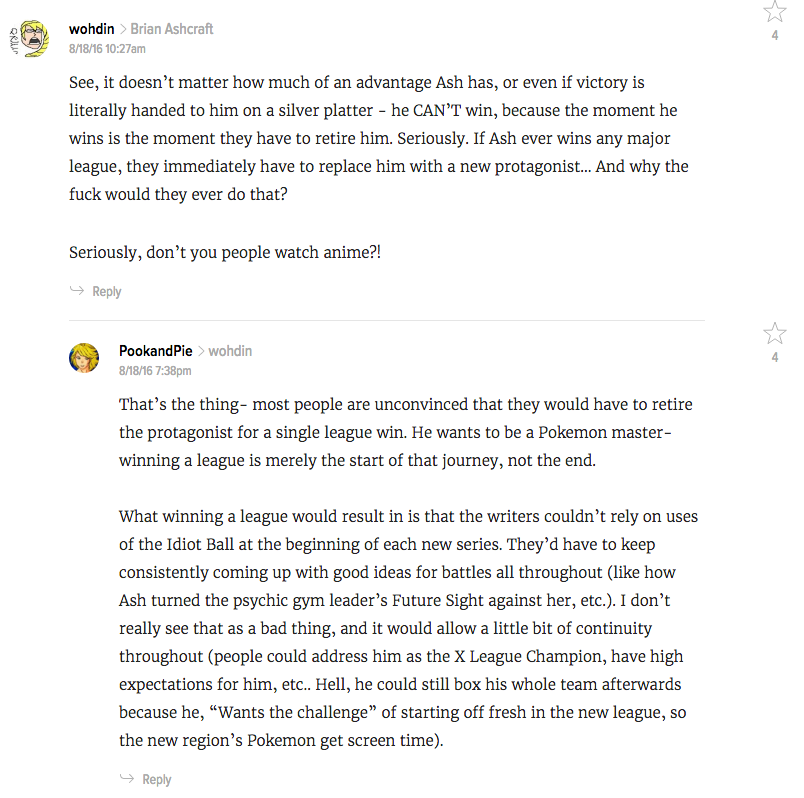 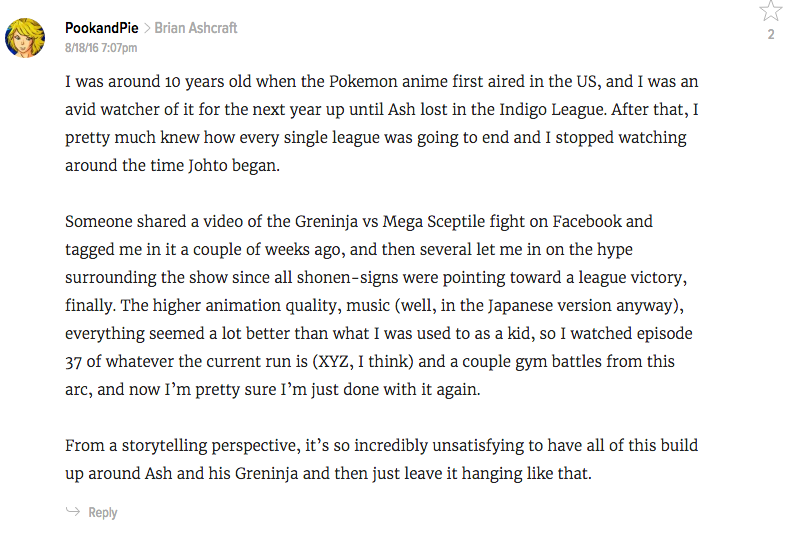 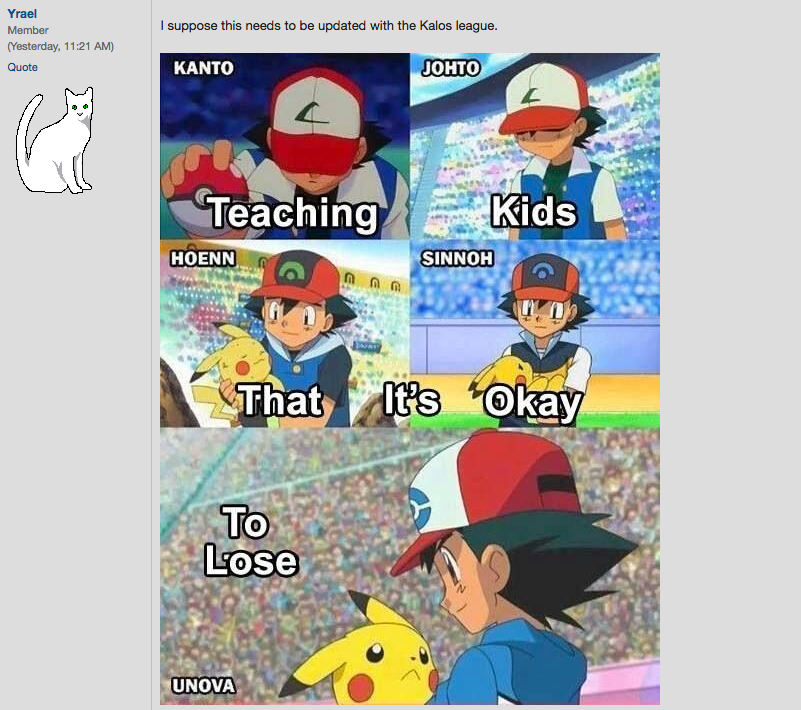 (Note: Everyone is responding to an official tweet stating the episode was starting and asking if Ash or Alain was going to win.)

@Pokemon_cojp Why can't you just let him win =[

@Pokemon_cojp He had everything to win! Why did you do that? We're ashamed of you, Pokémon Company. #anipoke #JusticeForAsh

@Pokemon_cojp Its like what, twenty years or something? He still hasn't win the league , BS pic.twitter.com/69Ani9p71G

@Pokemon_cojp u treat us as fool and hurt us fans

@Pokemon_cojp this anime is just a jackpot, this anime shows to kids dont matter how much u try u never gonna reach ur dreams

@Pokemon_cojp Why did ya fucking make Ash lose after hyping him winning so much?? like i am pissed. Quitting the anime after XYZ now???

@Pokemon_cojp Yeah, you messed up. Completely ruined the Kalos League and the entire XY series for me.