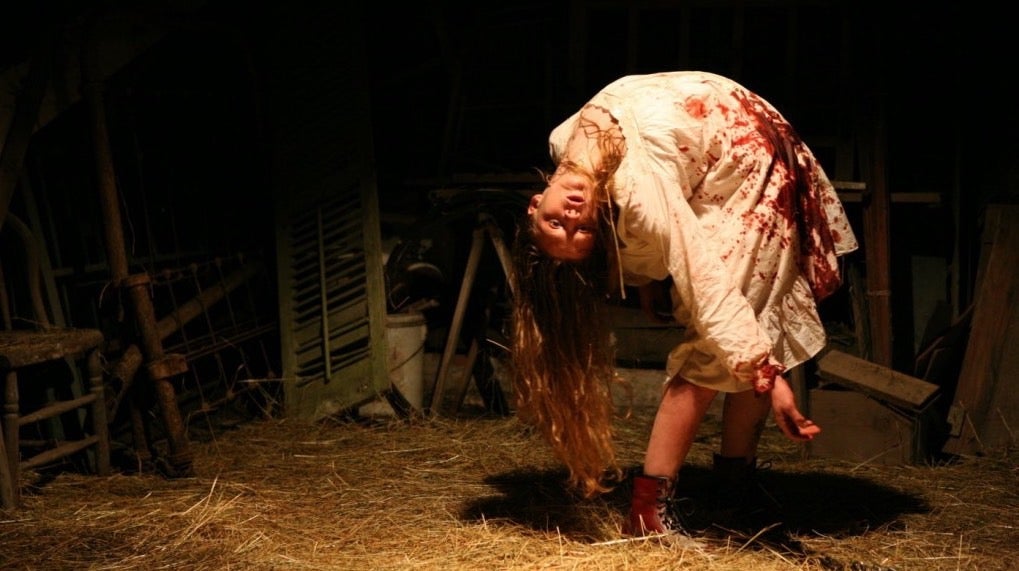 One of the biggest complaints about found footage horror films is that they rely too heavily on boring, cheap jump scares to get audience reactions. But these eight examples actually dig deeper — and bring genuine terror to the screen as a result.

TV's Ghost Adventures is as cheesy and staged as most reality shows are, and is also as formulaic as a Scooby-Doo episode. (I still watch it, though.) Written and directed by the filmmaking team known as the Vicious Brothers, Grave Encounters pokes fun at ghost-hunting TV shows with razor-sharp accuracy. Then it ups the stakes by wondering what would happen if a supposedly haunted filming site was not just actually haunted, but also filled with pissed-off evil spirits.

It's a simple premise that explains why the crew and "talent" (the lead actor clearly studied hours of Zak Bagans footage... god bless him) insist on keeping the camera rolling the entire time. (Most found footage horror films have a documentary element for that very reason, as this list will show.) By the time the Grave Encounters group realises even sky-high ratings aren't worth tangling with a bunch of spooks of the abandoned-insane-asylum type, it's too late.

7) The Taking of Deborah Logan

I kept seeing this title pop up on Netflix and finally gave it a whirl. It's got a clever premise (a camera crew begins following a woman with Alzheimer's, only to realise there are much darker forces at work inside her mind), and it does a good job pacing the reveal of its creepy backstory, making great use of the rambling house where nearly the entire film takes place. It's also elevated by uncommonly good performances by Jill Larson as the troubled patient, who only looks physically frail, and Anne Ramsay as her harried daughter. (The actors playing the documentary crew are less effective, but they're not on camera as much.) Word of warning: The Taking of Deborah Logan is especially chilling if you're terrified of snakes.

Though the words "a new film by M. Night Shyamalan" are enough to make some filmgoers' blood run cold, The Visit offered a welcome return to horror form for the director. It's also probably the most technically sleek found footage movie ever made, especially taking into account the fact that it's supposedly being filmed by a teenage girl. Best of all, the obligatory twist ending is actually very, very satisfying — highly observant viewers will see it coming, but even then Shyamalan ensures it's still scary as hell when it happens.

Speaking of twist endings, The Last Exorcism's last act is quite the seat-kicker. Ashley Bell's performance as a girl who might be possessed by a demon or worse was strong enough to garner rare recognition beyond the realms of horror, including an Independent Spirit Award nomination. (Director Daniel Stamm's precursor to The Last Exorcism is also worth seeking out: A Necessary Death is an eerie faux-doc about assisted suicide that's more thriller than horror.)

No disrespect to George A. Romero, but the best found footage zombie movie of 2007 was not Diary of the Dead. It was the Spanish production [REC], which managed to scare the bejeezus out of viewers worldwide (and spawn sequels, an inferior American remake, etc.) despite the pesky inconvenience of subtitles.

The grand dame of cannibal films, this 1980 nugget of nasty trash-sploitation is offensive, violent, racist, and contains allegedly real animal torture. Naturally, it's become a cult classic. Cannibal Holocaust might not scare you in the standard shrieking, horror movie sense, but it will most definitely give you nightmares.

The original, and still the best, of the wildly successful series, it's incredibly suspenseful and uses its $US11,000 ($14,444) budget to great effect, proving that sometimes simple and subtle can yield the most believable (and therefore terrifying) results. Never before has a slowwwwwwly opening door caught on night-vision camera inspired such abject terror in audiences.

The film that really, truly started the found footage craze. Oh, Blair Witch Project, we loathe you for clearing the path for so many crappy movies about shrieking kids who can't put down their camera, but we also love you for all the great movies you helped bring into the world (including non-horror entries that didn't make this list, like Cloverfield). And while we're ok with never seeing that snot drool ever again, that last shot gets us every time.