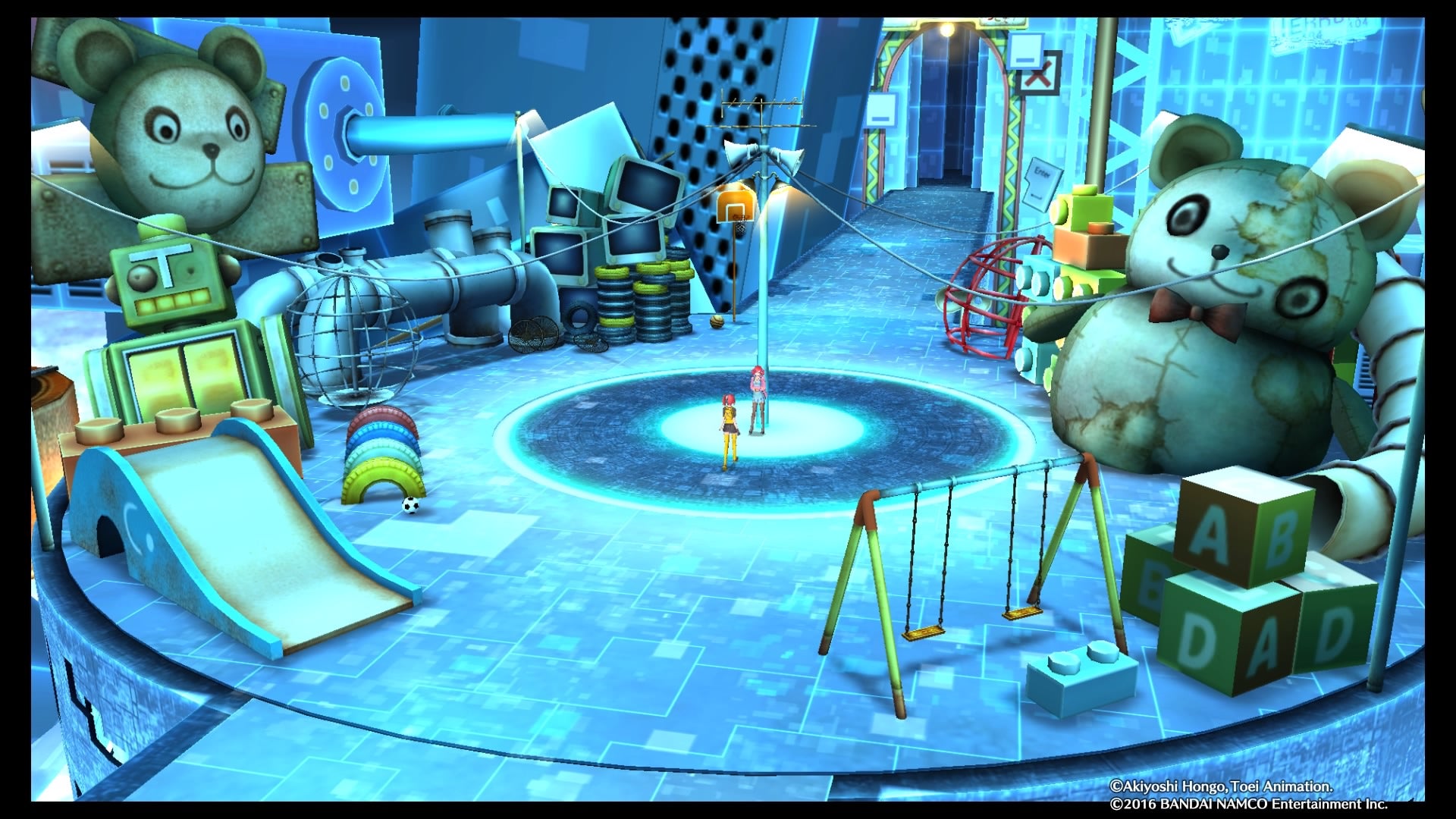 Mike Fahey is my role model, and he wrote this review of Digimon Cyber Sleuth, and it's great, and you should read it, but in case you wanted someone else's take on an excellent Digimon game, here's mine: "Finally! A JRPG worth playing!"

It's no secret to anyone who knows me that I'm not a big fan of JRPGs. The gameplay just doesn't interest me all that much, I get bored with the narratives far too soon, and, honestly, it's weird to see a genre with "RPG" in the name that doesn't seem to involve any roleplay whatsoever. Sure, sure, I've played Pokemon and Xenoblade Chronicles and a few others, but nothing's ever really stuck a chord other than Earthbound, which I never finished because I eventually got bored.

I've been trying to find the perfect gateway JRPG, something to really get me into the genre, to help me have fun with it, because I have plenty of friends who enjoy these games, and I'd love to be able to have some great gaming conversations with them about these games. Enter Digimon Cyber Sleuth. 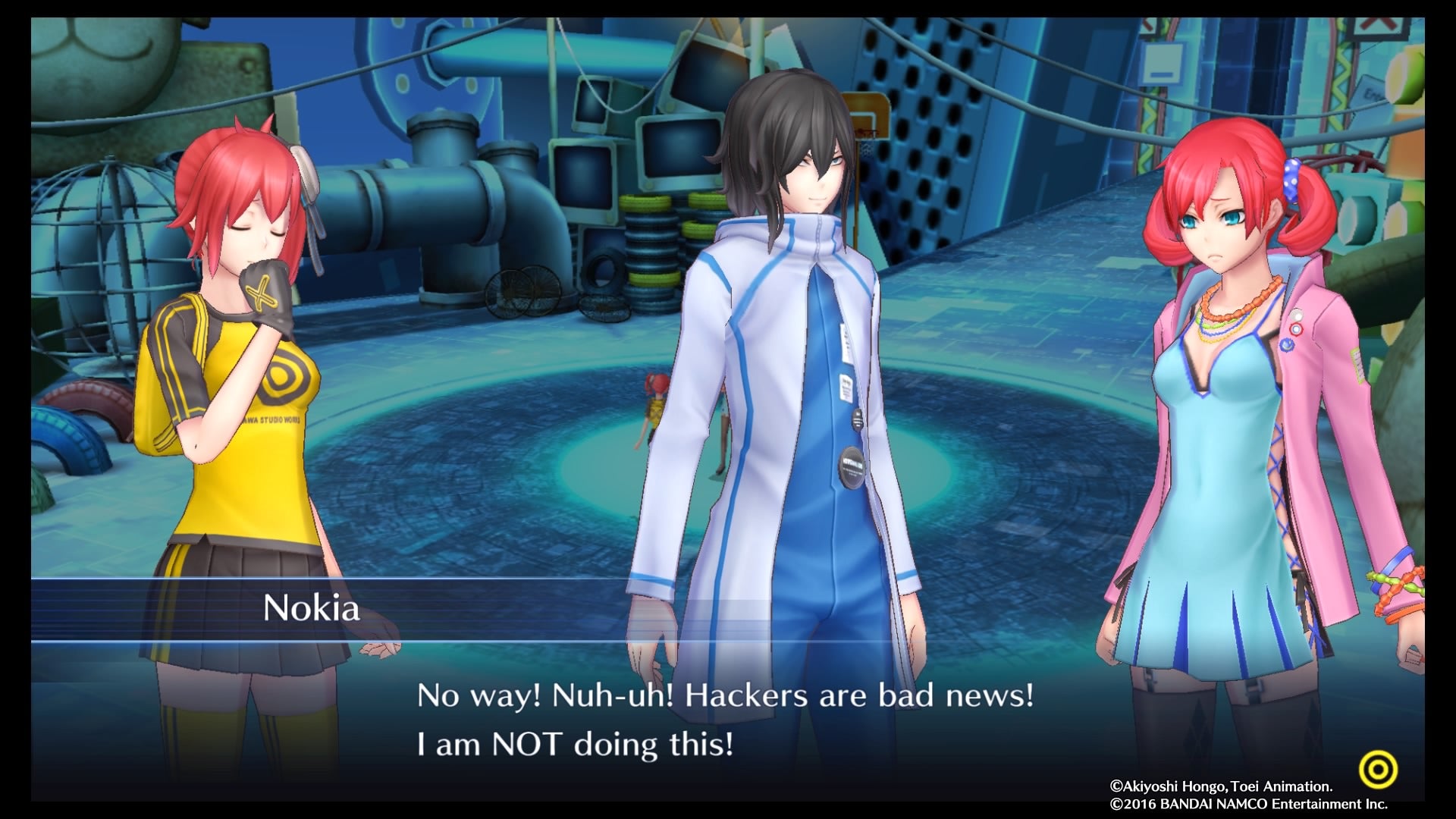 I've always enjoyed Digimon. Have ever since it first started airing in America. It's always disappointed me that the games haven't been very good, and I'm hesitant to say that I think Cyber Sleuth is a good game, but at the same time, I've got 135 hours in this puppy, making it my most-played game this year by a wide margin. I'm hesitant to call Cyber Sleuth a good game — I played it on my PlayStation 4, and it's definitely a barebones Vita port — but I won't hesitate to recommend it.

Pokemon's anime sucks for a lot of reasons, but part of that is because each episode, at least back when Pokemon and Digimon television shows were running concurrently, was based on showcasing the game's mechanics. Pokemon is to its games what He-Man was to its toys. Nothing ever happens or changes because the entire Pokemon anime is just a tutorial for one of the most aggressively tutorialised game series ever.

Digimon was a tv show about relationships. Pokemon has an episode where Charmander refuses to obey Ash because, essentially, Ash isn't a high enough level, so Ash solves this problem in a predictably video gamey way. Digimon has an episode where Tai's thirst for power is so great that he forcibly evolves Agumon into the monstrous SkullGreymon. The resolution here is all about character.

The problem is, it's much harder to make a good game from the Digimon anime than it is to make a good game from the Pokemon anime. Monster raising games are all about collection and growth. Digimon is about these intensely personal relationships with other kids and monsters. Ash can field a squad of monsters and tell them what to do, which works great in the games but leads to some boring storytelling. 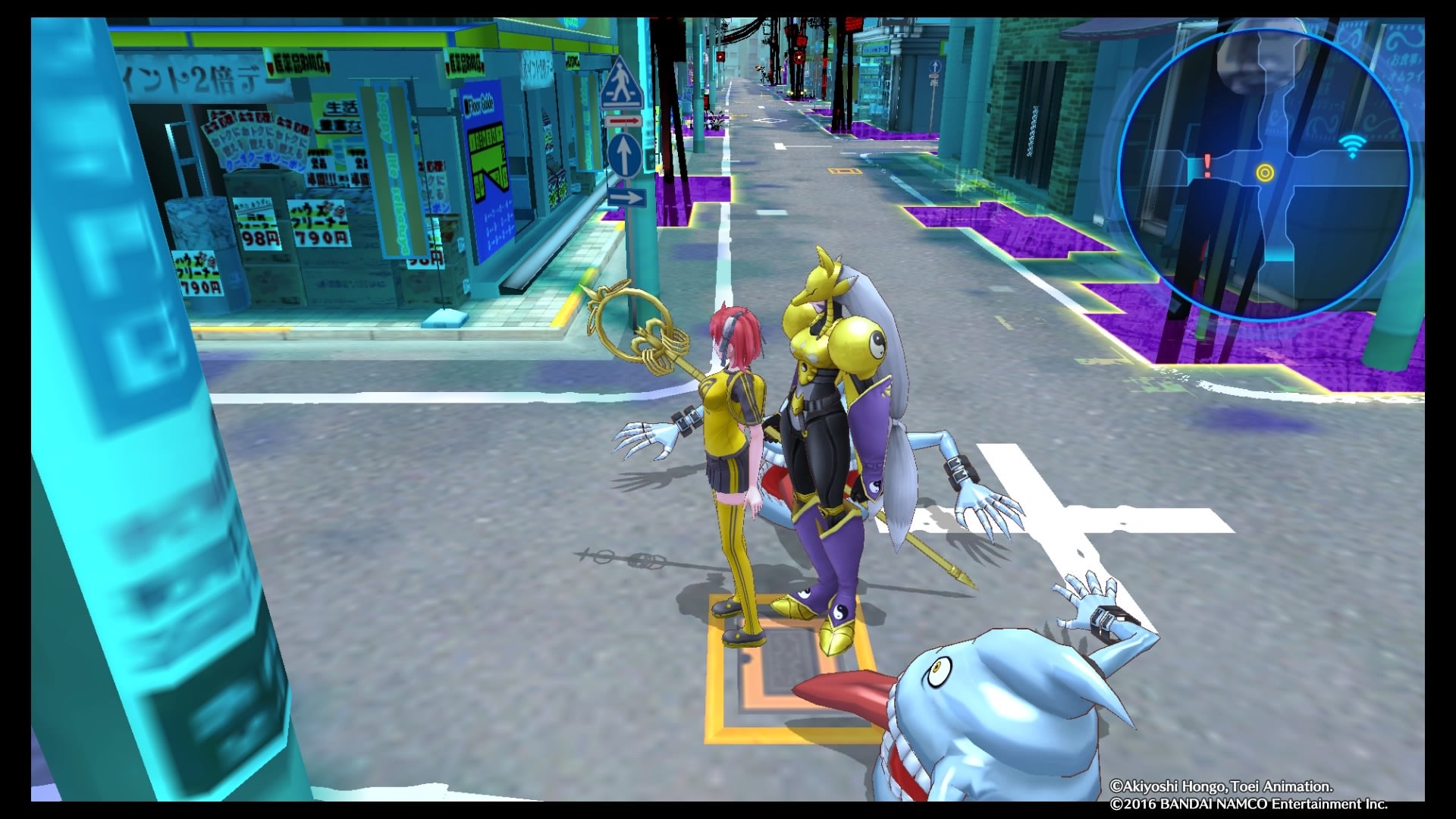 Tai can't control anyone, not even Agumon. He's just a kid; he can help Agumon digivolve into more powerful forms, but that's the extent of his capabilities. It's not super fun to play as one person who can tell one monster what to do. At that point, you'd be better off just playing as Agumon himself and levelling up; at least then you could aim fireballs and stuff.

Digimon Cyber Sleuth makes itself fun by compromising on this idea. Now you can control an entire party of 11 Digimon and capture all 240 out there. The incentive to finding mons is to scan them so you can hatch eggs and finish your collection. Rather than a meaningful one-on-one relationship with your mon, it's just you. None of your mons have any personality either. Sure, I've got a Sakuyamon, but it's not like I can take her aside and have a chat the way you might with a party member in a Bioware RPG.

Your character relationships are limited to specific characters in the game, almost all of them human. The story itself has some great moments, cool twists, and enjoyable bits of characterization; if it was an anime, it might even be considered a good one. The story's certainly better than any we've seen in a Pokemon game; when it ended, I was honestly sad it was over, wishing I'd been able to spend more time with the characters.

What sets Cyber Sleuth apart from Pokemon — and what ate up so much of my time — is the way it lets you digivolve and de-digivolve your mons. With Pokemon, evolution is a linear affair. Sometimes, you might have an evolution that requires more than just experience, like a stone that forces an evolution, but there's not much to it beyond that. Cyber Sleuth has specific level requirements and routes. One mon involved around 15 different digivolutions and de-digivolutions to arrive at the mon I wanted. Others involved copious amounts of grinding before their stats were appropriate enough for evolution.

It seems boring, and there were times when it was, because I was running around subway stations trying to bait enemies into random encounters so I could get enough XP to hit a specific ABI level to digivolve in one way to de-digivolve in a completely different way, but it was nice and relaxing. It was super chill, and I finished watching The Office while I grinded away at getting all the Mega Digimon that I wanted. 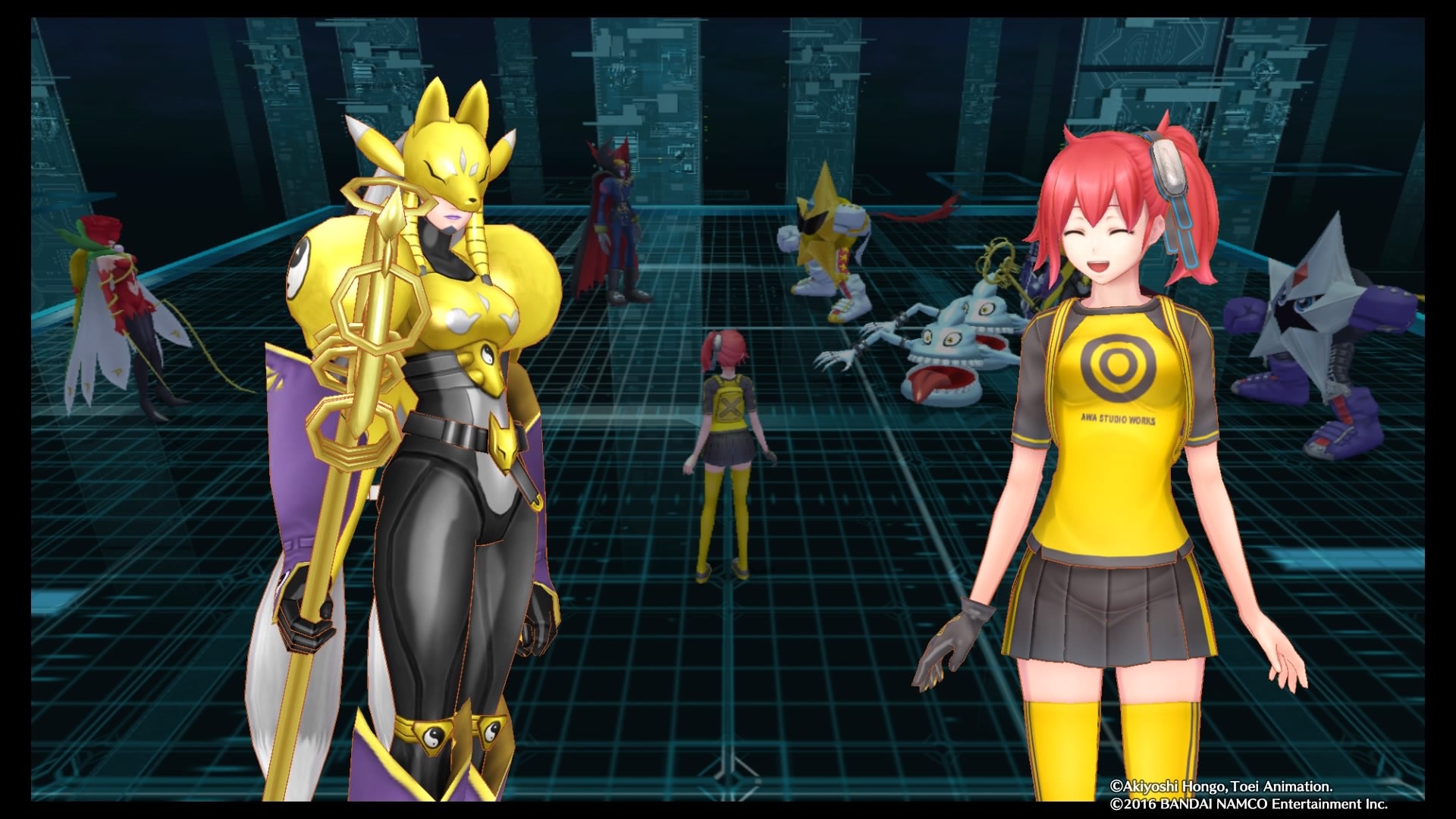 The story had some great moments, some of the jokes were on point, and the best fights were tough as heck and required distinct team compositions and individual monster builds with specific passive abilities and attacks. I loved a lot of what was there.

At the same time, Cyber Sleuth being a Vita game, the world was small, art assets were repetitive as heck, character design was awful, and the grinding, while relaxing, still went far beyond what I could reasonably recommend to anyone. If someone put me in charge of a Digimon game, Cyber Sleuth certainly is not what I would have built, but it has its charms, it was relaxing as heck, and I was always enjoying myself. I don't regret a single one of those 135 hours.

Playing Cyber Sleuth is like binge watching a sitcom; it's fun and worthwhile, but it's maybe not 'good' the way that The Godfather is good. The game gives up much of what makes Digimon a great TV show in order to make way for better mechanics. It's some of the most fun I've had all year.

Is it something you'll see used in game design curriculum in the future? Probably not. Thanks to Cyber Sleuth though, I've started dipping my toes into the JRPG pool. I've got Persona 4 Golden installed my Vita now. I have been fiddling about with getting Final Fantasy VI to work. I even picked up a copy of the original Digimon World. I might not like any of these games, but Digimon Cyber Sleuth encouraged me to finally start exploring the genre.