Good Morning, Here’s Some New Games You Need To Play 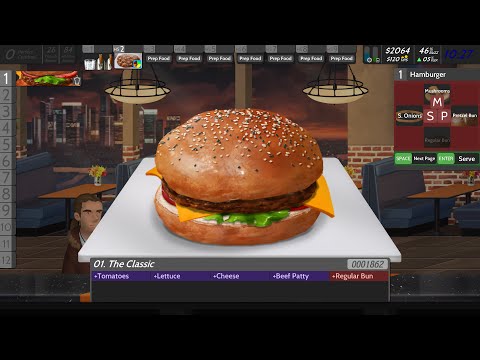 Friday is already the best day of the week. But this Friday, today, just got a whole lot better.

There have been plenty of games delayed into 2017 already, which is never a source of fun for anyone. But for all of the disappointments, here’s two new games destined to bring joy and cheer into your gaming lives.

The first is the highly underrated, manic kitchen simulator Cook, Serve, Delicious, which is getting a sequel. A sequel has been on the cards for a while, but as of this morning there’s finally some gameplay footage to pour over.

If you haven’t played it: CSD is an incredibly good co-op game, although it’s still a wonderful nightmare if you’re playing solo. The sequel isn’t slated for mobiles yet, but it will be coming to the PS4 and the PC next year.

The second thing this morning: Jackbox Party Pack 3, which comes with Guesspionage, Trivia Murder Party, Tee K.O., a Quiplash sequel, and Fakin’ It.

So let’s break down the games. Trivia Murder Party is basically a trivia game with a mini-game after every player gets the question wrong. Here’s what one of those mini-games looks like:

This mini-game is called Chalices. The players who got the preceding question are given a poison pill to put in one of the chalices, and those who got it wrong then have to pick a chalice to drink out of. Another asks the dead players a question, and those who are alive vote on which one gave the worst answer.

Come out on the wrong side of the mini-game, and you end up dead. You can still win the game in the final round if you’re dead, and the developers have said on streams that Trivia Murder Party games will generally go from 5 to 15 minutes.

Tee K.O. is basically a spin on Drawful, where players draws pictures and slogans on t-shirts. Players vote for the winner, much like Quiplash.

Guesspionage asks one player a trivia question about percentages, and then the remainder of the players have to guess whether the actual answer to the question is higher or lower than what the first player said. One example might be, “What percentage of people were convinced that something was wrong with them after Googling their medical symptoms?”

The final new one is Fakin’ It, which is the game we currently know the least about. It’s supposedly about catching your friends out in lies, but that’s all we know at this stage.

The third Jackbox Party Pack was due for release before the end of spring. I’m sure I’ll end up playing it on a stream with some readers before Christmas regardless, although it’d be nice if it came out before the AAA madness that is October and November.