When Kellogg’s and the Dr. Pepper Snapple company announced they would be collaborating on a pair of soda-flavored Pop-Tarts, we scoffed. You should have heard the scoffing. It was Olympic-level scoffing. Now, having eaten them, we feel a little bad about it.

Before we begin, a couple of items we must address. Firstly, we have already delivered a verdict on Pop-Tarts in general:

So what of Pop-Tarts as a whole? It’s hard to ignore the attraction of a “breakfast” food that comes in its own dog food preserving container. They’re quick. They’re easy. They are self-contained. The question here is are “quick” and “easy” really the attributes we should be celebrating in a snack aimed at the most important meal of the day?
Sure, why not? Who has time for breakfast anymore? It’s a busy world, you blink and you’re dead. These might be horrible, but there is no blinking involved. There’s Kellogg’s new slogan right there. Pop-Tarts — F*** Breakfast.

Kellogg’s still hasn’t taken us up on our slogan suggestion.

Secondly, we will be referring to the limited edition A&W Root Beer and Orange Crush Pop-Tarts as soda-flavored for this review. While we understand that different regions call soda by different names, if we called these Pop Pop-Tarts they would have some of us imagining toaster pastries filled with grandpa, which is a very unpleasant thing to think about. Feel free to swap the words in your head as you read.

In a desperate attempt to get people to eat some damn Pop-Tarts, Kellogg’s and Dr. Pepper Snapple have joined forces to create a pair of flavours that don’t sound all that appealing, especially in the context of breakfast.

Crush Orange isn’t too much of a stretch. We have orange juice for breakfast. Orange juice is sometimes served in plastic cups. Plastic cups are made from chemicals, just like Crush Orange.

A&W Root Beer is delicious, but it’s not something one pairs with a steaming hot pile of pancakes. Then again, eating Pop-Tarts indicates a distinct lack of pancakes, so it’s really a moot point.

The reasoning behind this strange union is simple. Flavour crossovers are hot. Pop-Tarts, ironically enough, art not. Hot Topic does not carry a range of Pop-Tart themed clothing. Television shows are not making constant Pop-Tart references. They are not hip, cool, tubular or whatever else the kids are saying these days. Fleek? We’re not sure what fleek means, but Pop-Tarts don’t seem very fleek.

And so we get Crush Orange (or Orange Crush) Pop-Tarts and A&W Root Beer Pop-Tarts. If Kellogg’s is aiming for relevance through co-branding, they are aiming kind of low.

But Snacktaku is not about marketing strategies and brand synergy. We’re about eating things. Watch us do just that in the video atop the post, or let hours of Adobe Premier editing go to waste and read on. 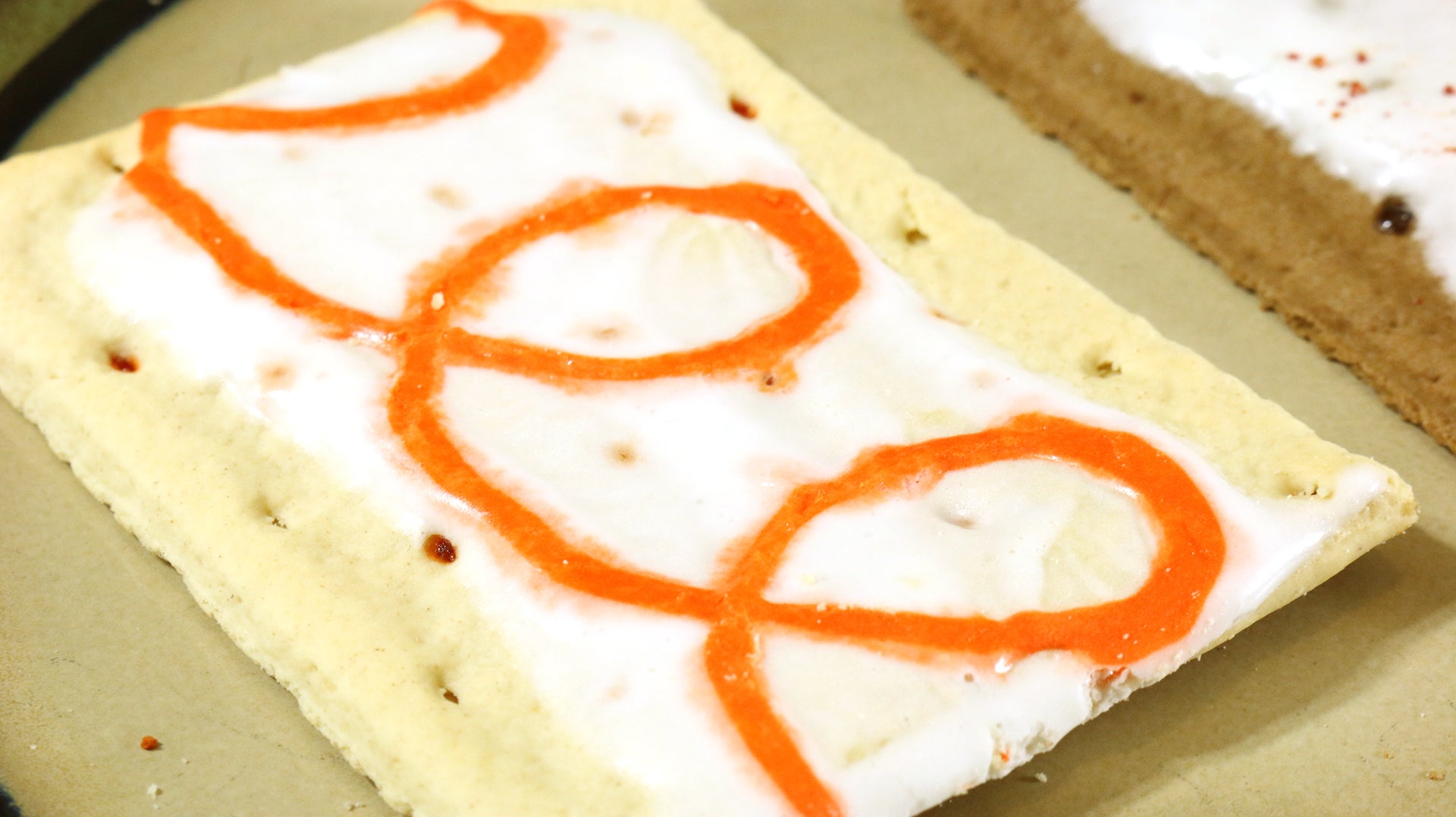 There is something about the colour orange and dough that doesn’t do much for the senses. Red and dough brings to mind cheery pie or turnovers. Brown and dough evokes cookies or chocolate chip muffins. Orange and dough feels like a warning of some sort. A warning that only gets more insistent when the Orange Crush Pop-Tart is cracked open. 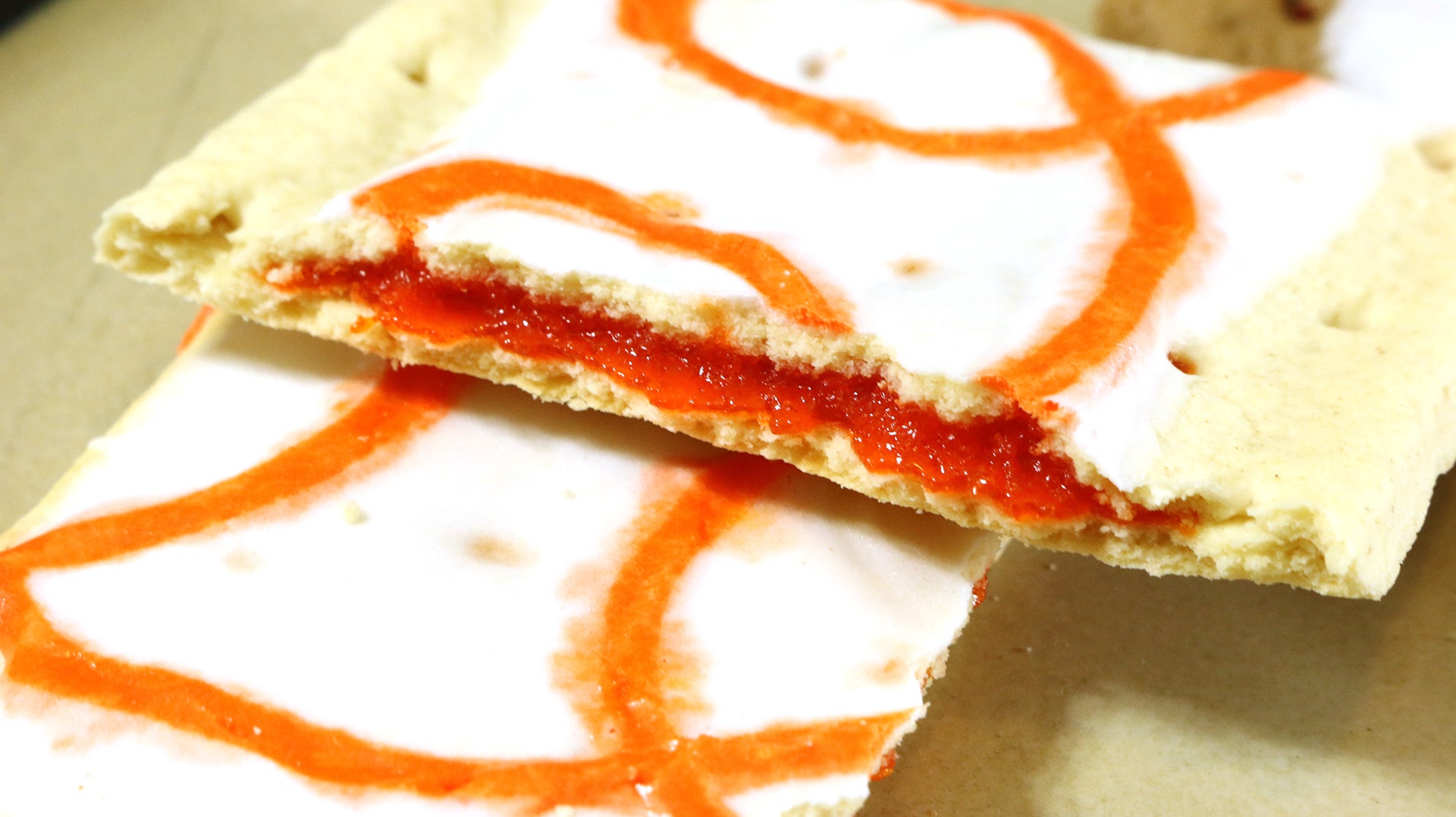 Now that we get a closer look, they sort of look like Pureed Caviar Pop-Tarts.

Thankfully, one of the earliest steps in becoming a fictionally-certified snackologist is disconnecting sight from taste. Once safely ensconced within our mouths, the Orange Crush Pop-Tart was actually quite tasty.

Vibrant and sweet, the citrus taste shines through, along with a sparkling illusion of carbonation. Uncooked the Orange Crush Pop-Tart can be a bit cloying. Toasted inside a toaster over because someone decided it was better than a slot toaster, the Crush Pop-Tart’s crispy pastry and warmth offset the sweetness nicely.

It just goes to prove you shouldn’t judge a book by its cover. It might be filled with flowing orange gel. 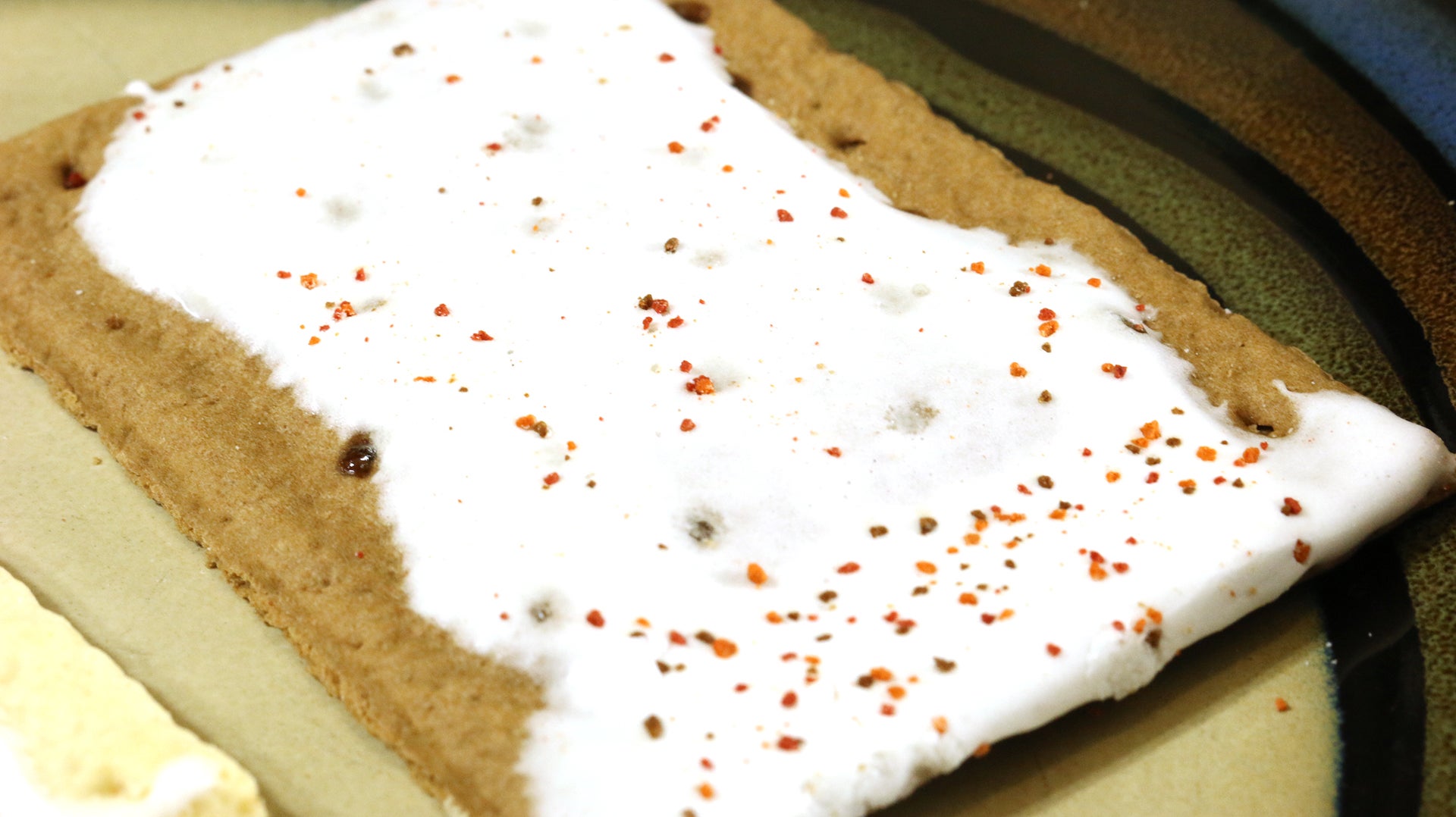 Again we have a visual disconnect. Despite the sprinkles valiantly evoking the colours of the A&W logo, this Pop-Tart looks like there should be something chocolate inside.

There is nothing chocolate inside. Without even breaking the crust you can smell the warm, welcoming scent of root beer. It’s the sort of smell that makes anything smell inviting, a fact taken horrific advantage of by the Texas Root Beer Viper, a completely real creature. 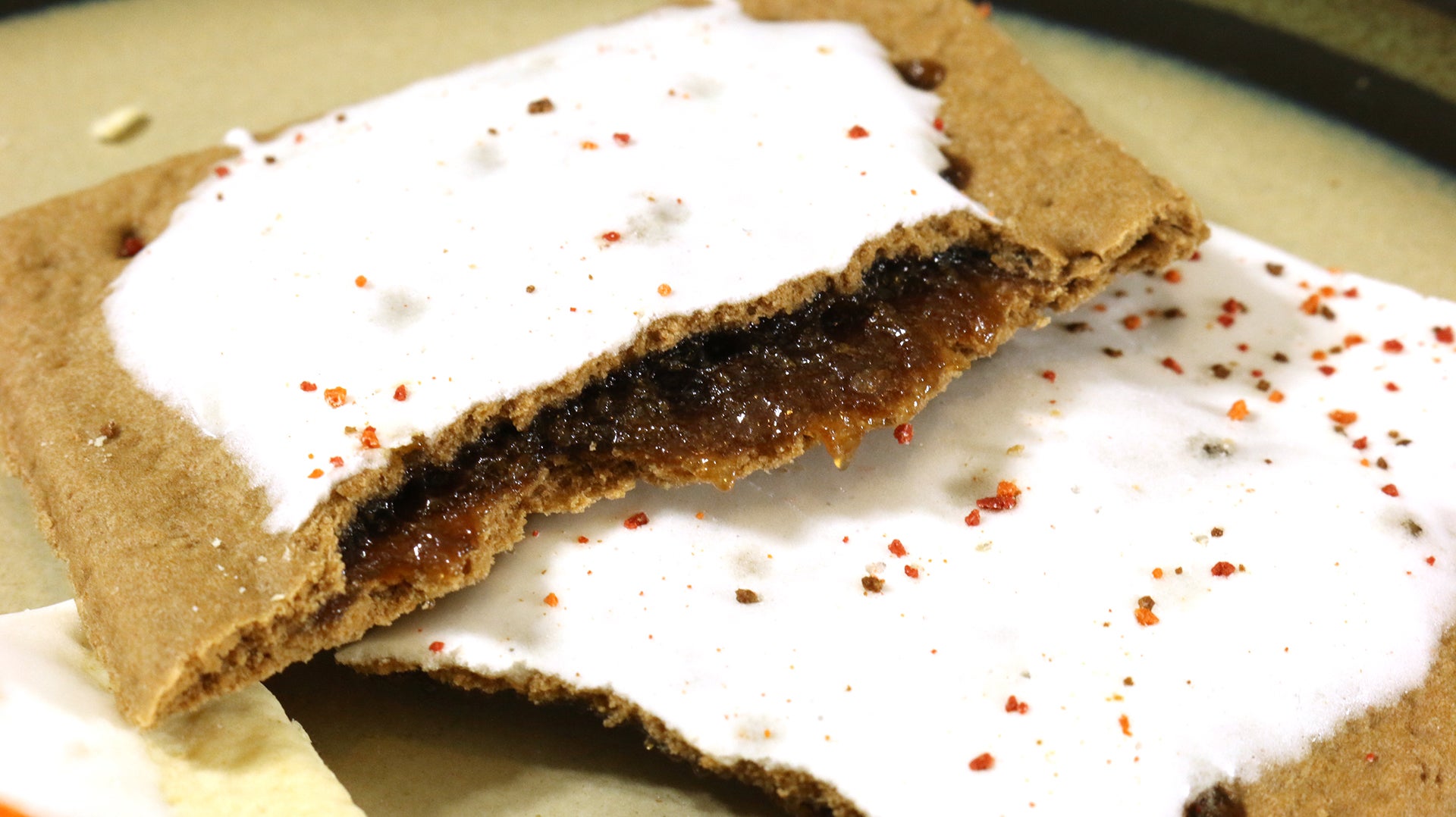 The inside of an A&W Root Beer Pop-Tart resembles minced meat or congealed gravy. Go ahead, zoom in. Imagine that flavour inside of a sweet pastry-ish shell.

Now stop imagining that, because it’s actually quite good. The filling is warm and a little spicy, sweet but not too sweet. There’s a bit of a bitter aftertaste to these innards, which seems to become more pronounced with the application of heat. This is a Pop-Tart to eat uncooked.

One caveat — crust eaters, folks who nibble the edges of a Pop-Tart away in order to leave behind a filling sandwich, beware. The root beer flavour mingles with the bland crust to produce a strange sort of mild waxy, spicy effect. If they made root beer flavoured Pepto Bismol, it would taste like that.

A&W Root Beer and Orange Crush Pop-Tarts are a delicious attempt to generate excitement for a product that really doesn’t need any excitement generated. Pop-Tarts have been around a long time. Many of us have been eating them all of lives. The thrill may be gone, but that doesn’t mean we don’t enjoy them in our mouths.

That said, a little soda role-play now and then never hurt a snack relationship. It’s OK to get a little adventurous, as long as we can come home to frosted strawberry or brown sugar at the end of the day.