I Love You, Resetti, Nintendo's Most Helpful Arsehole 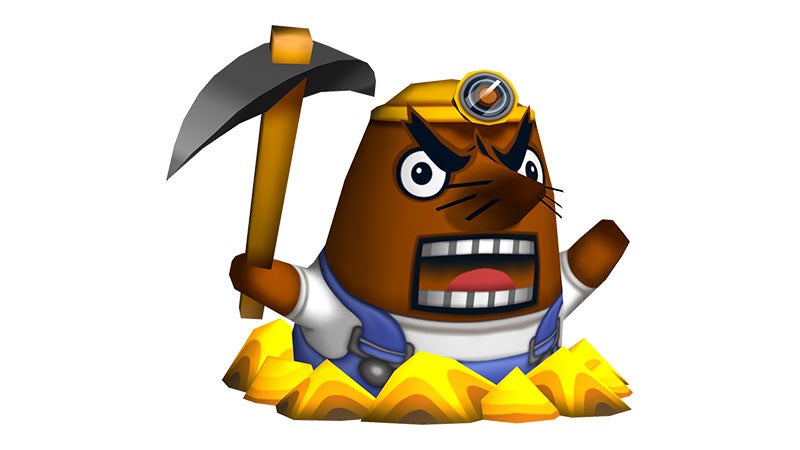 Of all the weird and wonderful characters in Nintendo's pantheon of talking animals/plumbers/fungi, I think I like Animal Crossing's Resetti the best. Even if he is a big ol' meanie.

If you haven't played the series, Resetti is a mole that you sometimes encounter. Not in your regular daily activities of walking around, fishing and paying off a mortgage. No, Resetti only appears when you have done something wrong.

Debuting in the first Animal Crossing game, which was released on the N64 in Japan and the GameCube in the West, Resetti comes from a time when modern luxuries like autosaves and restore points were sci-fi pipedreams.

If you wanted to save your progress in Animal Crossing — a game utterly reliant on a persistent world and integration with a console's internal clock — you had to visit a specific point on the map and manually save it. Failure to do this before turning your game off would result in the loss of everything you had done since your last save, which could be hours of tedious busywork and chit-chat.

Now, so far, this is common for nearly all older games. They were made in harsher times, and everyone who grew up in the 80s and 90s will have a story about corrupted memory cards and power outages destroying their progress in a game.

The thing about all those other games, though, is that the tragedy of a lost save was never acknowledged by the game itself. It was a cold, technical aspect of development completely divorced from the fiction you were indulging in on the screen. Lose a save? Go to a quit menu without saving? The game didn't care. Nobody did. You will suffer for your mistake/misfortune, developers seemed to be implying, and you will do it alone.

But Nintendo cares. And Resetti, in a very parental way, was how they showed it.

If you ever reset a game of Animal Crossing without saving, or there was a blackout, or your little brother tripped over a power cord, you'd lose that progress. Such were the technical limitations of the time. But the next time you booted up the game?

Resetti was there. He knew that the game had been shut down without saving, and was waiting for you. As you leave your house for the first time that day, he bursts out of the ground, introduces himself and explains that he's there to remind you to make sure you always save your game.

God help you if it happens again, though. 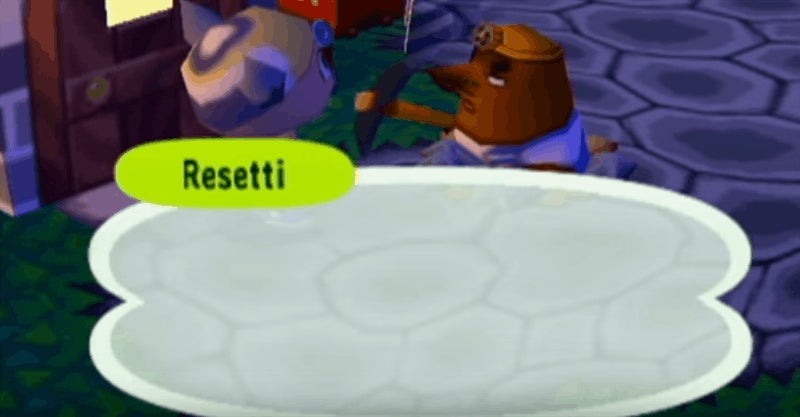 Because repeat episodes will bring him back. And each time you do, he gets angrier. He'll shout. Call you names. Ask you to repeat lines back to him, promising you'll be better at remembering to save.

Push him far enough and he'll even do this:

He is a complete arsehole. An intrusive, name-calling piece of shit who bursts into your games, interrupts your activities with his lengthy sermons and shouts at you like you're a small, dumb kid.

He gets so rough that, after feedback from his antics in his first few outings, when it came time to release Animal Crossing: City Folk, Nintendo felt they had to include a warning message about the guy in the instruction manual, which read:

It is important that players save before switching off the Wii console in order to retain data after each play session (see Saving Data, above). If players switch off without saving, the character Mr. Resetti may appear upon restarting.

Mr. Resetti's purpose is to teach players the importance of saving. However, parents should be aware that his personality and tone of voice, while intentionally humorous, are authoritative and may be disturbing to young children.

Fuck 'em! Mr Resetti shouts because he cares. And through him, Nintendo shouts because the people responsible for making this game care. He's breaking the fourth wall because Animal Crossing was a game so pedestrian and so weirdly put together that Nintendo could turn what in any other game would be a warning message into a character, thus transforming a prompt you'd normally gloss over — like an epilepsy warning, or a legal rights notice — into something that is drummed into your brain.

As a 22 year-old playing Animal Crossing on a GameCube, I thought he was a funny annoyance. As a grown-arse man who is now a parent, over a decade later, I've got a new appreciation for Resetti. Sure, he's funny, and an interesting technical anomaly. But really, his only reason for being in your game is to make sure that you don't inadvertently do something that will cause you pain.

Yes, his methods are...unorthodox, but if the message gets through, he's done his job. If there are kids out there who have avoided the agony of lost progress in a game like Animal Crossing, then it was worth all the tirades, regardless of the warnings Nintendo had to put in its game releases.

I don't want to come out and turn this into some ponderous take like Resetti Is A Dad Just Like Me, because he's too one-dimensional for that, but I can at least now appreciate the sacrifices he's making in terms of perception in order to achieve his more altruistic aims. 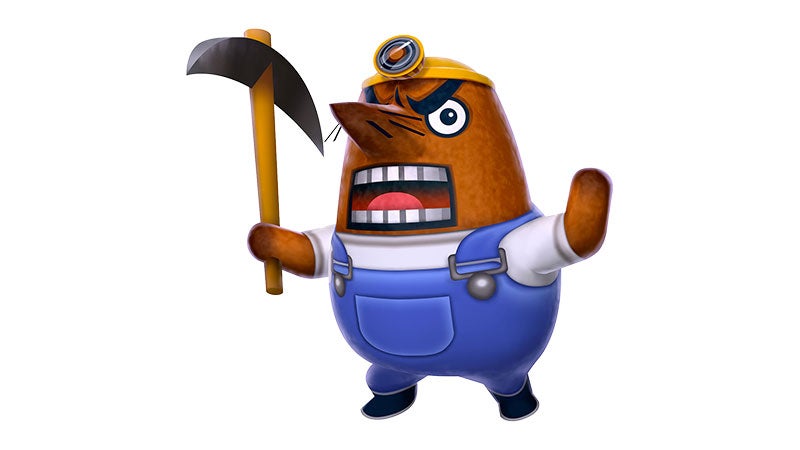 After his psychotic outbursts in the first game, Resetti's importance to the series has declined alongside technical advancements. As first handhelds and now consoles have developed easier ways to save and manage progress, such drastic measures are no longer necessary.

Indeed, by the time New Leaf was released on the 3DS in 2012, he'd been relegated to an indulgence, appearing once as a reminder and then giving players the option to turn him off entirely. Even in this reduced form, though, and with technology having almost moved on past the need for him any longer, Resetti finds a way to remain both relevant and funny.

Later in New Leaf, players can build a Reset Surveillance Center. If they do so, Resetti will start appearing again every time the game is quit without saving. Only, as a nod to the times, he'll now interact with you, asking just why you quit without saving.