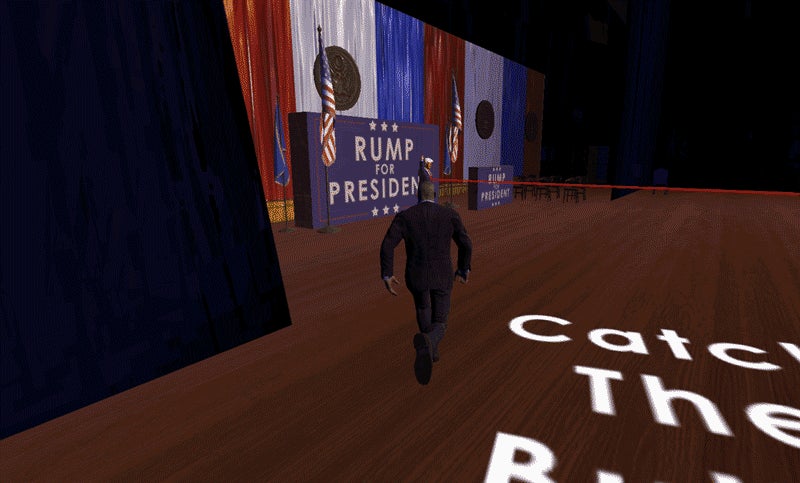 Mr President is a game for people who are irreverent, hate Donald Trump or feel strongly about ragdoll physics. It's also a game for people who would take a bullet for Donald Trump and don't understand jokes or capitalism. Released yesterday, Mr President asks, "Can you take a bullet for the soon to be President of the United States of America?" In it, you are the bodyguard Dick "Rock-Hard" Johnson, sworn to defend President Ronald Rump from, for example, stray bullets. Your job is to jump in front of bullets, bombs and other weapons that find their way on stage at a Rump rally. 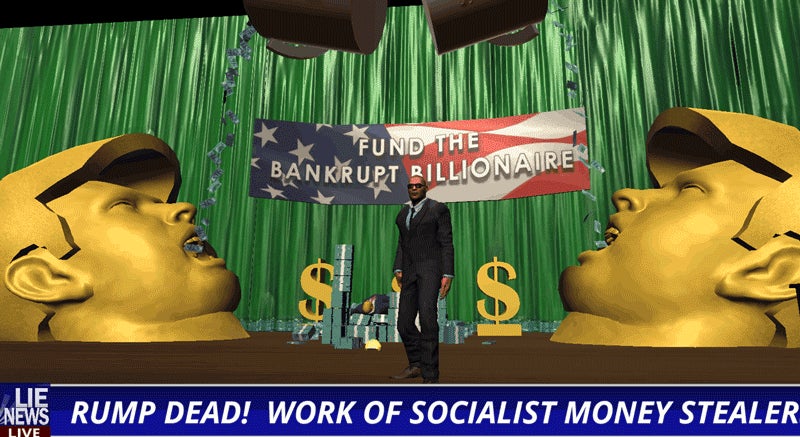 There are over 50 "assassination attempts" available for your character to save Mr Rump from. Diving in front of Mr Rump, capoeira-style kicks, back flips and "hip hop dancing" all either help your cause or... don't. When you don't save him, his hair falls off in a bloody head explosion. Your bodies careen toward piles of money or campaign posters, flopping around for a few seconds before going dramatically limp. Death is caused by "socialist money stealers" or "liberal media".

From the developers' words:

Liberal media has rigged the election and tarnished his glowing public image, now they are trying to end his life. You need to leap, flip, fling, roll, and many other verbs to get in between Rump and certain death. If Rump dies, Who is going to pay for your Netflix sub? How are you going to pay for your lifetime of student loans or over inflated medical bills? Where will you get the money for another dumb physics game? YOU BETTER SAVE THE MAN OR YOU DON'T GET THE MONEY! It is your American duty to protect, serve, and live by the mighty dollar, because money is the only true sign of someone's worth.

Predictably, YouTubers are going crazy over Mr President, gleefully trying to save (or not save) him from assassination. In a video today, YouTube celebrity Markiplier screams as he repeatedly throws himself in front of Rump or wrestles him in a giant cage:

Game Developer X notes that "All characters and events from the game — even the ones inspired by real people — are entirely fictional". You can find Mr President on Steam for $US5.99 ($8).