A Look Back On Metal Gear Rising’s Last Boss, Who Wanted To Make America Great Again 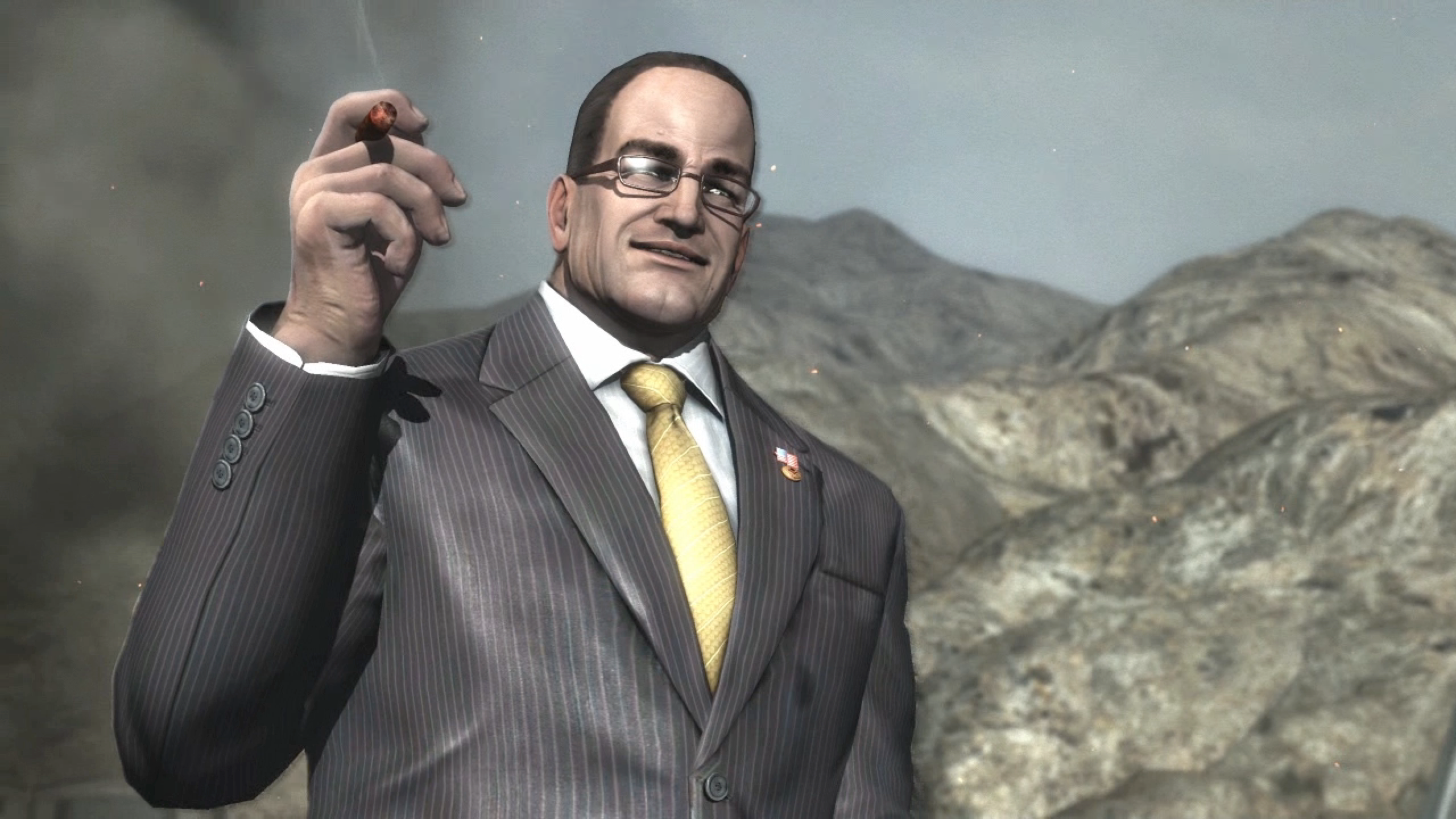 America’s Election Day is tomorrow. America might elect a jackarse to be their leader, and I am terrified. To cope, I recently played 2013’s Metal Gear Rising: Revengeance and fought a power-crazed politician using my cyborg ninja powers.


Senator Steven Armstrong is not a good man. He is the financier of two private military companies, the main conspirator in a plot to brainwash children into child soldiers and an instigator who exploits Americans’ hot tempers by inciting war in the Middle East. Revengeance positions him as a symbol of crass warmongering and deliberately invokes phrases and rhetoric from the second Bush Administration when talking about his plots. Characters fear that his manufactured conflict will come to fruition because “the media and the public won’t be able to resist” and caution each other to “remember WMDs in Iraq”.

In the game’s climax (spoilers, obviously), he orchestrates an attempt on the president’s life during a trip to Pakistan. Our hero, Raiden, thwarts these efforts and confronts Armstrong in person. As he espouses his philosophy, he begins to sound like a certain billionaire turned Republican candidate. He is openly derisive of the “pansies” in Washington, seeking a world where “the law changes to suit the individual, not the other way around”.

Revengeance was released three years ago, before Trump began his nightmarish rise toward the Oval Office. Armstrong is a fictional exaggeration of American excess. He is a cartoonish caricature of the worst elements of US politics. Yet, here he is spouting Trump’s campaign slogan: “Make America Great Again.”

Both are masters of capitalising on American fears. For Armstrong, it is the spectre of oversea threats. For Trump, it is a slew of domestic boogeymen that speak to the anxieties of many in his voting block: The fear of rapist Mexicans, hidden Jihadists and others who threaten to take the US away from hard-working, white-bread Jim McGee.

One of the terrifying commonalities between Armstrong and Trump is the fact that they both seem unstoppable. Trump persists after a host of controversies and public statements that should paint him as unelectable. Raiden cannot hurt Armstrong. The Senator has advanced nanomachines that keep him sheltered from physical trauma.

The sad truth at the core of Revengeance is that defeating a foe like Armstrong might mean abandoning certain principles you held dear. Throughout this election, I have watched with dismay as Trump supporters committed violence against their fellow Americans and cheered on happily as Trump has derided minorities and protesters. Throughout it all, liberals have insisted he deserves an equal voice and that his supporters deserve my empathy. But I am not obligated to turn my cheek and tolerate racism, homophobia or fascism.

Enough is enough. One of the things that allowed Trump to thrive was a damnable complacency that insisted he deserved a spot at the head of the table of public discourse. This is a fallacy that he had handily exploited to spread a message of hate and intolerance. At one time, I would have urged this patience and insisted with misplaced idealism that we should at least hear him out. No more. This idealism is a lie. It is a trap. We should not abide the ramblings of fools and madmen simply to be polite.

Throughout Revengeance, Raiden insists that his sword is a “tool of justice”. He is a protector of the weak. He holds onto an idealistic notion of samurai justice. His rival is Samuel Rodrigues, a cocky swordsman who dismisses Raiden’s idealism as impractical in the modern age. During the fight with Armstrong, the Senator breaks Raiden’s sword. He symbolically crushes the representation of Raiden’s idealism. It is only by fighting with Sam’s sword that Raiden can defeat Armstrong.

The world of Revengeance is inescapably violent. Raiden can only prevail by cutting down his foe. Luckily, we don’t need swords to defeat Trump, just votes. I’ll do my part with a resounding “No, we won’t” that echoes loud and, after tomorrow, hopefully cows the bad-haired would-be tyrant into irrelevance. But I can’t do this alone. I need people to fight back with me.