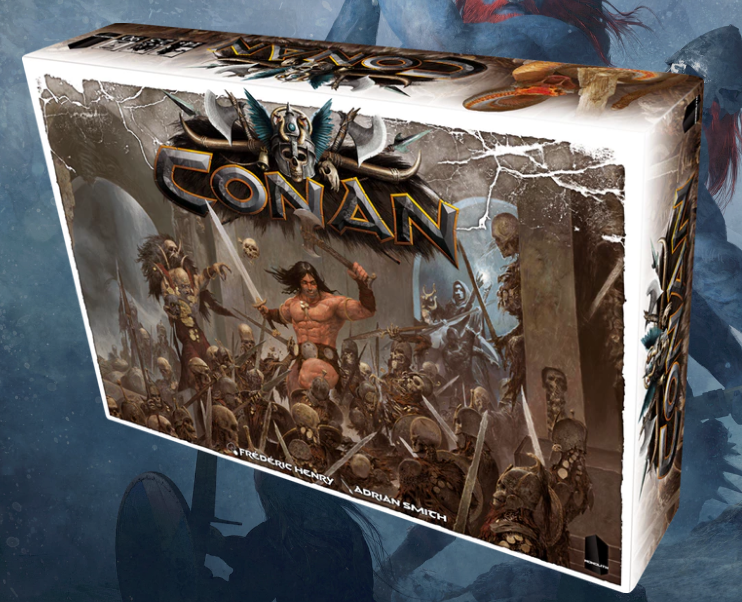 A woman who helped market a wildly popular upcoming Conan board game, which raised over $US3 million ($4 million) on Kickstarter in 2015, is speaking out against its portrayal of women.

In a November 12 essay titled "Grab 'Em By The Board Game", Cynthia Hornbeck, who marketed the game for Asmodee, the company that is distributing the game, says women in Conan are treated as "objects". The game was made by Monolith Edition. Conan's art and gameplay, in her view, reflect toxic stereotypes about damsels in distress and sexualised, submissive female characters in the fantasy genre.

Hornbeck told me the game appeals "to obviously a male demographic that wanted to feel empowered by objectifying women".

In an email, a Monolith representative told me that the game is just derivative of "US pop culture". Its tropes about women, he said, come from "the "sword & sorcery" style" Robert E. Howard's books ("as true as possible from the books"), and John Buscema's Conan comics. Hornbeck's beef is that those tropes shouldn't be glorified in a modern blockbuster board game.

Conan is one of Kickstarter's most successful gaming campaigns, with over 16,000 backers, and has been delayed twice. Pledge rewards are just now being shipped out after developers surpassed the expected October 2015 delivery date by over a year. It's an asymmetrical strategy game for two to five players, targeting consumers who are over 14 years old. It sells for $US120 ($163). Named for the eponymous novel series, Conan is rooted in writer Robert E. Howard's pulp fiction sword-and-sorcery world. And along with its 1932 publishing date comes 1932 ideas about women. Pliant servant girls dot his fantasy landscapes. Conan is a grizzly, muscled warrior who famously conquers what he pursues, be it an enemy, a hot young lady or a hot young enemy lady. In "The Frost Giant's Daughter", Conan pursues a near-naked woman — an enemy — who runs from him, screaming for help. He grabs her and attempts to kiss her before she calls on her father, the Frost Giant, to attack Conan. Howard writes, "With a scream and a desperate wrench she slipped from his arms, leaving her single gossamer garment in his grasp." The final twist is that she's a "lure", meant to draw in men whom her father and brothers would slay.

Howard has difficulty introducing female characters without referencing their breasts, often "ivory", within the first sentence or two. An introduction of the character Belit begins, for example, like this:

Belit turned toward Conan, her bosom heaving, her eyes flashing. Fierce fingers of wonder caught at his heart. She was slender, yet formed like a goddess: at once lithe and voluptuous. Her only garment was a broad silken girdle. Her white ivory limbs and the ivory globes of her breasts drove a beat of fierce passion through the Cimmerian's pulse, even in the panting fury of battle.

This is the kind of thing you might expect from a Conan book in 1932, but it's not what Hornbeck believes needs to be in a 2016 Conan game. Take the presentation of Belit in the game. She is the queen of the Black Coast and Conan's lover. Also, she's the only playable female character in the board game. Of your heroes, three are male and one is Belit. Here's how she looks: 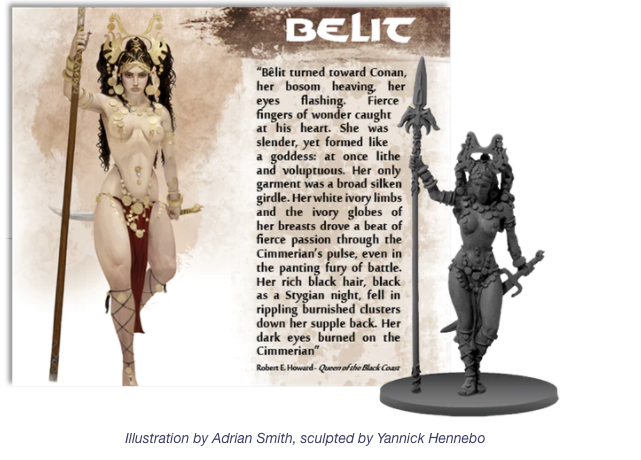 In the game, Hornbeck writes, Belit's "mechanical function is to make the men better". Conan's developers clarified that, in addition to her "Leadership" skill, which lets her give orders to her guards, she also has a "Support" skill that provides buffs to her party. In Hornbeck's view, that means her job is essentially to "follow Conan around and boost his abilities. Because that's what women are good for in this world: being fucked by men and making those men feel good." As the only female playable character, her focus on supporting men's role in combat, paired with her barely-there clothes, comes off very 1932 here in 2016.

When asked to comment on Belit's role in a Conan party, a Monolith representative told me that, while she's less powerful than Conan, she's as strong as the two other playable characters.

More urgent to Hornbeck is the cover of Conan's heroes' rulebook. Conan stands imposingly over what Hornbeck describes as a "prone damsel in jeweled panties". She appears to be passed out. 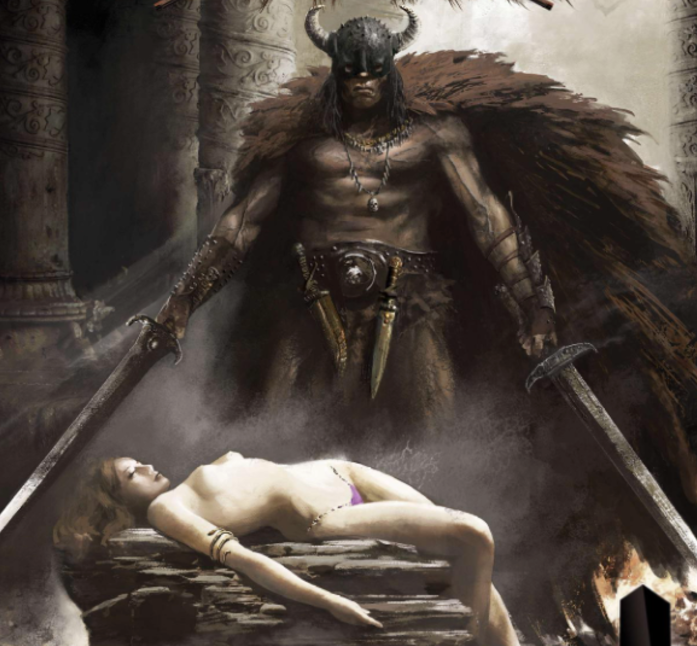 Hornbeck objected to the heroes' rulebook cover and said that others agreed with her. "Why is she naked?" she wrote. "Why is she on some sort of rock bed/altar and glowing, so that we the gamer focus on her physical beauty? To me, she looks like his prize, a reward for his violence with which he can do whatever he wishes - including grab her by the crotch and rape her before she's regained consciousness." She described the scene as "the scene of or before a rape. And you, my friend, are going to take on the role of the rapist."

The makers of the game disagree. A representative from Monolith forwarded a picture of its inspiration, a Frank Frazetta painting.They maintained that it depicts Conan as a good guy. "The bad guy is now missing from the cover but everyone knows that Conan is a hero and is here to save the women and not to attack the women." Asmodee declined to comment. 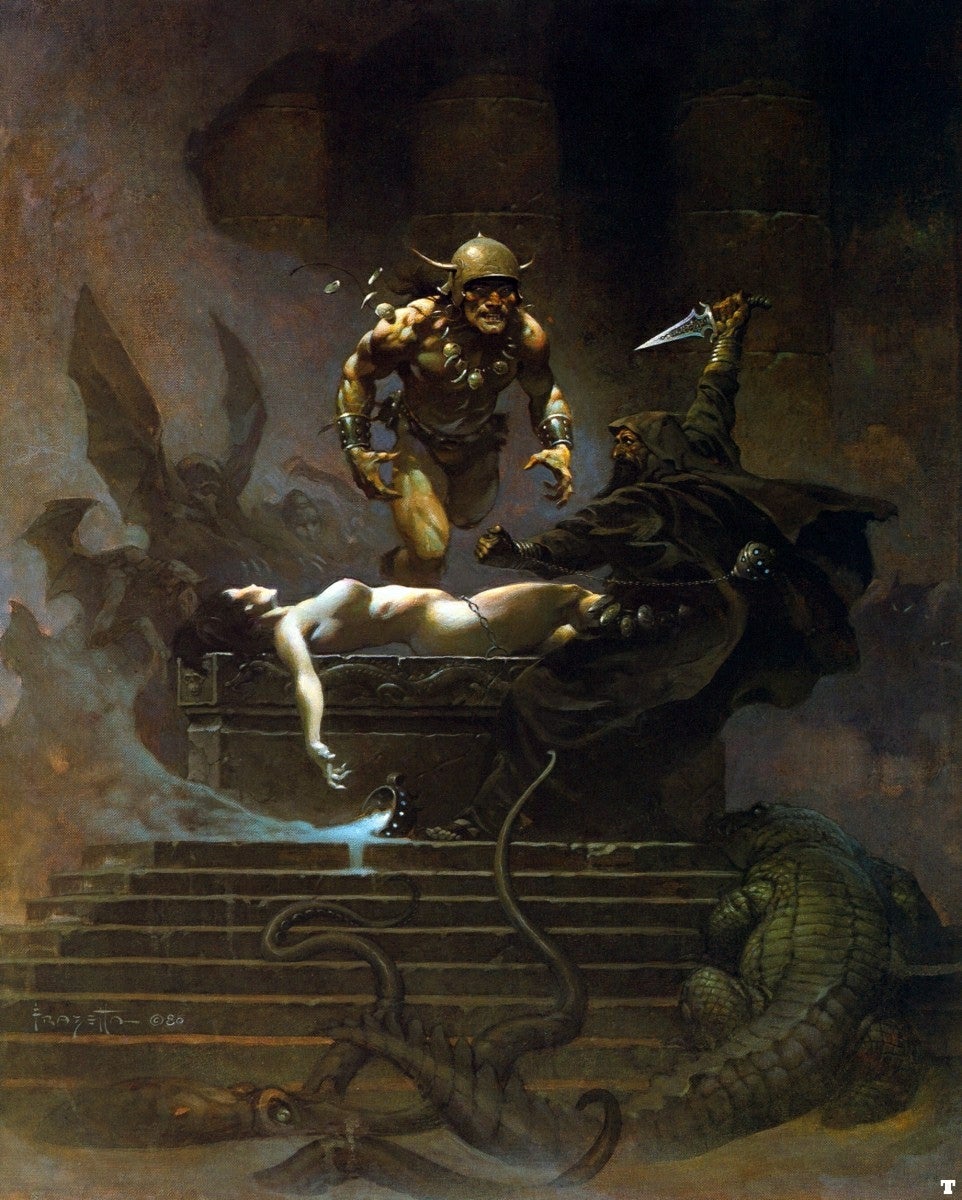 Of the Heroes' Rulebook cover, Hornbeck says, "This cover actually represents a scene from one of the game's scenarios, in which Conan and his friends must rescue a princess who is about to be sacrificed by the Picts. In that scenario, the princess token/figure is treated exactly as if she were an object. She has no abilities. You can even toss her across the board."

Hornbeck argues that depictions of women like this are the result of an industry that advertises to a mostly straight, male audience. According to Hornbeck, over 81 per cent of Asmodee's social media following is male. For other board game companies she's familiar with, that percentage has never gotten below 90 per cent. She estimates that 95 per cent of the board game reviewers she's worked with have been male.

A recent Shut Up & Sit Down review draws attention to Conan's grab for straight men's sexual interest, noting that there are 1.25 boobs per Conan game scenario:

There have been several Conan board games in the past, with similar male/female power relations, marketed to similarly male demographics. I asked Monolith whether the game may alienate potential female customers, and they responded that the game's depiction of women "are parts from US pop culture". But Hornbeck says that it's time to start speaking out it. Just because the game's using Robert E. Howard's world and characters and is being marketed to men, she told me, doesn't mean that it needs to cater to a power fantasy:

"Part of this comes from a deep tradition in which board games are designed to let men live out these fantastic roles they can't live out in real life," Hornbeck told me. "Part of that is living in a male world in which women are objectified and/or secondary. This is a historic thing." She asks designers and buyers who agree with her to be more deliberate architects and consumers of their games.