election 2016hillary clintonpoliticssecond lifevirtual worlds
To sign up for our daily newsletter covering the latest news, features and reviews, head HERE. For a running feed of all our stories, follow us on Twitter HERE. Or you can bookmark the Kotaku Australia homepage to visit whenever you need a news fix.

As real-world Americans flock to voting stations in order to get the 2016 US Presidential election over with, virtual versions of Hillary Clinton and Donald Trump take to the streets of Second Life for last-minute campaigning and carousing.

The recreation of the Trump mansion I visited earlier this year may be gone, but both viable US Presidential candidates maintain a healthy presence in Linden Labs’ ageing virtual world.

Though deserted earlier this morning, the unofficial Hillary Clinton campaign headquarters is slowly filling with supporters as the day progresses. 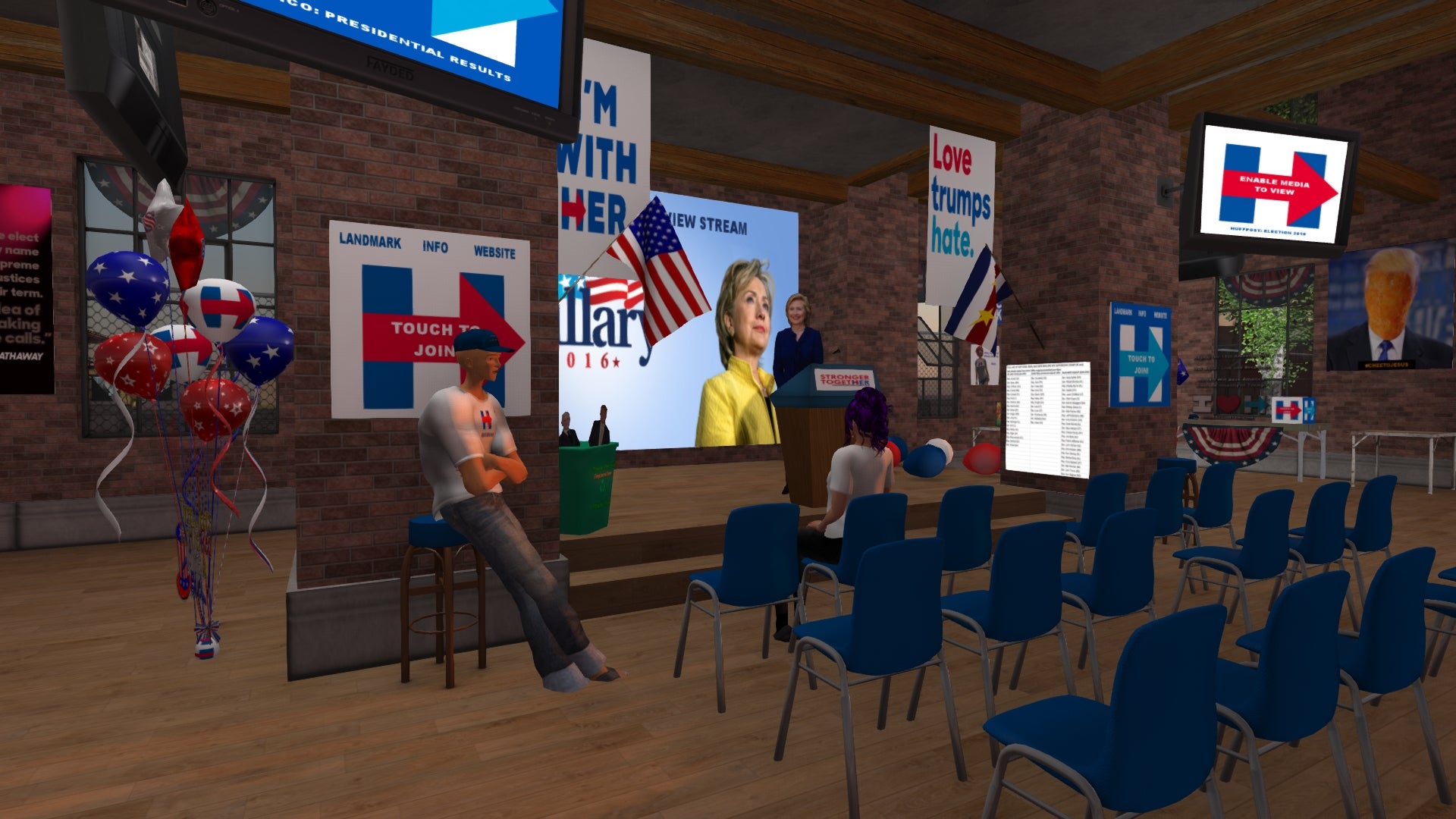 Avatars showing their support for the Democratic nominee linger in the seating area in front of a cardboard cutout of Clinton. During my first visit a tiny skunk avatar ran through the area tossing beer bottles before disappearing as quickly as it had appeared. 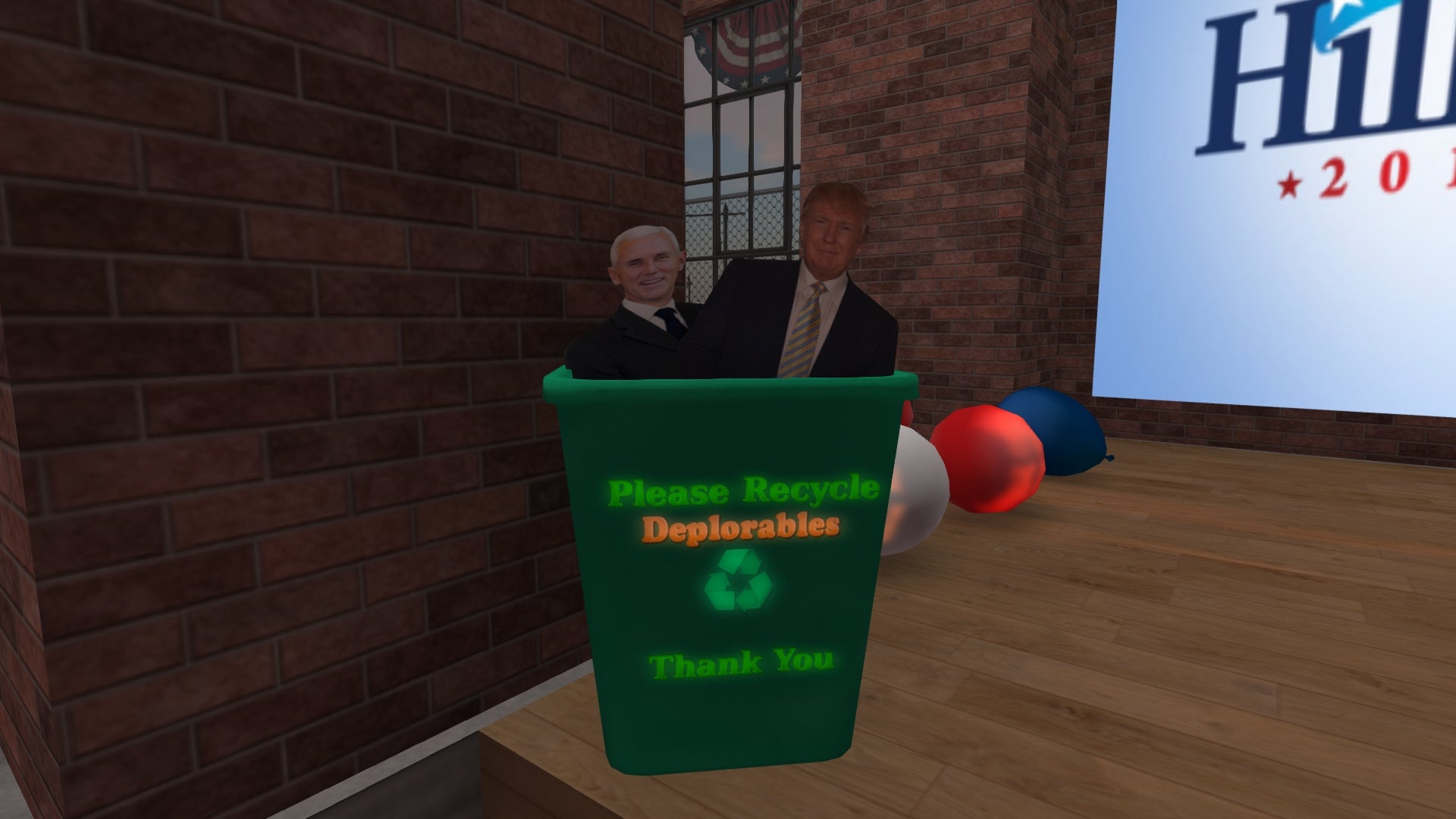 Shortly after the skunk incident, a special guest appeared at Hillary’s headquarters: A somewhat reasonable facsimile of the presidential hopeful herself. 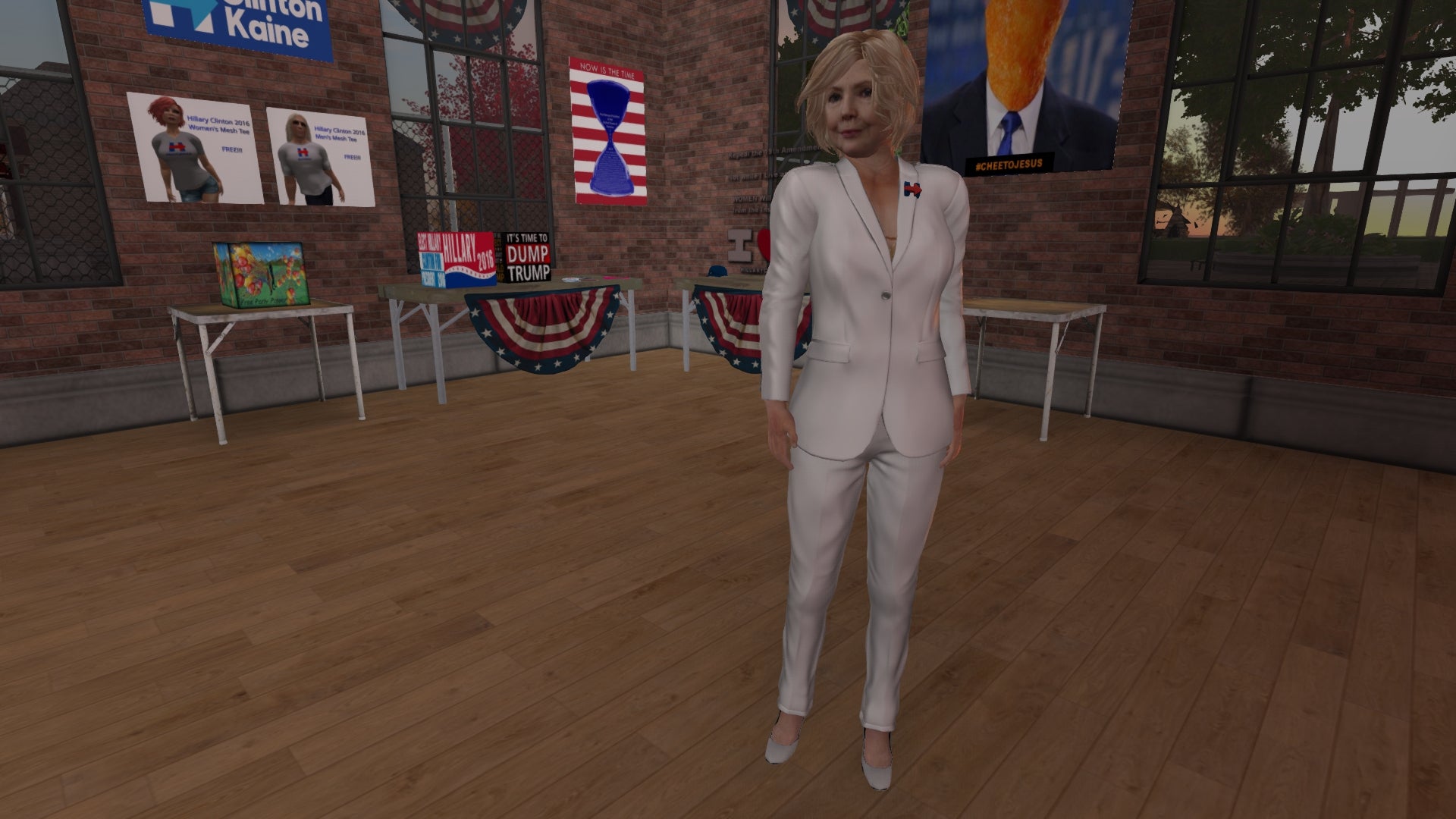 There is something off about the Clinton avatar. It might be the chin. Or the hair. Or a combination of factors that lead us screaming into the uncanny valley. 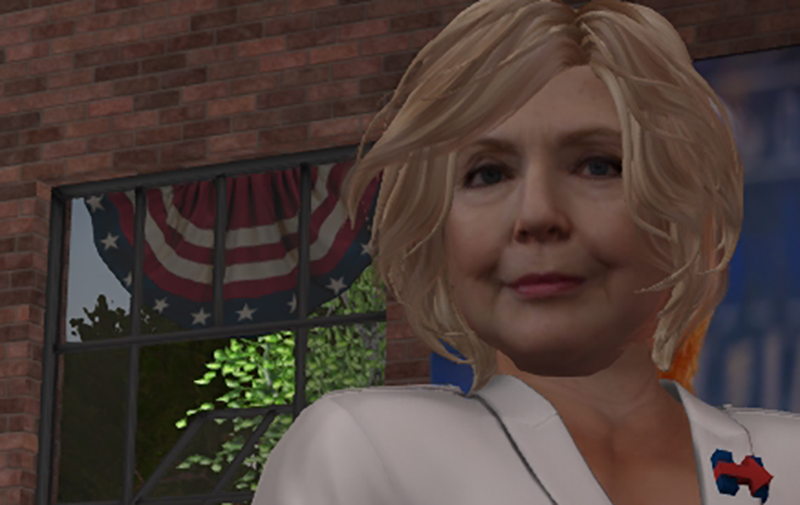 Uncanny Hillary is also the face of a special election night party happening this evening at 2:00PM AEDT. 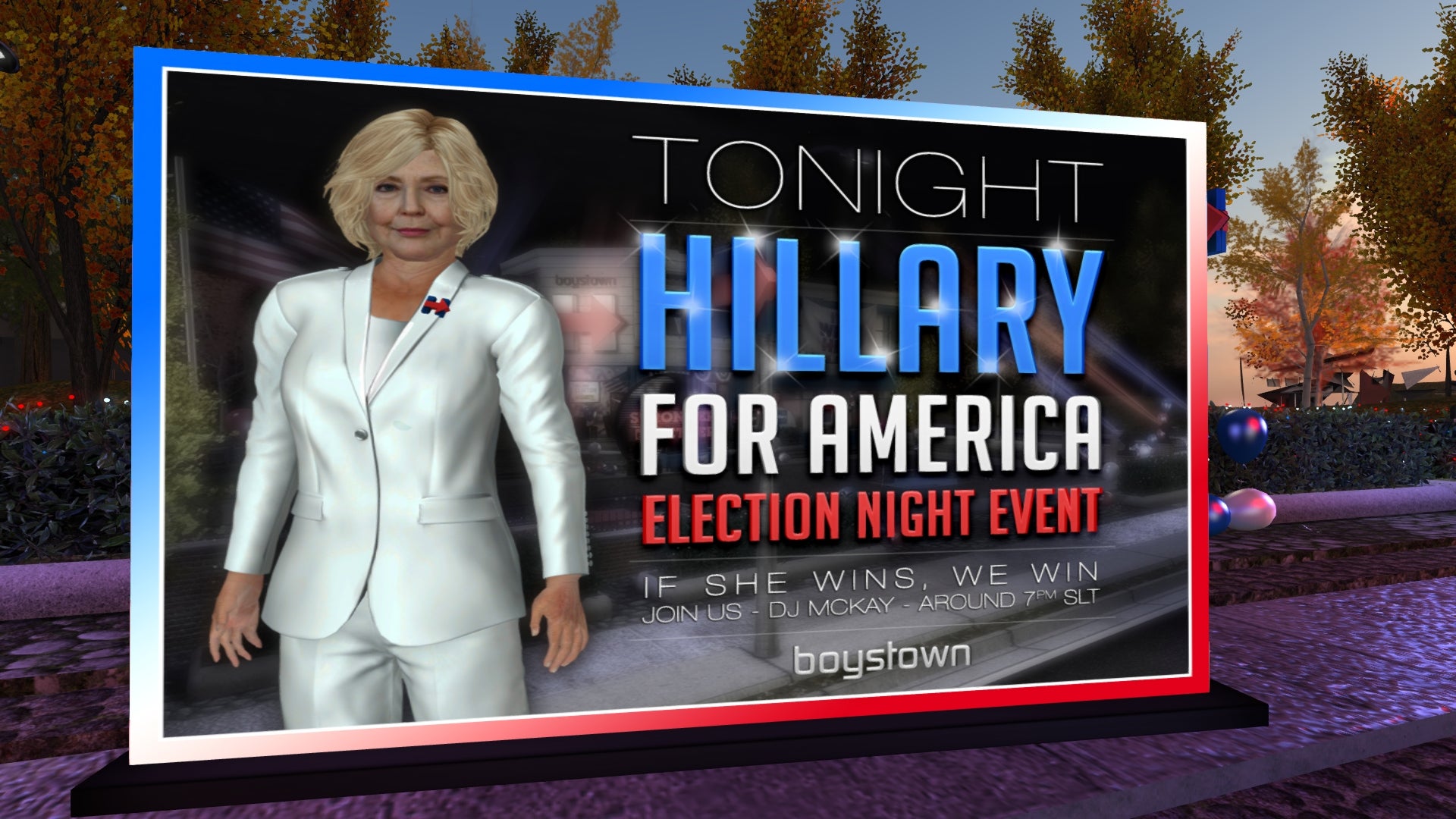 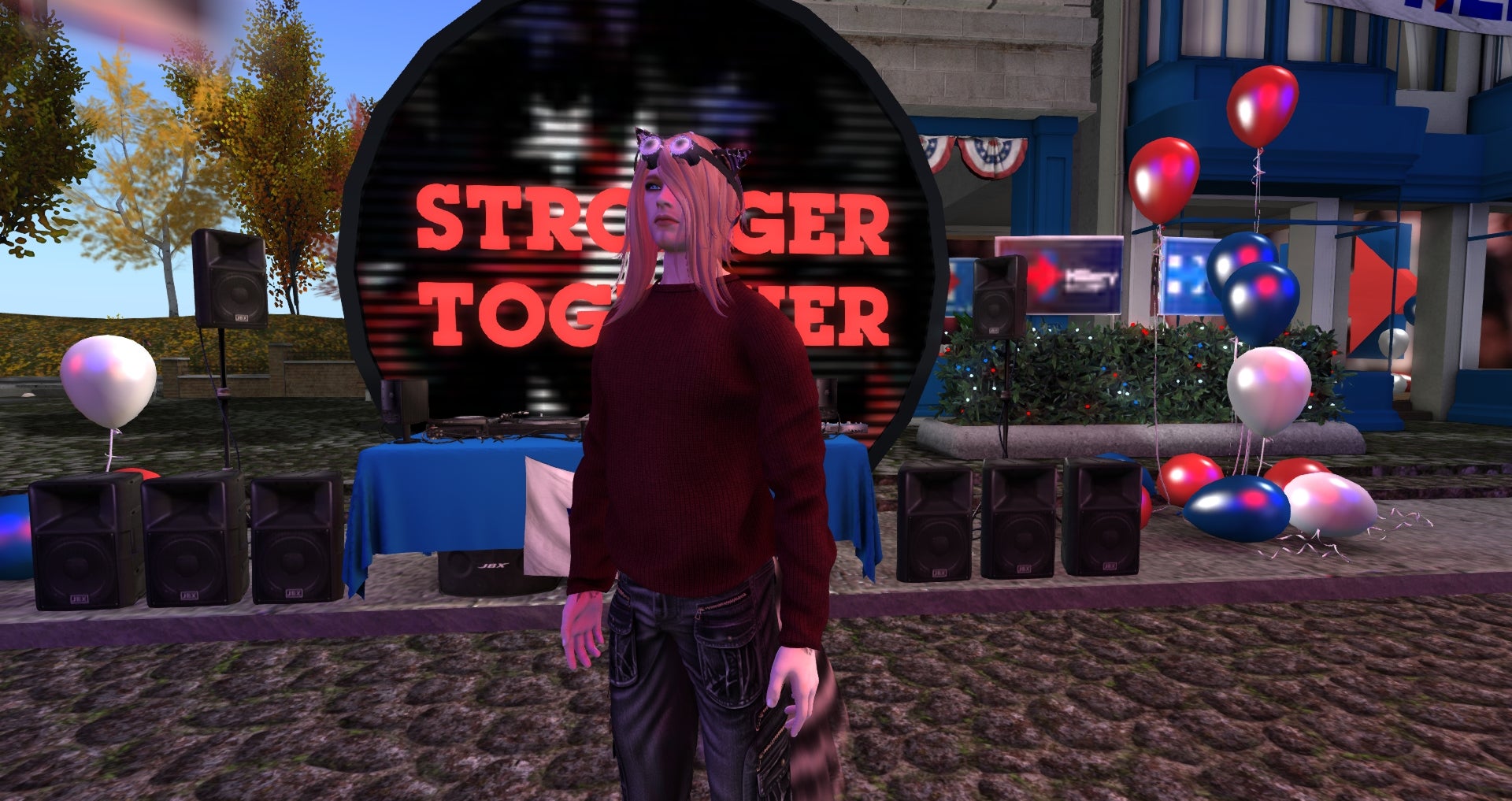 Your intrepid reporter, wearing a sweater because Cecilia told him his dragon T-shirt was horrible and had to go.

Meanwhile, at the unofficial Trump headquarters, which was notably empty following the Republican candidate’s nomination earlier this year, things are also beginning to pick up. 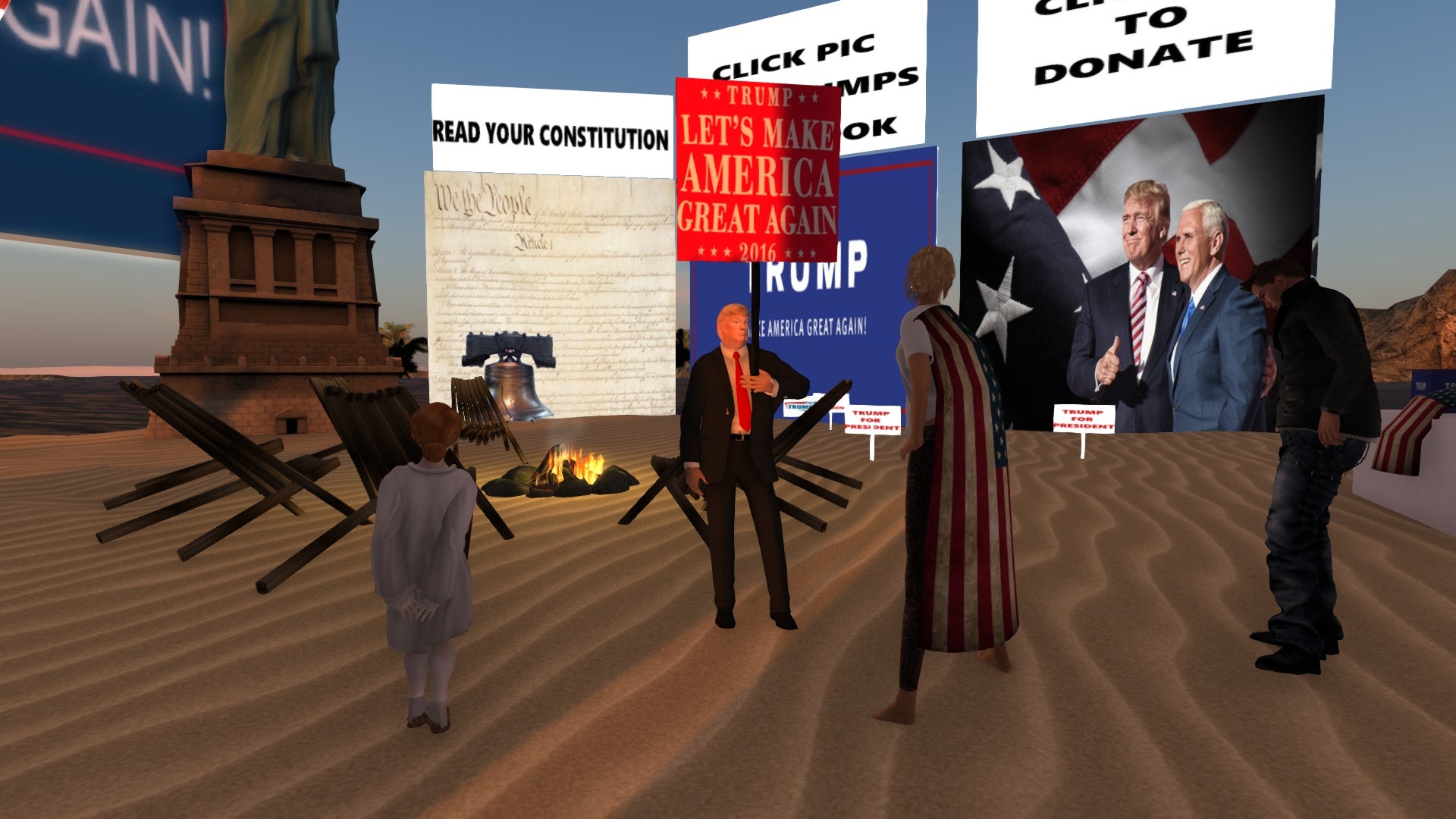 When I arrived, the faux-Donald himself was holding court for a small number of supporters. The avatar, as blocky and ill-defined as it is, felt a bit closer to real life than Second Life Hillary, though the hands could have been a bit smaller. 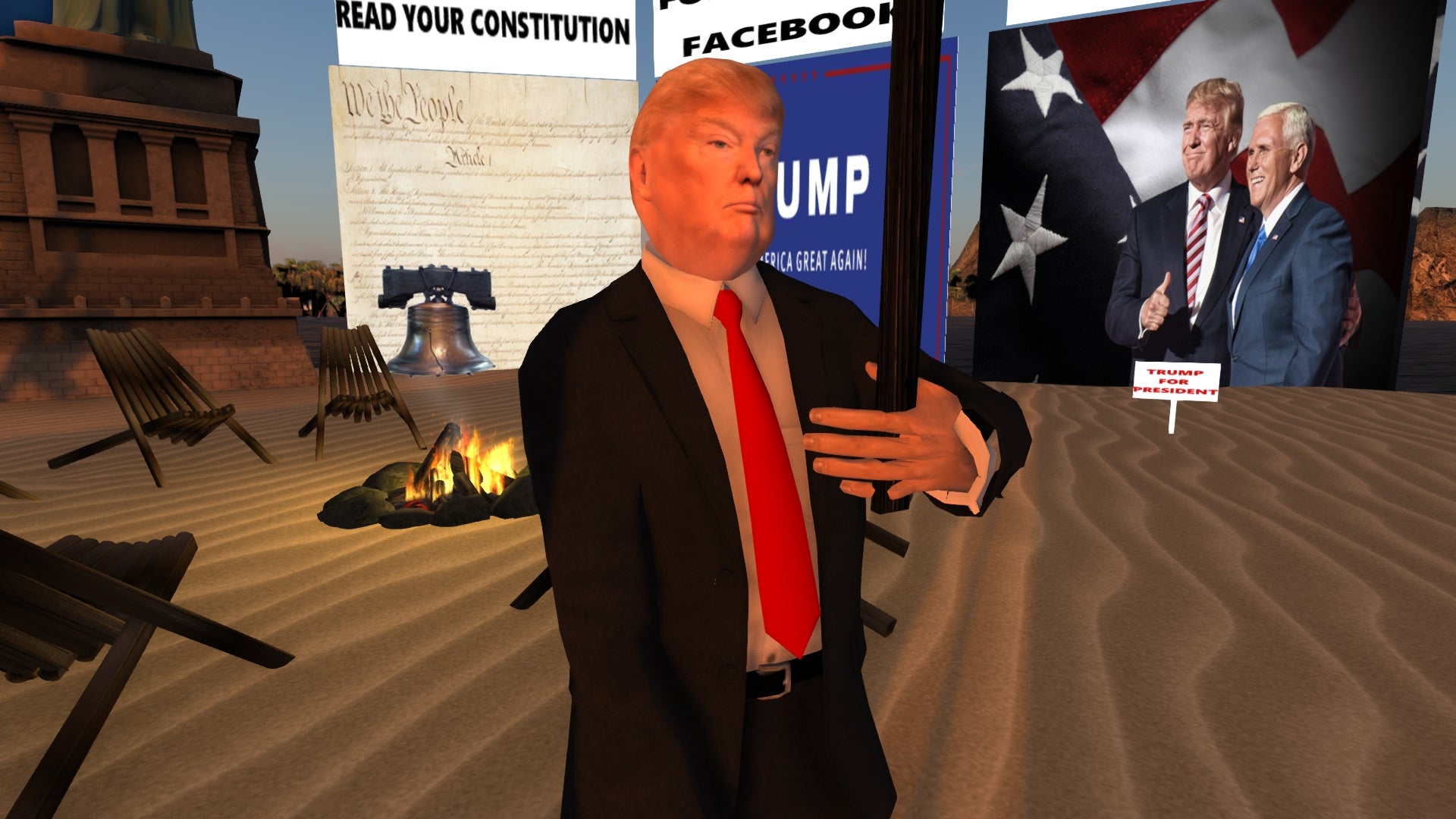 Where the Clinton SL campaign has an official-looking building, Trump holds court on a strip of sandy beach decorated with the Statue of Liberty, the Liberty Bell, a campfire and various bits of literature for those curious about the campaign. It’s clear virtual Trump is aiming for the non-crafting Second Life resident vote.

Slightly more active was the Trump Pub, a cosy little bar where a variety of Trump supports (and I am guessing folks just looking to cause a stir) were animatedly discussing the voting process. 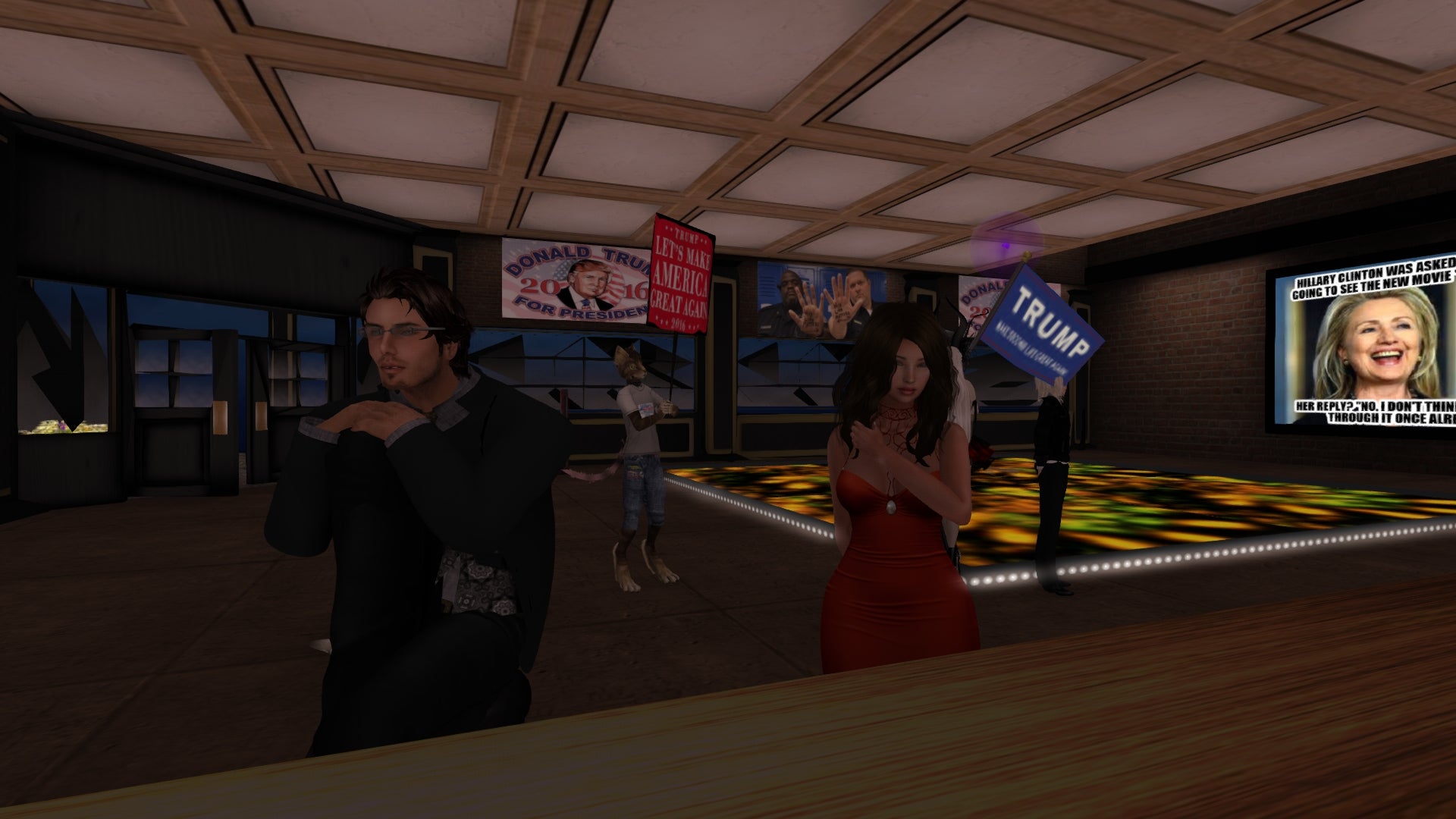 Though the walls were dotted with harsh attacks on Clinton, everyone seemed pretty nice. 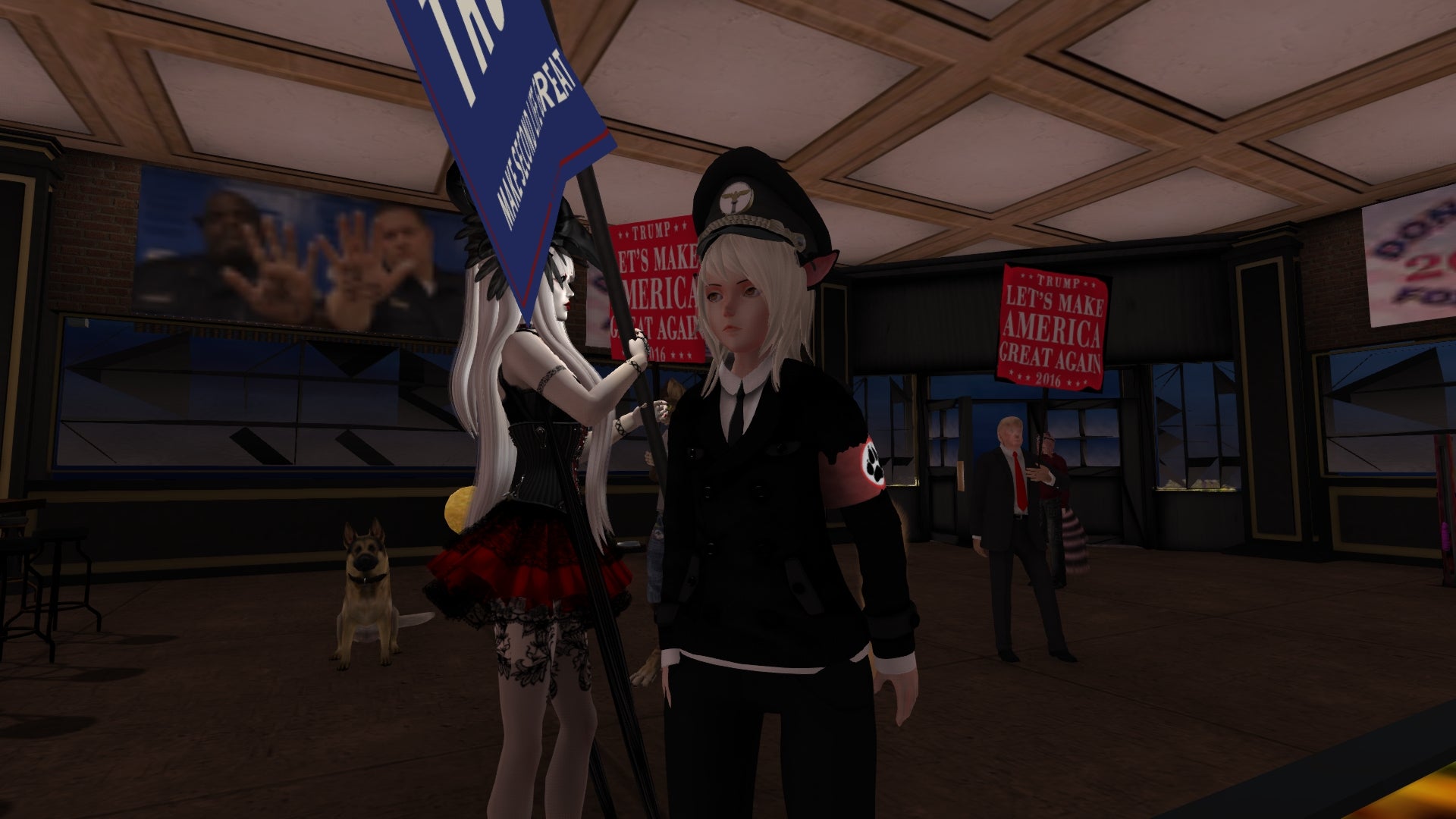 As my tour of the Second Life Presidential election headquarters and satellite locations wound down, I stopped by the Hillary Clinton headquarters for one last picture, only to find a familiar face standing outside. 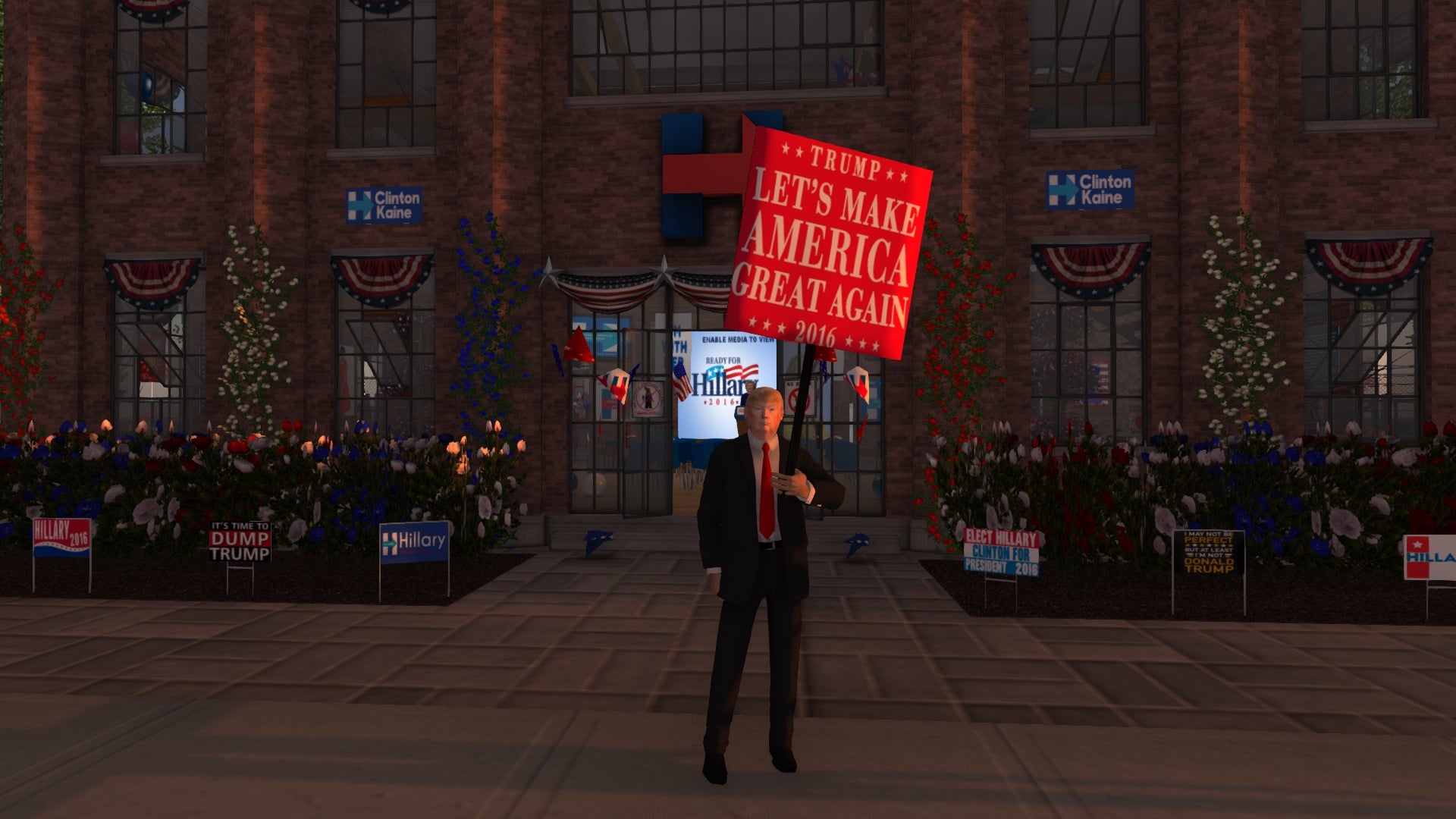 Over the course of the past half hour or so, a small crowd, maybe seven or eight people in total, have gathered outside the Hillary headquarters. Some tell Trump to leave, that he’s not wanted there. Others question why the player supports Trump. Someone accuses a Hillary supporter of voting for the Democrat simply because she is a woman. Someone calls Bill Clinton a rapist. It’s pretty much any given day on Facebook over the past several months, only there’s a virtual chicken standing nearby. 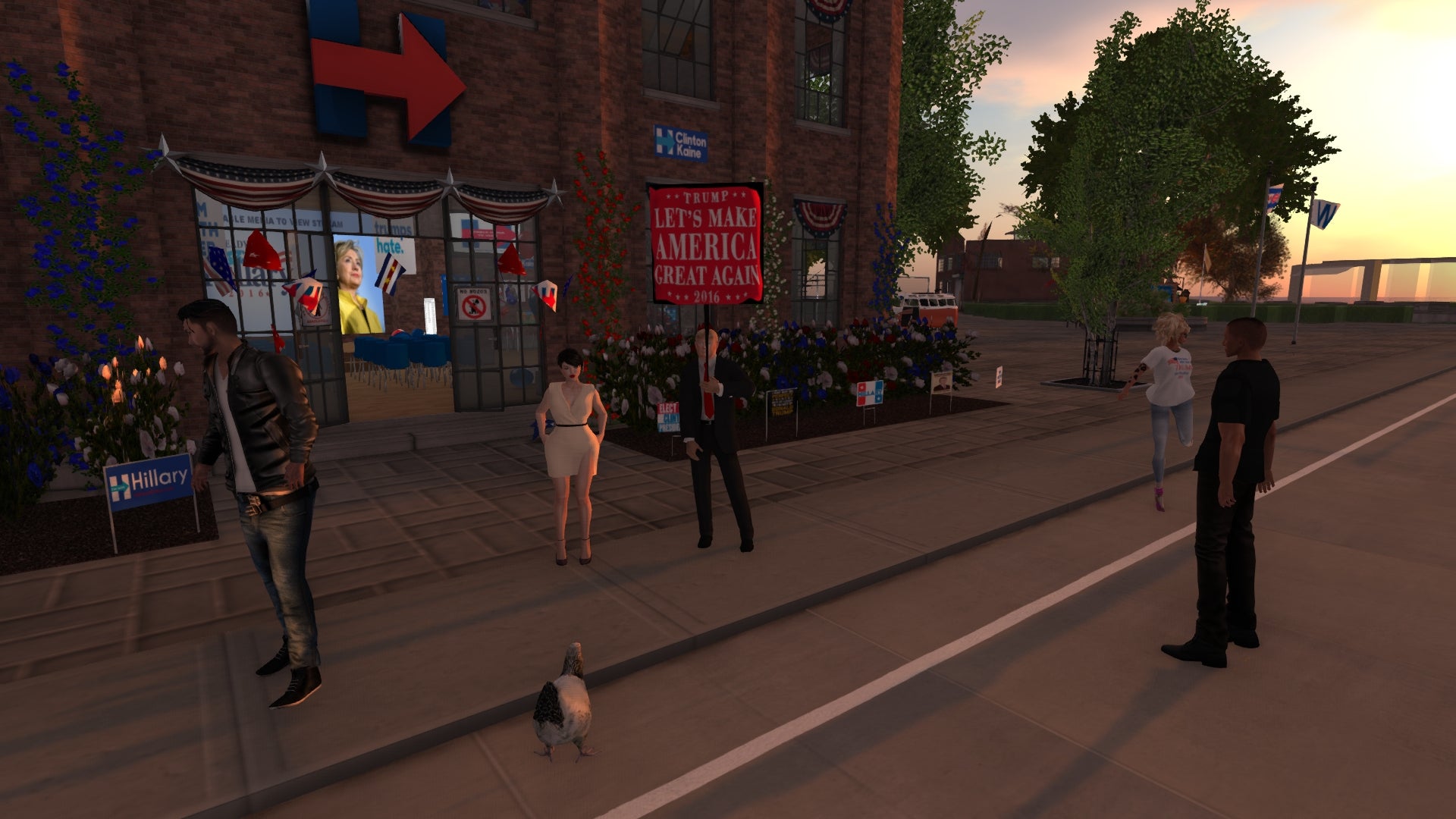 Nothing bad could come of this.