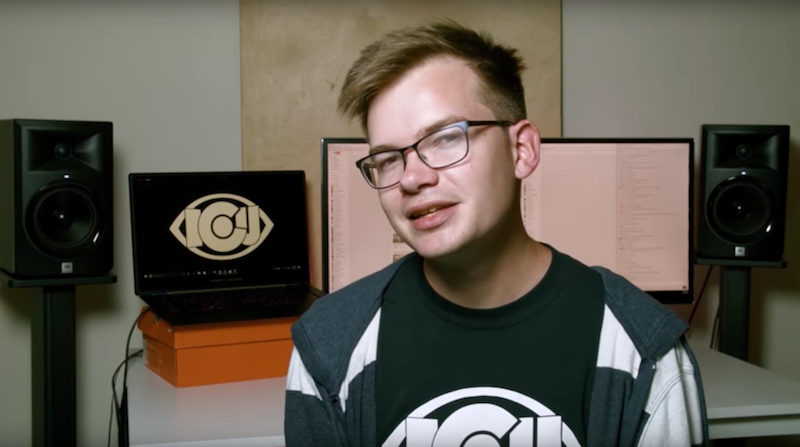 Beloved YouTuber Criken is being sued for allegedly backstabbing the co-creator of his upcoming horror game, ICU. The suit was filed last Friday, three days before the game closed out its successful Kickstarter campaign, which raised over $US82,000 ($107,229).

Keenan “Criken” Moismann’s popular YouTube channel features funny moments from games like Left 4 Dead and Dark Souls 3. Offline, he studied game development at the University of Southern California’s prestigious Games Program until earlier this year. Moismann is being sued by one of his USC game design classmates, his former roommate Zachary Suite. The ex-roommate alleges that he did more coding on ICU than anyone else.

Moismann told Kotaku Suite’s claims are “factually incorrect, frivolous and meritless”, but did not comment further. Garv Manocha, a fellow USC student and I.C.U. “collaborator”, credited on the Kickstarter, echoed the same statement.

The world first heard about ICU in September, when Moismann announced on his YouTube channel that he’d spent the last year and a half making the PC/Mac game, an “interactive horror game show”. The premise is great: A live, real-life Twitch.tv audience throws challenges at the player, a contestant on a horror game show, who is presumably streaming themselves.

In his announcement video, Moismann explains that he “pitched and led a team of over 30 students working on it”, referring to USC’s advanced game development class. The idea, he added, “was born from you guys, the viewers, who have changed my life”.

What Moismann doesn’t mention is that he didn’t pitch, design or code the game himself. Suite co-created the game, which Moismann, in the past, did not dispute. Suite says he made more of the game’s assets and code than anybody else. He says he was shocked that he was not informed of or involved in ICU’s successful Kickstarter campaign.

I'm aware of the claims being made against me. They are factually incorrect and I look forward to proving them wrong.

“I built the mechanics from scratch,” Suite told me over the phone. According to Suite, he and Moismann worked together to design and pitch the game for a USC class, a fact that Moismann has himself alluded to in pre-Kickstarter statements about the game. Suite allegedly coded while Moismann wrote the narrative, but complains Moismann subsequently cut him out of the game and formed ICU Games, LLC without assigning Suite co-ownership, as promised. (Between the class and the formation of the LLC, ICU team members, including Suite, went on holiday or started internships and briefly stopped working on the game. That’s when Moismann began devoting himself to the project.)

“ICU was my baby and Keenan and I co-created it together,” Suite told Kotaku. “I think this entire thing could have been avoided if Keenan simply credited me.”

In a civil complaint filed with the Superior Court of the State of California for LA County, Suite accuses Moismann of “selling and promoting” the game “without crediting Zachary Suite as a co-creator or compensating him for his creative efforts or years of hard work.” ICU’s Kickstarter and website contain no mention of Suite. The YouTube and email links on the bottom of ICU’s website lead directly to Criken-branded accounts. Upon publication, Suite is not considered a co-founding member of the LLC.

USC provides legal support for students in the Games Program, and Suite corroborates that the USC law clinic helped draw up the LLC document. Neither the USC Law Clinic director or Games Program director responded to Kotaku‘s request for comment.

A source close to ICU’s development says that they are highly doubtful that Moismann could have misled Suite into signing away his rights on the project “because of the nature of the class” where ICU was developed. He says that the ownership disagreement was, in part, a misunderstanding about how active Suite would be in ICU’s development over the winter: “Zach claims that he was removed from the project due to money and ego, but frankly many people are no longer active on the project because it doesn’t make any damn sense for non-actives to be publicly involved,” the source said. Suite filed his lawsuit one workday before the Kickstarter closed. He and his lawyer declined to comment on specific aspects of the lawsuit.

Moismann and Suite worked together on Close Your, another USC-developed game with comparable prototype mechanics and a successful Kickstarter that ended a month before ICU’s. Close Your is “the first game to use your webcam to track your blinking” while, similarly, ICU’s initial description read, “Each time you blink or look away from the action, events ingame will trigger.” Three sources close to the games claim that their Kickstarter campaigns and current development teams are not connected.

The world of game development is cutthroat, especially for people just entering the field. Success is uncertain and competition is fierce and frequent, a culture that, sources say, USC’s Games Program fosters in its Advanced Game Development course. Whether USC helped mediate or coach ICU’s warring development team is to be seen.