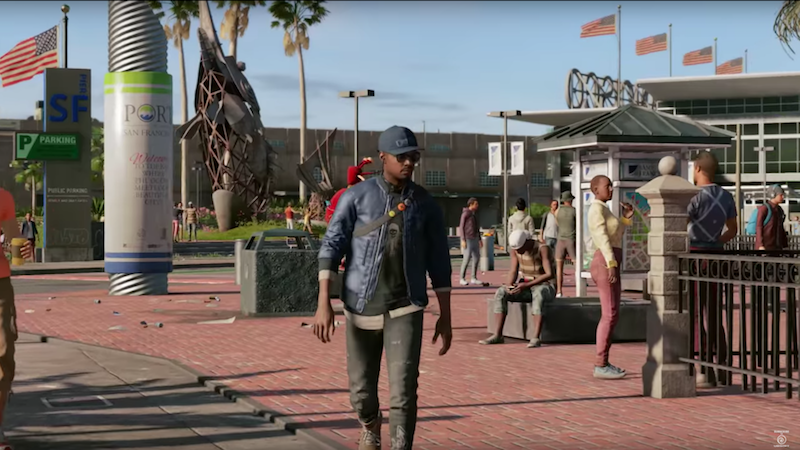 Watch Dogs 2 is all about grit, but players didn’t expect to see realistic male and female genitalia on NPCs. That’s right — flaccid, full-detail, unabashed genitalia. In a video game. Woah.

You can look, but you can’t repost — at least using the PlayStation Network. A player who uploaded explicit screenshots of Watch Dogs 2 genitalia using PlayStation’s built-in tools was hit with a month-long suspension for breaching the PSN’s “Code of Conduct”. Now, Ubisoft says they will patch the game this week so players can share whatever they want, implying that “particularly explicit” nudity will soon be removed.

Yesterday, NeoGaf user Goron2000 wrote in a post that he “accidentally blew up a few women in a back alley with a gas pipe” on a copy of WD2 he received early. He was surprised that Ubisoft had “rendered a full vagina” on one of the women he’d exploded, which he described as an “oversight”. Said vagina is surprisingly detailed (NSFW).

WD2 vaginas are not, in fact, an oversight. Just a few days ago, YouTuber Servan Demir posted a video of himself encountering a fully nude NPC wearing just a beanie, walking down the street with it all hanging out, and soon after, another video of a small hippie colony feature a fully-naked woman (NSFW):

So, graphic genitalia is a thing in Watch Dogs 2. But when Goron2000 used his PlayStation’s “share” function to post a screenshot of a woman’s vagina on Twitter (NSFW), Sony suspended his PSN account for a a week. He forwarded Sony’s note to Kotaku:

We’re writing to inform you that your Sony Entertainment Network account has been temporarily suspended.

We’ve made this decision based on your online activity in Live from PlayStation on 15-11-2016. . . We ask all our players to act decently, respectfully and with consideration for us and other players while using PlayStation Network. To make sure you understand the behaviour we expect from our community, please review the Code of Conduct here before returning to PlayStation Network. Please be aware that any further breaches of the Code of Conduct may result in a longer suspension or even a permanent ban.

It’s true that posting sexually explicit conduct is against Sony’s Community Code of Conduct. The PSN Terms of Service prohibits sharing in-game assets that are “defamatory or offensive (including anything… sexually offensive”) or anything “vulgar”, a curious word to describe human bodies, but whatever!

In an email, Ubisoft told Kotaku that they’re aware that “one” of the NPC models in Watch Dogs 2 is “rendered in a way that is particularly explicit”. It seems like maybe more than one model is hiding some detailed nether-parts, but sure, Goron2000’s viral screenshot was the most explicit I’ve seen. Ubisoft added:

While Watch Dogs 2 is a mature-rated game, we apologise and will update this NPC model to make it more consistent with other NPC models in the game in a patch to be released this week. We also are working with our first-party partners to ensure that players can continue to play and share all content from the game within the bounds of the first parties’ respective codes of conduct.

So, keeping in line with Sony’s Community Code of Conduct and the PSN’s Terms of Service, it appears that Ubisoft will be removing material that, when reposted through PlayStation, could get users suspended.