What The Hell Is Going On With The X-Men: A Comics Guide 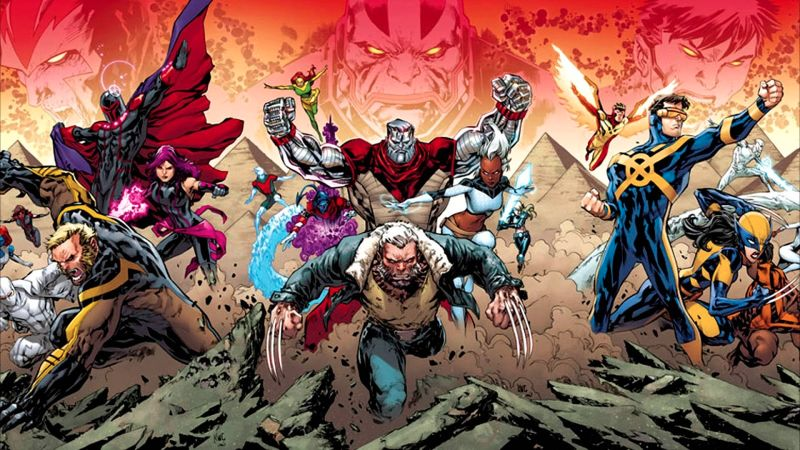 The X-Men are in a weird spot in the comics right now. So much crazy stuff has been going on with Marvel's mutants — even more so than usual — that anyone trying to make sense of what's up with the various X-Men would be overwhelmed, confused or even just irritated (especially since their current comics are kind of a mess). Don't worry, though, we're here to explain everything you need to know.

(Thought we were going to say "X-plain" there, didn't you? We respect you more than that.) 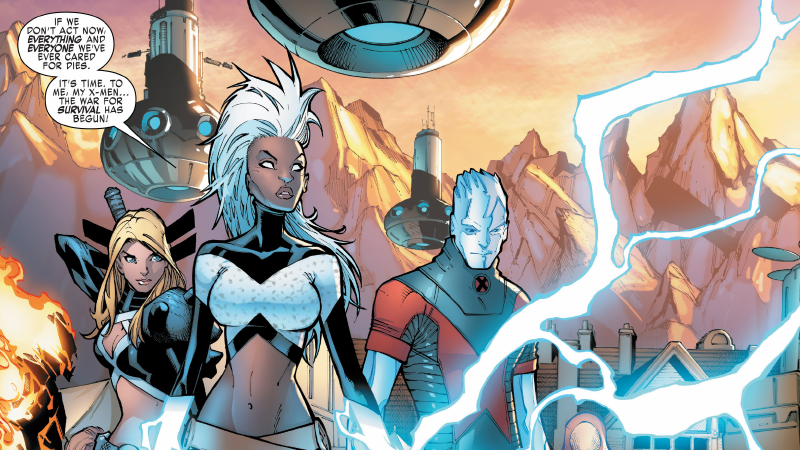 Marvel has two races of superpowered peoples: Mutants, who are humans with a special gene that "awakens" and gives them a variety of powers/physical changes/miscellany, and Inhumans, a race of humans genetically engineered by aliens who gain powers/physical changes/miscellany when they enter a gas called the Terrigen Mist. X-Men and Inhumans have generally gotten along, although mutants have traditionally been more public, while the Inhumans have stayed in their own kingdom of Attilan.

That was until large clouds of Terrigen Mists began wandering around the globe, evolving countless humans who had Inhuman DNA in their genes — and Scott "Cyclops" Summers discovered the Mists have also begun poisoning Mutants with an incurable disease that also sterilises them, drastically lowering the level of Mutant births across the world. As massive clouds of Mist are making their way across Earth, awakening new Inhumans, they're also slowly wiping out Mutantkind. (This isn't the first time the X-Men have faced X-tinction, and it certainly won't be the last.)

This Has Started a Mutant/Inhuman War 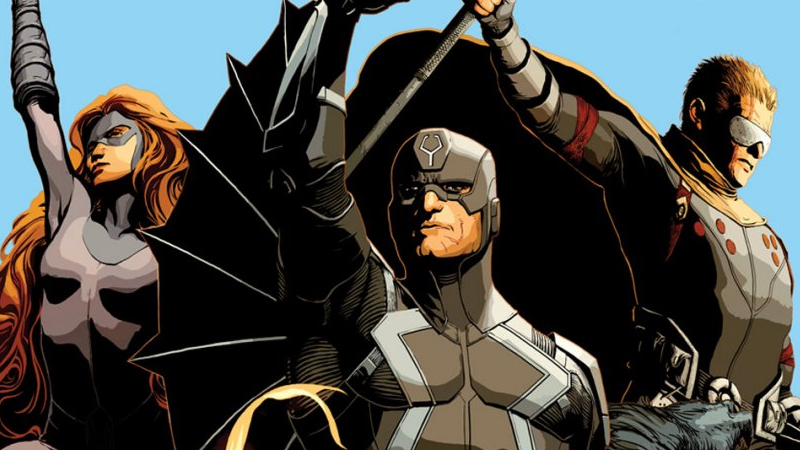 Scott saw this as an act of war from the Inhumans — who of course benefit from the Mists thanks to the fact it bolsters the population of Inhumans around the world. Scott attacked the Inhumans and died, although we don't know how or why; the Marvel comics flash-forwarded past the event, but it's the subject of the currently ongoing miniseries Death of X. The Inhumans, however, are just as in the dark about why the Mists suddenly started poisoning mutants too, and are currently working with the older Hank McCoy in an attempt to find a cure for what has become known to the world as "M-Pox".

This isn't just happening in the Marvel comics universe, by the way. It's accompanied (or maybe even inspired by) the diminished presence of Mutants across Marvel's comics, while an increasingly large spotlight is shined on the Inhumans. As many have noted, the X-Men movie rights are owned by Fox, while Marvel holds the movie rights to the Inhumans themselves, which might have played a factor in the ongoing story line.

We don't know how all this plays out just yet, but we do know that soon enough tensions that have roiled between the X-Men and Inhumans over the last year or so are about to simmer over. A new event series called Inhumans vs X-Men is on the way this month, described by Marvel as a do-or-die last stand by the X-Men to stop the Mists from wiping out their species once and for all.

Rather, I should say Logan is currently dead, the Wolverine that has been one of Marvel's biggest stars, and certainly the most popular member of the X-Men. He died in 2014 after contracting a virus that eliminated his healing factor and inadvertently getting coated in adamantium while fighting the person who started the Weapon X program in his lab.

However, his legacy does live on. After Secret Wars mushed Marvel's multiverse together, the Logan of Old Man Logan found himself part of regular X-continuity. More importantly, Laura Kinney, best known as Logan's cloned daughter and fellow Weapon-X experiment X-23, has taken the name and outfit of Wolverine. 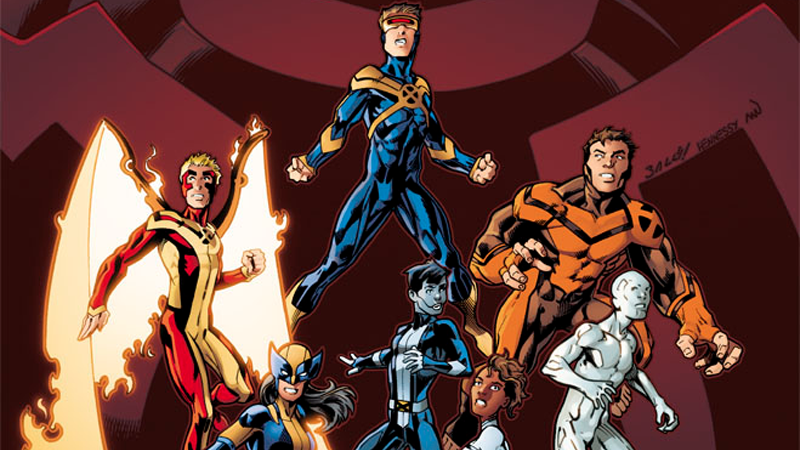 Back in 2012, after the death of Professor X, Hank McCoy went back in time, as you do, to recruit the original X-Men team — the younger, less jaded versions of Angel, Iceman, Jean Grey, Cyclops and Beast himself — and brought them to the present in an attempt to convince the future X-Men, and Scott Summers in particular, to avoid potential civil war between mutant-kind.

It wasn't Hank's brightest idea, but eventually the original, time-displaced X-Men decide to stay in the present to help their older selves not tear themselves apart. However, they eventually split off on paths of their own choosing after the older Scott Summers died.

Here Are All the Current X-Teams 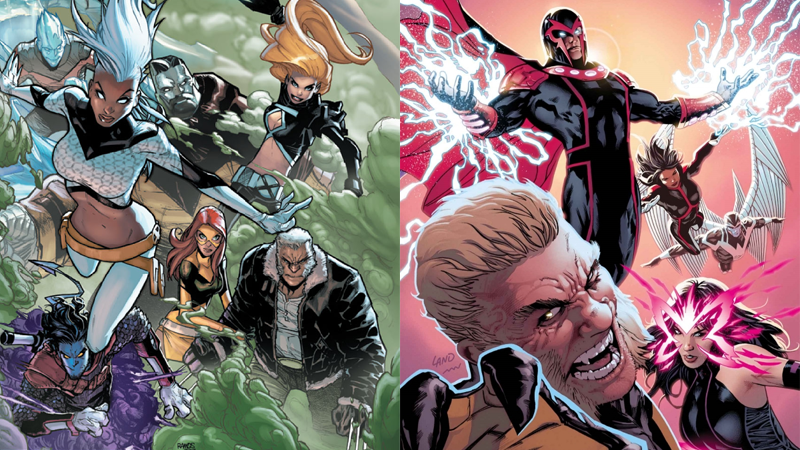 Just because mutant-kind has diminished doesn't mean the X-Teams have.

There's the Extraordinary X-Men — the main team, lead by Storm, in the wake of Scott Summers' death. Storm is joined by the older Iceman, the young Jean Grey, Magik, Colossus, Nightcrawler and the aforementioned Old Man Logan. They of course want to protect all mutants, but they also want to show humanity they're still willing to defend them and fight by their side when needed.

Then there's Uncanny X-Men, lead by Magneto, a darker, more X-Force-esque team of X-Men that aim to carry on Scott's mission to preserve mutant-kind any way possible, and if humanity gets in the way, too bad for them. This team features Psylocke, Sabretooth, Archangel and former Generation X member Monet St. Croix, better known as simply M.

To a lesser extent, you also have the Uncanny Avengers, also known as the "Unity Squad", a team featuring superhumans, Mutants and Inhumans in an attempt to show the world that these different factions can get along. In terms of the team's mutant population, it currently features Cable, Rogue and Deadpool. (Yes, Deadpool is currently an Avenger.)

The All-New X-Men are the younger, time-displaced versions of Beast, Iceman and Cyclops, who are joined by Kid Apocalypse and Oya (also known as Idie Okonkwo). This team is only sort of a team, choosing to take a break and go road-tripping around in a TARDIS-style VW Van that operates as their home base, fighting supervillain crime as they see fit while going on a journey to find themselves.

Then you've got solo mutant heroes like Deadpool and Wolverine, that is, Laura Kinney, also operating within the X-verse... although Laura is also regularly joined by the younger version of Angel, too. 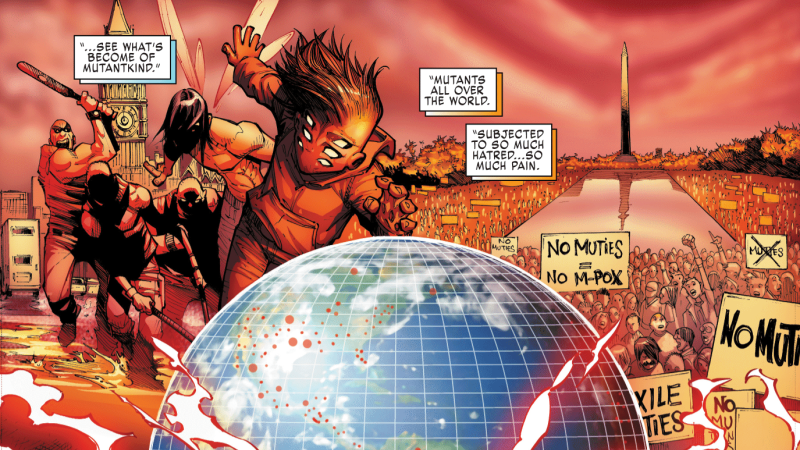 Between whatever Scott Summers did and the M-Pox virus — which even though it doesn't affect humans, scares the crap out of everybody — Mutantkind is back to being feared and hated by humanity at large. While that's nothing new for the X-Men, it's given many of them a more devil-may-care attitude to superheroics recently. They don't really care what people think of them, because they're much more concerned trying to save themselves from being wiped out. 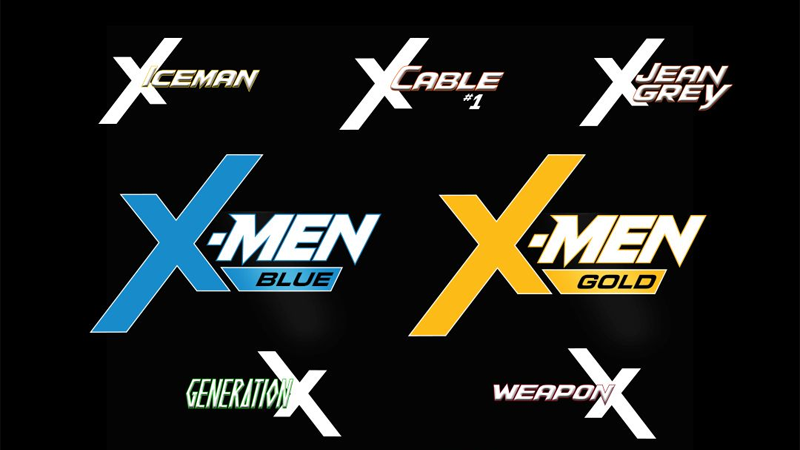 All of this is changing next autumn. In he wake of Inhumans vs X-Men, there's going to be a new line of X-Men books, being released under the banner of the awful, awful name "Ressurxion". We don't know much about the line yet (not even creative teams have been revealed) but we do know the names of each book beginning early next year:

The indication, clearly, is that the X-Men will emerge from Inhumans vs X-Men with a new lease on life, a more hopeful era than the past year of almost-extinction. Hopefully it kickstarts a new era of X-books that aren't quite as messy to understand as this batch has been.