Once You Can Afford It, GTA Online’s Newest Expansion Is Terrific 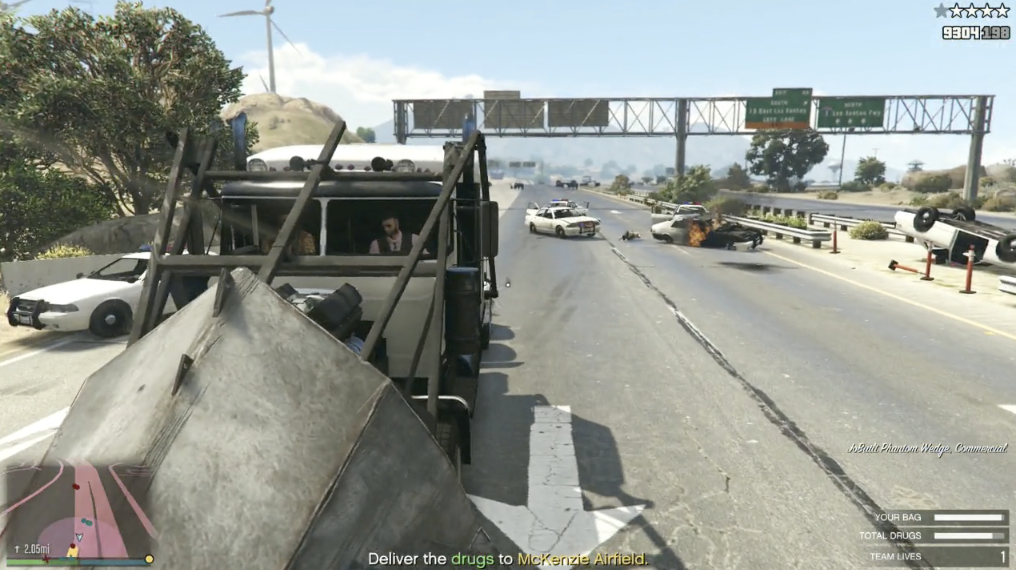 Before Christmas I started sizing up the new GTA Online update, Import/Export. It added a ton of new missions and wacky cars. But a lot of this content was inaccessible if you didn’t have a lot of in-game money. You’d have to be rich (virtually, at least) to play it. So I spent the last week getting money and have been playing a lot more.

It helped that Kotaku let me expense some Shark Cards, which is how you can get in-game money fast. Time is money, and while you can achieve everything in the new expansion for free just by playing a lot, I was in a rush to get to those new missions and wacky cars.

Last week, I’d emptied my wallet becoming an in-game CEO last week, so I didn’t have the $US1.5 ($2) million to get the garage I needed to start this stuff. I spent $US50 ($70) on Shark Card that got me 3.5 million in-game dollars. Once I had that, I was set. I’ve now been playing them for hours and I have to say that Import/Export is one of the best updates to GTA Online this year.

One of the big new features Import/Export adds is the the ability to steal and sell expensive cars to make money. To start, I bought a car storage warehouse and began stealing cars and stockpiling them. I had more fun stealing cars than I expected. You can’t just steal any car. Instead you use your computer at your CEO office and “source” a car. The car you get and its value are random. Once a car is sourced, you are given a mission marker and drive out to that location.

Stealing cars involves playing missions. Thankfully, there is a decent variety. Some missions are basic: steal a car from a home or grab a parked car surrounded by a group of gang members. Other ones are more complex. In one steal mission I had to drop a hook from a large helicopter to pick up an expensive sports car and fly away with it.

What makes these missions more intense is that any damage your stolen car takes comes out of your pocket when you drop it off at the warehouse. Your mechanic doesn’t work for free, you know. Making this tension worse is the fact that the amount of money it’s going to cost you to repair your mistakes appears on the screen at all times during these car theft missions. Watching that number go up as the car takes damage is enough to make even the most brave players slow down a bit.

Once you have a stolen car in your garage you can then activate a sell mission. You can sell cars stock with no improvements and make some cash. You make more money if you spend some to improve and change the car for wealthy customers. As you do this, you can create some super ugly cars. The rich buyers don’t specify what they want. So I would always create gross, bright green monsters and giggle about how much they were paying for them.

If you sell one low cost vehicle fully upgraded you can make around a $US30k profit. Higher-end, fully-upgraded cars pay $US50k to $US80k in profit. For a more detailed breakdown of payouts and costs check out this spreadsheet that GTAForums user Nefarious put together.

This is, of course, assuming you don’t take any damage during the sell mission, which is easier said than done. Whenever you are selling or stealing cars any other player in the session can interfere and stop you, destroy the car or even steal the car from you and sell it themselves later. Because of this I would sometimes wait for the relative safety of a near-empty session before doing my missions.

Stealing and selling cars is a fun way to make money in GTA Online, but it becomes even more enjoyable if you bring a few friends with you. Having a group of friends drive around in high-end cars, avoiding cops and rivals feels like a scene from The Fast and The Furious franchise. But it might be tricky convincing friends to actually help, because the people assisting you get paid far less than you, around $US5k or so. At one point during a sell mission my two friends and I sold three vehicles and I walked away with about $US200k. They each pocketed about $US5k.

After spending a few days with the car importing and exporting missions I get the sense that it is possible to make a decent amount of cash with these missions. I

t will take some time, and after a few hours you might start running into the same missions and cars. Thankfully the missions don’t take too long and you can easily do them without other players if you don’t have anyone else to explore Los Santos with.

Completing enough of the sale missions unlocks a series of new special vehicle missions and these missions are some of the most fun I’ve had in GTA Online since the game launched back in 2013.

I haven’t unlocked all of them yet, but the first one that players can access involves specially made vehicles that go really fast while flipping cars sky high and out of the way. Basically Rockstar has added this crazy car from Fast and Furious 6 into GTA Online.

The results are awesome.

Driving into traffic at high speeds and flipping cars high above you is just the best, especially if you’ve been playing GTA Online since launch. This game has never added a car this wacky before and being able to just drive straight through oncoming traffic feels incredible. As you can see below, the cars are a bit wonky and the hitboxes on them seem a bit too big, but these flip-cars are a blast to drive.

I also unlocked the special mission involving the quadski, a four-wheeler that can also be used as a jetski. These vehicles aren’t as exciting or loud as the flip-car, but they ended up being the one that I wanted to own the most. There is just something really cool about being able to travel over both land and sea. Oh and they also are equipped with powerful machine guns, because of course they are. This is GTA Online after all.

The latest mission I unlocked might be my favourite. In this special vehicle mission my friends and I were tasked with grabbing drugs from different police busts around Los Santos. To aid us, we were provided a large semi truck outfitted with a giant triangular wedge on the front. Rockstar has taken this incredible vehicle from the Mythbusters finale and brought into the game.

One person drives while the others sit on the back and shoot police. At each drug bust the driver uses the large truck as a battering ram, destroying anything in their path. Once in, players have to grab the drugs and fill up their bags. The whole thing reminded me of a mini-heist, but with less planning and more action.

The biggest bummer about these special missions is how most players won’t get to actually play them. To play them you need to be a CEO, own a vehicle warehouse and have completed at least a few steal missions. None of this is cheap either. Becoming a CEO will cost you at least a million dollars and the cheapest warehouse costs $US1.5 ($2) million.

So unless you have a friend who already meets these requirements, you will have to grind for some time to earn enough money to see these awesome missions. But once you do unlock them they are some of the most fun you can have in GTA Online. I hope Rockstar adds more missions like these in the future — maybe make them easier to access too. At least some of them.

I also spent a lot of time with the new adversary mode that was added last week. This new vehicle-based game mode is called Turf Wars and is all about spreading more of your colour across a series of floating arenas as you drive through them.

Turf Wars has quickly become one of my favourite things to do in GTA Online. What at first might look like chaos is actually more tactical. Playing with friends, you can plan out who will drive where. For example, on one map there are two rings of track. I took the outside track while my friend took the inside. We were able to win rounds more often using these types of strategies.

You also have to think about who is winning at the moment. At one point we were down in the score and we saw that the red team was in the lead and getting close to winning. To help keep the match going we drove over red spaces and avoided other colours as best we could. Doing that enabled another colour to score and buy us more time to win.

Thanks to an ongoing double XP and money event, Turf Wars is also a fantastic way to make some GTA dollars. Depending on what place you end up at when a match finishes and how many rounds the match went, you could walk away with well over $US50k.

At one point I won a particularly long match and received nearly $US75k. If you are looking for a great way to get back into GTA Online while making some cash and having a ton of fun, I highly recommend playing Turf Wars.

There is a lot to do with this latest update. After spending a week playing GTA Online for hours and hours I still have more missions to unlock and honestly, I want to play more Turf Wars.

As with all GTA Online updates I recommend inviting some friends with you. But even alone Import/Export is a fun way to make some extra cash and adds a lot of new missions to GTA Online. These include some, like the flip-car mission, that rival anything in the game in terms of fun and excitement. 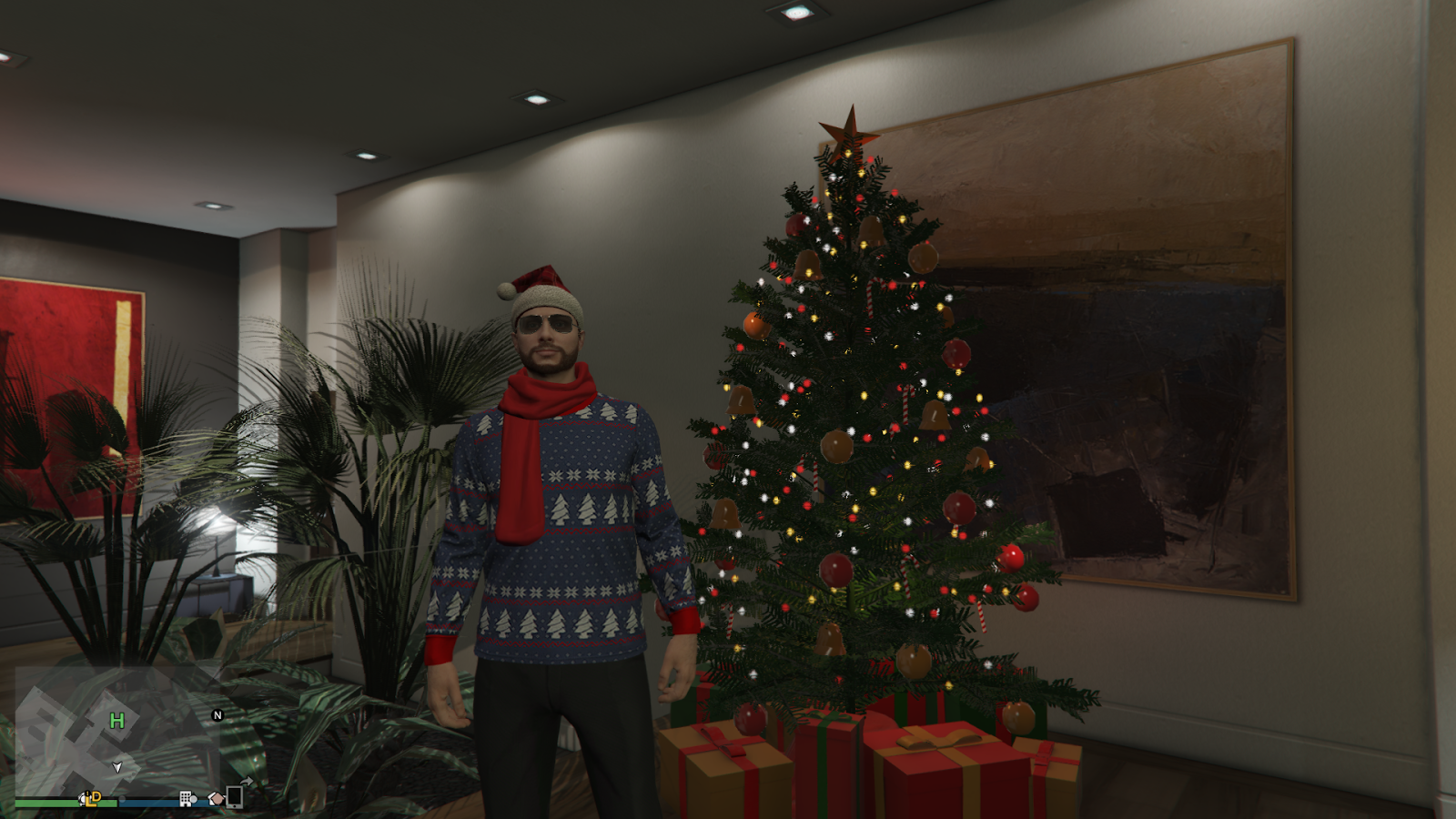 On top of all the new Import/Export goodies Grand Theft Auto Online also received its festive update this week bringing back a bunch of Christmas related clothing and items for free. Anyone who logs into GTA Online can grab all of the holiday related goodies for the fantastic price of $US0 ($0)!

And while you deck yourself out in some holiday apparel, enjoy the Christmas trees now found in everyone’s apartment and office. As of today, the temporary holiday snowfall is blanketing the game, too.

Most of the festive clothing is old, but some new pieces of clothing include glowing hats. With the last few updates Rockstar has added a bunch of outfits and clothing options that glow. I guess the old consoles just couldn’t handle the amazing glow of hates like this one: 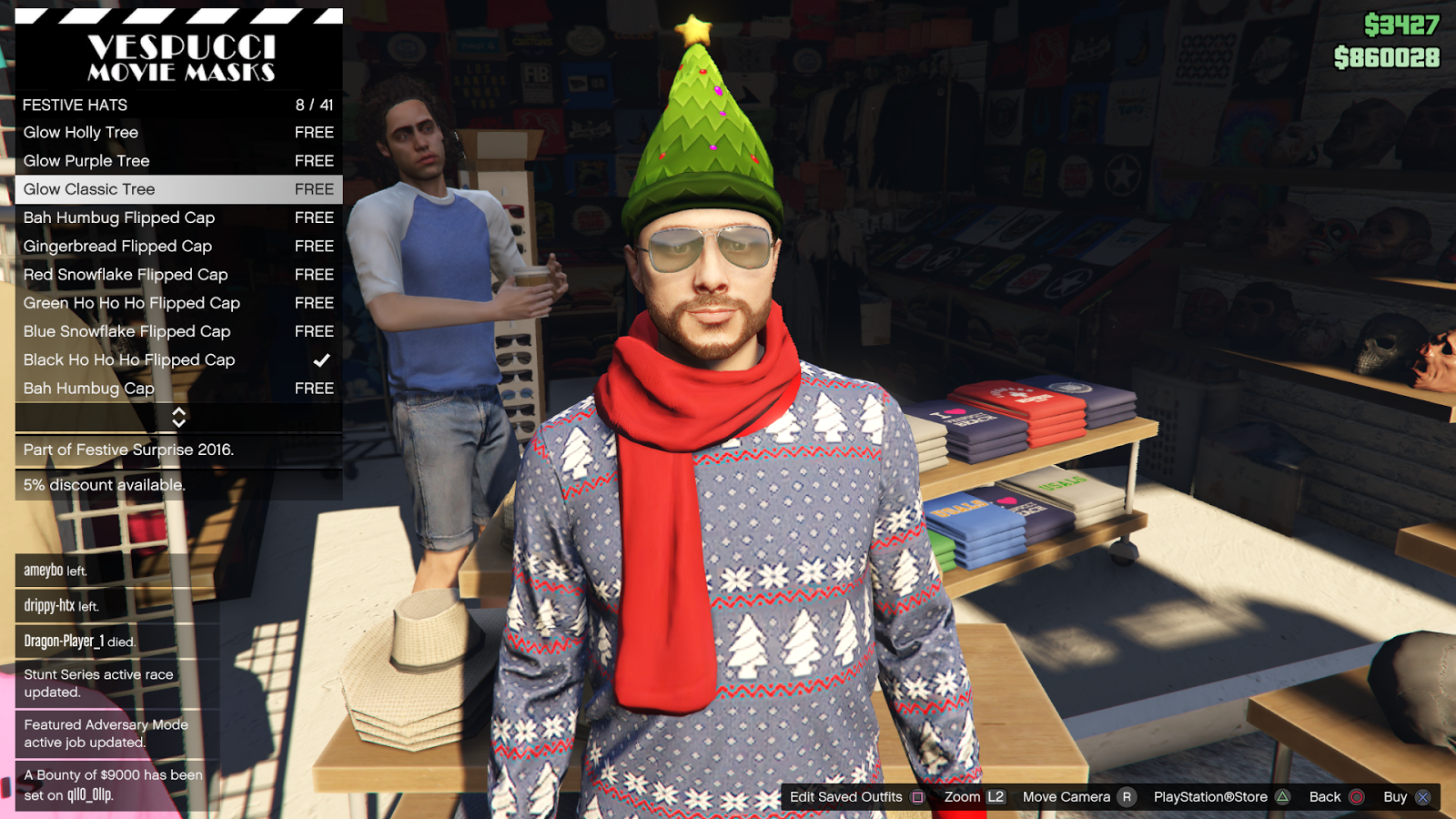 If you’ve been thinking about jumping back into GTA Online, now’s a great time! You can even get some free festive clothing and celebrate the holidays with expensive cars, massive gun fights and ever growing criminal empires.