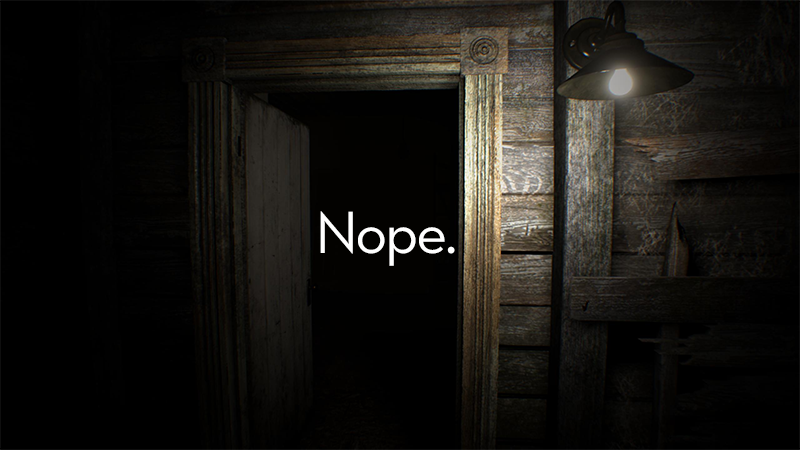 So you've been hearing good things about Resident Evil 7, and you want to play it. There's only one problem: You're a huge coward. Don't worry! I've got you covered.

It may seem counter-intuitive that easily frightened people would want to play a scary new game, but I actually think there are a fair number of people out there who fit that description. That's partly because Resident Evil 7 isn't just good because it's scary — it's good because it's a tense, well-written and well-designed game, with an engrossing sense of mystery and some great dark humour. It gives you a fascinating, creepy house to explore and all manner of hidden secrets to discover. It's just that it can also be really scary.

If you want to play the game but are worried you'll get too freaked out, here are some things to try.

Get through the first hour.

For starters, go in knowing that Resident Evil 7 is a very different, much scarier game during its first hour. For that opening act, your character is just... well, just completely fucked. He's in over his head with no weapons, stumbling into an escalating series of horror shows. It isn't until after the garage boss fight that it starts to feel like a Resident Evil game. Things take on a more manageable rhythm, and you start to feel more in control. You'll begin stockpiling ammo, unlocking upgrades, expanding your arsenal, crafting items and so on. The game becomes fun and satisfying, rather than purely tense and terrifying.

Play during the day.

This is an easy tip, and one that I fully endorse. Everything seems less scary during the day. Our own Luke Plunkett employed this method:

how i, a coward, plays resident evil 7 pic.twitter.com/PuxEPR17hn

See? It worked perfectly for him. No problem at all.

Hmm. OK, actually, playing during the day is a good start, but there are a few other things you can try, too.

Play with a friend (or friends).

Horror is completely different with a group of people. Have a drink or two and delight in the grisly awfulness you're seeing on screen. Pass the controller back and forth. What once seemed insurmountably terrifying will quickly become funny and entertaining.

Turn up the brightness.

The initial brightness adjustment screen in Resident Evil 7 tells you to set it so that the object on the left is completely invisible. That had me turning the brightness down to like, two, which made the game so dark that I could barely see what was in front of my face. It was playable and it certainly enhanced the creepy atmosphere, but it could be a lot to deal with.

Turning up the brightness to three or four made a pretty big difference, however. When I watch someone playing the game on YouTube, they often seem to have the brightness up even higher, and some folks look like they have it maxed out. At higher brightness settings, you can see pretty much everything around you, and the game is way less scary.

Here it is with the brightness at three, which is around what the game suggests: 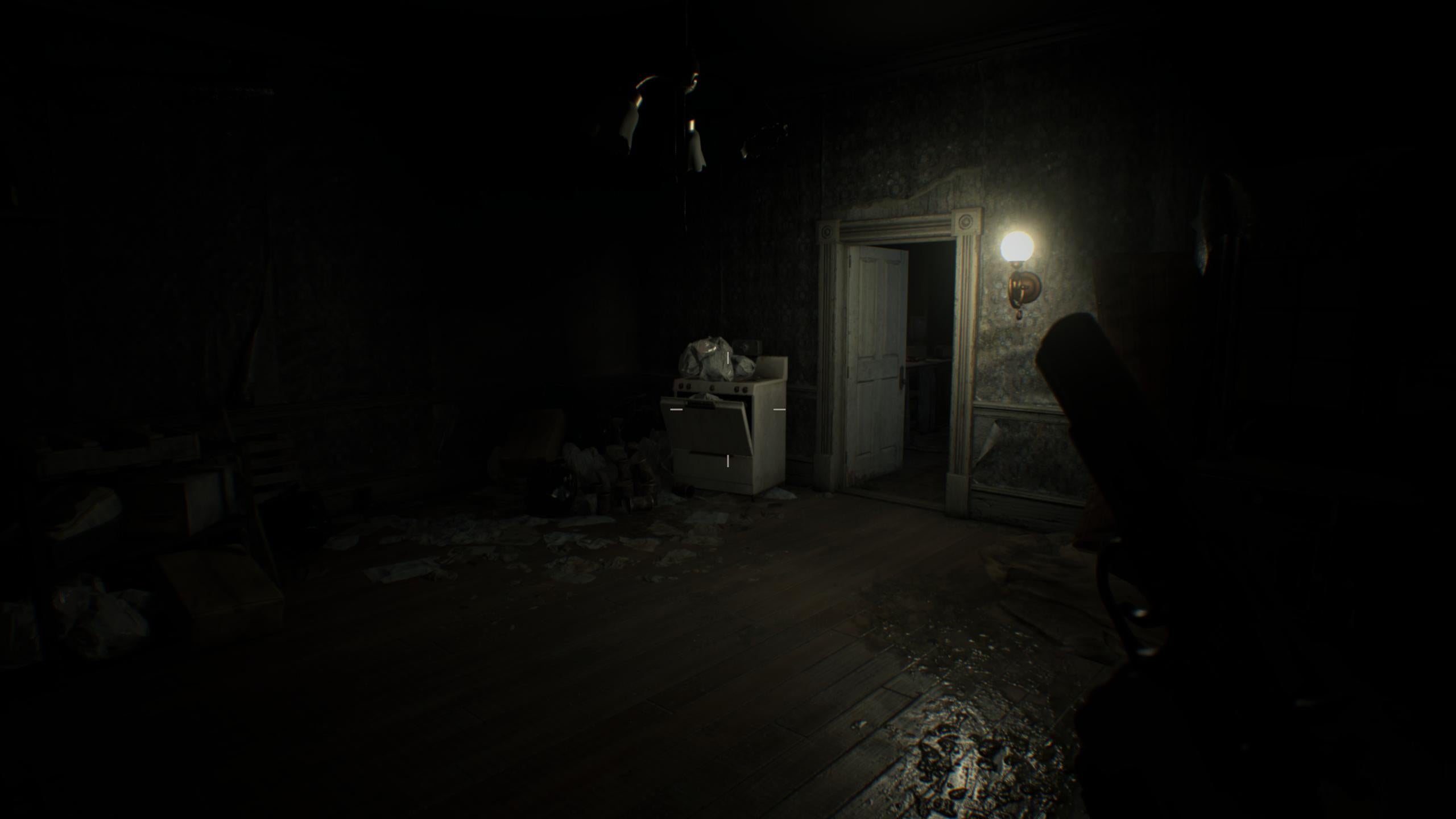 Here's the same scene with the brightness at nine: 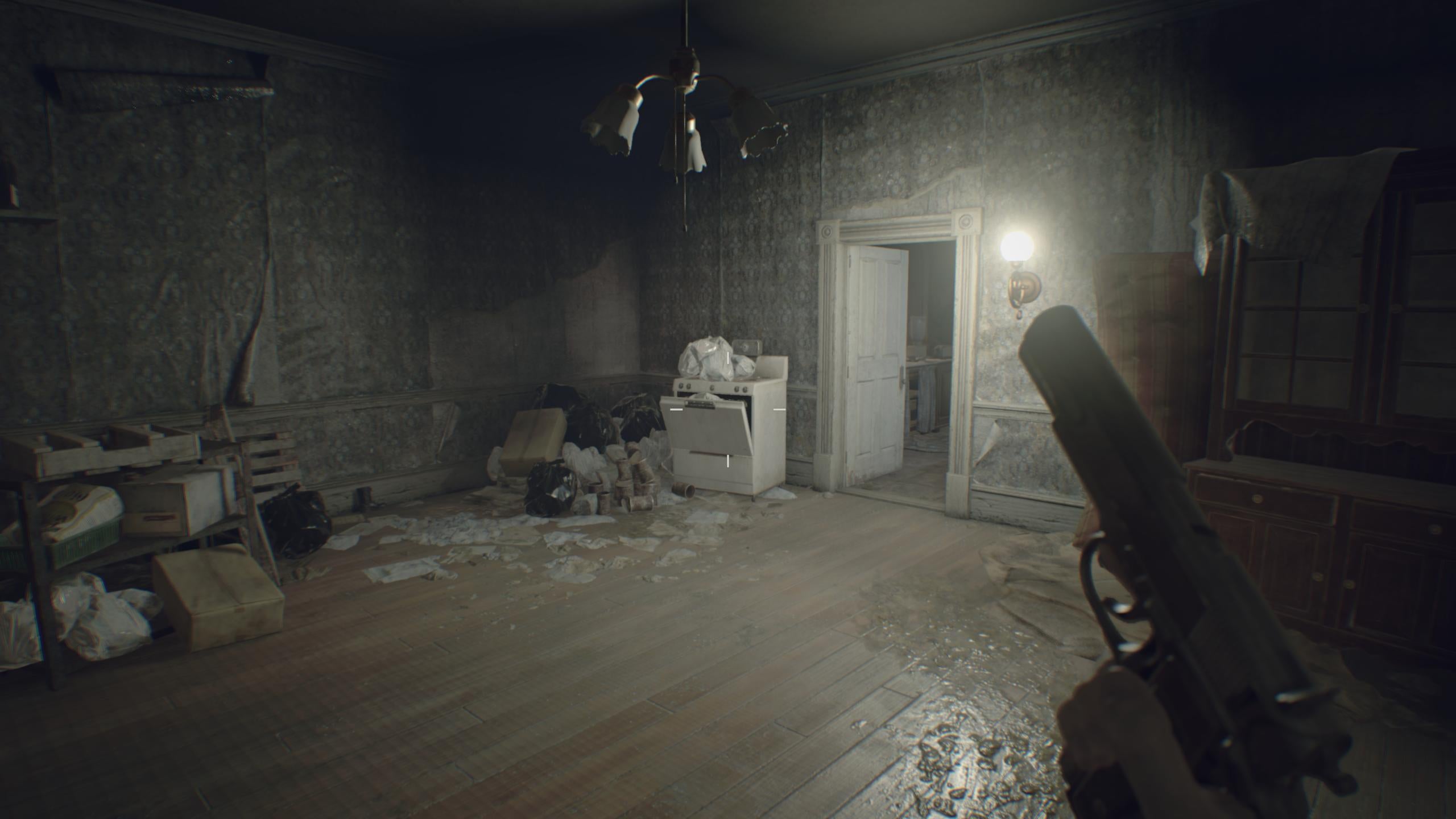 It's a huge difference, and it could go one brighter.

Turn down the volume.

Take off your headphones and turn your external speakers down. Not off, just down. Turn on subtitles so you can tell what everyone is saying. You'll miss out on some of the game's terrific sound design, but given that the sound has been designed to scare your pants off, that's probably fine.

Are you serious? If you're reading this article, you should already know better than to try playing this game in VR. Come on.

If you're on PC, try playing in windowed mode.

This can be helpful if there's a particularly scary bit that you don't want to deal with. Pop the game out to windowed mode and keep playing. It's the visual version of turning down the volume — everything is smaller and way less frightening.

Rush forward and let the monsters kill you.

This is a tried-and-true method I sometimes use to get over my initial fear in horror games. I've written in the past about how horror mostly consists of two feelings: Dread and panic. Dread is when you're not sure what's around the next corner. It's when the game is fucking with you, letting your fear of the unknown drive you up the wall. Panic, meanwhile, is when the monster finally breaks from the shadows and you have to deal with it. It's coming for you, and you don't know what to do.

I have a feeling that dread, more than panic, is what pushes people away from games like this one. The fear of the unknown is almost always worse than whatever monster is actually lurking in the next room. My advice for dealing with video game dread is to simply barrel forward into whatever it is that's waiting for you and let it pop out and kill you. 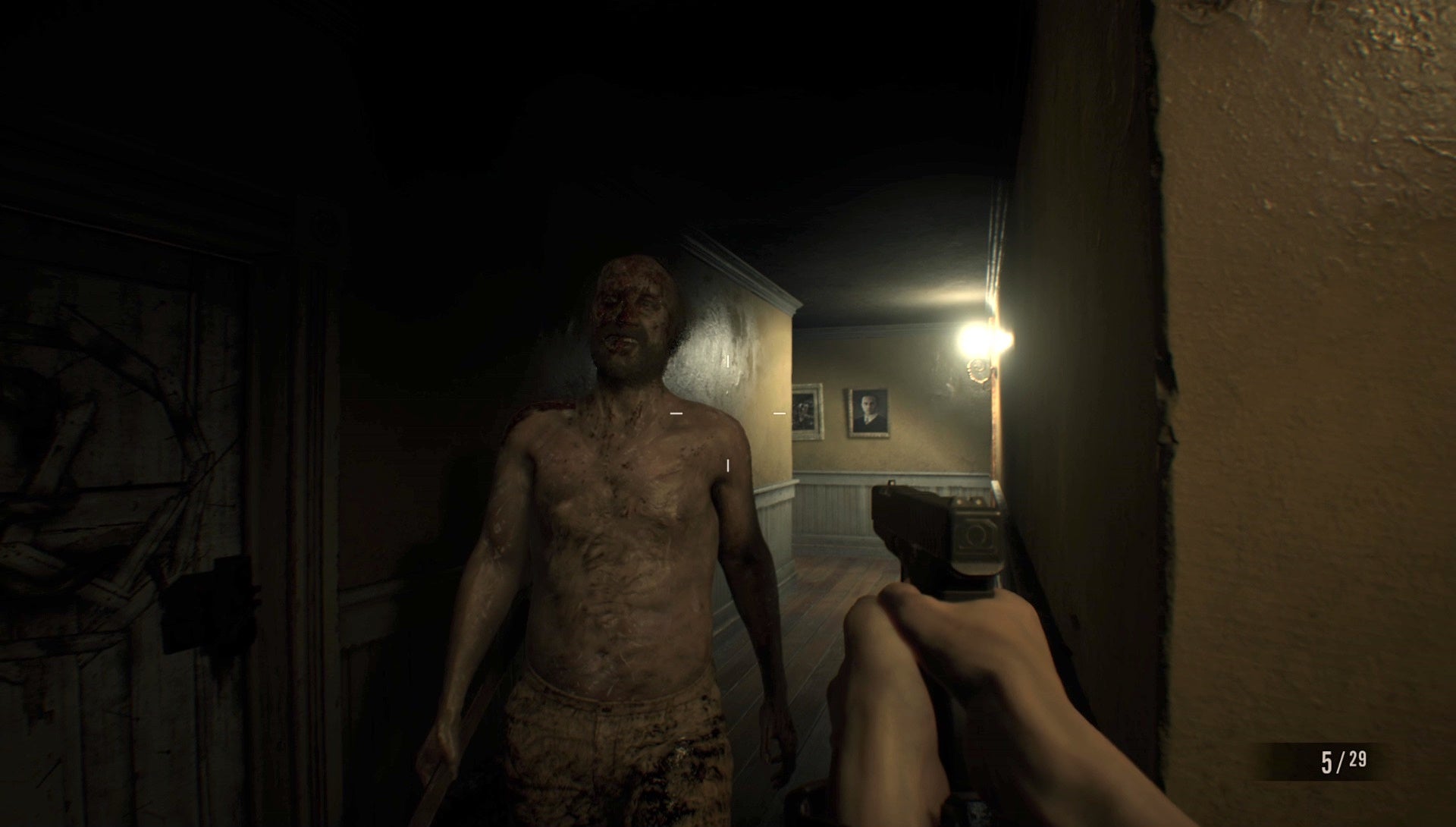 Whatever dude, you're mostly just annoying.

Refuse to play the part of the hesitant, terrified horror movie protagonist. You're a video game character; you have infinite lives! Stroll through the level and find all the puzzle solutions, heedless of the boss that keeps hitting you when you jog past him. Realise that you can take a good dozen hits before you die. Inure yourself to the grisly death animation you'll have to watch if you run out of health.

Put on the Zootopia soundtrack.

You know what's not very scary? Disney's hit 2016 animated film Zootopia. Put the soundtrack on in the background while you play. Even the most horrific monster won't seem all that scary with Gazelle yodelling over it.

Allow for the possibility that this just isn't your game.

If none of those tips help, I feel I should at least float the possibility that Resident Evil 7 just isn't your kind of game. Do you like horror games at all? Do blood and guts make you cover your eyes but also frantically giggle? Do you get some pleasure out of being freaked out, then mastering your fear and fighting back against the thing that was chasing you?

If not, that's OK. There are so many video games you could play, and Resident Evil 7 is just one of them. Go play something else. It's fine.