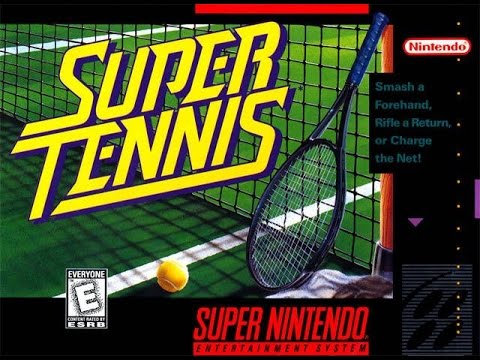 As sports fans will be well aware, the Australian Open tennis grand slam is currently playing host to a lot of athletes busy either underperforming, not giving a shit or confounding expectations entirely.

So what does a fan do when things aren’t going to plan on the court? You make your own virtual player and beat the snot out of everyone. And to help you rectify the errors and on-court apathy, here’s the best virtual recreations of tennis in video games.

Before the days of Virtua Tennis, Top Spin or even smaller indie productions, there was 4D Sports Tennis. And for a long time, it was one of the most challenging games of tennis around. With a first-person perspective, a mouse-based control scheme and about as real a physics engine as you could cram into computers with the clock speed of a potato and bugger all RAM.

There was a third-person view if the difficulty was too high, and the game offered multiple replay angles, stamina tracking and a full suite of statistics. There was a full career mode as well, which was noticeably improved in the sequel (World Tour Tennis, 1993). The latter also had better graphics, but 4D laid the foundations.

It might not have detailed RPG elements, but if you were looking for a tennis game on the SNES Super Tennis was the game to play. It’s still the game to play, actually, and it holds up reasonably well on an emulator thanks to the variety of courts, opponents and gameplay styles.

One of the main things that holds Super Tennis together, even today, is the consistency. Tennis games in the 1990’s, no matter the platform, either had garbage controls, appalling camera angles or inconsistent physics system. Super Tennis suffered none of that nonsense, and it’s still great to play today if you want an oldschool racket bash.

Called Power Smash in Japan, the Virtua Tennis series started life in the arcades before making its way to the Dreamcast and other platforms. Based around real players with very distinct playstyles – Philippoussis has a big serve, while Tommy Hass has a cracker of a forehand. It means you don’t truly get to craft your player, although that would change with future iterations of the franchise.

Virtua Tennis always suffered from players being able to magically dive for Every. Single. Ball. But it was a visual treat for the era, was a fantastic game to play at the arcades and was one of the many, many gifts that eventually found its way to other platforms from the Dreamcast. It was unabasahedly an arcade game but it didn’t take itself too seriously, and that’s one of the reasons why the original holds up better today than the most recent titles. (If you want a much deeper career mode, however, Virtua Tennis 3 isn’t too bad.)

For a game made in the last few years, Tennis Elbow looks a bit garbage. But if you’re after the most exhaustive career mode for a budding virtual tennis professional, complete with challenger tournaments, doubles, the Davis Cup, nine separate court surfaces, split screen or local co-op, LAN and online play, a full ranking system, mod support and a game that runs on a potato, Tennis Elbow is genuinely brilliant.

First released in 1999, French developers Mana Games have continued iterating and working on the game ever since. There’s a Mac version as well for Macbook users who need something quick to play on the go, and the creators are still updating the game: the latest patch came out just a few days ago.

But what if you want more of a Prince of Tennis-style experience, a story about a boy or girl wonder who rises up from nothing? Mario Tennis first launched on the N64, later coming to the Game Boy Color before launching on Virtual Console a decade later.

Apart from having RPG-style mechanics and a story almost befitting of its own anime, it was also one of the few tennis titles available for the Game Boy Color. The shot to shot action was a little slow, but the controls were solid with almost a combo-like mechanic for making shots. Around 7 shot types were possible, which wasn’t bad given that you only had the A and B buttons to work with.

There was also a cool mechanic where you could unlock more tennis courts by linking the N64 and Game Boy Color versions together, and the N64 Transfer Pak could be used to send characters between the two versions. Also: the music was great.

Any game where this can happen is automatically GOAT.

Tennis games don’t have to be serious affairs though – they can just be a mechanism for a silly, power-up style arcade games. That’s what Tennis Antics, a freeware game released in 2000. The actual game is really just a series of boss battles where you aim to deplete your opponent’s HP by making sure the ball bounces more than once on their side of the court.

The above is the only video I could find that didn’t have some awful soundtrack from a dank club, but performance wise it runs just fine. I haven’t played it in at least a decade, mind you, but it’s free and a good example of how a tennis game doesn’t actually have to be about tennis at all.

I never liked the way the ball tended to float in the Top Spin games, but the presentation is about as good as you’re going to get today unless a publisher shows an interest in making tennis games again.

Like their NBA series, 2K’s attempts at tennis were pretty respectable. It’s got a deep career mode with plenty of recognisable names, although not quite as deep as Tennis Elbow. That said, it’s a much better looking and sounding game. 2K also had the decency of shipping a sports game without commentary, which was a delight back in the day as sports commentary was awful back then and something most players turned down, or off, pretty quickly. It’s not called tennis, but that’s exactly what Pong is.

That’s our list of the best tennis games. Any favourites of yours we left off? Tell us in the comments!