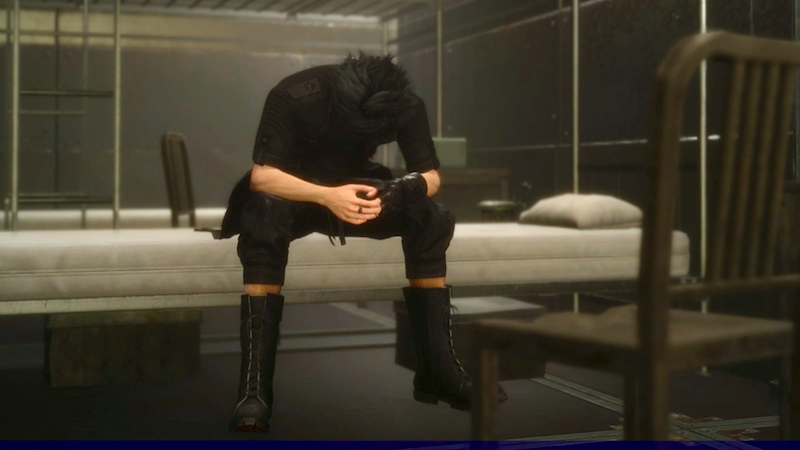 So you just started playing chapter 13 of Final Fantasy XV. It sucks. You feel trapped in a nightmare that will never end. Take some small comfort in knowing that you are not the only one to suffer through it.

By working through these ten stages, you will eventually come to terms with this very long, very bad video game level. Spoilers.

This can’t be happening. Did the game really just take away all my party members and weapons? I put up with all that nonsense on the train thinking that we’d arrive in Niflheim, find Prompto, and get to drive around in a new area. Instead, we unceremoniously crashed the car and now I’m apparently going to have to go through this dark-arse factory alone, with no weapons other than this ring.

Nah, I doubt this is really what the game wants me to do. I’m sure I’ll find my party members and get my weapons back soon. No way the entire chapter will be like this. No way.

OK, wow. Fuck. It’s been almost an hour and Noctis is still alone and still doesn’t have any weapons. This magic ring is trash. Oh, sure, the Death spell can “kill anything.” They don’t tell you that it takes a hundred years to charge up and that enemies can easily stagger you and interrupt the process. And these stealth sections! There’s no way to tell if the soldiers can see me until they have already spotted me, and then they just chase me around until I finally get to a hiding place. And hiding spots aren’t clearly marked, and just like in the rest of the game, the “hide” button is the same as the jump button, and 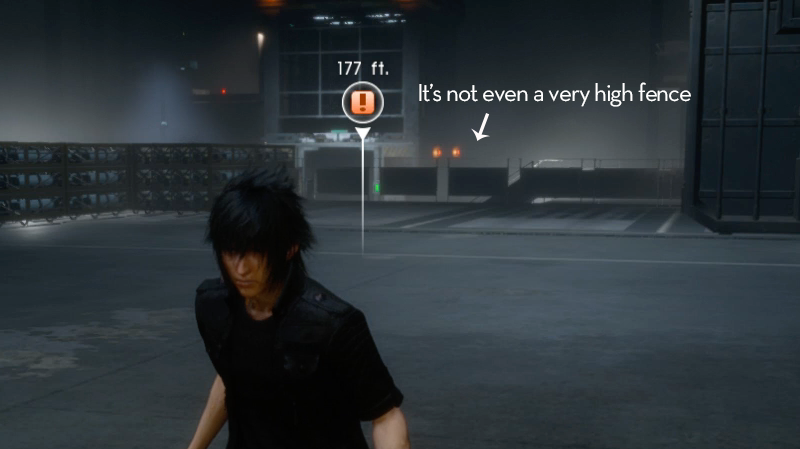 oh my god WHY CAN’T HE JUMP OVER THIS FENCE, I NEED TO GET TO THE OTHER SIDE, ARE YOU SERIOUSLY TELLING ME I NEED TO GO ALL THE WAY AROUND

Maybe I don’t have to do this? Maybe there’s some sort of shortcut. I’m going to go look online and see. Or maybe I’m missing something about this ring? Maybe there’s a door that, I don’t know, like, if I can enter some sort of password that’s inscribed on the ring, it will let me bypass this part of the chapter and move closer… even just a little bit closer… to the end? If there’s an end.

There’s no end. This is never going to end. I’m going to spend the rest of my life walking up to locked doors and being told that I have to backtrack and get a new keycard. Life in the outside world will carry on without me. My friends will get married, have kids, move away. My parents will grow older, and eventually they will stop calling. I’ll still be here, looking for a level 5 keycard as the world continues its course through the indifferent vacuum of space.

It’s ok. It’s ok that chapter 13 of Final Fantasy XV never ends. I’m fine. I’m even having an ok time. I’ve figured out which enemies I can kill with Alterna, and which I can just dodge a dozen times and eventually kill with Holy. I can survive in this purgatory well enough. It could probably be worse. I shouldn’t complain.

Wow. WOW. So I finally powered up the central elevator and this huge guy appears behind me in a cutscene and KNOCKS ME ALL THE WAY BACK DOWN TO THE BOTTOM? In a CUTSCENE??? 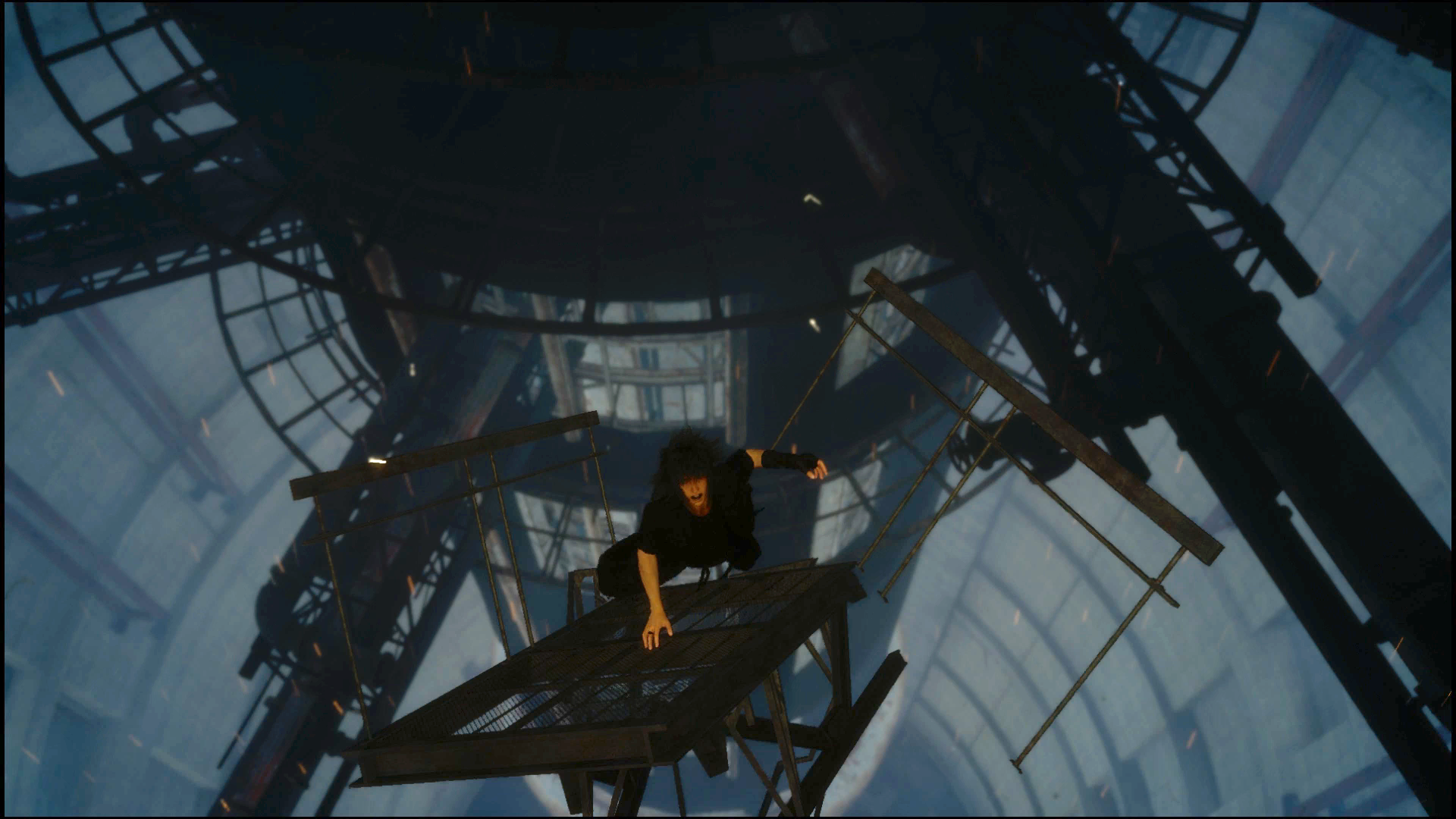 Such cruelty! To give me hope just after I’d made peace with my fate, only to rip it away! I swear to god if that bighair sack of shit Ardyn taunts me one more time I’m going to take the hard drive out of my PS4 and burn it.

Jason told me that this chapter “wasn’t that bad.” I wonder what it feels like to be so completely blinkered and wrong. What time is it on the east coast? 2AM? I’m texting him. Get ready for some texts, motherfucker.

What if I just stopped playing video games altogether? That must be it! This has all been a test to see if I have the willpower to walk away from my controller and never look back. What if I did that?

I can’t stop. I can’t finish, but I can’t stop. Noctis sits in the save dormitory, staring at the floor. I realise that I am Noctis, and he is me. Finally, a game has eliminated the barrier between player and character. I will sit here in the drab grey bunkhouse of my soul, kept company only by the mediocre guitar solo of true loneliness. I will stare at the ground and await the sweet release of death.

Wait, so this nigh-unkillable monster that’s been chasing me is actually the Emperor of Niflheim? Because he was transformed into a demon? What? Somehow this stupid-arse story development manages to add insult to injury. I finally got my party back together and was starting to feel pretty good, and then the game flings this nonsense at me in the middle of a boss fight. 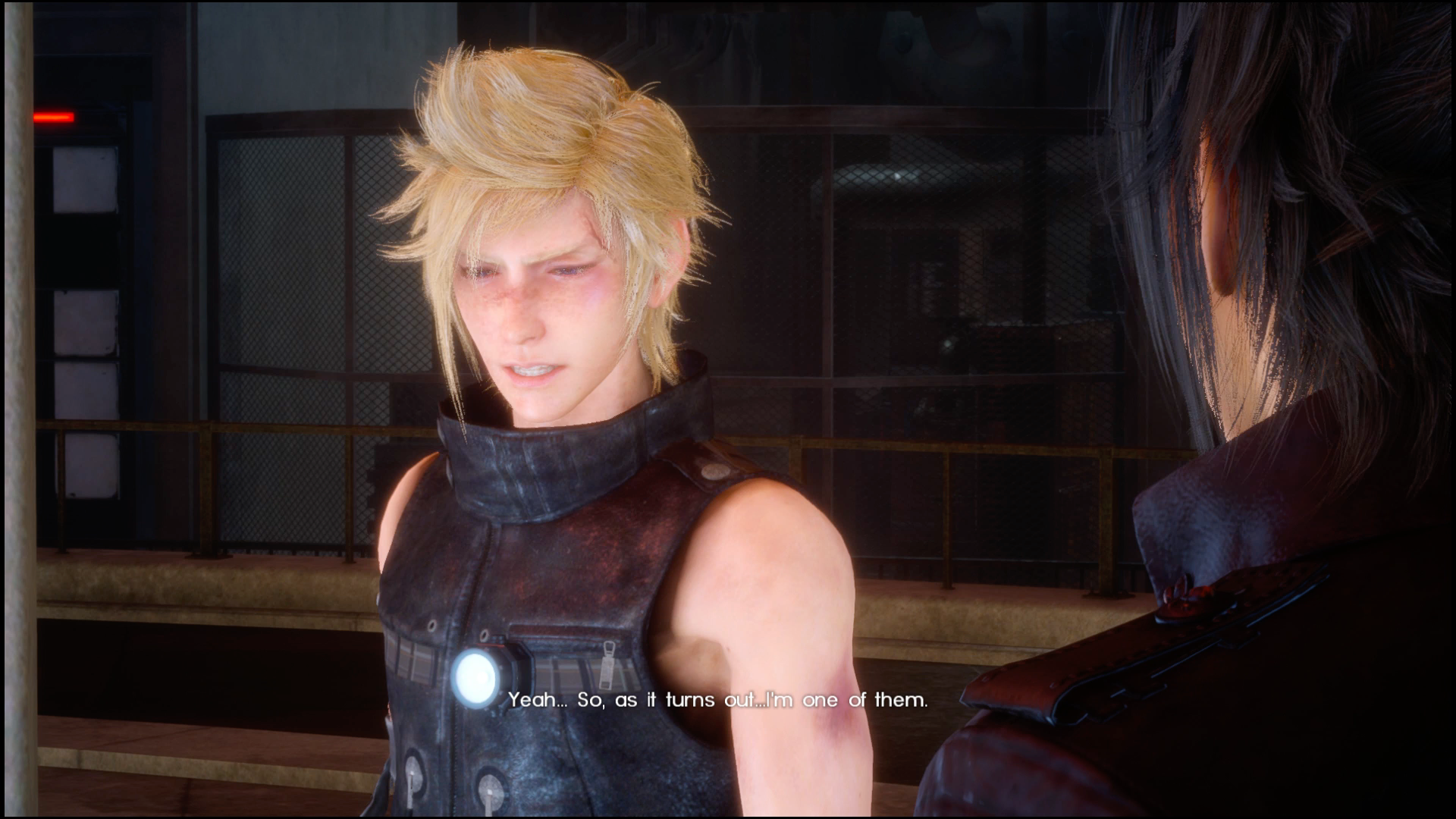 Sweet Jesus, that final boss fight. How much health does a dude need to have? And then they capped it with a can’t-win battle against a bunch of demons and a timed sprint through some closing doors. And what was that closing cutscene? What just happened with the crystal? It ate Noctis?

This game, I swear.