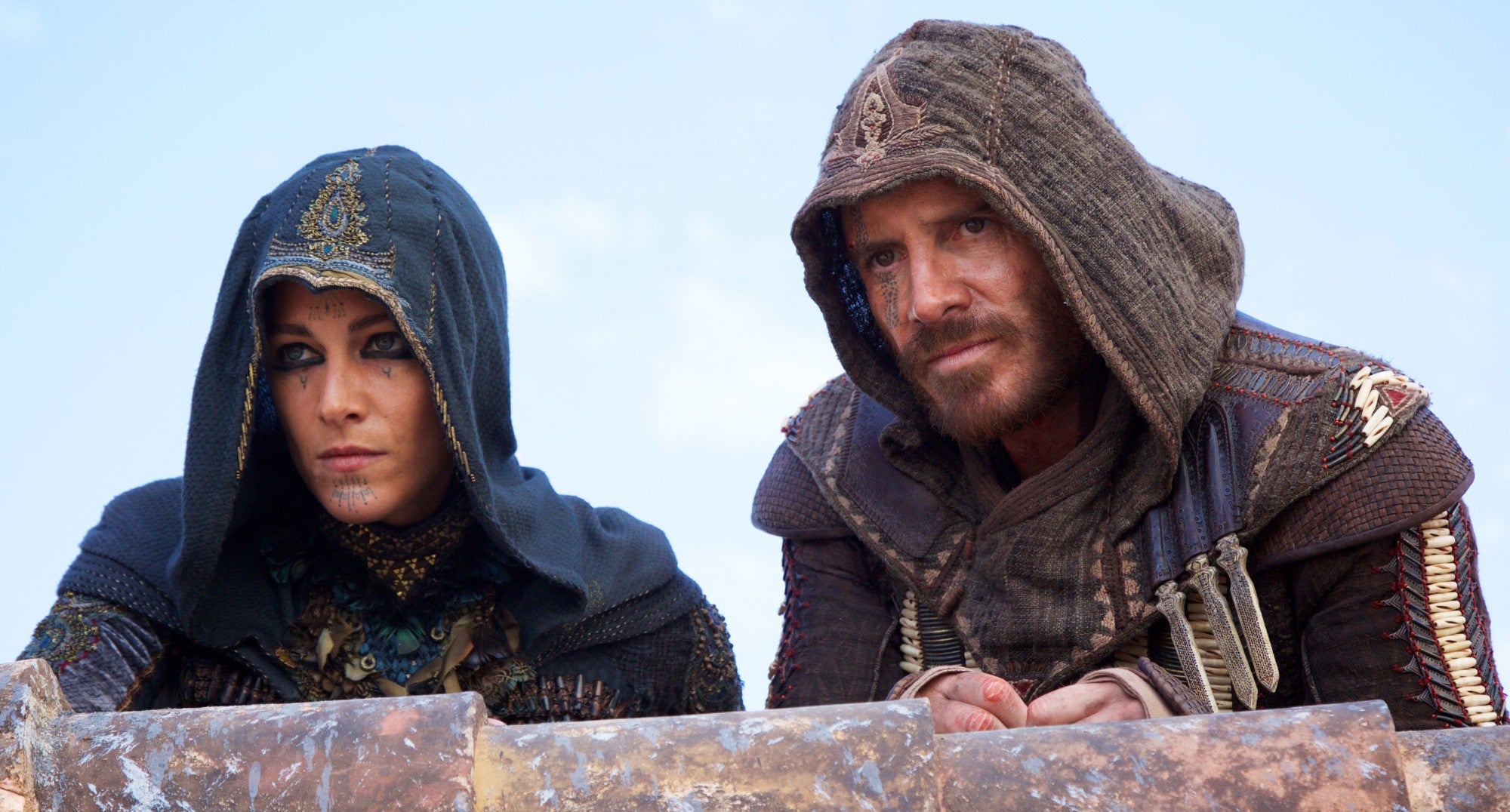 Two of us saw Ubisoft’s attempt at transmedia franchising, and we did not care for it. Not one bit.

Gita Jackson: Here’s a good place to start, I think: was there anything you liked about this movie?

Mike Fahey: I’d heard you were a tough interviewer, but I didn’t think you’d hit me with such a difficult question right out of the gate.

Gita: Let’s be positive! I’m sure there’s at least one thing you liked.

I can think of about…. three things I thought were at least not horrible.

Fahey: I’d say the fight choreography was good. The combat was exciting to watch, even if in the grand scheme of things a lot of it felt pointless.

Gita: I definitely agree. One of the better modern action movies in terms of that, I’d say. I could follow the action scenes really well, which I think is a problem in, say, the Marvel movies. I knew exactly who was getting punched and why (at least in the short term question of “why”).

There were also some moments where the cinematography was nice. While the colour grading was driving me up a wall, there were a couple of scenes where the camera work was really graceful, and the shots were framed in a painterly way I appreciated. I don’t think Justin Kurzel is a bad director by any means. Just, wasted on this project.

Fahey: I will give you the cinematography as well. There were some very lovely shots, even if they were either white and grey or beige, depending on the time period.

Gita: That colour grading. Good god. I have some serious thoughts on that.

Fahey: By all means, I’d love to hear your thoughts. Mine amount to intense stares at the screen, sighs and head shakes.

Gita: This is a little nerdy, so I apologise. A guy I went to college with made this great video about the colour grading in the Marvel movies that pointed out something I never really thought about, but now am definitely noticing more and more. None of those movies have true black values. The blacks in Marvel movies aren’t very dynamic or crunchy, so on the whole they all look a little washed out. This movie had that problem as well, and in spades. The blacks weren’t black so none of the colours popped. Ever. I think the only truly rich colour in that movie was red, and I remember exactly one scene where the red of someone’s cape was striking.

It was a study in beiges, grays and browns. A snooze fest for my eyes.

Fahey: Between the muted colours and the dreadfully slow pacing, I’m surprised I stayed awake through the entire thing. Well, technically I started dozing off during Callum’s final visit to the Animus, but my brother hit me awake after the first snore.

That one sleepy-time incident aside, I spent most of the film riveted for all the wrong reasons. I was on the edge of my seat as Michael Fassbender’s Callum Lynch, following his first journey into his ancestor’s memories, repeatedly told Marion Cotillard how hungry he was, only to be led to a place that did not feature food. “I’m hungry.” “Come with me.” And we’re in a room filled with computers. Someone get that poor man a steak.

Gita: Michael Fassbender was really trying his hardest, wasn’t he? And Marion Cotillard was not trying whatsoever.

Jeremy Irons seems like he was having a blast, though, and I respected him and his turtlenecks.

One thing that really bothered me, and always bothers me, was how all over the map both Fassbender and Cotillard’s accents were. Where was Marion Cotillard’s character from? England? France? The US? The moon, which she does not believe we landed on?

Fahey: Jeremy Irons is a treasure at his worst, and by that I mean the Dungeons & Dragons movie. Since that performance, I just like watching him eat scenery. To be fair, he got to play evil and British, at least one of which he is in real life. Fassbender is a German playing a Spaniard and an American. No wonder the poor man went crazy and started singing in the middle of the movie.

Marion Cotillard might be too French to play anything else.

Gita: Fassbender’s Spanish sure was…. something.

Fahey: I was surprised they decided to keep all of the Animus dialog in Spanish. In the games that stuff is all automatically translated.

Gita: I kind of liked that touch — I would have liked it more had a tall person not been sitting in front of me, blocking my view of the subtitles.

There was a brief moment when I thought I would have preferred a movie entirely set in the past, but then I realised that in the regression sequences I had no idea what was happening.

Fahey: You didn’t miss much. The Animus portions of the movie were a series of fight scenes involving something about a prince and a city and some Templars. Fassbender may have had a girlfriend, or maybe they were just plucky assassin pals. At one point, hanging in a dungeon side-by-side, they touch foreheads and recite the Assassin’s Creed together.

All of that resolves into a big nothing. The point of the Animus sequences are to determine where Lynch ancestor Aguilar hid the Apple of Eden from the Templars. That information is eventually gleaned in a scene completely unrelated to the whole prince/city/Templar plot.

I guess he needs to synchronise with his ancestor’s memories in order to gain access to the correct one. It’s a video game conceit that doesn’t translate to film very well.

Gita: Somehow, Marion Cotillard muttering “leap of faith…” doesn’t have as much gravitas as actually doing it in a video game.

Fahey: My brother and I burst out laughing at that point. Uproarious laughter. It was as if she suddenly transformed into a teenage fan watching the movie instead of an active participant. That and “He’s synchronizing!” 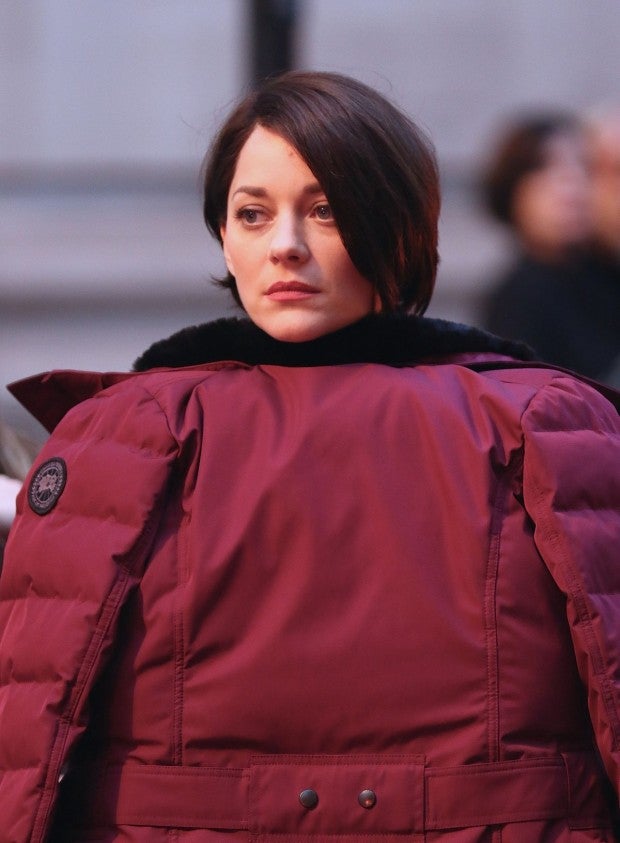 I don’t think Marion Cotillard knows how to wear a coat?
Gita:

Neither of them are gamers but they were into the concept and lore. I told them to get stoned and read the wiki.

Fahey: I’ve heard from folks on Twitter who liked it as well. I just can’t get over all the bad.

Gita: I think if I was folding laundry I’d have enjoyed watching this.

Fahey: Maybe that’s my problem. I am not good at folding laundry.

But I can see how being distracted might keep me from noticing how many times they told Callum that he was their only hope of finding the Apple of Eden and that they needed it to end human violence.

Did you know he was their only hope of finding the Apple of Eden?

Gita: They need it to cure violence.

Gita: I CANNOT believe that was the plot of that movie. Marion Cotillard curing violence. With science.

Fahey: Using a man she rescued from being executed for killing a pimp. Callum Lynch was sentenced to death for murdering a pimp. We don’t see the murder. But pimps are pretty bad, right?

Gita: Did you notice that they never said what the Apple of Eden, you know, does?

Fahey: I understood as much about the Apple of Eden following the movie as I did after playing 100 hours of Assassin’s Creed. It glowed. It’s definitely a glowy thing.

Gita: Even though this movie was absurdly, punishingly long, did you get the sense that there was about a half hour of it that was hastily cut before release?

Fahey: I do like that after centuries of searching it turns out this all-powerful whatsit was sitting in a chest at a church down the street from Abstergo. No digging, no deciphering riddles. Just sitting in a chest. So yeah, I feel like some cuts were made.

Gita: There is definitely a cut of this movie, somewhere, where Callum’s familial relationship is established more, so the ghost of his mum welcoming him into the Assassin’s Creed makes more sense. And there’s definitely a cut where Michael K. Williams gets to, you know, DO ANYTHING AT ALL.

I wish I had seen the version of this movie where the final act felt earned at all. Because that would have been an ok movie.

Fahey: For the benefit of those who haven’t seen the film, the final act features an uprising by the other Assassin ancestors inhabiting the Abstergo facility, as Callum fully synchronizes with his deceased assassin kin, becoming an expert warrior and fully committing himself to the Creed, which he speaks out loud with his dead mother.

Gita: It’s important to note that in the lead-up to this scene, Fassbender whips his shirt off erotically, and remains shirtless throughout. 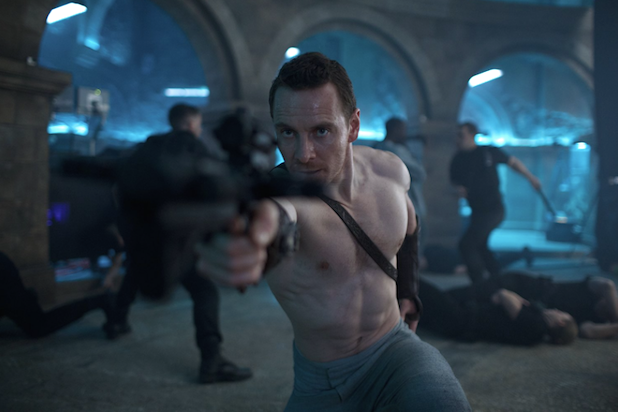 Gita: I don’t know if I’d watch this movie again. But I’d go back for seconds on shirtless Michael Fassbender stabbing things.

Fahey: And climbing. Was it just me, or did you spend part of the movie looking at the scenery, wondering how to climb it?

Gita: Oh for sure.

The one shot I genuinely liked and thought was really, really nicely framed was the final successful leap of faith. The stunts in this movie were great.

Fahey: The leap of faith gave me tingles, yes.

The best part of the ending is how Fassbender, Williams and the equally-underused Michelle Lin, three dangerous fugitives from Abstergo’s compromised testing facility, waltz right through security at Templar headquarters during the a special event commemorating the acquisition of a powerful artifact they’d been fighting over for centuries.

Maybe Fassbender sneaks, but Williams and Lin walk right through the security checkpoint.

Gita: No, Fassbender kinda just has that bizarre conversation with Cotillard and then walks on through.

No one in this movie talks like a person talks. Not once.

Fahey: You are correct. They speak like they’re characters in a video game, and if that was a conscious decision on Justin Kurzel’s part, it’s so crazy it’s brilliant.

Speaking of crazy . . . I am not letting Fassbender’s singing go, Gita.

Gita: You know, it’s so frustrating. I’ve seen Frank. The guy can actually sing! What even was that scene? I feel like I’m having an existential crisis.

Why did any of that happen?!

Fahey: From the mouth-foaming seizure after his first failed leap of faith to the crazy-eyed, howling rendition of Patsy Cline’s “Crazy,” I am at a total loss.

Gita: The entire middle portion of the movie is just a question mark. Nothing that happened for a good 45 minutes mattered. At all. I just remember Fassbender shadow boxing himself.

Fahey: I did get in some good head shaking and sighing and OH GOD THE SHADOW SPARRING. You figure a guy who murdered a pimp would be made of sterner stuff.

As the movie ended, with a shot of three members of a shadowy secret organisation posing on a rooftop for no reason as the camera panned around them, I had an idea for a change that would have made everything about this movie ten times better.