Doom: The Board Game: The Kotaku Review

I never thought we’d get a faithful board game adaptation of Doom, of all things, but here we are: Fantasy Flight’s latest dungeon crawler plays just like the heavy metal first-person shooter, only without all the blood. 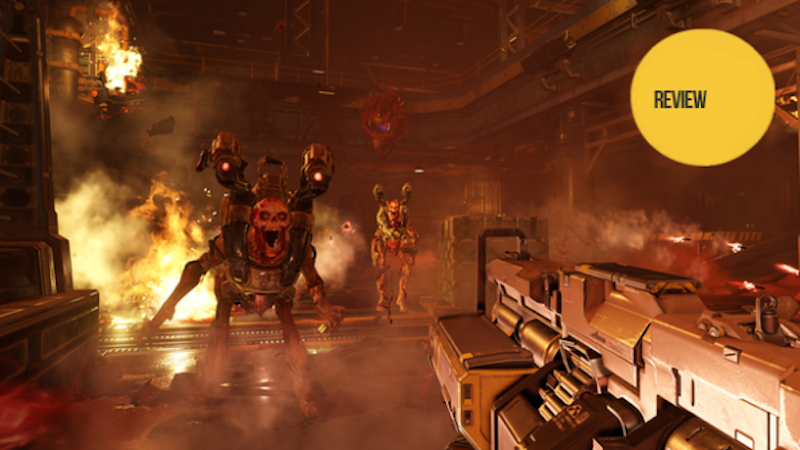 The new Doom, really, is rather like the old Doom. You fight swarms of hulking demons. You never stop moving for fear of being swamped in laser fire, missiles and pile-driving hell knights. Your screen is permanently suffused with explosions, blood and chunks of bodies. You, the Doom Marine, are what stands between an army of demons accidentally unleashed on a Martian mining installation, and domination of our realm. Thank goodness you've access to such big guns.

It’s actually not the first time the company has tried this: In 2004 Fantasy Flight released a board game based on Doom 3. It was pretty good, and helped lay the foundation for a decade of similar games like Descent and Imperial Assault. But while it used the imagery and language of the Doom universe, it felt more like a turn-based tactics game that was simply using the Doom licence as window dressing.

Imperial Assault is a board game that was released in late 2014. I only got around to playing it over the weekend, and I already count those months between as wasted.

Structurally, it’s very similar to something like Imperial Assault (or, for the video gamers in the house, XCOM). Two sides control teams of units, taking turns to move them around a grid-based map while trying to kill each other and resolving combat with dice.

Doom has made a few tweaks to the formula, though, which both bring it closer to the video game in design and make it so fun to play. For one, and taking this directly from the 2016 video game, if you get an enemy below a certain health threshold, they’re “staggered”, meaning you can walk up to them and instantly execute them for a small health boost.

More importantly, though, is the way players — especially the Marines — make their moves.

This looks daunting, but a rocket launcher took care of it real easy.

Most games of this ilk give characters certain equipment at the start of a level then leave them with it, meaning that players are constantly using the same weapons throughout and relying upon a small set of strategies and items available to them.

Each of Doom’s marines are instead a blank slate. You can grab two weapons to start each mission, with more lying around the map for you to pick up. Each weapon gives you a certain number of cards, each with a different move or attack, and these cards are added to a hand which you shuffle at the start of each turn.

Some of these cards will be pretty effective attacks. Some will be attacks that are OK. Some will be defensive, some will have other weird effects. You can only draw a few of them, though, and are restricted to performing only the actions you’ve drawn on any given turn.

Let’s say you wanted to attack a swarm of demons, and you only drew defensive cards. Tough, you won’t be attacking much this turn. That works in reverse, too; sometimes you can be fighting a boss and be in dire need of some protection, but all you’ll draw are offensive cards.

Just… deal with it! The game works like this partly to allow for teamwork, so that different marines can exchange roles across turns instead of settling into familiar character classes. You might be the pointman one turn, bristling with rocket launchers, and next turn you might be hunkering behind someone else, popping off shots from a pistol.

But the main reason is that, when you combine it with the fact that demons can and do spawn all around the marine players, it’s forcing you to react to constantly changing circumstances by thinking on your feet, moving fast, hitting first and asking questions later. 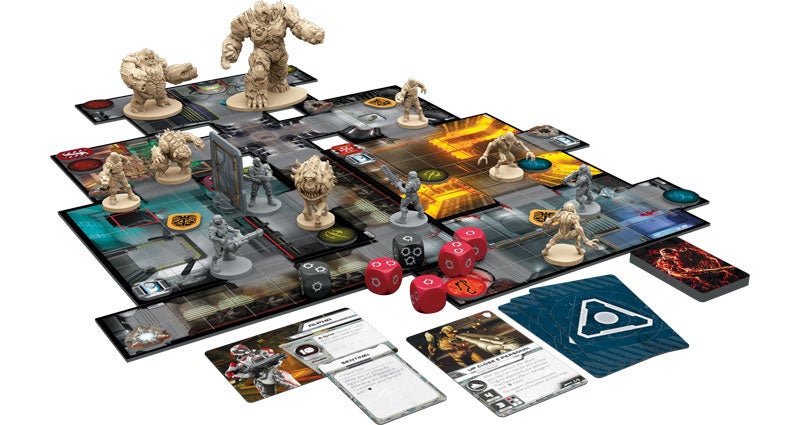 The complete game in action. Running away from the big guys is 100% a valid strategy.

Doom supports up to five players, with one in control of the “Invaders” (you know, demons) and up to four in control of the marines. While the game includes four marines, you don’t need that many players; the game scales depending on how many are at the table, so if there are just two of you, the lone marine gets a ton of extra gear and perks.

The similarities to the video game don’t end at the core mechanics, either. The marine characters can’t really die; if your health reaches zero, you simply reappear at a spawn point and the invaders earn a “fragged” token, with many missions requiring a certain number of kills for the demons to win. Extra spawns can be unlocked across a map by the marines, in effect creating “save points”.

Again, like the “stunned” system I described above, this further encourages fast, ruthless play from the marines, more in keeping with Doom’s bloodthirsty digital tone than the more sedate strategies of other games like this. 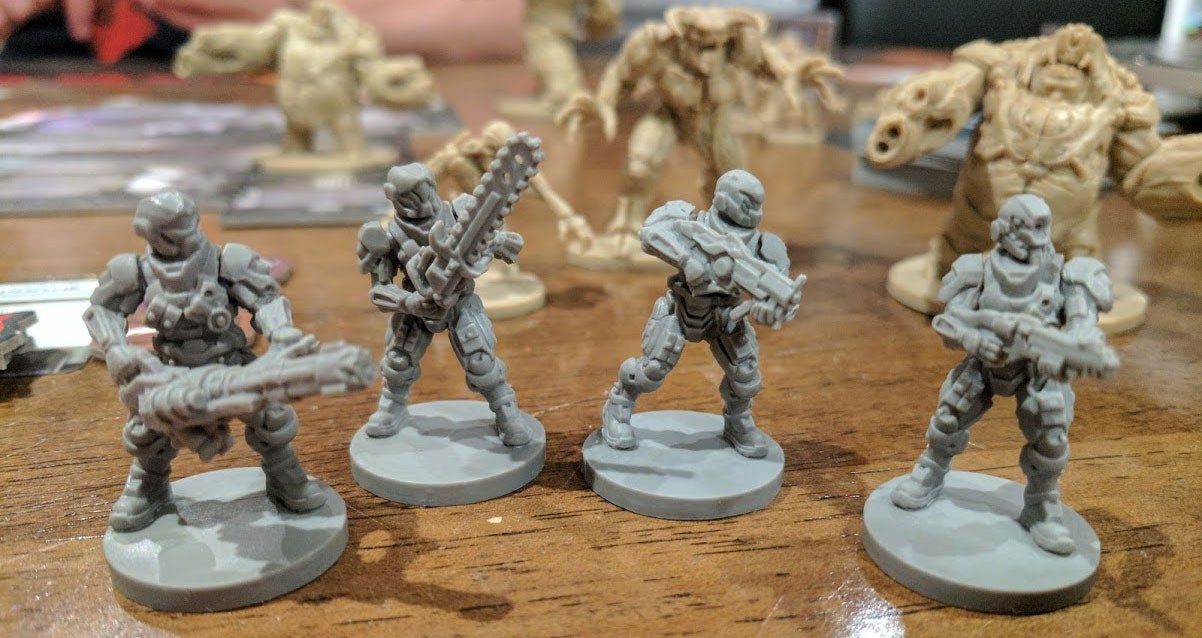 The squad. Note that the weapons displayed in their hands are just cosmetic; any marine can carry any weapon they want in the actual game.

The game isn’t just fun to play, either. In keeping with most of Fantasy Flight’s other big licensed games of late, it looks amazing as well, with some absolutely stunning miniatures (the larger demons especially) along with two-sided map tiles that have a human colony on one side and the depths of Hell on the other.

It was going to be tough for Doom to suck, since so much of the game’s core is built upon other games that we already know are pretty great. Still, I wasn’t expecting it to be this good! A video game based on ruthless action and non-stop bloodshed seemed an ill fit for a board game genre about making slow, tactical decisions, but the changes made to Fantasy Flight’s combat here have worked wonders, and made Doom a fitting stablemate for anyone down to play a game like Imperial Assault, but in Hell.