Half An Hour With The Nomad: Mass Effect Andromeda’s New Mako 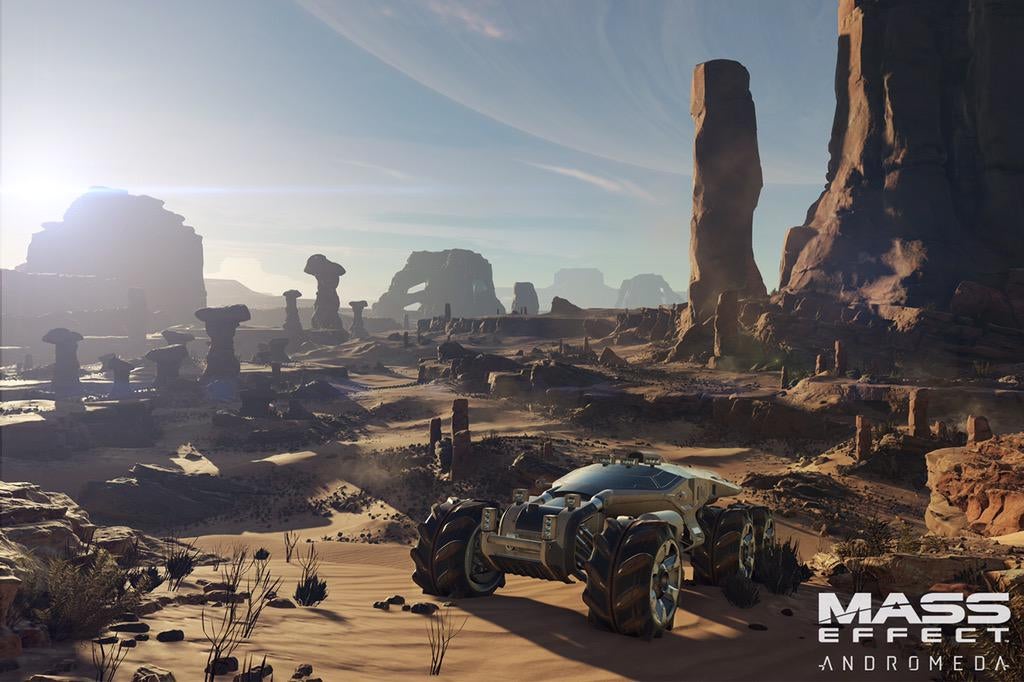 Everyone who’s played the original Mass Effect will remember the M35 Mako. It was an awkward, necessary game feature that became part joke, part legend. So when Bioware announced that the Mako was coming back (as the Nomad), it came as a bit of a surprise.

In the original Mass Effect, the Mako was a ground-based armoured vehicle that boasted a mass accelerator cannon and a machine gun. You hopped into the Mako both to complete important story missions and just to explore optional planets for resources and information. The Mako was notoriously difficult to control, and anyone who managed to complete the drive up to Peak 15 without driving off the edge multiple times deserves a medal.

I forgot how much I hated the Mako

After this difficult introduction to the series, the Mako was stabled (or rather, garaged) for the rest of the trilogy, serving only to be the butt of jokes, and occasional object of James Vega’s fierce dedication. And yet while no one missed the Mako’s wonky controls and gravity-defying physics, a lot of players missed the freedom that it offered, according to Bioware’s Fabrice Condominas:

“The decision [to bring back the Mako] actually came fairly quickly, because we wanted exploration to have a significant role. You need a vehicle to explore. Was it an easy decision? No. It was an obvious decision for the setting, but there were definitely concerns about what type of memories the Nomad would bring for players of the trilogy.

“When we actually started talking to the community, to the core veterans of the trilogy, we realised that when we showed vehicles, they were very interested. We would already see smiles on their faces and the jokes started firing and all that, but they also associated that with that feeling of discovery in an uncharted world, in Mass Effect 1.

“So what represented the Mako, or the essence of the Mako, was actually very important to them. They got very, very excited very quickly — with the caveat of ‘just… do it well.’ And we focused on that, on the execution, and working on Frostbite with EA we even sent early builds to the Need For Speed team so we could get their advice.”

Hands On With The Nomad

This week I got my hands on Mass Effect: Andromeda for a couple of hours, and I played a small chunk of the game that include a mission in the Nomad. The Mako may now be called the Nomad, but they’re fairly similar in both design and function. You can access it from a number of hubs in open exploration zones, which also appeared to act as fast travel points that you had to first drive to to unlock.

First things first — yes, it drives a lot better than the good ol’ Mako. While I didn’t have to navigate any tricky sections like the ones that tended to be the Mako’s downfall in Mass Effect, it was easy to keep to the road and I daresay even fun to drive at times.

Is it still the cliff-climbing beast that the Mako was? Whether you think it’s a good thing or not, the Nomad has a far more normal range, able to do some pretty intense off-roading but this time with some definite limits. You can still also boost-jump, but it’s not quite the physics-breaking powerhouse it used to be. In addition to the jump-jets, you also have a forward boost, which is nice to both extricate yourself from difficult positions (I still managed to get stuck a couple of times) and escape from enemies. Which brings me to my next point…

One of the biggest departures from the Mako’s design is that the Nomad appears to have no weaponry. While the Mako was decidedly hard to actually use in combat, it was useful to at least have something to defend yourself with. In Andromeda, when hostiles appeared along the road I instead had to either drive on through as fast as I could, or stop the Nomad, get out and engage the enemy on foot. Ain’t nobody got time for that.

The Nomad also has two different ‘modes’ — one a slower, off-road mode and the other a faster, more maneuverable one. In the video above, you can see the selected ‘mode’ displayed in the bottom left hand corner at around 1:52.

I didn’t see the point of switching to the slow mode at all until I came to a muddy stretch of hill that was impossible to climb in ‘fast’ mode — after switching to off-road, I crawled right up that hill with no problems. While this was the only time I had to use it in that mission, I have to wonder what other ways we’ll be able to use that functionality in the full game.

My final thoughts? I think it’s going to work. Of course not everyone is going to enjoy taking long drives to get to mission-critical points, and some people are going to spend most of their game time driving around whether it’s good or not, but I think Bioware has finally managed to do it right this time.

I’ll always have a soft spot for the original Mako, though.