How I Convinced Myself To Buy My First Gaming PC 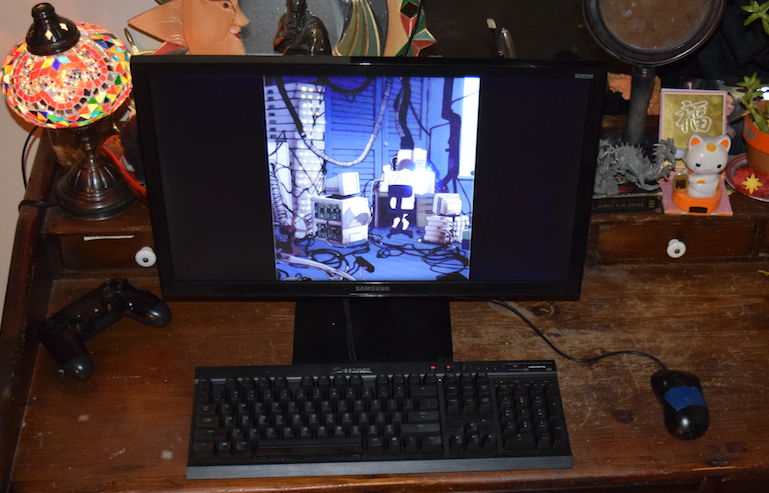 My desk, complete with my new gaming PC and several toys.

Nothing tests your resolve to identify a certain way like a big, bank-breaking purchase. In December, after five years of back-and-forth, I took the dive and bought a gaming PC. Until I was standing in the Micro Center checkout aisle with a big, stately “PowerSpec” box in my cart, I kicked and screamed the whole way there. “Buying in” is a scary thing, especially when your lifestyle is still possible, but significantly compromised, without doing so.


Prior to pulling out of the Micro Center parking lot, I played Overwatch or Final Fantasy 14 every day on a powerful laptop that needed some deft jerry-rigging to run new games and, for most other things, loaded up my Xbox One. I didn’t want to drop a month’s rent on hardware. And I didn’t want one of those glowing, green gaming PCs equipped with fangs and pincers. For me, there was also the damningly impossible question of “How much PC gaming is enough to justify a gaming PC?” In the end, it was a simple calculation: an unequipped laptop vs. the royal treatment, minus $US1,000 ($1,306).

Getting here took five years, in part, because of a conversation I had every year with a Best Buy employee. It goes like this: I’m wandering around their PC section, checking out their wares or shopping for a new laptop, and I’d encounter some Alien vs. Predator-style gaming rig, with toothy grating, promising to “push optical limits” or “maximise gaming performance,” the copywriting equivalent of steroids. Always, at that moment, a salesperson would initiate this conversation:

“Well, I write and report, so processing speed is important. I stream television. I also play video games, often online.”

“Oh, so do you want a gaming PC?” they reply. “It sounds like you need a gaming PC. What kind of graphics are you looking for? How much memory? Solid state or-.”

Here, I always shortcircuited. It seems like a simple enough computation — play video games, purchase gaming PC. It’s the last thing I mention, and yet, it’s the most important factor determining which tool I will choose to go about my increasingly online life. It’s not just a matter of “next-gen tech” and “powerful gameplay.” It feels, in a way, like this bored, run-of-the-mill Best Buy employee stands before the gate that leads to some gilded tower of PC gamers. It felt like I wasn’t serious unless I was serious about framerate. I wasn’t a player until my walls reflected the soft glow of a blue LED fan. Buying a gaming PC is just as much an investment in who you are as it is in how you’re gaming. 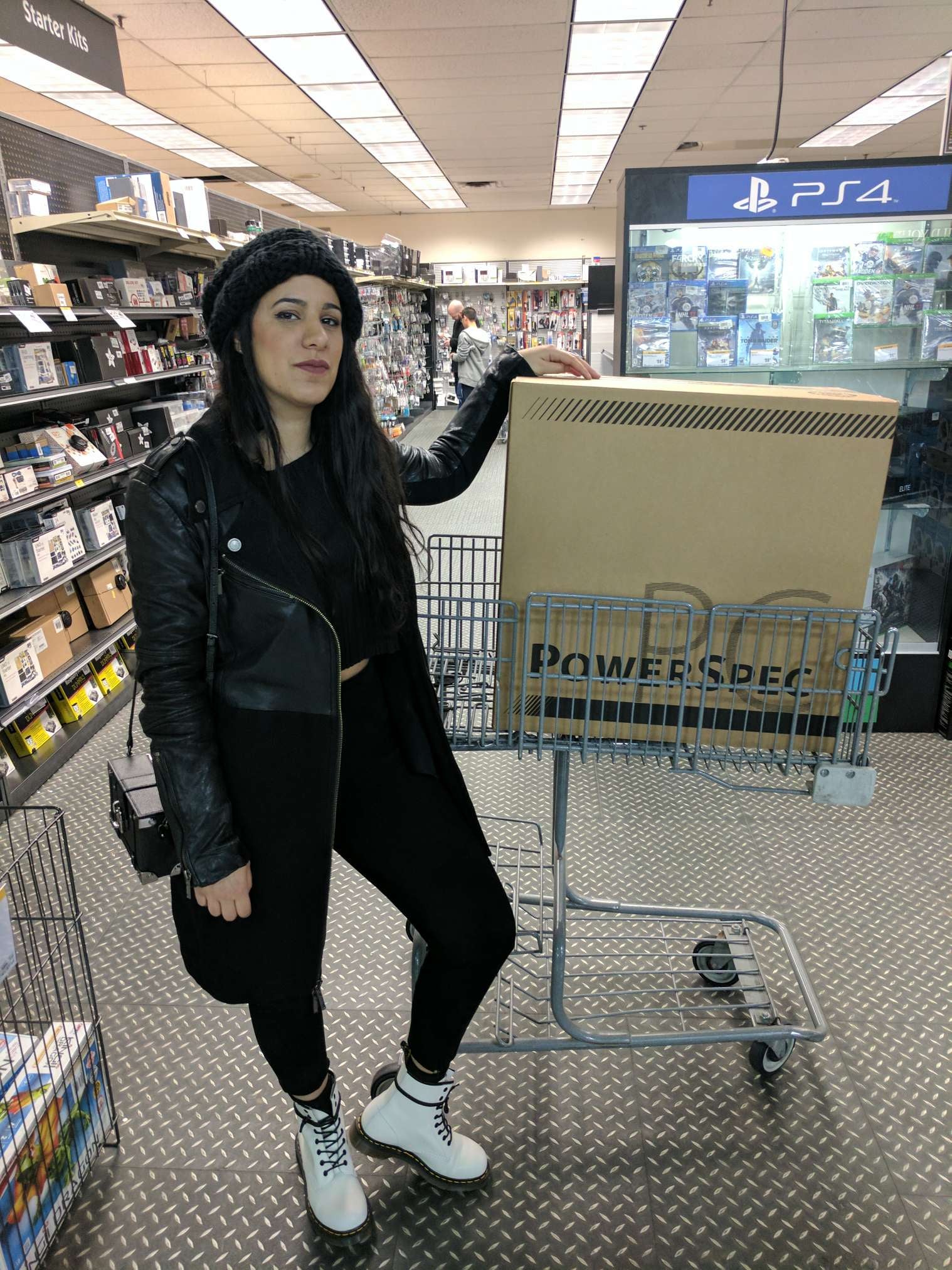 Me, with my new friend.

But after being hired by Kotaku, how I related to a gaming PC started to change. What seemed like an identity calculation that only transpired in the aisles of Best Buy became part of how I do my job. It’s a sort of insurance for running future games with less difficulty, for being able to get more out of games I already play by having beefier hardware.

That’s only half the truth, though. I bought a gaming PC, in part, because I like winning in Overwatch. Since it’s team-based, your teammates know if you’re lagging on your rush out of the spawn point. Also, Overwatch isn’t one of those games where it’s fine for your computer to overheat in the middle of a competitive match. That’s the beast I was wrestling.

To play Overwatch on my HP Envy laptop, with its Nvidia GeForce 930M graphics card and its i7-6500U microprocessor, I had to construct a somewhat elaborate superstructure that involved two to three fans and, occasionally, a dictionary. My Envy is not a bad laptop by any means, but four or five matches in, it would get hot and angry and hiss. Most of the time, it would shut down without warning — just a small sigh. Its Overwatch aversion was a little confusing, since it ran all my other PC games just fine — Final Fantasy XIV, most importantly.

To appease it, I purchased a cooling pad with a fan inside and a mini fan that sat on my desk and blew into its fan. Sometimes, I put a dictionary under it to get just the right angle or leaned it against some books just so. When none of that worked, I dragged my 1.22m floor fan next to my desk and directed its wind into the desk fan which, in turn, blew into the laptop fan.

After a while, my laptop just stopped having it. My bosses eyed me as I made my bi-weekly pilgrimage to Staples, insisting it was time. Staples’ technicians warned me that it was only going to get worse unless I got a rig more suitable for gaming. 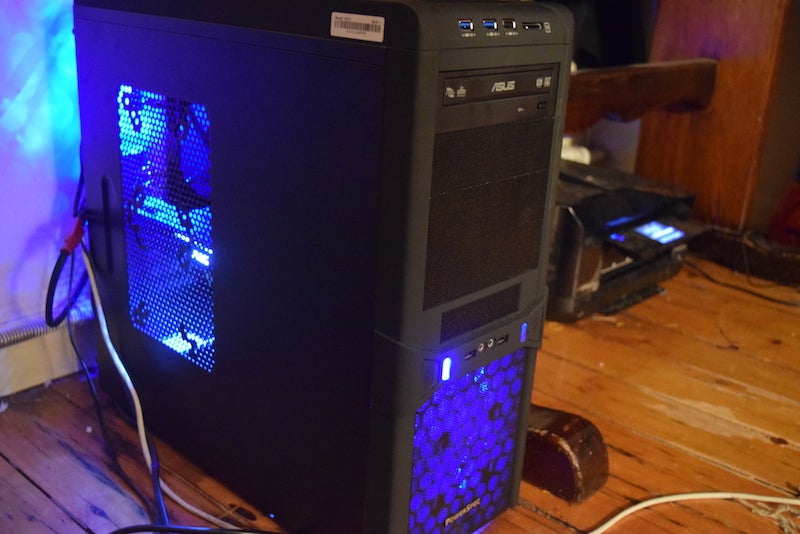 My first impulse was to build one. I would go on PCpartpicker.com, and, with requisite research, piece together a custom build. It wasn’t particularly intimidating — as Kotaku managing editor Riley MacLeod said, “Building a gaming PC is just like grown-up Legos.” I reasoned that by building my own PC, I would familiarise myself with its internal organs and, if something broke, I could identify the problem myself.

It would be an exciting challenge and teach me a new, useful knowledge set. That was my plan, and if you ask my friends, I wouldn’t shut up about it.

But on December 26th, while I was home over the holidays, I took my parents’ car to a Virginia Micro Center to purchase a more powerful cooling fan for my laptop, hoping it would hold me over until I mustered the courage to order parts. Micro Center is a vestige of early computing, one of the few brick and mortar computer stores where, in my experience, salespeople always seem knowledgeable and never pushy. When I entered, I saw the sign hanging over their desktop section and made a beeline there, forgetting my original task. All of the employees seemed busy, so I could wander around without anybody quizzing me on my gaming habits or dream specs.

As I looked over the glowing green towers and jagged, toothy rigs, a few larger but more innocuous desktops caught my eye. There was a table with about five two-foot-tall towers, each with at least two ventilation grates and top-notch graphics cards, all under about $US1,100 ($1,437) — not an insignificant sum, by any means.

A customer, not a salesperson, approached me. “Hey, I don’t mean to bother you,” he began, “but I have that PC. It’s amazing.” I immediately shot him a dozen questions and, enthusiastically, he explained that, yes, it handles Blizzard games with maxed-out settings and, absolutely, he does not regret buying a pre-built gaming PC. A salesperson joined the conversation, noting that the graphics card alone would cost $US500 ($653), only $US300 ($392) less than my DIY price limit.

Purchasing each of its parts separately, the PC would have cost about $US1,300 ($1,698). Considering the specs, it was a steal. Also, it has space for another graphics card, so if in five years my 1070 wasn’t doing the trick, I could just add another. 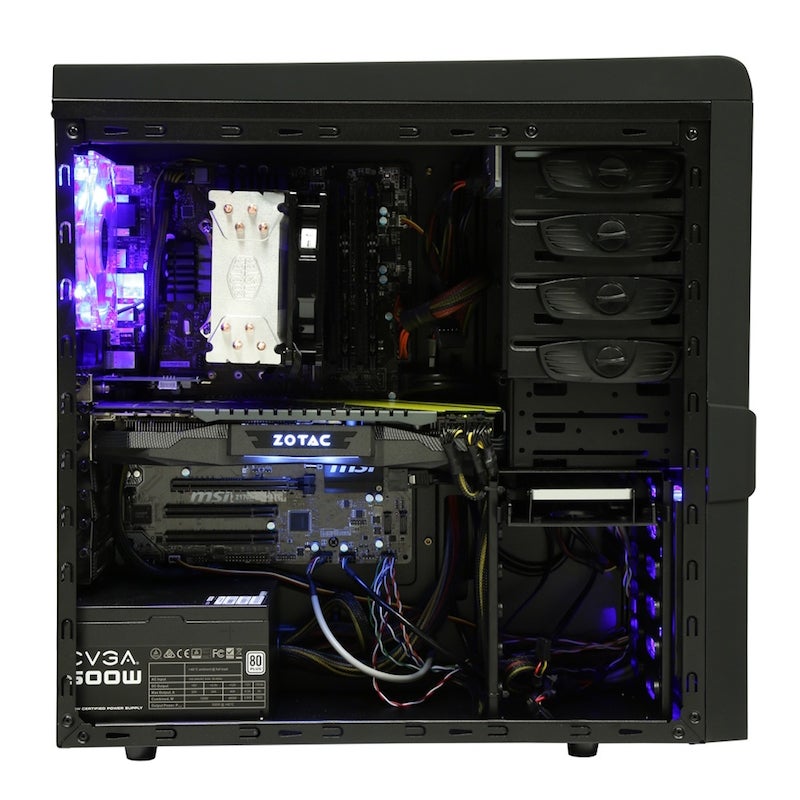 Perhaps it was impulsive, but I bought it. I took it back to New York and hooked up a discounted, but new, 21″ Samsung monitor. I crammed the enormous 18 by 18cm tower under my desk. The keyboard was a hand-me-down from my dad, who accidentally purchased a Corsair mechanical keyboard for himself off the internet and was deterred by the clanking. My mouse, honestly, I could care less about. I found it in a box in my room.

After installing Windows and running a LAN cable through the apartment, the first thing I did was download Battlenet and play Overwatch. As a Roadhog main, my hook percentage is at least five per cent higher now that the game runs better. I’ve picked up some offensive heroes who require cutting reflexes now that I have a rig that can handle it. And, galvanised by this sudden boost in performance, I solo-queue in competitive mode nearly every night now.

I’ll add that, in the past, I was afraid to speak up in voice chat because I am a woman. Now, I am unafraid. I have a new confidence stemming from boosted gameplay and, frankly, “buying in.”

Perhaps it’s all a mindgame. And, undeniably, I was a victim of some very good marketing from the PC gaming industry. I think back before I felt comfortable making this sort of big, meaningful purchase and wonder what was stopping me aside from price — impromptu quizzes at Best Buy, the super-fanatical culture of PC gaming? There are mental barriers-to-entry and traversing them are scary, even aside of money, and especially when they’re reinforced by others who already made the financial leap and constantly seek to justify it. But it’s a sad truth — “buying in” is a way of feeling at home.