Pewdiepie’s Shock Humour Is Par For The Course On YouTube 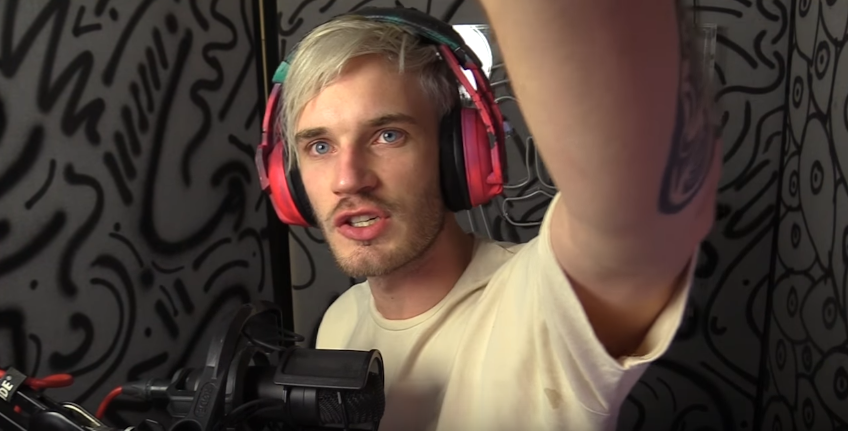 While Pewdiepie makes headlines over a “death to all Jews” stunt that backfired, the kicker is that such antics are not an anomaly on YouTube. The open secret that everyone knows but nobody really talks about: Many of YouTube’s popular nerdy figures are openly “offensive” in an attempt to push back on a world that they believe is too politically correct.


Earlier this month, one of the biggest controversies on YouTube unfolded between entertainer iDubbbzTV and hyperbolic vlogger Tana Mongeau. To make a long story short: Mongeau had a history of using the N word in a derogatory way. At some point, Mongeau tweeted in disbelief that iDubbbz openly uses the N word in his videos, and angrily suggested that he should kill himself because of it. iDubbbz, smelling the blood of hypocrisy in the water, took a road trip to slyly confront Mongeau in person over the whole thing:

In what is now an infamous event, iDubbbz bought a ticket to a Mongeau meet and greet, went up to her, hugged her and, instead of prompting a photo with “say cheese”, happily asked her to “say n****r”. She didn’t. iDubbbz got kicked out, and Mongeau went on to make it sound as if iDubbbz was trying to physically attack her — the video shows him hugging her — rather than just trying to make a joke.

By iDubbbz’s own admission, it was a terrible joke. “I replaced ‘say cheese’ with ‘say n****r’,” he said in his video addressing the squabble. “How funny is that? Not really funny, but what is funny is your reaction to it.”

The stunt wasn’t very good, but it blew up anyway. You had two white people arguing over a racially charged slur, as well as bubbling desire to see Mongeau taken down a peg for making outlandish clickbait videos. iDubbbz’ video alone racked over eight million views despite landing significantly later than the videos initially reporting and commentating on the incident.

Pulling back a bit, the bickering between the two YouTubers acts as a battleground for a larger ideological debate that iDubbbz summarises when he says “context is important”. Mongeau has a history of using the N-word carelessly but more recently changed her tune on it and, on a more progressive note, has said that it doesn’t matter how you use the N-word: It’s always racist. People like iDubbbz hate that idea, and believe it is shortsighted and harmful.

“All of you people out there who hold these words at such high esteem, you are giving it the power that you so desperately want it to not have,” iDubbbz said. His position is that either all slurs should be held to the same standard as the N-word, or none of them can hold that power. He also believes that saying supposedly offensive words makes them less offensive.

The schtick of parroting offensive words left and right, as iDubbz does, is seen as an act of defiance. In a different video podcast with YouTube entertainer Ethan Klein (AKA h3h3Productions, who you might know as the man who brought the CS:GO Lotto scandal to the mainstream), he described iDubbbz as YouTube counterculture of sorts.

“You’re very anti-PC,” Klein said. “YouTube is a space that caters to like, Disney-esque characters. They love them. And in a time, it’s so hard to be un-PC. Ian [iDubbbz’s real name] is a guy whose slogan is ‘n****rfaggot,'” Klein boasted. For a while, the podcast devolves into Klein using the N-word over and over again.

Klein, who is friends with Felix Kjellberg of Pewdiepie fame, also uploaded a defensive video yesterday with the same underlying argument about context:

“Hitler standing on a pulpit screaming ‘let’s kill all the Jews’ is not the same as Pewdiepie doing a little goof on Fiverrr,” Klein said. “Context matters. Use your fucking brain, guys.”

This is the landscape on which Kjellberg and comedians of his type operate: He expects that the viewer will use their judgement to understand that he doesn’t mean it when he pulls a stunt involving the words “Death to All Jews”, in the same way iDubbbz supposedly doesn’t “mean it” when he runs around saying the N-word. “I think of the content that I create as entertainment, and not a place for any serious political commentary,” Kjellberg wrote on Tumblr. “I know my audience understand that and that is why they come to my channel.”

It sounds rational, right? This framework asks you to consider the spirit of the person involved to discern who the “real” racists are. To an extent, everything is open to interpretation, but the zeal to be as cavalierly outrageous as possible can also serve as an excuse to say anything and blame any negative interpretation on the audience. The problem is that the scheme does not work, as some people cannot always tell when Kjellberg is joking.

He expects that the viewer will use their judgement to understand that he doesn’t mean it when he pulls a stunt involving the words “Death to All Jews”.

Kjellberg likes to use a variety of cartoonish, exaggerated voices for comedic effect, but he is not consistent with them. This is why his own fans could not tell if he was kidding when he initially claimed that he would delete his channel at 50 million subscribers: He turned to the camera and, in a serious tone, swore he would do it. He didn’t, of course, but fans got so worried they were downloading dozens of his videos just in case. Kjellberg’s own fans cannot always tell when he is being genuine, and that opacity makes it easier for white nationalists to co-opt Kjellberg’s Nazi references. Those people hide in plain sight, using the shroud of “Do they actually mean it, though?”

Kjellberg himself has acknowledged that his humour hasn’t been landing well lately. In recent months he has been distancing himself from his early scream-filled YouTube persona through the use of more sarcasm, and his cracks at this new Pewdiepie are misunderstood by fans and media alike.

“I think the thing is that I have a lot of younger audience [members], and I think my humour got drier, and they don’t get it,” Kjellberg recently said.

Pewdiepie has been getting heat for some of his more outrageous attempts at humour for weeks. His response has mostly been defiance, doubling-down on the Nazi references while saying his critics, particularly the media, just didn’t get the humour. For many top YouTubers this is the game: Be shocking, be outrageous, push back on PC culture and get the views. Sometimes their supposed jokes will land and sometimes they will blow up in their face.