The 2017 New York Toy Fair starts this weekend, and as we prepare to venture into its halls and check out the toys coming out over the next year, we’re looking at some of the fun stuff you can get right now. Stuff like the latest Marvel Legends build-a-figure series, starring some of the greatest heroes in Guardians of the Galaxy history. Also, Darkhawk. 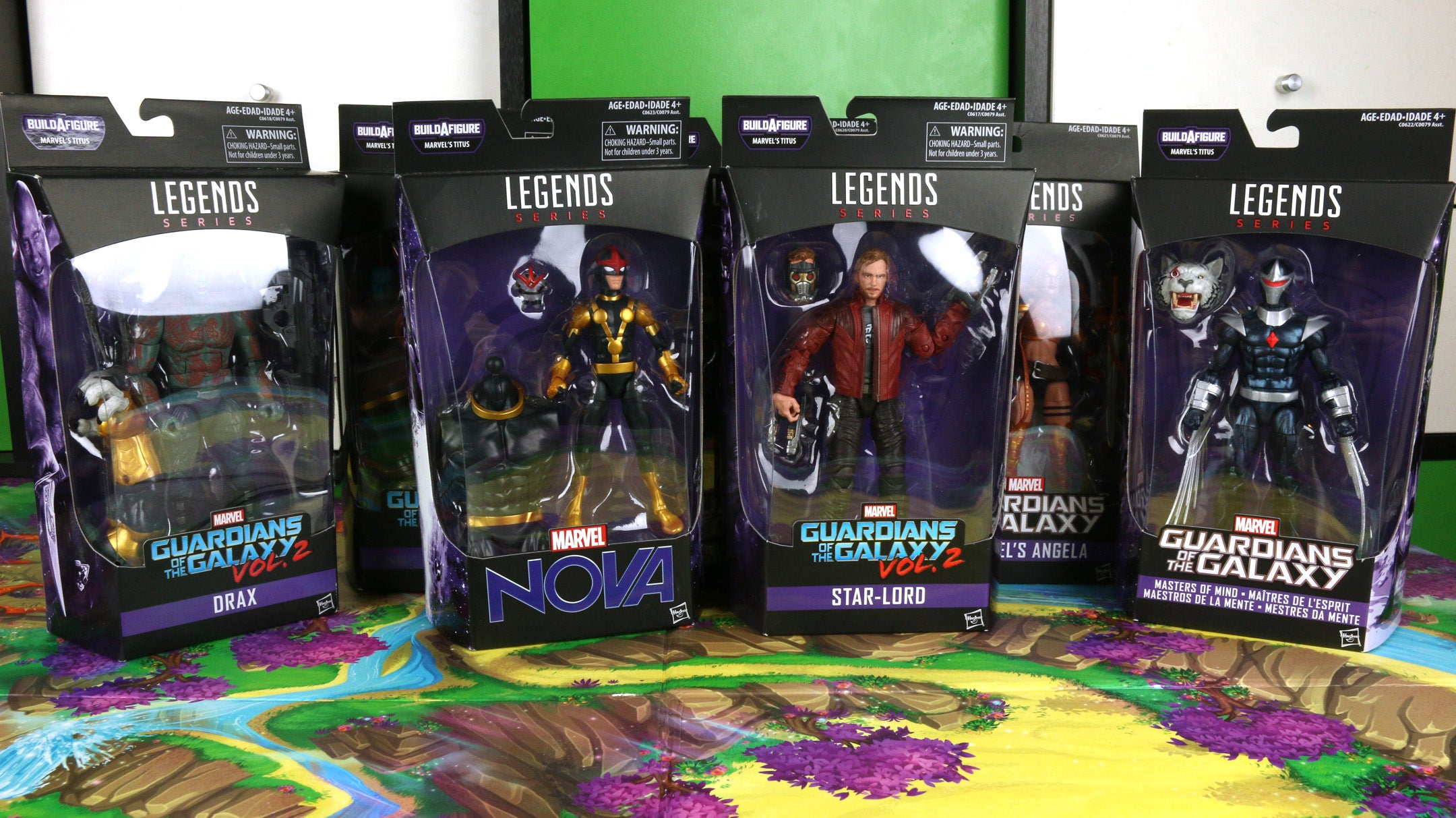 Yeah, Nova hasn’t been a Guardian either, but I really want him to be.so he counts.

The set of seven six-inch figures features two different types of Guardians of the Galaxy branding. Three are tagged with the Guardians of the Galaxy Vol. 2 logo and feature characters as they appear in the upcoming movie sequel. Another three rock the basic logo, indicating comic book ties that aren’t (yet) being explored by the movies. And then there’s Nova, who is just the best. You leave Sam Alexander alone. 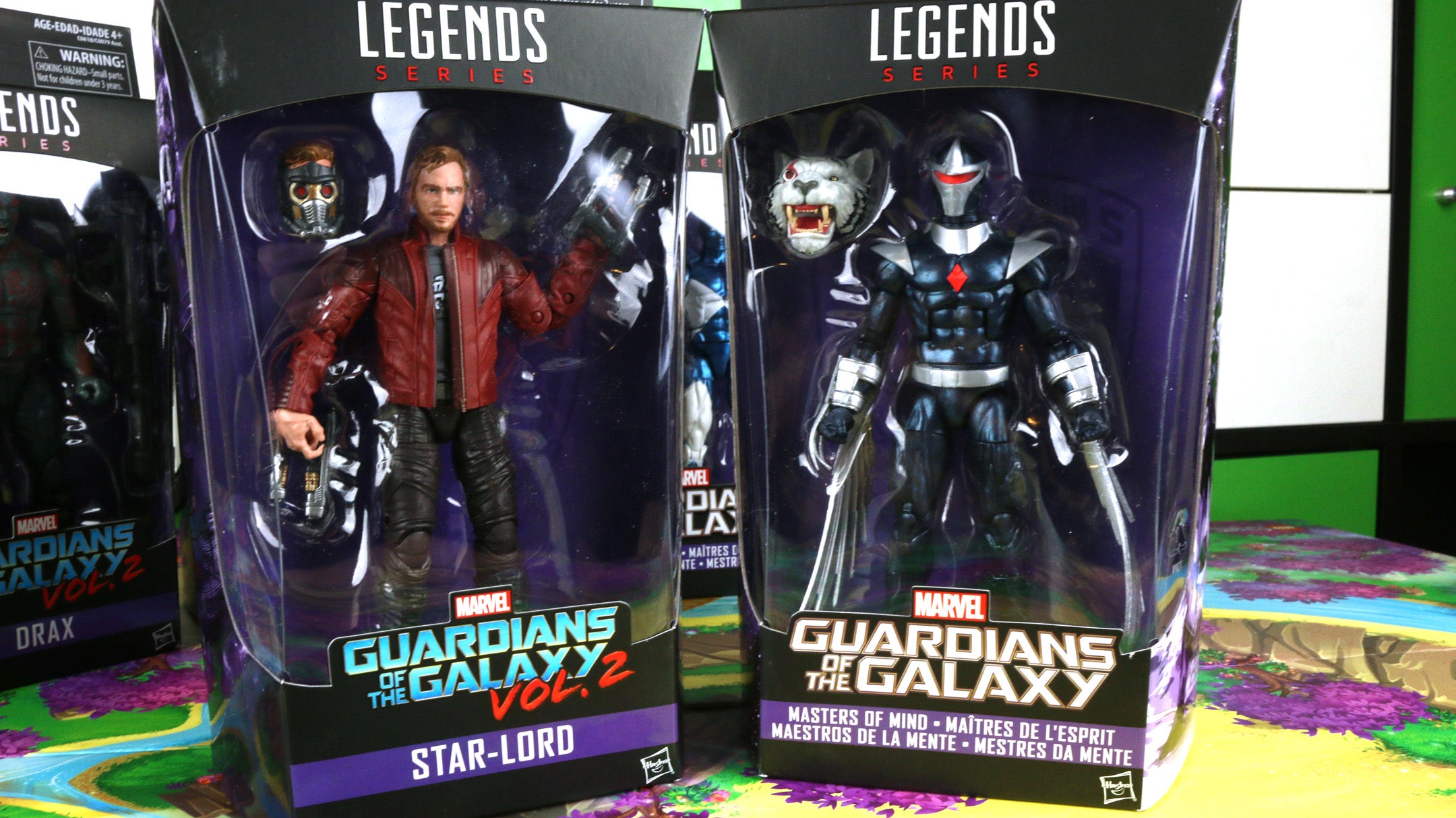 Darkhawk’s inclusion is strange, though he does operate on a galactic level, so who knows.

Arguably the star of the set, Star-Lord is a reasonably likeness of Chris Pratt in six-inch plastic form. 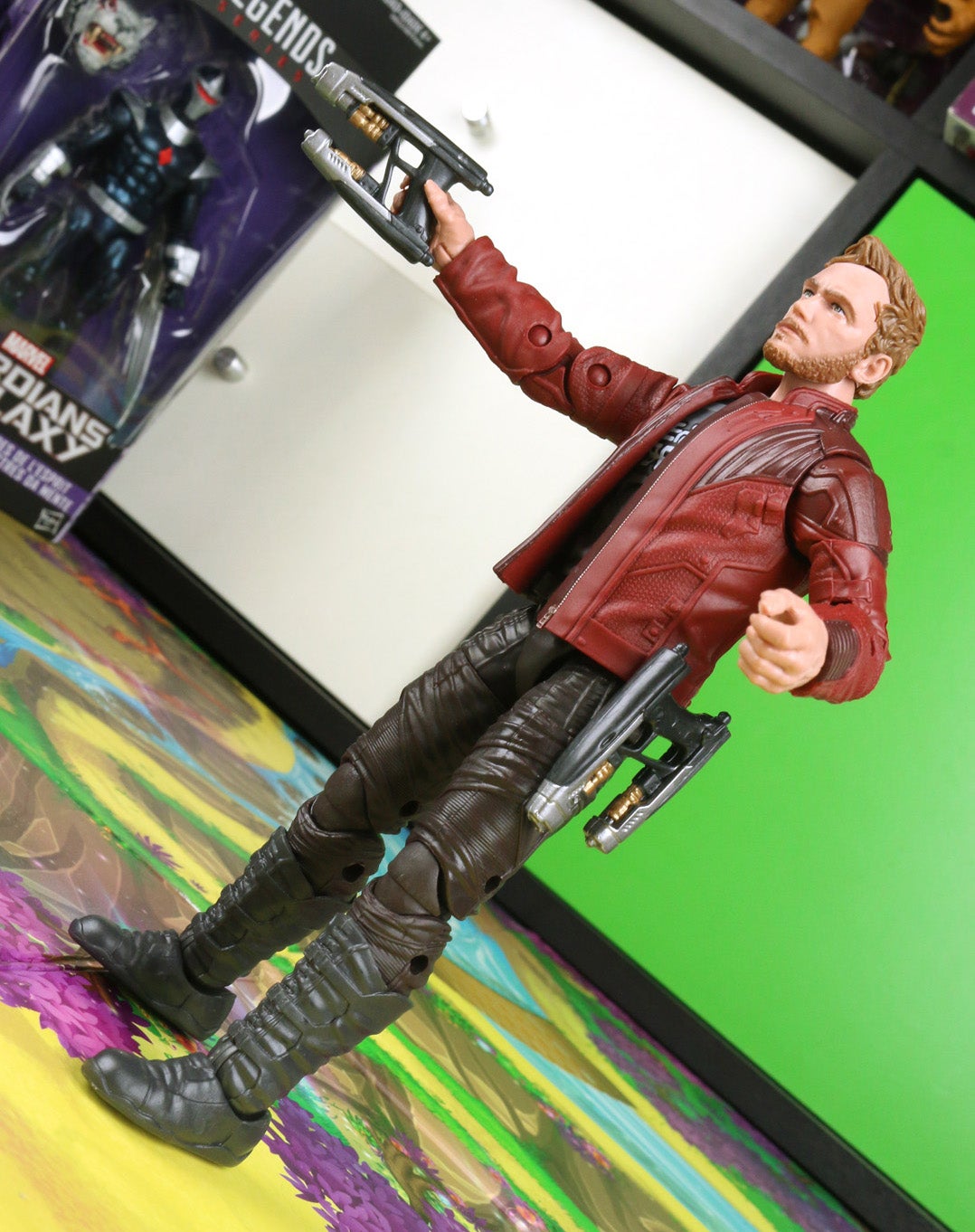 AKA the two space-gun kid.

This is pretty much as close as you’re going to get to reproducing an actor’s head at the $US19.99 ($26) price point. I’m impressed. 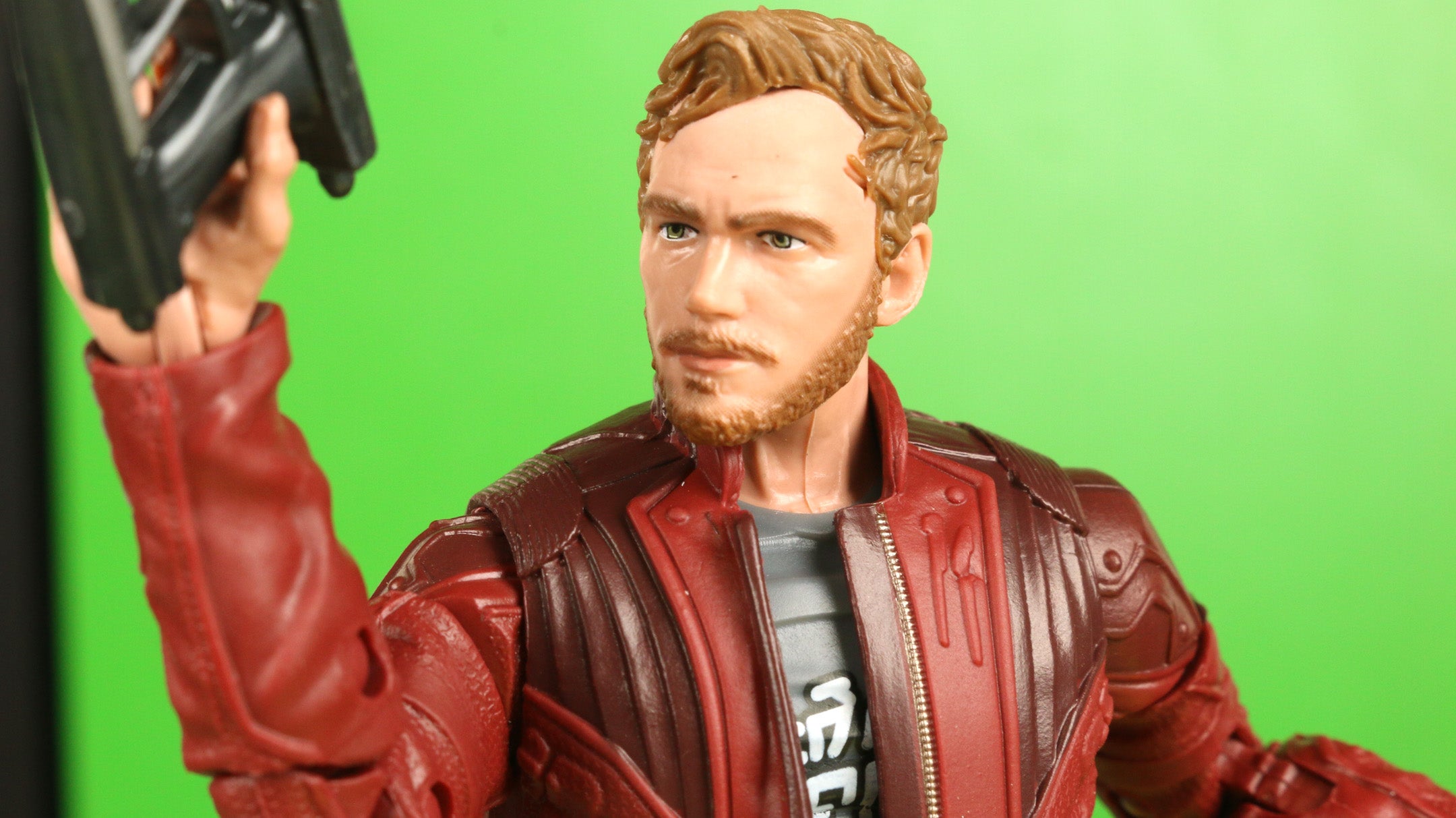 Though I still want a chubby Parks N’ Rec variant.

In case the face isn’t good enough, you can always swap it out for the masked Star-Lord look with a head swap. 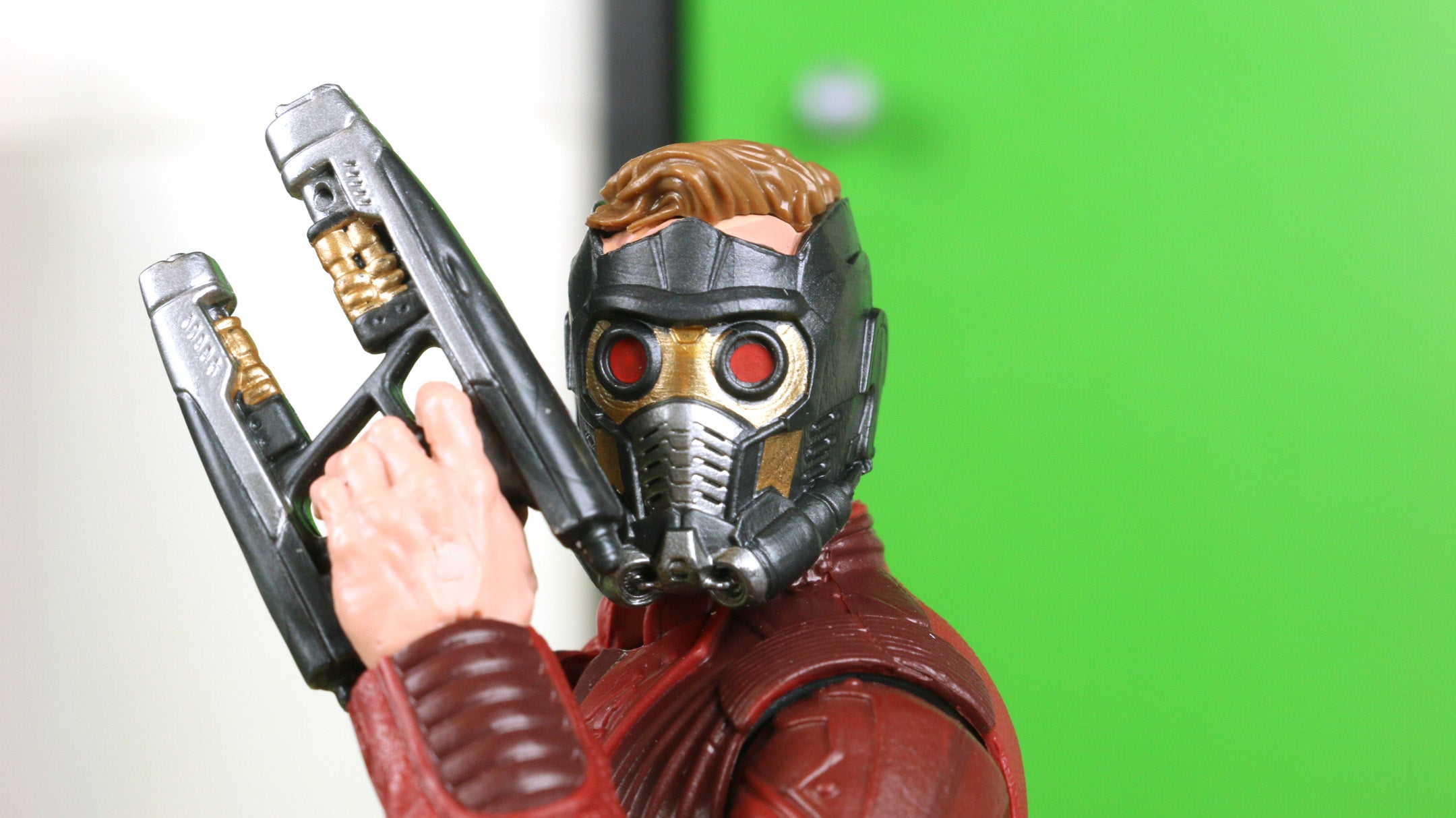 Continuing down the line of movie figures, Drax only gets one head, and it’s constantly screaming. He’s so mad. 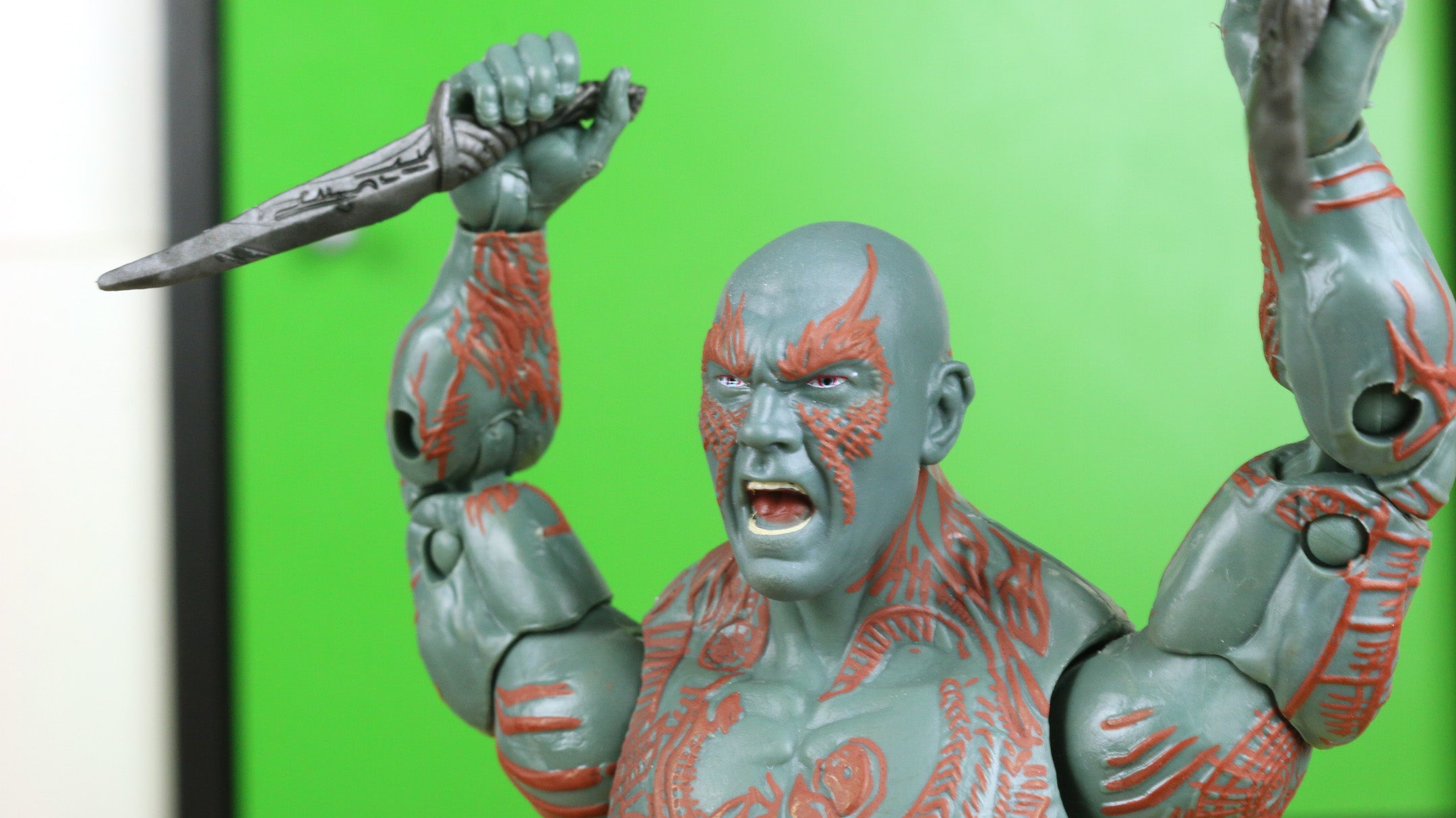 Drax is mad at you.

He yells at everything — the fact that he’s a retooling of an older toy, the pack-in build-a-figure arm he comes with. 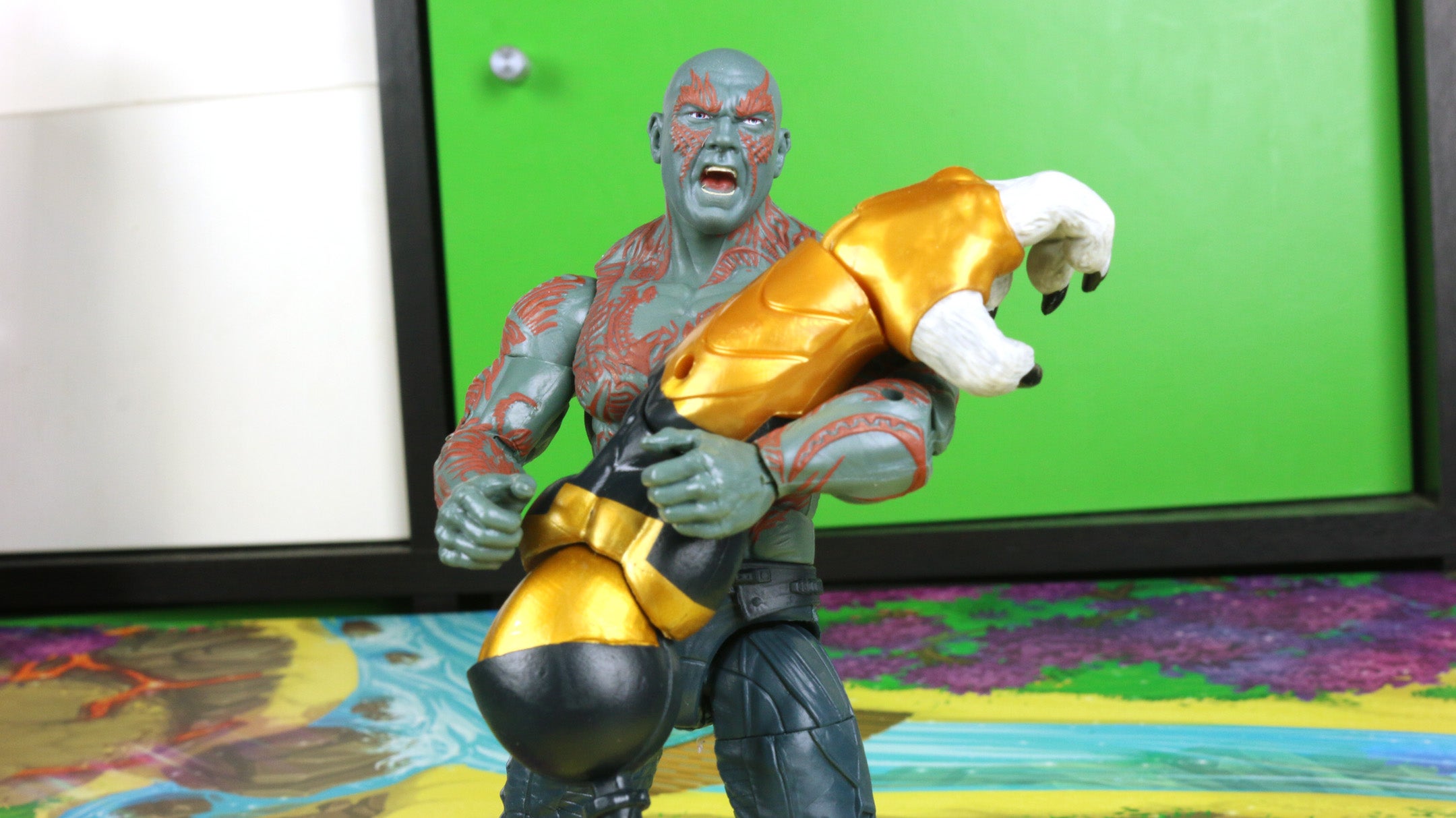 I can believe Drax holding a giant severed arm.

He even yells at his impossibly large gun. Poor Drax. So angry. 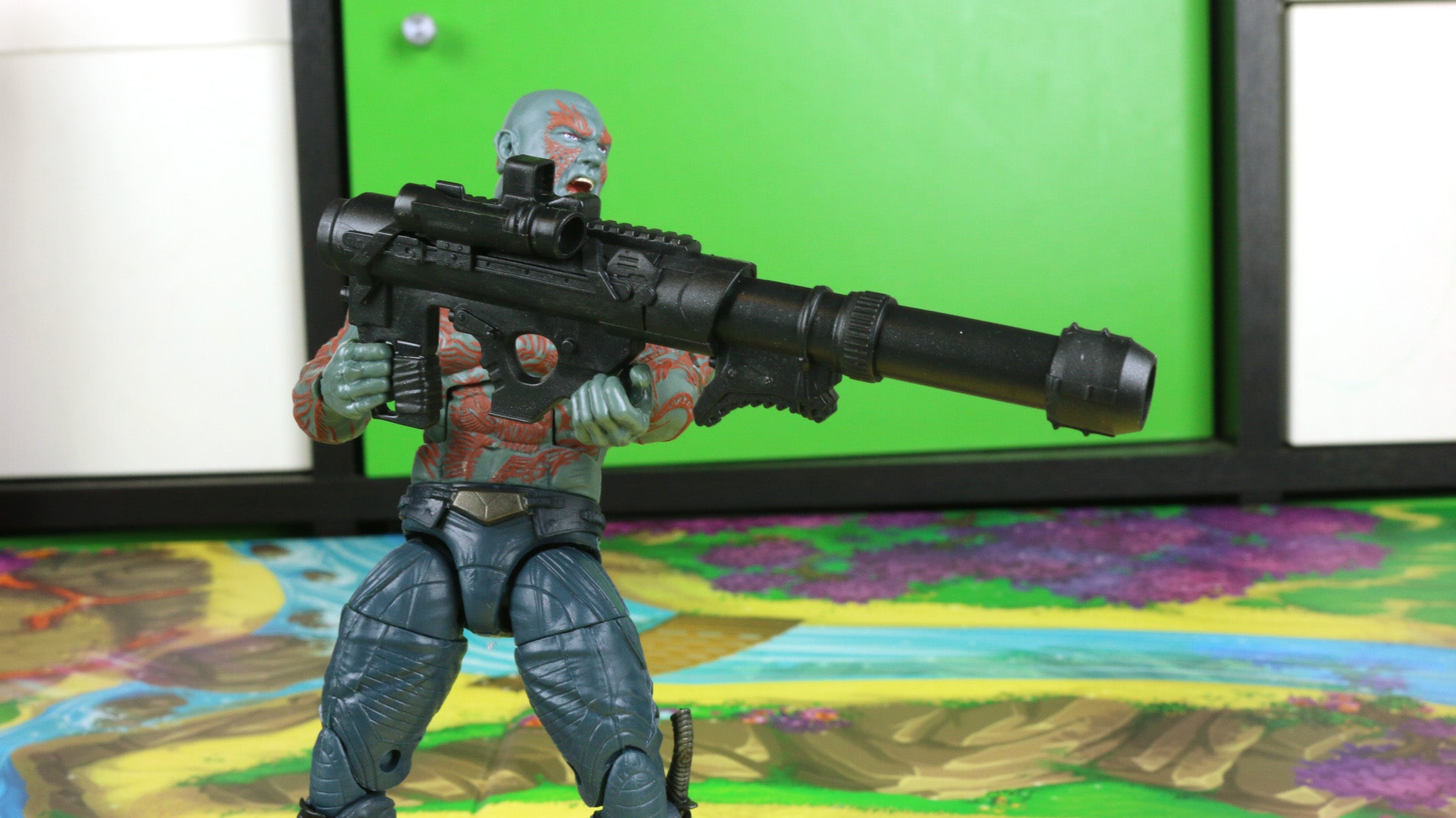 Yondu isn’t angry. The blue-faced member of the original Guardians of the Galaxy comic book team joins the movie group this time around, so he’s got nothing to be mad about. 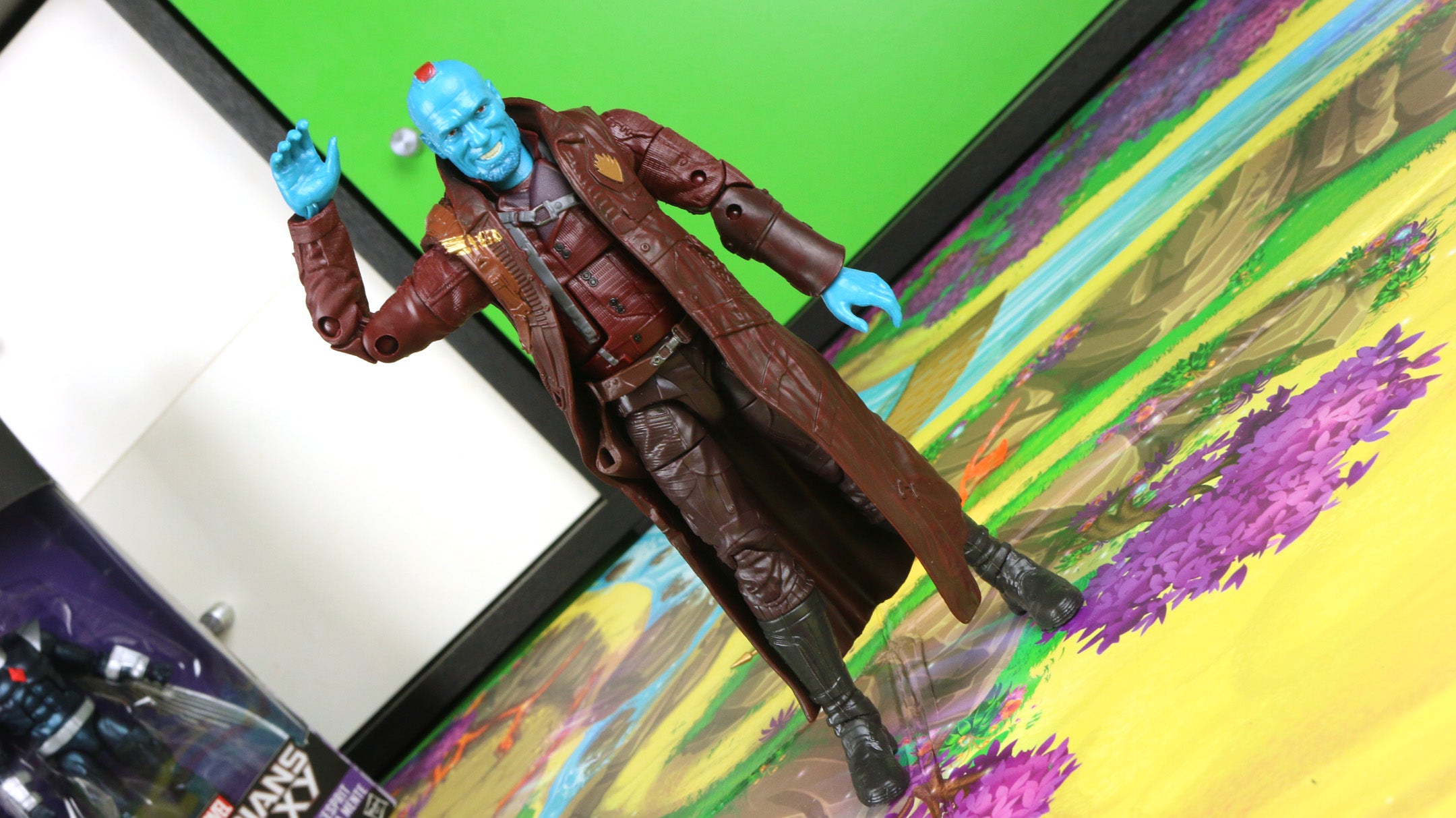 Seriously, this is the happiest blue Michael Rooker I have ever seen. Dude is 61 years old and playing an intergalatic badass. 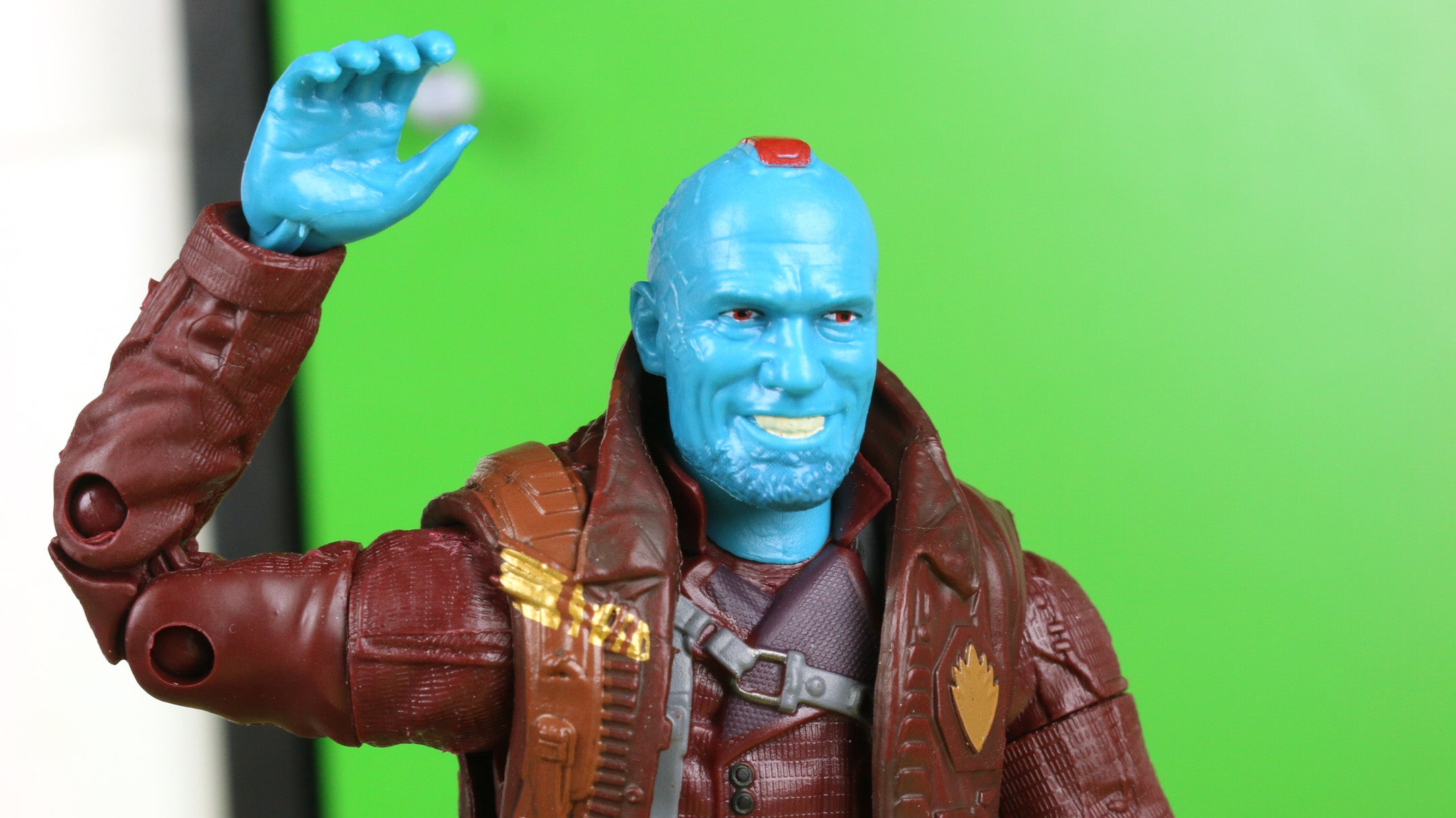 Not only is he on the team, his classic comics fin has grown back as an alternate head. 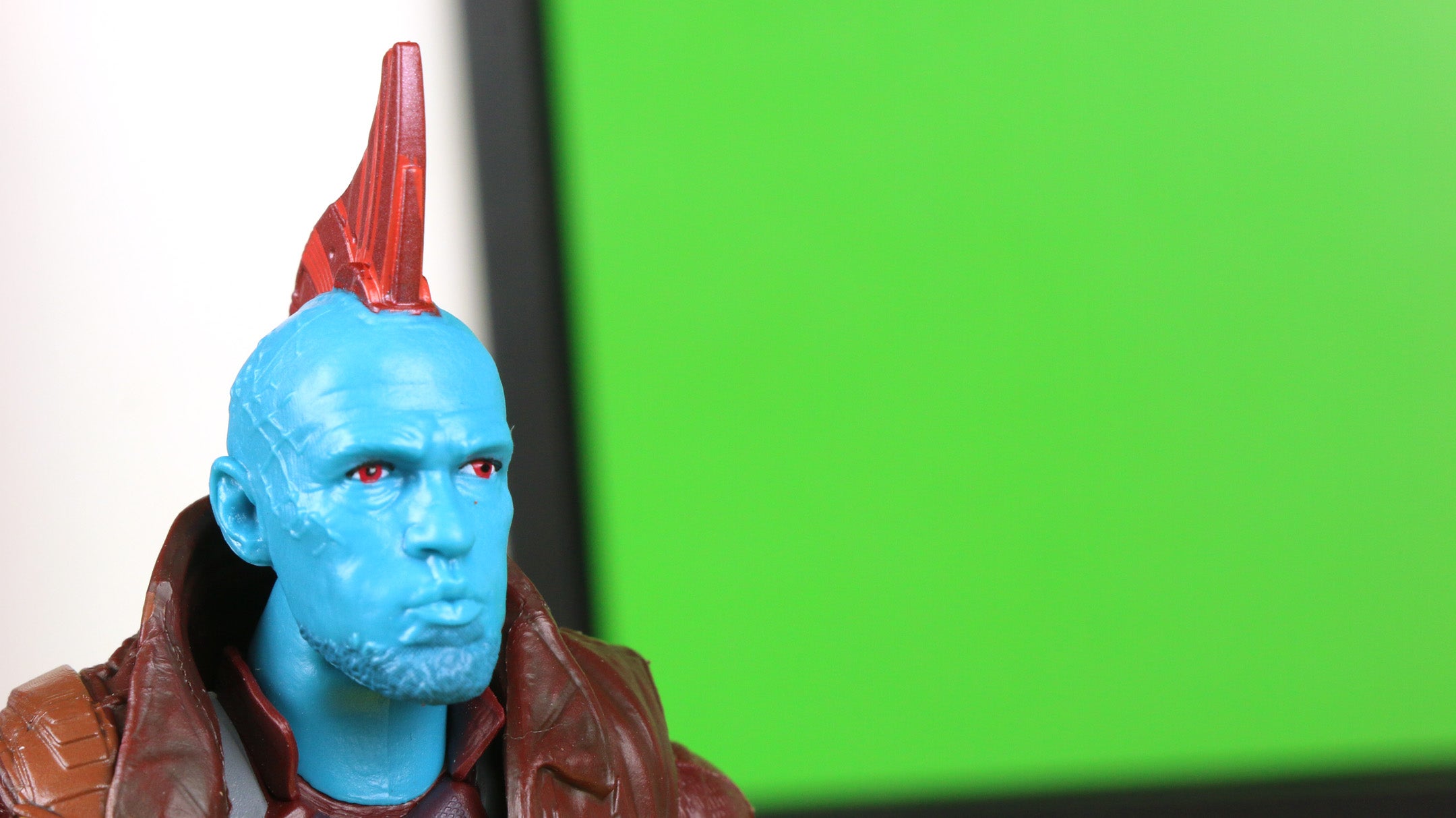 The alt-head blows, but only because this Yondu comes with a very cool special effect piece of his whistle-guided arrow. It’s mildly poseable and plugs into his pocket, so just let whatever reference comes to mind fly. 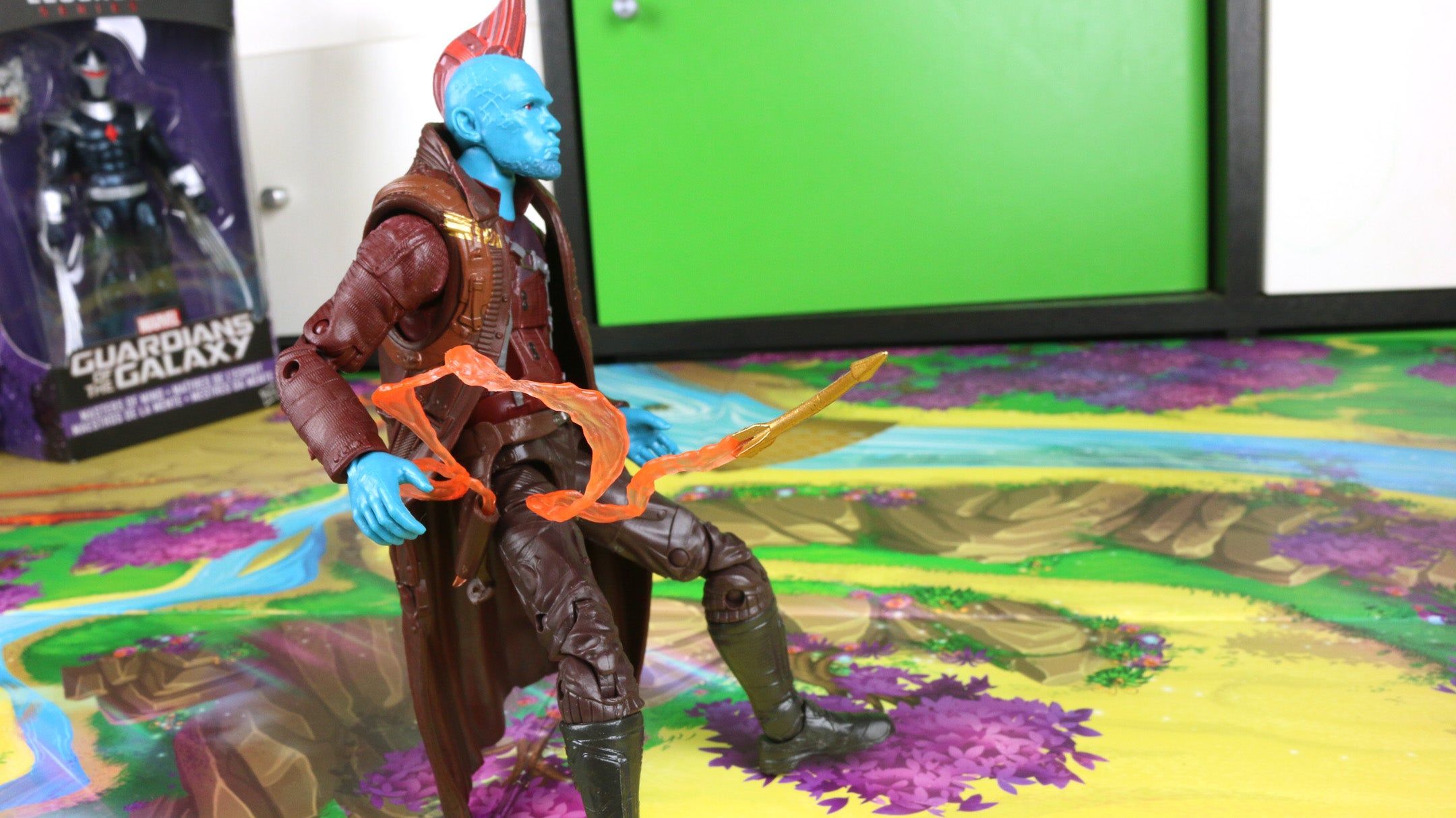 Shifting to the comic characters, who’s this blue-and-white guy with Captain America’s shield? Why it’s Vance Astro, aka Major Victory, another founding member of the original team. 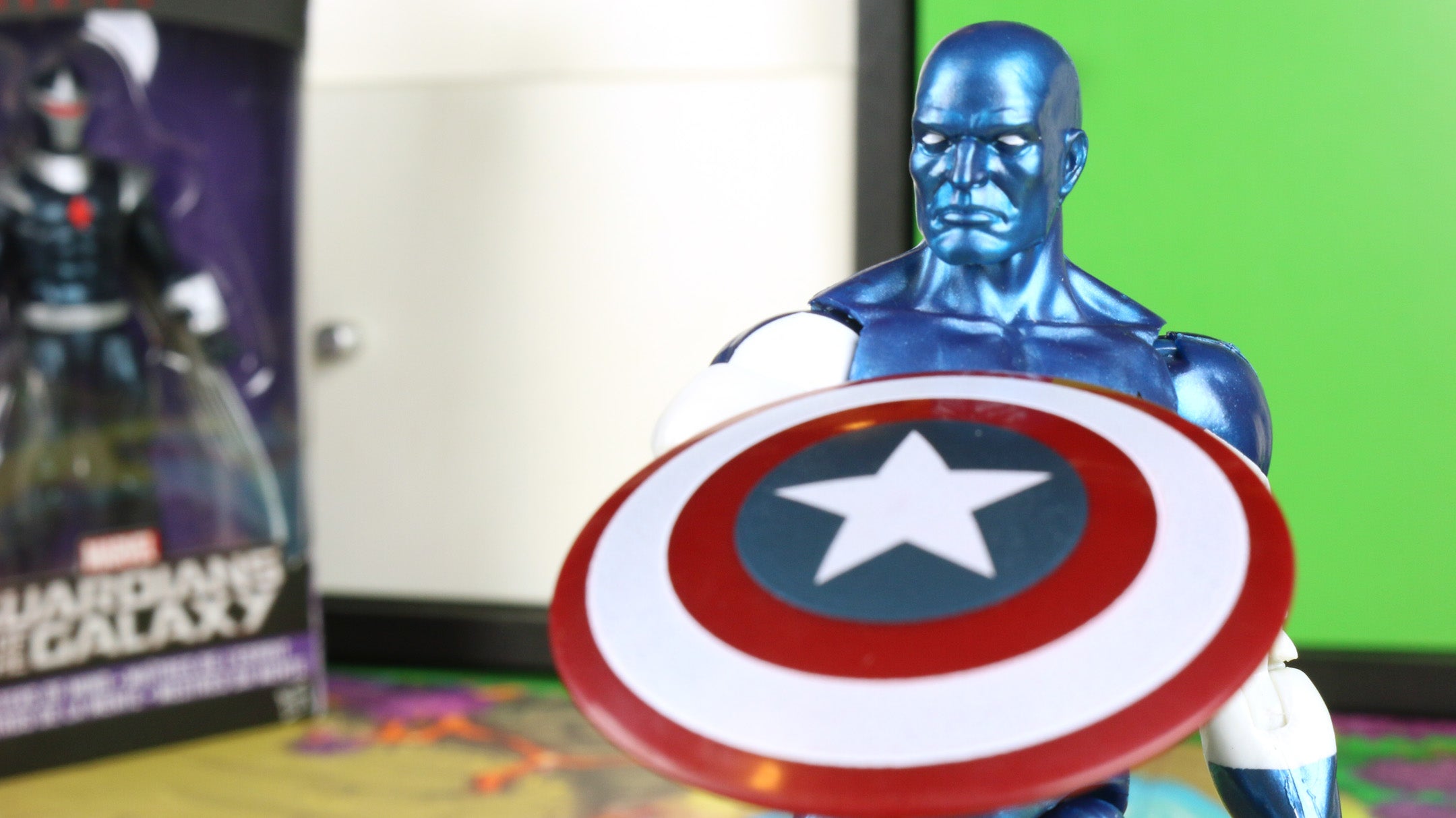 Because every non X-Men or Spider-Man Legends set needs a guy with this shield.

Vance is actually a future mutant with psychokinetic powers, who just happens to be in possesion of Captain America’s indestructible shield. Finding it was a big thing in the comics. Good for him. 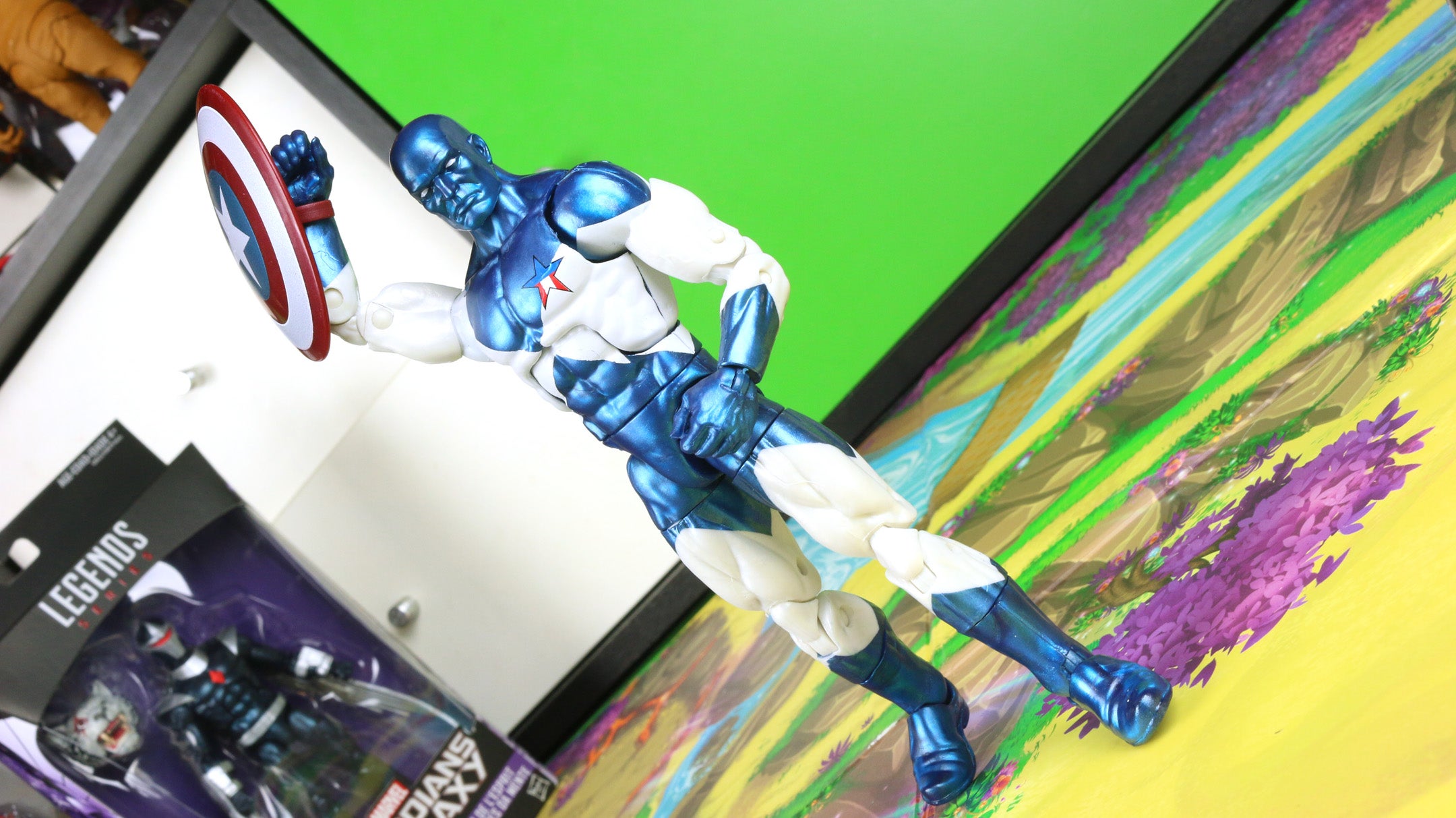 It’s nice to see the old guard getting a little love this time around. 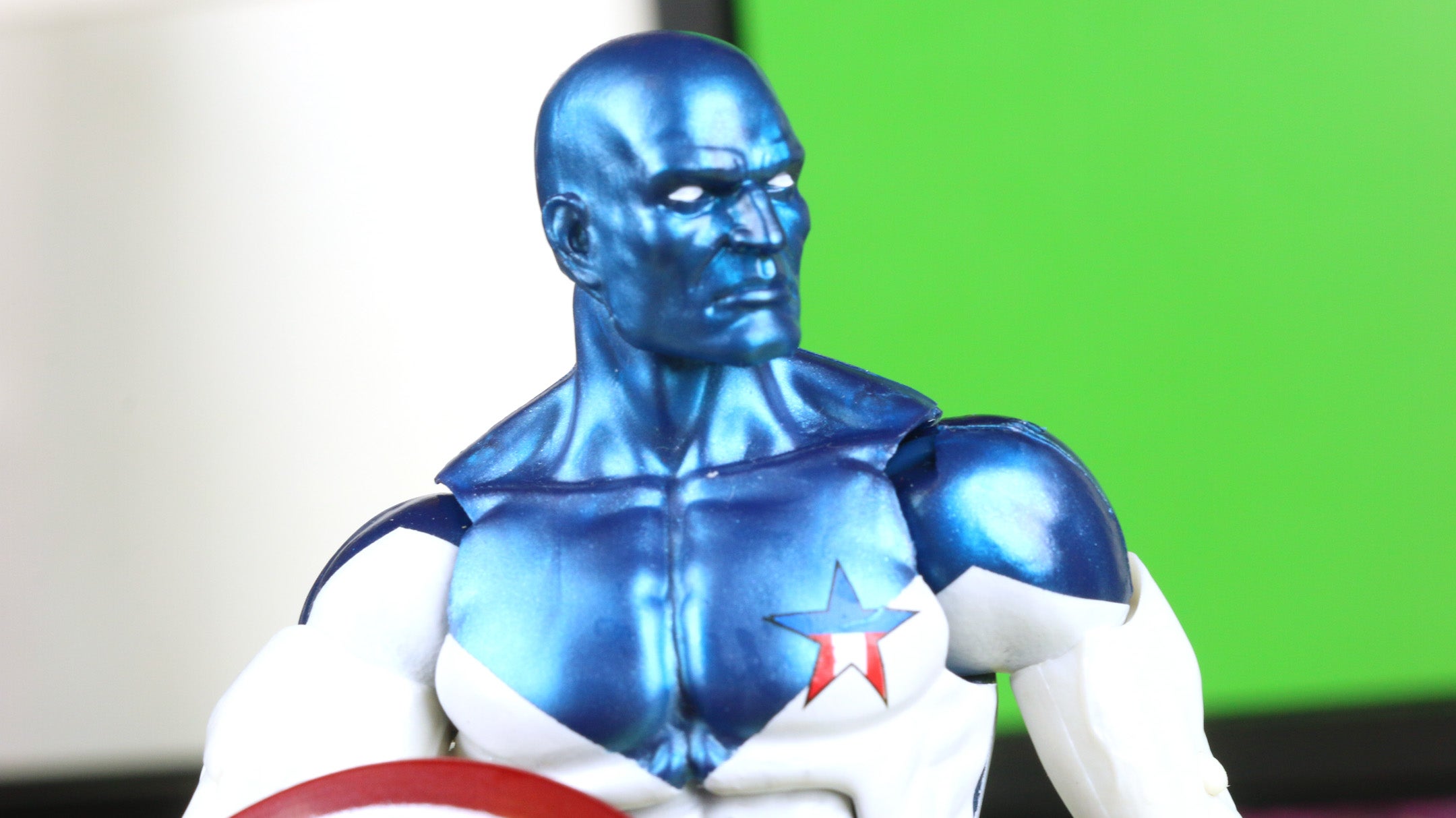 Why are bald blue characters always so dour?

I’ve never been a huge fan of Darkhawk, but some of those comic kids love them some Christopher Powell, so here he is. 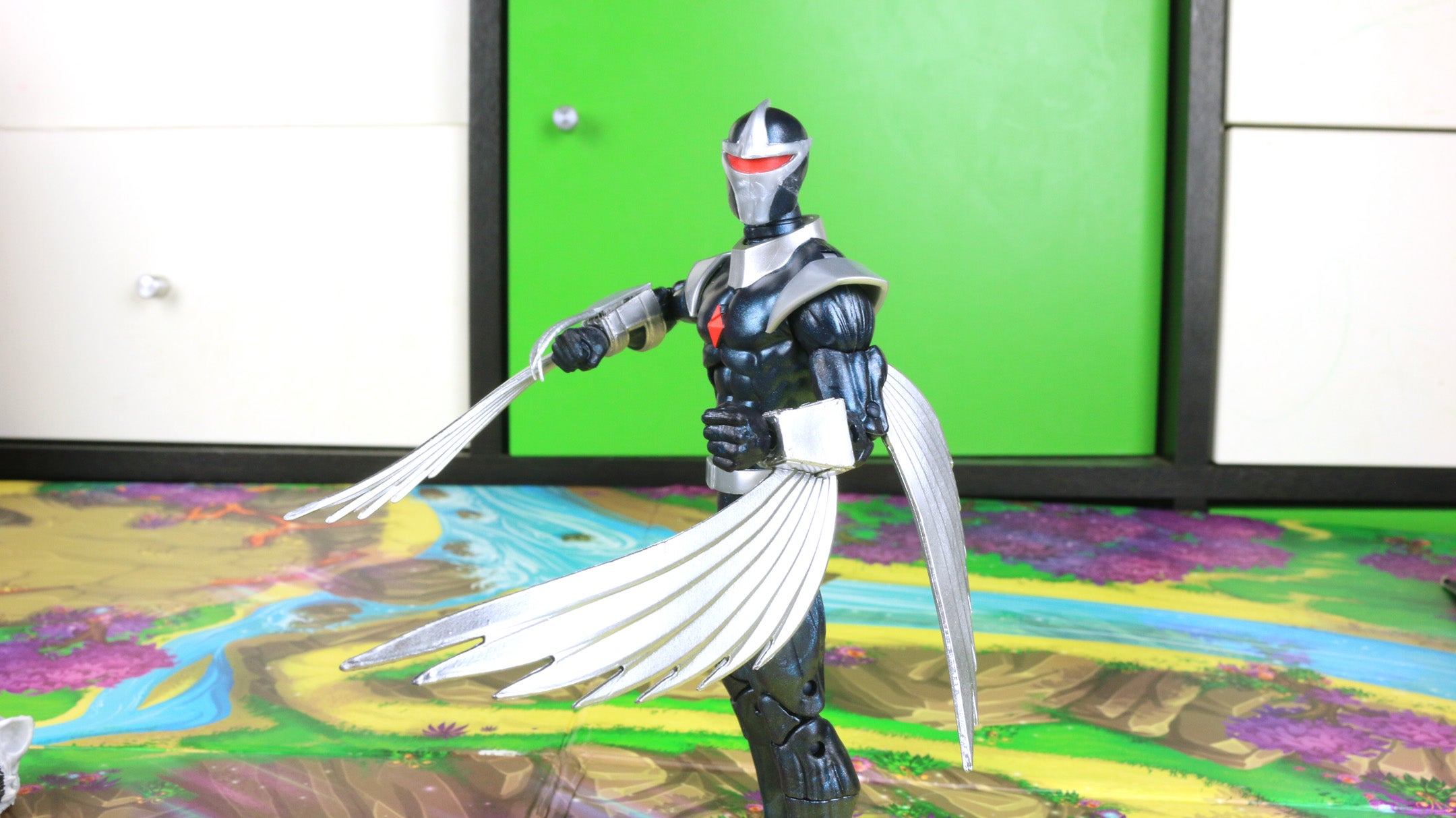 The package says I am with the Guardians of the Galaxy, so I must be? I dunno. I’m Darkhawk.

I guess his wings and those weird spiky things grow on you after a while. And his colour scheme is kind of great. 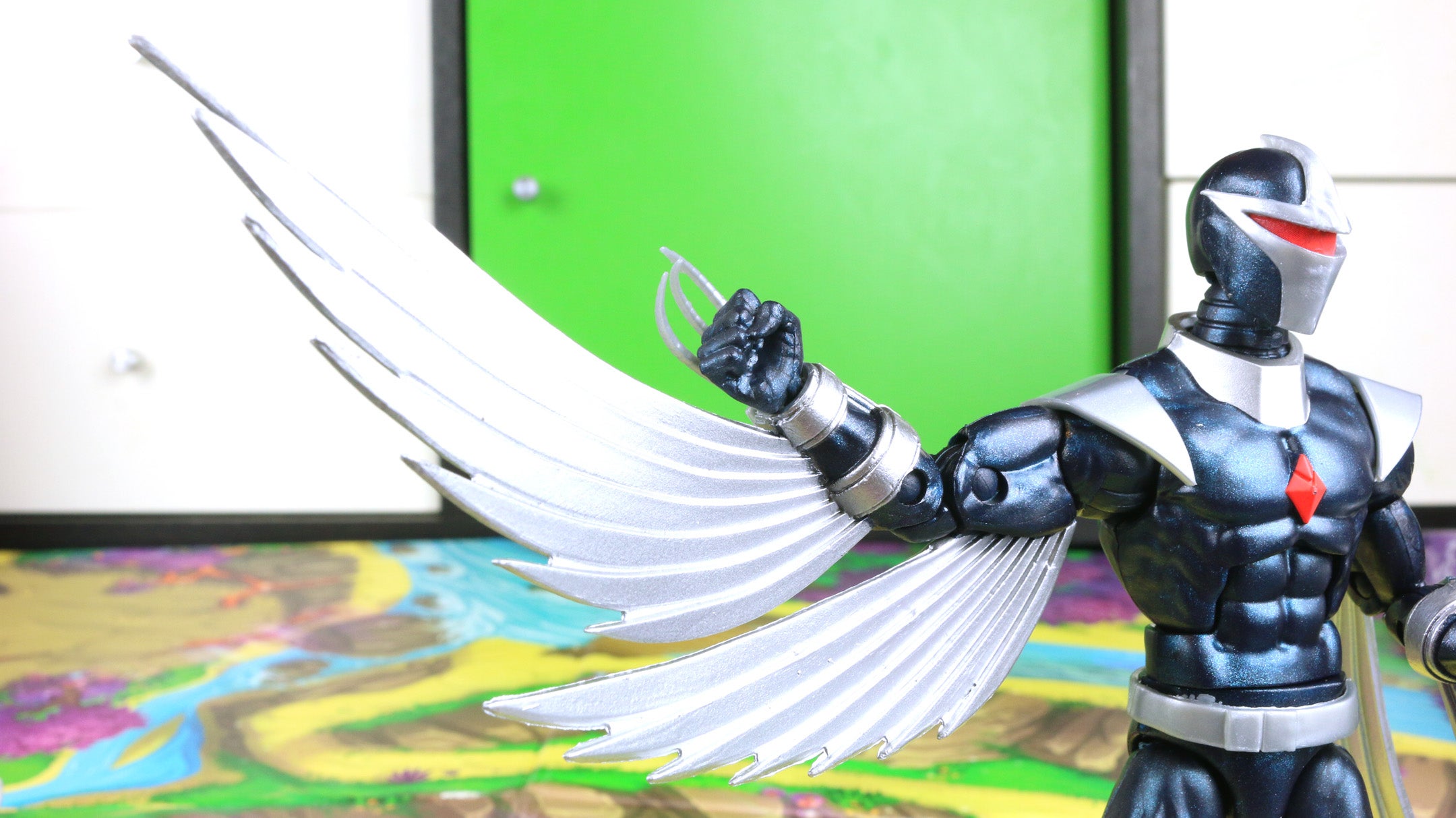 You cannot hurt me, my wings are made of steel! 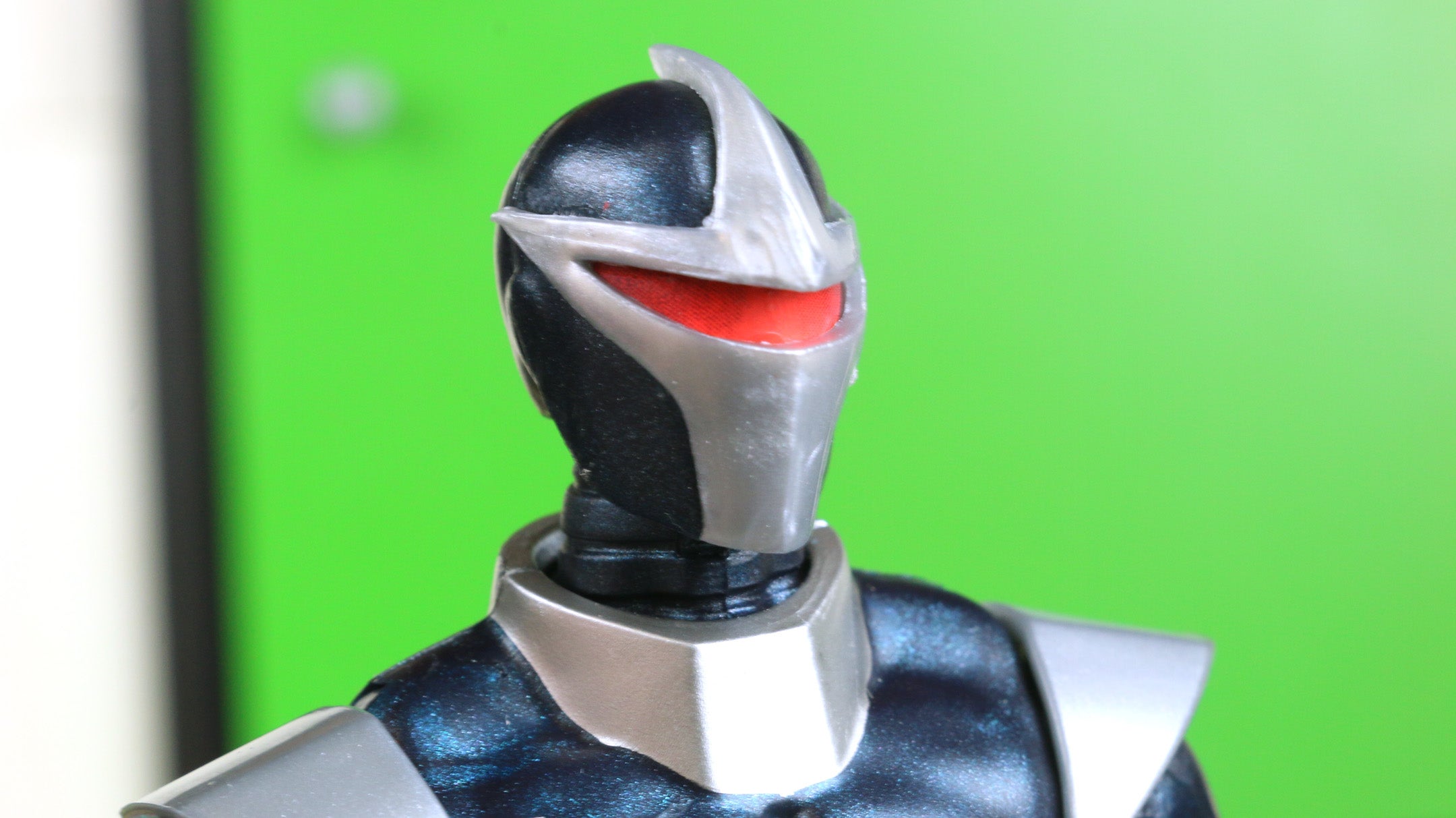 He kinda likes me!

Plus, Darkhawk hangs out with one of my favourite Marvel characters, the young Sam Alexander, AKA Nova. Presented here in sub six-inch form, as he should be scale-wise, this is a pretty great version of my boy. 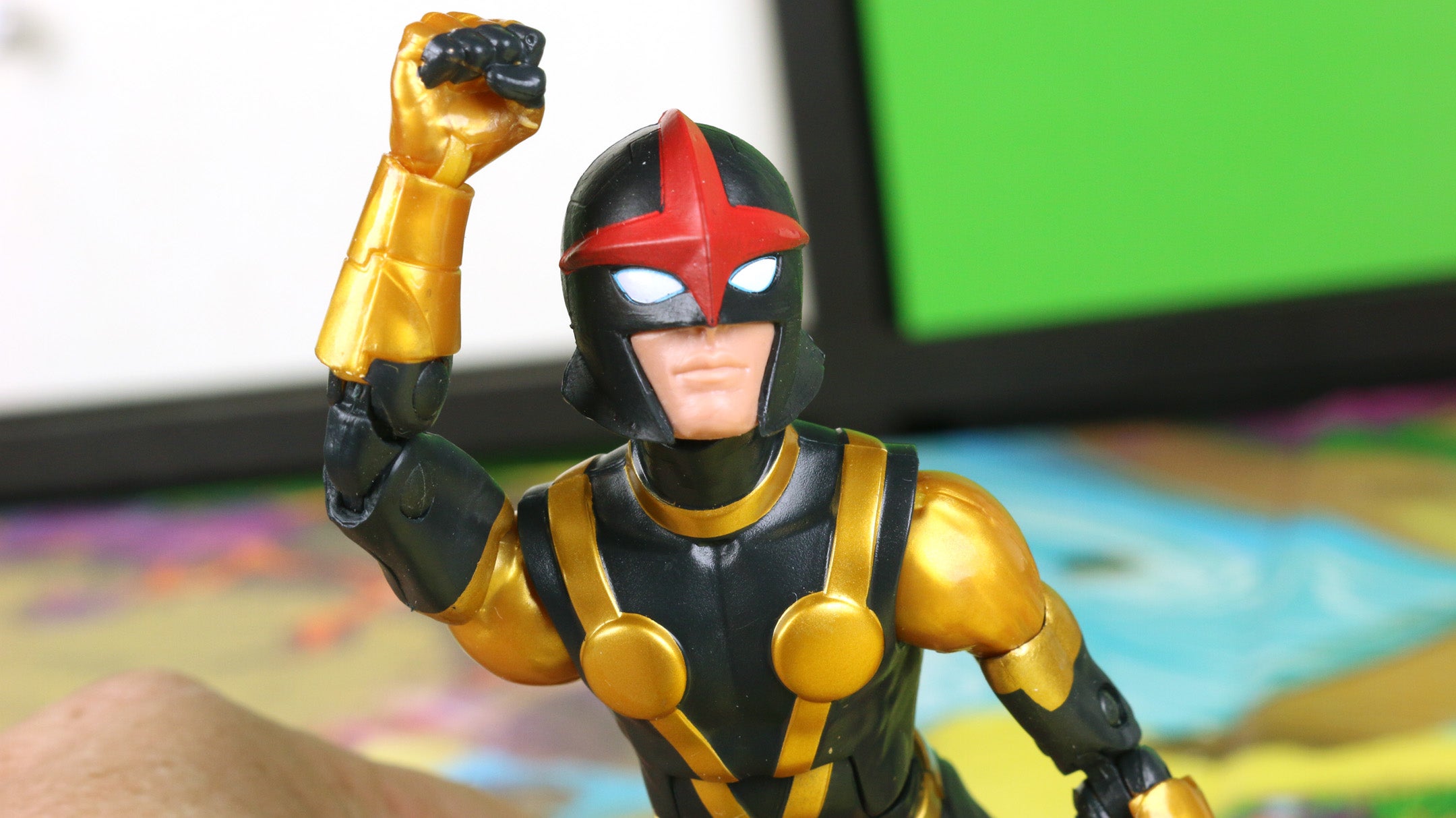 I love the skinny build of this figure. It makes for some great posing. 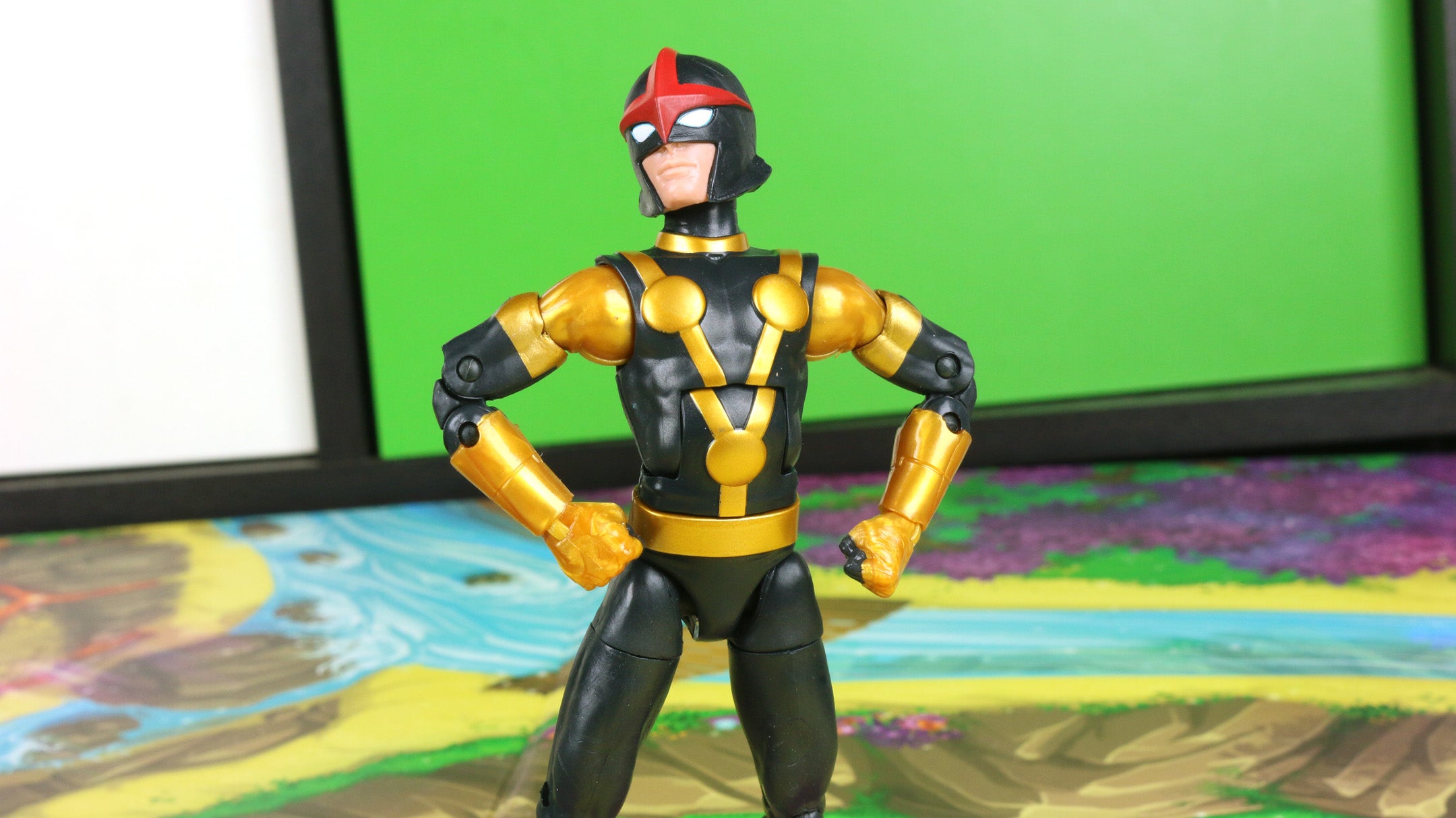 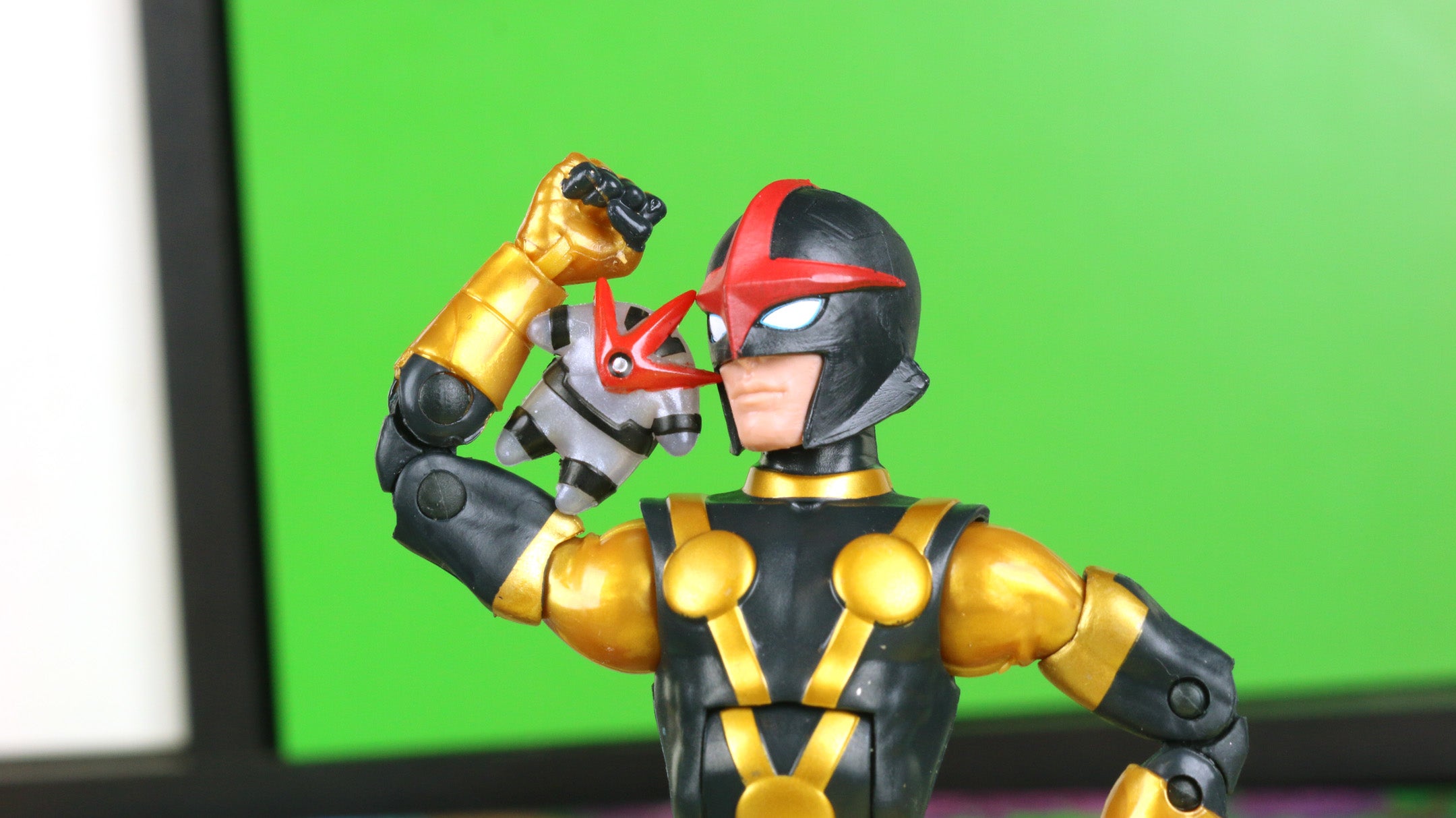 This only took me 10 minutes to pose.

The teen form factor is one of the best additions to the Legends line in recent years. Just look at him. 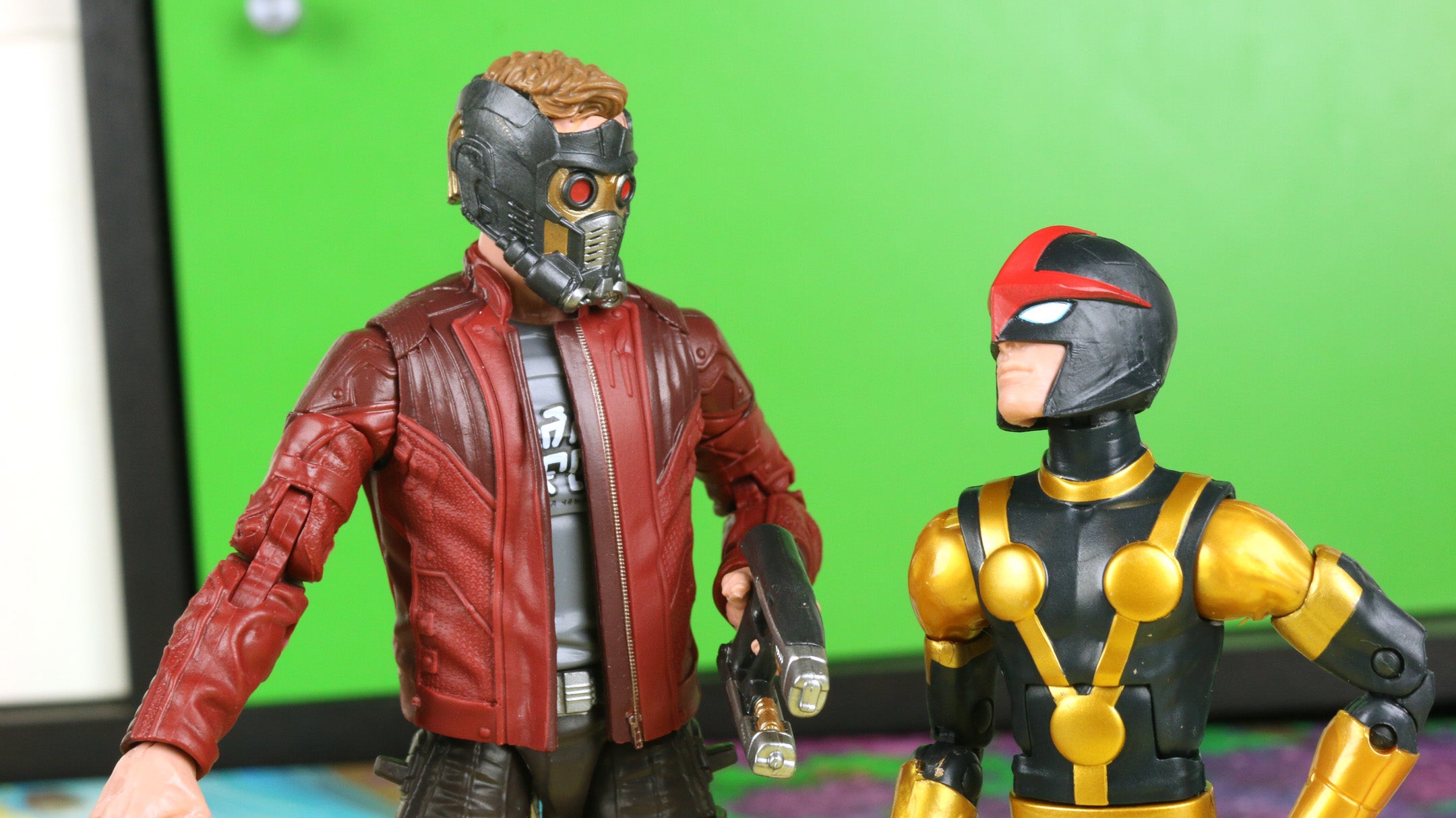 Finally we come to the fan-voted figure of the set, the avenging angel, Angela. 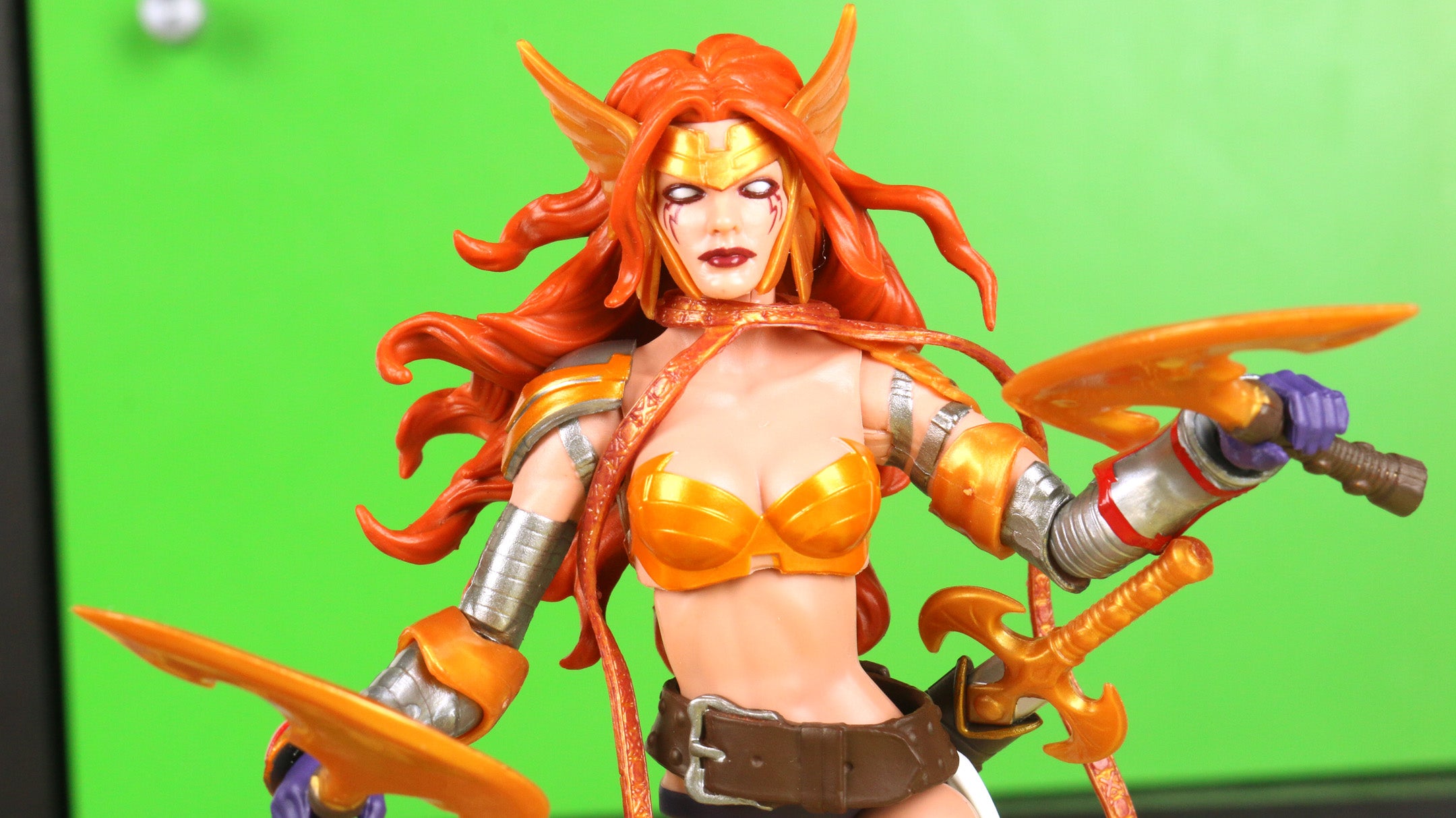 It’s been a long time since I’ve owned an Angela figure. Created by Neil Gaiman and Todd McFarlane as a character in McFarlane’s Spawn comic, Angela was later the subject of a legal battle between the two creators. Gaiman got the rights and later sold them to Marvel. 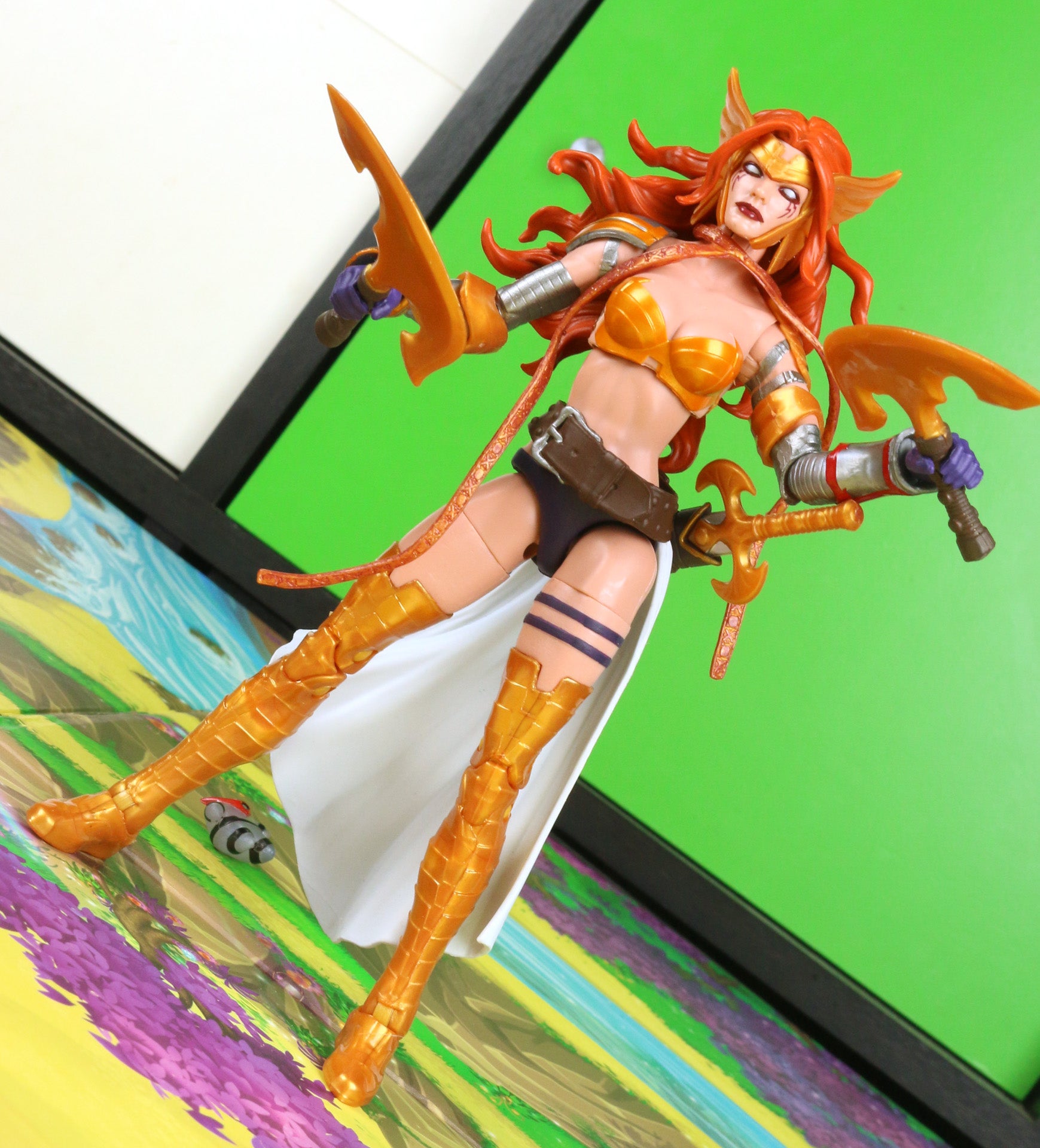 She is such a badass.

Marvel turned her into the long-lost half-sister of Thor. For a while there, it seemed like she might be the new female Thor, until it was revealed to be Jane Foster. Tricksy Marvel. 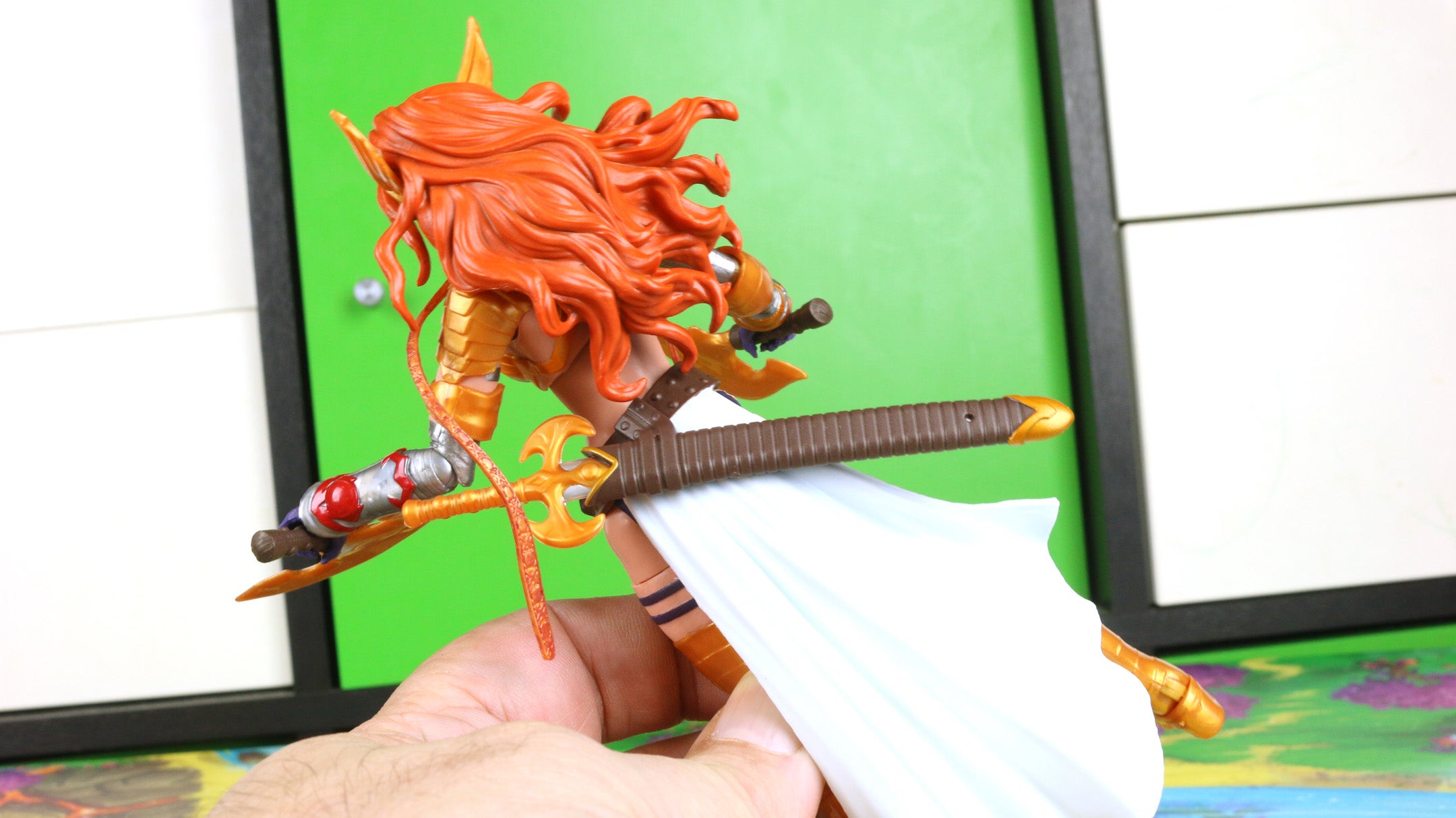 What do you call this piece of clothing? It’s not a skirt, not quite a cape. A train, like a wedding dress would have? I have no idea.

I love this figure so much. The weapons are great. The hair is freaking fantastic. She almost makes up for the reused Drax. 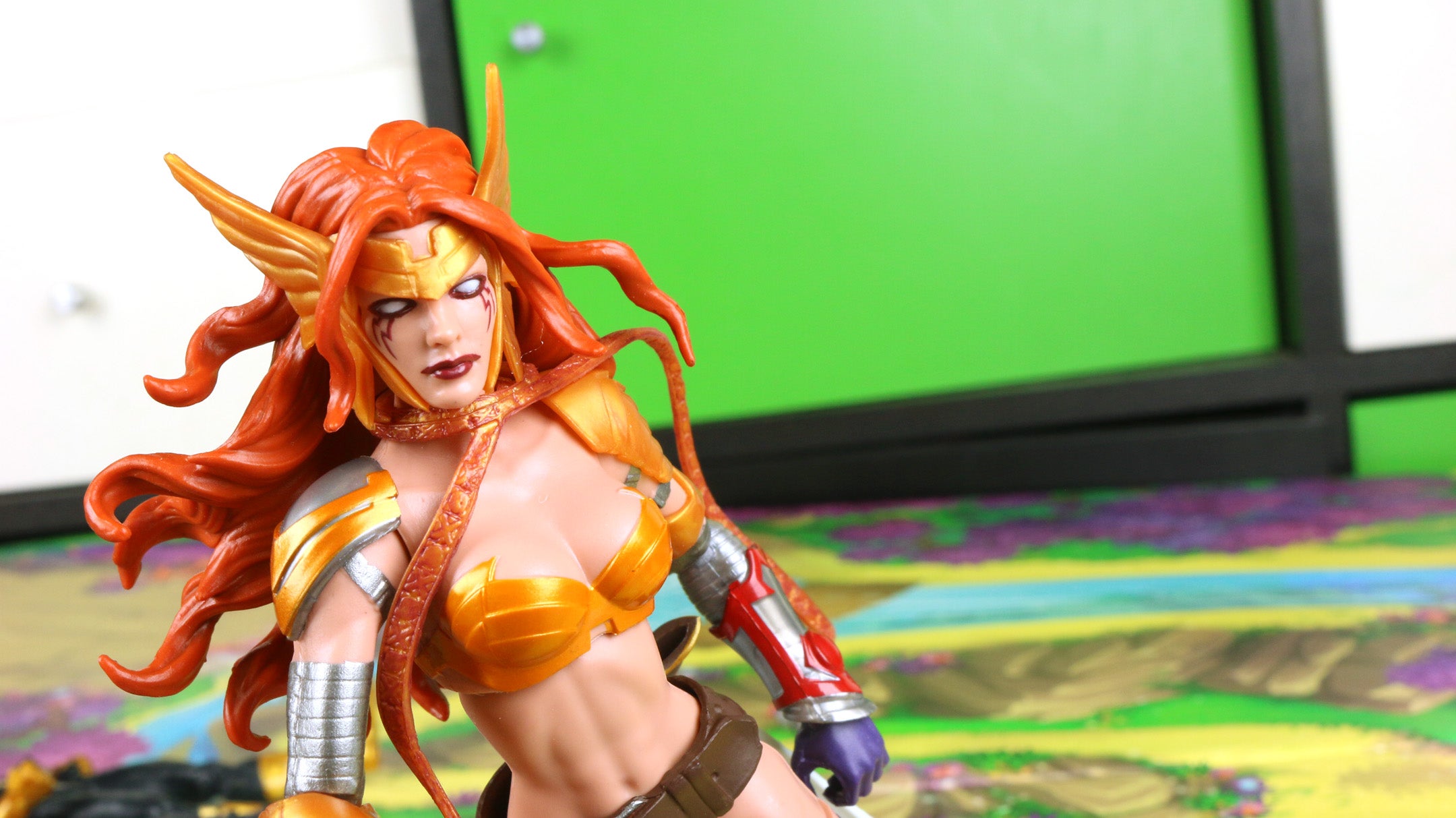 Six of the seven figures in this line come with parts to form one of my favourite build-a-figures in recent memory, former Supernova (the elite of the Nova Corps) Titus. He’s an anthropomorphic tiger. 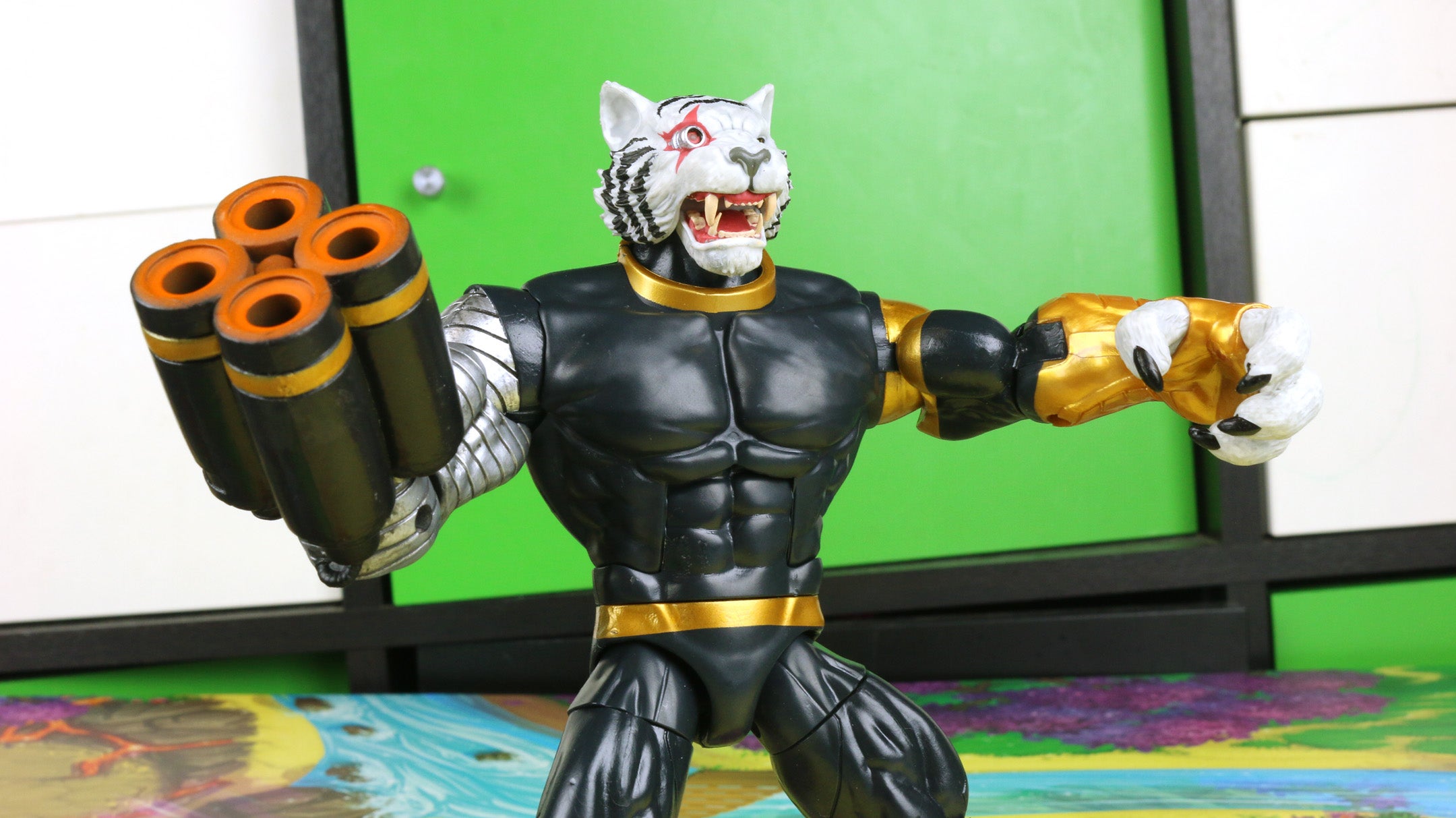 While others might not be as enthused by the obscure character, I followed Titus’ arc in the Nova comic, and I’m happy to see his giant fuzzy arse. 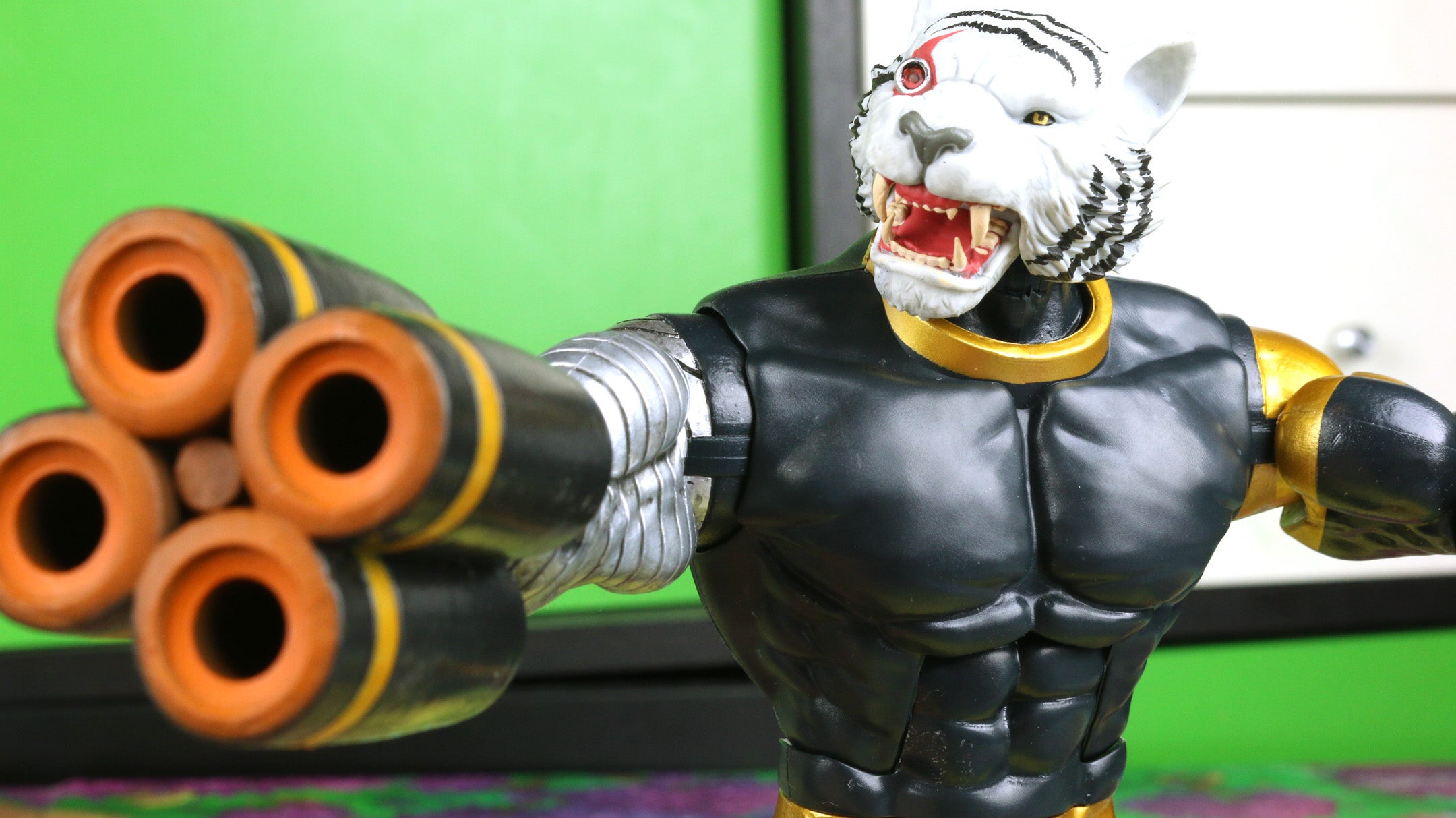 The key to making Marvel cosmic characters in the 2010s is to design them as if you’re in the early ’90s.

Titus is a dick of a cat who comes to Earth and threatens Sam Alexander, hunting for his missing father Jesse Alexander’s Black Nova helmet. He ran into a little trouble involving Nova and the Ultimate Nullifier, but he got better. 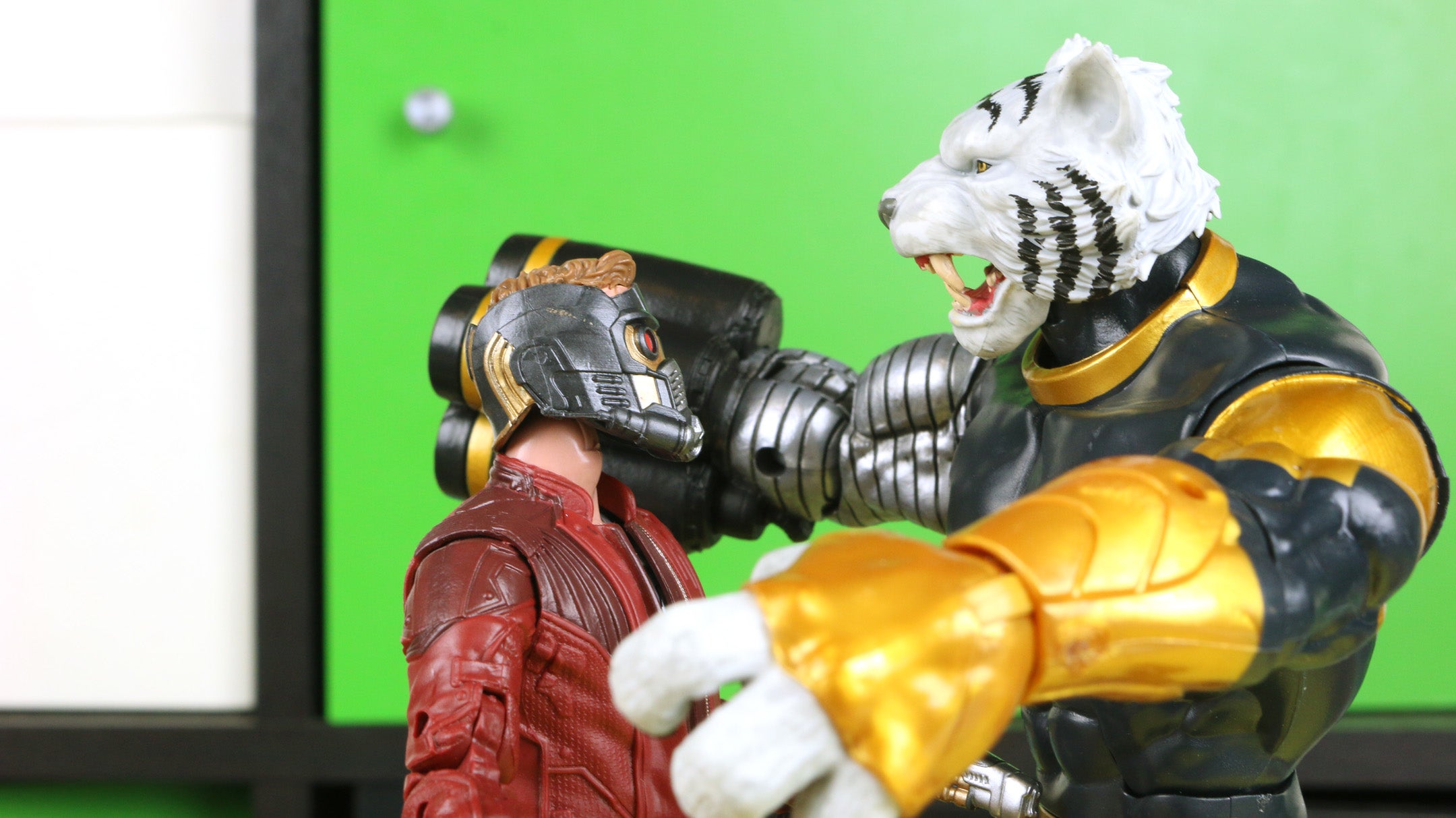 The new Guardians of the Galaxy Marvel Legends line should be slowly trickling onto store shelves. Together they make one hell of a team.

I’ll be at the New York Toy Fair this weekend, getting a peek at the next waves of Marvel Legends figures coming from Hasbro. There’s no way they will top Angela, but they will certainly try.