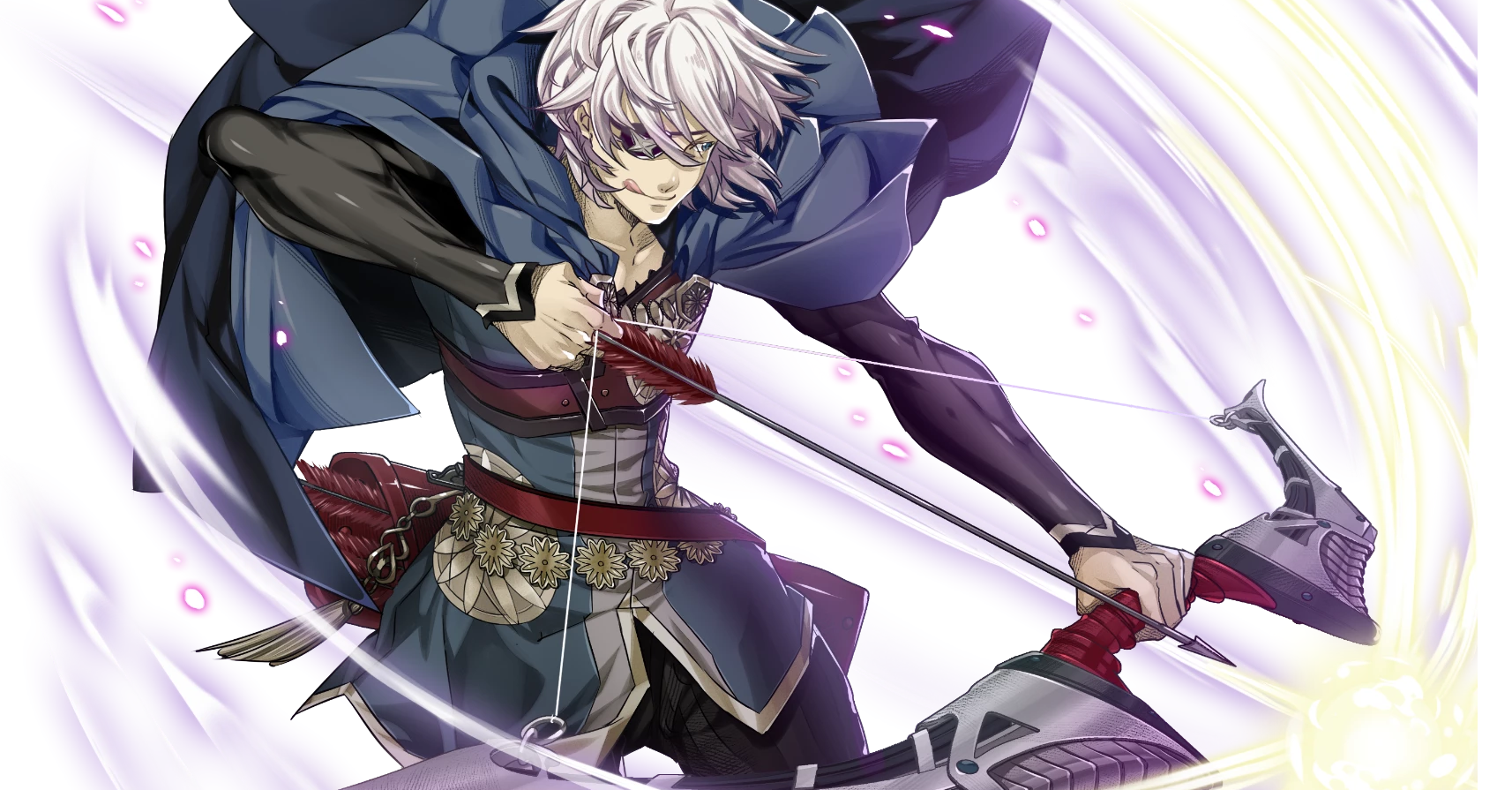 If you haven't started yet, consider rerolling

This is possibly the most annoying tip on this list, yet rerolling may also be the most important. When you start a new game, Heroes showers you with Orbs, which you can use to summon random characters.

If you don't get anything good on your first go-around (and if you have the time and patience for it) try deleting and reinstalling the game. You'll have to go through the tutorial again, which might take a couple of minutes, but in doing so, you'll have another shot at pulling better heroes. Try getting at least one five-star character from the get-go, they're the rarest and strongest of them all.

Hey, it's 10 free Orbs. Once you link your account, you can collect your Orbs by tapping 'Home,' going to the fountain on the bottom right, and then tapping on the blue and silver icon on the top right — it should be glowing.

You'll get daily rewards for doing so, and there are special prizes for logging in on weekends, too.

If you have them, you should go into the battlefield with only four and five star units, even if they're not your favourite. High rank means the potential for growth is wider, which in turn means performing better in duels. Your waifu will understand.

Two heroes with the same stars, or even the same exact title, will have completely different stats. You should use whatever has the better numbers. You can check both stars and stats by tapping 'Allies' and then 'Edit Teams,' where you can sort characters by rarity. Select individual fighters to peruse stats. 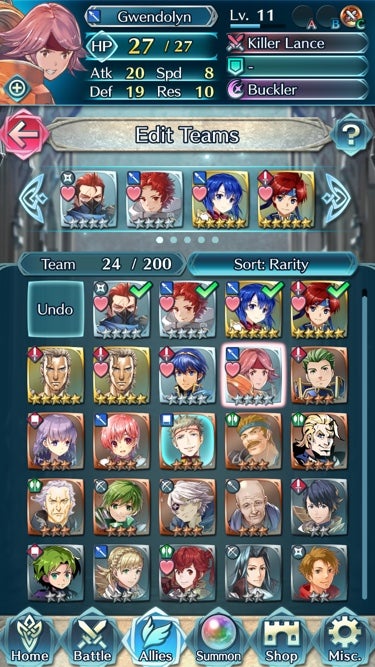 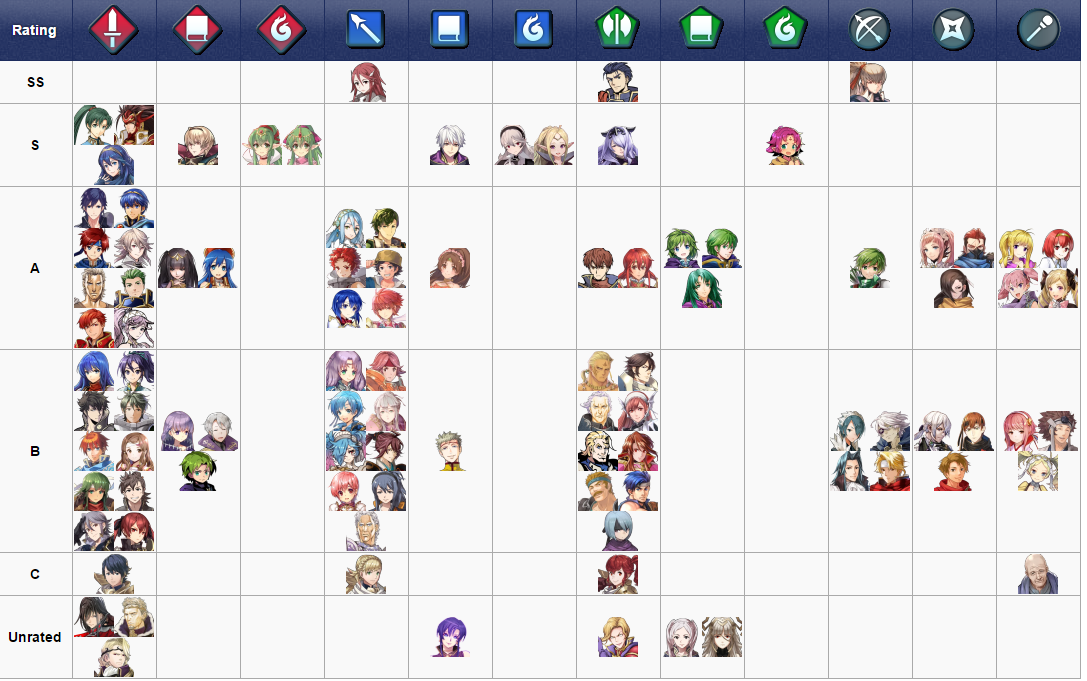 I've seen variations on these rankings elsewhere, but something everyone seems to agree on is that Takumi, Ryoma and Lynn absolutely wreck.

Compose a team with a good mix of strengths

You can only bring four people into battles with you, so pick wisely. My rule of thumb: one heavy hitter, one long range user (magic, shurikens, what have you), one defensive or healing unit, and one all-rounder. Within that, I make sure that everyone has a good spread of weapons as well, so I can tackle any potential threat.

Tap and hold on enemies to see their range

It's the first thing I do in battle, so I never lose sight of their ~danger zone~

Foes won't usually come after you until you step into their range. You can use this to your advantage by setting up first and then pushing a strong character into the red zone. The enemy will chase after that unit, thereby (hopefully) stepping right into your trap.

You lose XP gained during missions for each individual character that goes down.

While you may be tempted to pour all your Orbs into hero summoning, the first thing you should be doing with them is upgrading your castle. On the Home menu, select the green castle icon on the top right:

There, you can buy XP upgrades that will greatly enhance your gains during battle. It's worth it.

In the 'home' menu, tap the fountain and look through the list that pops up. You have general quests, tied to story progression, and if you tap on the arrow next to 'Shards and Crystals,' you can see monthly quests. You're probably going to clear the standard quests no sweat, but the monthly quests have special requirements, as you can see below: 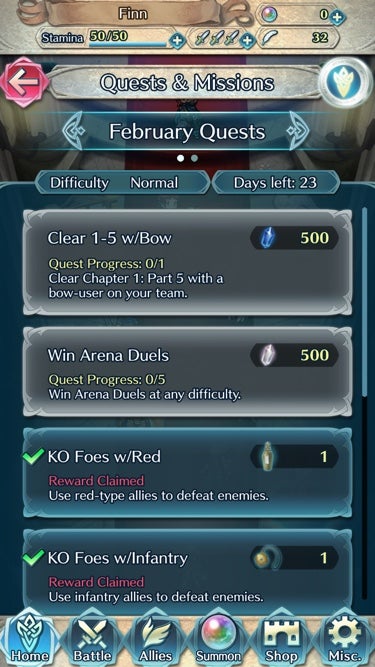 Tapping on the top right blue icon, and then selecting 'Missions' will also give you My Nintendo quests as well, which you can use to get special items such as Light's Blessing.

When you level up, you gain SP. SP can be used to learn new stuff, whether it's giving your Ninja a nifty new poison ability, or teaching your knight how to buff adjacent characters. Just go to the 'Allies' menu and select 'Learn Skills.' Peruse your team's available choices, save up SP, and go to town. Eventually, you'll want to have all A, B, and C skill slots filled. 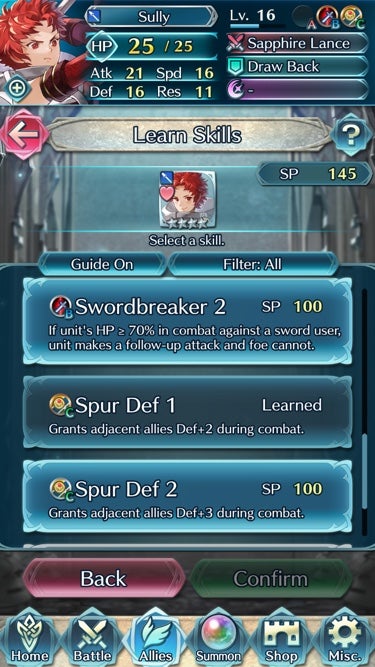 The shards and crystals you gain during normal gameplay can be used as a shortcut to level your characters without actually battling. Use this wisely — that is, on characters you'll actually use. (Found at: Allies > Level Up.)

Getting two of the same character can be a bummer, but remember: you can always fuse them into a single, souped up character. Just click on Allies > Advanced Growth > Merge Allies. Tap on the unit you want, then tap on the Enhance or Lose box, depending on which character you want to buff.

If someone sucks — say, if they have terrible stars — you can just toss 'em through the Allies menu. You'll get some Feathers for your troubles.

As you get new characters, you'll need to get them up to speed quickly. Re-doing old story missions nets you less XP, so your best bet is the Training Tower under the 'Battle' menu. Each Stratum lists enemy levels for that mission, so make sure you're not taking on more than you can chew. For your troubles, you'll earn different seals, as well as put a dent on different mission requirements.

Do the special maps

In the 'Battle' menu, on the top right, you'll find 'Special Maps,' which are unique limited-time quests. Beat them to win new characters.

There's PVP! Sort of. You'll need a Dueling Sword to participate, but once there, you can duke it out against other players around the world. There are different tiers of challenges, and you can select what you feel is appropriate. The more you win, the better the prizes. Your reward will be doled out at the end of the week, depending on what rank you achieved during that span of time. You'll want to aim for Win streaks for better results. Arena duels are the only way to farm Feathers, which you need to upgrade a character's Stars.

Yes, Feathers are a total grind. Make sure to use the bonus heroes listed on the main Arena Duel menu, too.

Eventually, you'll gain a small army of heroes. Depending on what you're doing in Heroes, you might find different teams to be effective for the specific the task at hand. Under Allies > Edit teams, you'll see some arrows next to the icons of your main team. Tap that to go through different teams. The same hero can be a part of multiple teams.

Once a unit reaches level 20, it can ascend to gain more stars. To do that, you'll need lots and lots of feathers. Unlocking Potential can be found under the 'Allies' menu, under 'Advanced Growth.' Note that doing so will reset your character's level back down to 1, but with a higher growth/stat potential.

On normal, Fire Emblem Heroes is a snooze. You can turn things up a notch in story missions by tapping on the blue icon that says 'Normal' on your chapter select screen. Hard and Lunatic are available for you masochists. Better yet, each difficulty awards its own set of Orbs, go it's a good idea to go back and re-beat stuff once you're powerful enough.

Fire Emblem Heroes is best enjoyed in short spurts, so you don't burn out all your stamina. Nearly everything in the game has a stamina requirement, so make sure you pace yourself accordingly.

Check on your friends

On the Home menu, you should see some of your units gathered in your castle. If you see small hearts floating around a character, select that unit. They will give you something nice.

There's no full-on skinship mechanic in Heroes, but Intelligent Systems still included some rubbing action. (Um, yeah.) Under Allies, select and hold your favourite character. They will take up your entire screen like so: 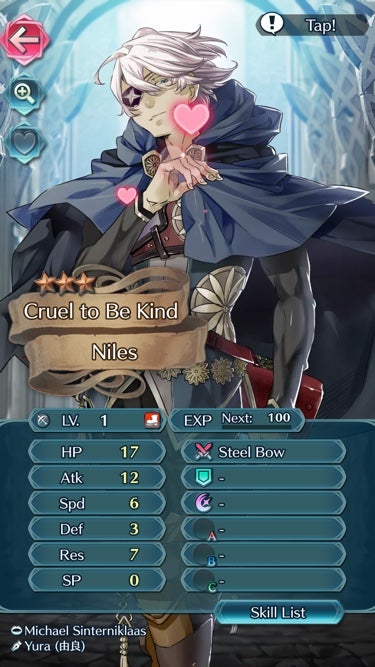 From there, rub away. They will respond to you. Or, you can just tap the speaking bubble icon to hear them say stuff. Whatever floats your boat.

I know you want that Tharja or whatever, but don't do it. It's a trap. The lowest-priced tier won't even be enough to summon characters, which is kinda bullshit.

Summon multiple characters at once

The orb cost is lower this way. ~20 orbs in one go is the recommended amount, so you can summon a full spread.