Every Time Nier Automata Ends, It Gets Better

Nier Automata is a game that gains meaning through repetition. The ending to the game changes following multiple playthroughs. Players see events from new perspectives and learn new information that recontextualizes past actions. It’s given us a lot to think about. Mike and Heather dissect the story in this discussion. Heather Alexandra: So. Nier Automata. Holy crap, this game is something wild. There’s five endings to the main plot plus over twenty other “bad” and “joke” endings. To be honest, I’m not even sure where to start.

Mike Fahey: Perhaps you had better start at the beginning, which is a very different place from any of the main endings.

At the onset of the game we are told that humanity has retreated to the moon following an invasion of alien machines, leaving behind a force of humanoid androids to defeat the invading force and make the world safe for humanity once more. It’s a very noble beginning that gives the player a great sense of purpose.

Heather: The androids also initially have a strong contrast with the machines. They’re emotive, they have crushes on each other, they get flustered. Meanwhile, it seems all the machines can do is fight and kill. The game starts with a very clear delineation between these two groups.

But that changes a lot over the course of the game. We meet Pascal, a kind robot pacifist who leads a small village of nonviolent robots. We confront Adam and Eve, two machine brothers trying to find their purpose. By the end of it, the good guys are fighting each other and bad guys take a softer light. It’s amazing how much things change.

Fahey: I am pretty sure that’s indicative of how Yoko Taro designs a game. He starts with what we think is going on, ends with what’s really going on, and between the two just writes “happiness” in small letters followed by “SADNESS” in big letters over and over again.

Heather: It’s interesting to note that he’s actually talked about this. In a 2014 GDC talk, he explains that he starts at the end and works backwards. Which explains a lot. He probably started with ideas like “a girl kills her friend” or “a duel occurs on the top of a tower.”

Heather: Well, my first “ending” was self destructing in the Bunker on the moon. Which gave a quick text about how pretty the explosion was before running a fast forwarded version of the credits.

Fahey: My first ending involved eating a fish, which resulted in a bit of text about how androids shouldn’t eat followed by a fast forwarded version of the credits.

Heather: You ate the mackerel!

Fahey: The game suggested I eat the mackerel! I was just following its suggestion! At least I saved first. That time.

Heather: I don’t blame you. It’s a very tasty mackerel.

Fahey: I eat things for a living. I was powerless.

Heather: In one of my endings, I left the mission area for a little stroll.

The fact that the game rewards you for going off the rails by giving you these smaller endings is very nice. You can end the game by running away from a boss or killing critical characters. 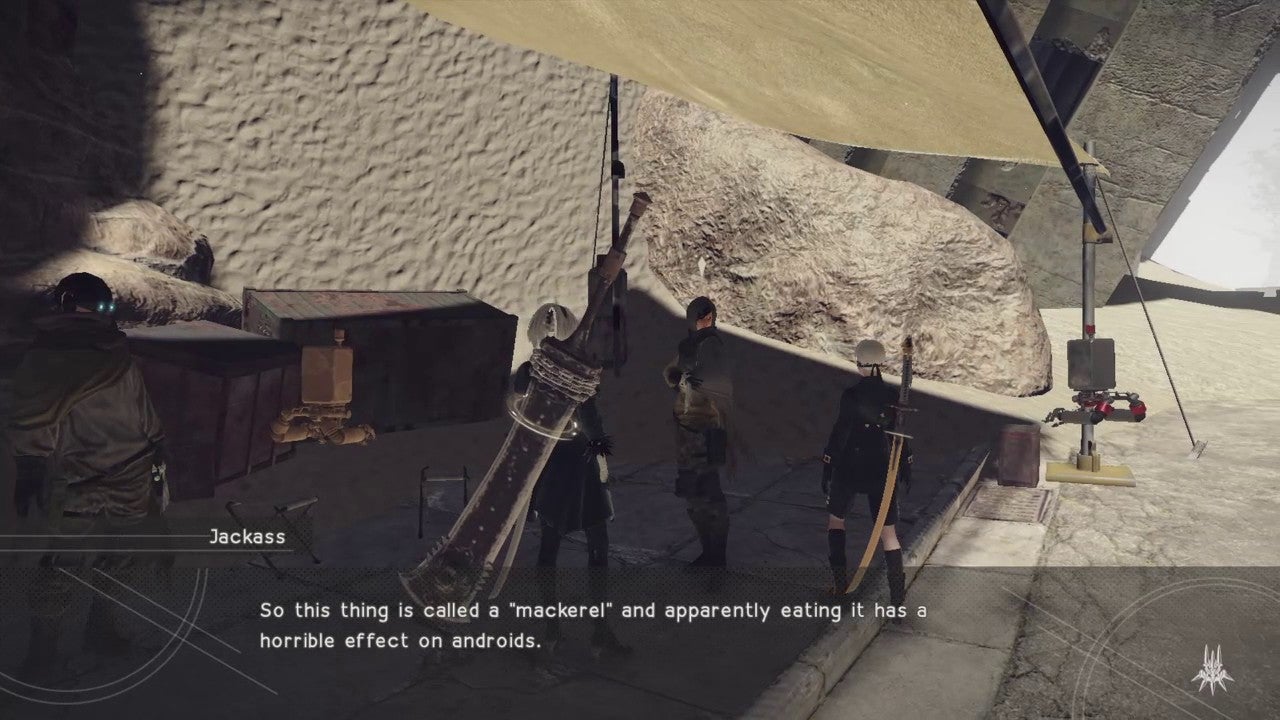 Go ahead. Eat the fish.

Fahey: Sometimes you can see them coming. I joked that if the game asks you to do something stupid, save first. But then there was one ending where I felt the game cheated. Later in the game, after the first two main endings . . . let me see if you hit this one too.

Heather: I can’t imagine. My guess was going to be not hacking the Tower door and instead choosing to keep fighting alongside Devola and Popola. But that’s a 9S ending.

Fahey: During your early time as A2 you head to the resistance camp and encounter everyone’s favourite pacifist robot, Pascal. A2 at this point is the world’s biggest “kill all machines” pundit, and we’re given the choice to help or kill Pascal.

Killing Pascal felt like what A2 would do. But no, game over.

Heather: Wait. You not only ate the mackerel but you also killed the game’s most loveable character?

Fahey: I was role-playing! But now that I look back at it, maybe that quick ending was a lot more than a simple aside. Because it’s not just A2.

Heather: Similar stuff happens with other characters. I’ll admit that I attacked the zealot robots at the foundry during my first playthrough. Bam! Bad ending J.

It felt like a trap. It was a trap! I thought I was being genre savvy.

Fahey: In this case, I think the bad ending with A2 killing Pascal was a bit of Yoko Taro brilliance, a way of indicating early on that more than a bit of 2B was still present.

Even these stupid little game overs carry some sort of meaning.

Heather: Which I suppose leaves us with the main endings. At first, the game can seem a bit underwhelming. Ending A is very straightforward. You defeat Eve. 2B is forced to kill 9S but he comes back in a machine body. It feels like a decent ending about the blurred lines between the machines and androids.

Fahey: The machines are key to 9S’ salvation. Ultimately we discover that they’re the key to the entire android race’s existence. How about starting the game over and realising you were about to go through the whole thing all over again from 9S’ perspective? I’ve never been so pleased to start a game over.

Heather: Even better, it starts with the perspective of a random machine trying to save his fallen brother. Then switches again to 9S. It’s very smart stuff. Cutting back to 9S back when those lines between the two forces were black and white.

Fahey: Oh my goodness, I’d completely forgotten about that little robot with the pail. “Brother. Brother.”

Heather: Spilling the oil, struggling to walk even just a few feet.

Fahey: My brother is coming to my apartment this afternoon to help me move a couch. I shall have a bucket of oil prepared.

Fahey: But yes, back to 9S, which was almost a disappointment for this hacking-happy gamer, but that’s a tale for another time. That third play through got really, really dark.

Heather: The second playthrough is mostly repeating the process of the first with a different character. The third and those that follow add a lot more. The Logic Virus, A2, the truth about what happened to humanity. It’s… a lot.

Fahey: I bet the people who play through to the first ending and stop are really confused about A2, who only appears for one fight in the first two playthroughs.

Heather: Gosh, untangling everything is complicated even the third time around. Long story short: humanity is dead, the aliens are dead, and everyone is fighting simply because that’s all they really know. 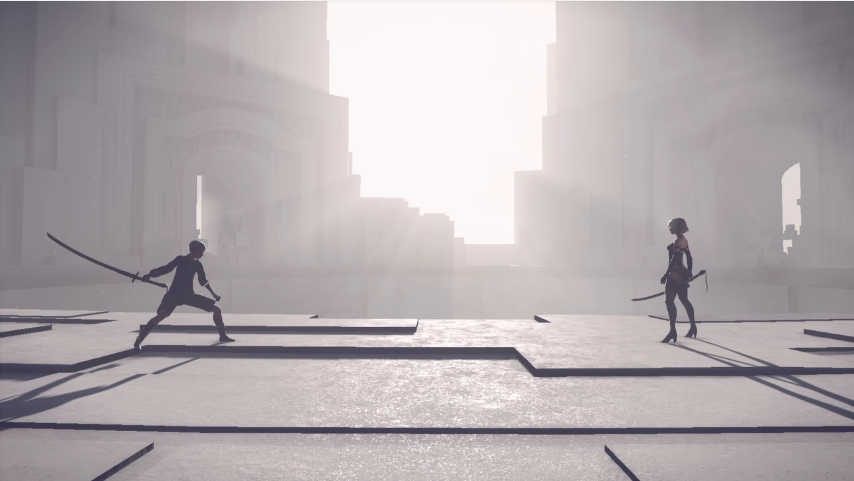 Fahey: I do not like what happens to 9S at all, even though I knew it was going to happen. Yoko Taro never leaves an innocent, happy-go-lucky character go unscathed. By the time he ascends the tower and participates in one of the coolest shared boss fights I’ve ever seen, he’s pretty fucking scathed.

Heather: His world is shattered. His purpose for being is a lie and all he knows is that that A2 killed 2B. He’s near rabid with a desire for revenge against her and his supposed masters. Poor, poor boy.

Fahey: Meanwhile A2, the ruthless machine killing . . . machine . . . has gone in the other direction. Two characters violently transformed, and then they player gets to choose.

Heather: It’s bold. Where did you stand at that point?

Fahey: It was a very tough decision to make. Ultimately it came down to 9S’ hacking versus A2’s berserking. Hacking won.

Heather: 9S was my choice as well. If only because I was equally frustrated with the state of things. And yeah, hacking is pretty great.

Fahey: That I could love both of these characters so completely, especially considering one of them only really joined the game in its final moments, that game mechanics decided for me is a testament to Taro’s storytelling prowess.

Thank goodness 9S’ ending unlocks chapter select, so I could redo my choice immediately after.

Heather: It’s different once you understand what the Tower is. He thinks it’s weapon. Something to destroy the last vestiges of humanity. But it’s been changed into something of an Ark. That text sequence is powerful stuff and reminds me so much of first game’s Forest of Myth.

I love how this game will switch format for powerful moments.

Fahey: I was waiting for the text sequence. I knew it had to show up somewhere.

Heather: Oh, of course! Speaking of format switching, that brings us to the game’s final ending.

Heather: Which is also a pretty nice revision of the first game’s ending where players could save Kainé if they gave up their save data. But here, it is a lot more abstract.

Fahey: First off, turning the final credits into a shooting sequence was insanely brilliant. As I was killed over and over again by Square Enix’s legal department…

Heather: You might as well make the toughest ‘fight’ against the people who literally created the game. They’re gods, in a way.

Holy crap, these credits are tough!

Fahey: So we battle the gods, thanks to a pair of “mindless” machines discovering their humanity.

Heather: When things seem too tough, we’re saved. Then we decide if we want to save someone else.

Fahey: Remember the very beginning of the game? What’s the 2B quote . . . “I often think about the god who blessed us with this cryptic puzzle, and wonder if we’ll ever have the chance to kill him.”

Heather: It shifts from what we might expect. It’s not machines killing humanity or 9S destroying the bunker. It’s us shooting Yoko Taro’s name in the credits.

Fahey: He deserves it.

But yes, we get to choose to save another person . . . to exercise our own humanity, and we lose ourselves forever.

Heather: Give up our save data. The thing that proves we existed in this space. All those hours, all those side quests? Gone.

Fahey: We should have just played Zelda.

Heather: If giving up my save data helps someone get through those credits, I think it was worth it. Even if we’ll never know who that person is.

Fahey: I’m playing through again on PC. This time, screw other people.

Heather: You’ll eat that mackerel again and have a 100% save file, damn it!

Robot theatre, tragic duels, and a lot of philosophy turn Nier Automata into a powerful game. After all the blood is spilt and the dust settles, things are surprisingly uplifting.

We’re left with an understanding that the future is something that we shape. It isn’t given to us. We make it. The journey is rough but the destination is worth it. It’s a great game that’s left us with a lot to think about.

What were your thoughts about the endings? Feel free to let us know in the comments below!