John Gonzalez might have cut his teeth on the beloved Fallout: New Vegas, but the game writer told Kotaku that helping craft the story for Horizon: Zero Dawn was “hands down the biggest challenge” of his career. Here’s why.

According to game director Mathijs de Jonge, the idea for Horizon began as a pitch from Guerrilla Games’ studio art Director, Jan-Bart. The developers knew that they wanted a “female protagonist fighting machines on a lush Earth far in the future,” de Jonge said, but working out the details turned out to be surprisingly difficult.

“[Writing] Fallout: New Vegas was no walk in the park, but the themes and tone of the universe had already been well-established in previous instalments, and the world could be explained in a single sentence: The Bomb dropped, this is what’s left,” Gonzalez said. “Plus it didn’t hurt that I was working with Chris Avellone and Josh Sawyer, stellar talents whose knowledge of the Fallout universe was unmatched.”

Horizon was in some ways trickier, he explained, because the story seems paradoxical.

“The very elements that made its high-level concept enthralling (low-tech humans vs. high-tech robot dinosaurs!) contradicted each other in a way that demanded explanation: Why would humans forget technology if technology was all around them?” Gonzalez said.

“All told, that meant we needed to a) imagine an entire history for this strange new world, b) create a character who’d be compelling to play, c) give her a deeply personal reason to go questing across the world, d) make sure her personal quest put her on a collision course with the biggest mysteries of the world, and e) pace out the (quite intricate) answers to those mysteries so each revelation left players wanting more, driving them on to the end of the game,” Gonzales continued. 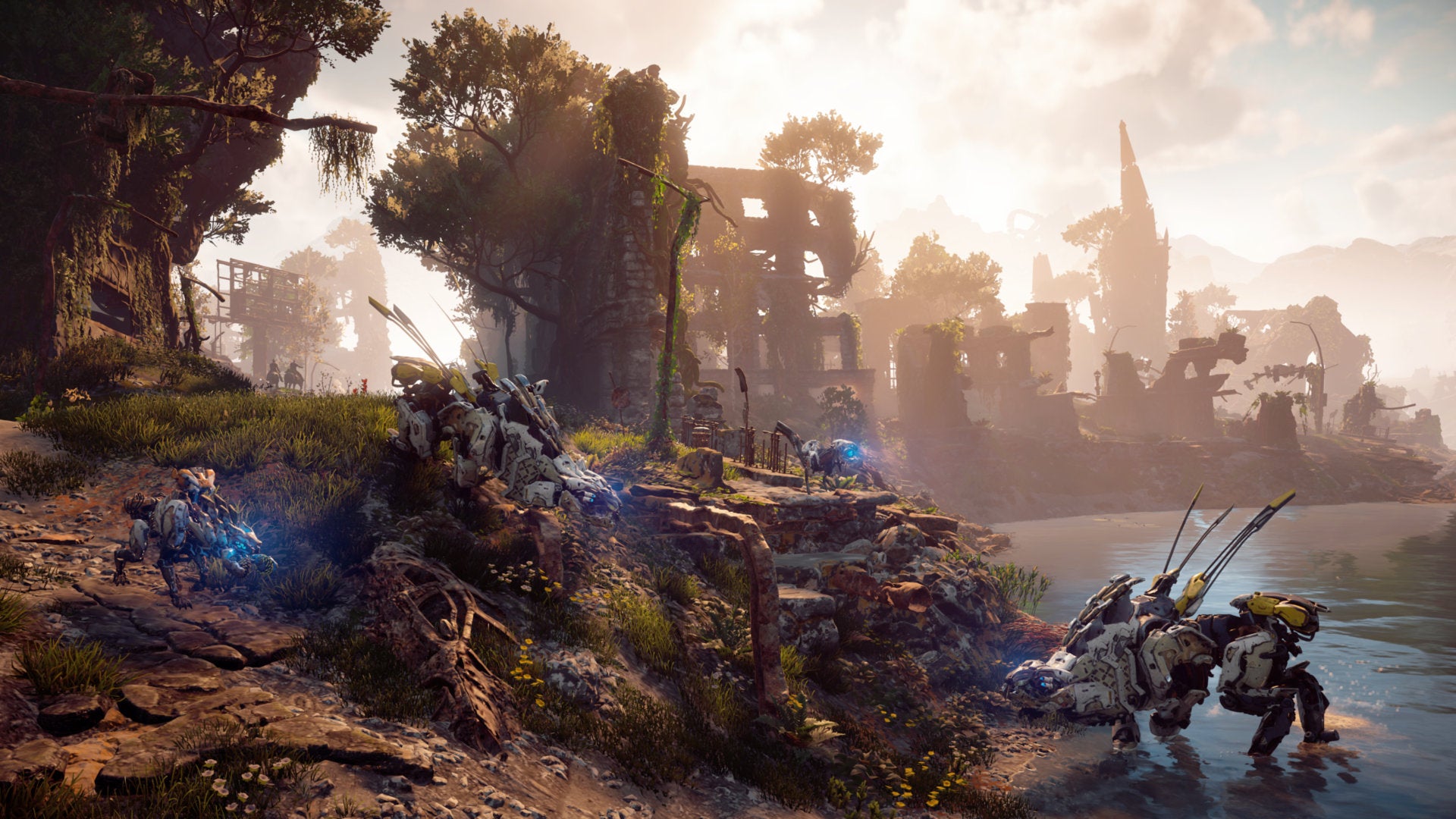 Getting something plausible yet exciting took hundreds of hours, Gonzalez told Kotaku, as Guerrilla Games imagined and re-imagined “every detail before even one word of dialogue was written”.

According to Gonzalez, some of the tougher scenes to write were the early segments of the game, when Horizon has to convince the player to care about Aloy.

“Writing (and re-writing, and re-writing) Aloy’s childhood scenes was hard work, but it seems to have paid off, because I find it impossible to watch and play those scenes without getting behind her 100 per cent,” Gonzalez said. “I still get a lump in my throat every time I see her pick up her bow and declare to Rost that she’s going to win the Proving, every time I watch her leap (literally) from girlhood to womanhood.”

So it probably isn’t a surprise to hear that those moments, along with other key Aloy scenes, were some of Gonzalez’ favourite things to write, too. But it’s an optional side-story that Gonzalez holds closest to his heart. Throughout the Horizon map, the player can discover something called “Vantages”, which are cached messages recorded in the old world. Once activated, the player can hear a story that is appended with a photograph that shows what a locale used to look like, before it was overtaken by nature.

“Looking beyond the main story, the narrative told by the Vantages also meant a lot to me,” Gonzalez said. “My mother has been in poor health for some time, and nearly died last fall. Taken literally, the mother-son relationship described in the Vantages story bears no resemblance at all to our relationship, but my aim was to portray a more universal bond of love.

“By the way, my mother has not just read every Vantage but has watched at least one complete playthrough of the entire game on YouTube. I’m fairly certain that she’s Horizon Zero Dawn‘s #1 fan among the over-70, non-PS4-owning demographic.”

By the end of Horizon, the big mystery of how the old civilisation was lost is indeed uncovered, but even so, Gonzalez says the world still has plenty of stories to tell.

“Can Aloy rebuild the technology required to reboot GAIA and restore control to the terraforming system before the biosphere spins out of control?” Gonzalez posed. “Who — or what — sent the mysterious signal that transformed HADES into a rogue AI? We know HADES escaped GAIA’s destruction by fleeing to the core processor of a derelict Titan… but what happened to the rest of GAIA’s subordinate protocols, and what have they been up to for the past 19 years? Probably nothing good.”

Here’s hoping that such juicy questions are explored in the DLC that Guerrilla Games is currently developing. I want to know what happened with Sylens, god damn it!