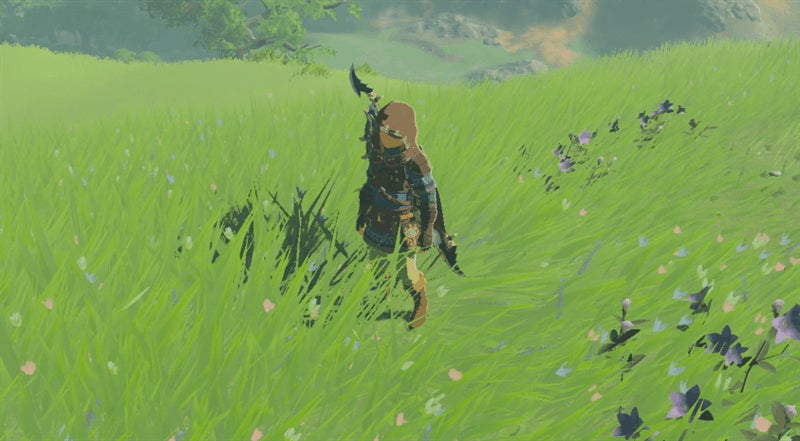 So you've been playing Breath of the Wild for more than a week. You've made some decent progress. You've finished some of the story and unlocked most of the map. It's only natural that you'd start fast travelling.

A few days ago I noticed that this was how I was playing, at least. After several dozen hours I've unlocked all but one of the sections of the map. My to-do list is longer than it's ever been, and I'm much more cavalier about fast-travelling from place to place. Open up the map, pick your destination, and boom. A loading screen later, you're a world away.

A couple of nights ago I was preparing to warp from the Tabantha Frontier down to the Gerudo Highlands, when I stopped myself. Why was I fast travelling? What if I rode my horse there, instead?

So that's what I did. I got on my dang horse and I rode all the way there. As it turned out, it really wasn't that far. The Breath of the Wild map isn't small, but it's also not quite as massive as it sometimes seems. It wasn't much of an inconvenience for me to ride across the westernmost edge of the map. But more importantly — and anyone who knows me probably already knows where I'm going with this — I found all kinds of cool things along the way.

There were some travellers being menaced by Bokoblins, of course. There was a spectacular vista as the sun set. I briefly got off my horse to check out an odd-looking rock formation and uncover a Korok seed. I noticed Mr Accordion in a location I had previously missed, and solved a new shrine challenge as well as its accompanying shrine. I passed a hill I'd been meaning to visit to complete a sidequest (no spoilers). Night had fallen and I decided to finally climb up and investigate this mysterious light I'd been seeing from across the map, since it was right nearby. (What I found was extremely cool. Again, no spoilers.) By the time I finally got where I was going, I'd done so many interesting things that I'd almost forgotten why I set out in the first place.

It's nice that fast travel is an option in Breath of the Wild. It's particularly helpful the deeper you get into the game, and great for quickly getting to the top of a tower in order to scout out new things to explore. But it's easy to fall into the habit of overusing it. Fortunately, it's just as easy to break the habit.

I think I'm going to start playing with a new self-imposed ruleset. No fast travel to shrines, only towers? Only one fast-travel per day? Something like that, at least. I still have so much to discover in this game (900 Korok seeds!) that I don't want to start skipping the journey just yet.