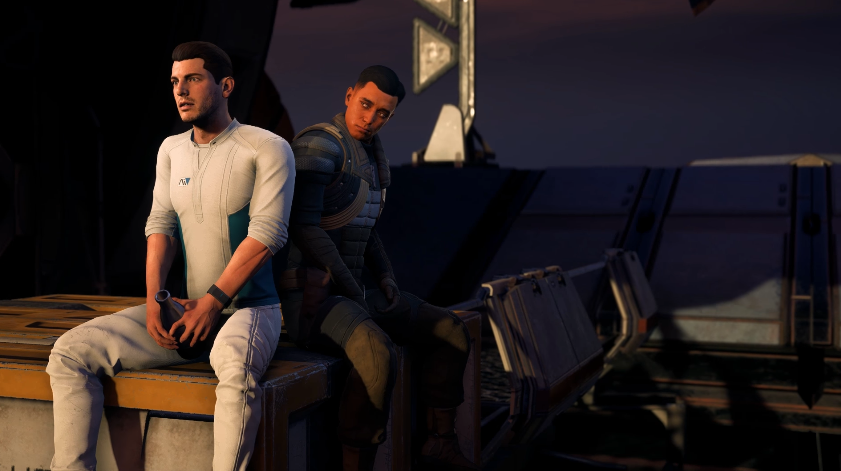 Mass Effect is a franchise known for letting players sleep with other characters, and while that sauciness makes a return in Andromeda, some romance routes have left fans heartbroken.

Since it was released, Andromeda has been criticised about how it handles gay romance options, particularly for male characters. On neoGAF, Reddit, unofficial BioWare forums, and on Twitter, there are hundreds of pages of complaints, with many people accusing BioWare of treating gay romance as an "afterthought."

On a basic level, people have pointed out that players who choose to play as a man can only romance two other men in the game. Male characters can romance more women, and players who play as a woman can romance more women and more men. BioWare games' romance plots usually involve dozens of optional conversations spread across dozens of hours of playing time, usually culminating with a profession of love (and/or lust) and then a sex scene. The pair of male gay options Andromeda includes aren't nearly as extensive as the other romance paths.

One option, a smuggler named Reyes Vidal, only appears in a couple of quests. Gil Brodie, an engineer on your ship, is also gay, but, unlike many of the women and straight men available for romance in the game, he's not actually a squadmate. As side characters, Reyes and Brodie can only offer the player short dialogue prompts, whereas full-on squadmates have long dialogue scenes that are further expanded on during missions, when the player can hear extra banter.

(Other sexualities get short flings like Reyes and Gil, but these are complemented with longer romance routes as well.) Players are also unhappy that both Reyes and Vidal only have make-out scenes that fade to black, rather than anything approximating the risque and partially nude sex scenes available for other sexualities.

It's a testy situation that has caused players to circulate infographics chronicling romance options across games. Across four Mass Effect games, male-on-male romance options didn't appear until the third game:

The issue, as dozens of fans have explained to me, isn't just that there are fewer options. Many fans describe feeling tricked because BioWare had boasted ahead of release about the ample romance options available in the game, but was coy when fans asked for specifics pertaining to non-straight options.

Trailers featured a male Ryder kissing women, but fans did not know what to expect when it came to queer romance options and many clearly had their hopes up. 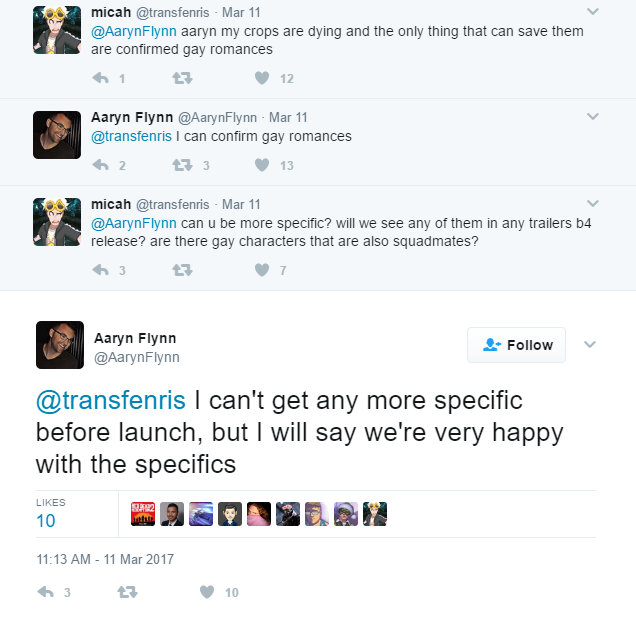 "I'd...hoped that [Mass Effect: Andromeda] would follow in [Dragon Age: Inquisition's] footsteps by announcing the romance options advance of release," Jon Erik Christianson, a writer for ComicsAlliance, told Kotaku. "I knew Iron Bull and Dorian Pavus were my options two months before DA:I came out...[for Mass Effect: Andromeda] everyone had to wait until launch."

Unable to know specifics, fans latched onto offhand Tweets, like one posted by Tom Taylorson, male Ryder's voice actor, which seemed to suggest there would be male gay alien romances: 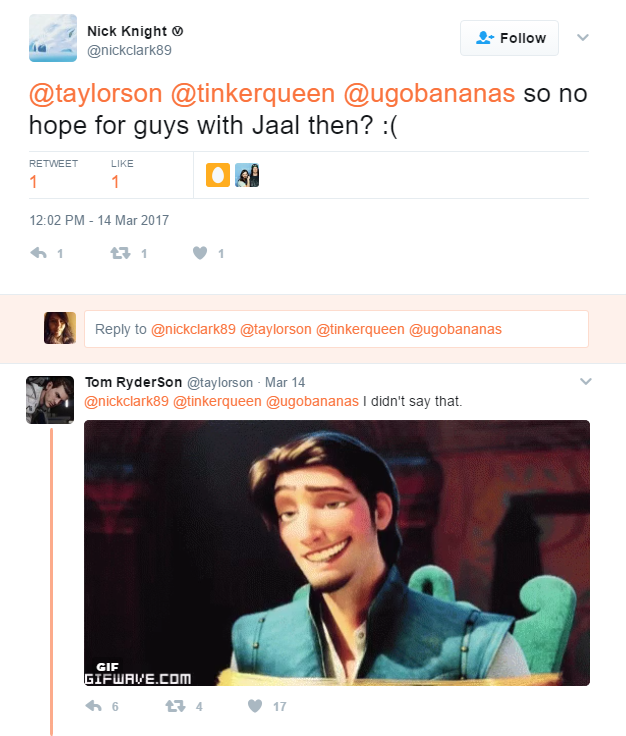 "Normally I'd say it would be silly to spoil things about characters before the game's even out, but they added the factor of teasing and I think that's what makes the difference," said Zunnoab, a fan.

Fans also looked at BioWare's wider track record, which includes Dragon Age: Inquisition, and assumed that, like that game, Andromeda would also offer deep romance options for all sexualities. The two franchises are made by different teams, but on the whole, BioWare has built up a progressive image that now influences what players expect from their games, regardless of which part of BioWare is making it.

"Mass Effect 3 showed me a world where gay men could be heroes who saved the world."

"BioWare has a reputation of including quality representations [of] gay and bisexual characters in their games, and it's up to all of BioWare to uphold that reputation," fan Chris S. told Kotaku. "But even ignoring the comparisons to Dragon Age, this still feels like a step back from the progress made in Mass Effect 3. In Mass Effect 3, there was a [gay male] option that was a squad mate and uniquely designed, something not in Andromeda."

Many of the disappointed fans I spoke to mentioned that they disliked that Reyes and Gil had aspects that could be recreated in the built-in character creator, rather than exhibiting unique facial characteristics available to squadmates. Details like those, combined with their sparse plotlines, also contributed to the fandom's fear that gay romance options weren't given much care.

After the release, fans pointed to in-game code that allegedly suggests Jaal, one of the new aliens, appeared to have lines referencing a potential gay romance route:

We can't verify that this code actually refers to a gay romance, but things do change during development: that's why developers often don't talk about specifics regarding what is or isn't going to be in a game. Still, this specific line of code was enough to inspire a hashtag on Twitter, #makeJaalBi, where tons of fans are demanding "equal opportunity" banging.

I reached out to BioWare to ask about Jaal's romance, and the wider outcry about gay romances, but did not hear back in time for publication.

Andromeda features an achievement called "Matchmaker," which asks the player to complete romances with three different characters. Straight, bi, and lesbian players can complete the achievement without wading outside of their sexualities, but strictly male gay characters can't.

"We cannot even gain an achievement unless we play as straight [male] Ryder (which sounds like conversation therapy to me and is no way attracting me)," said J Mittelstadt, another fan. "All I asked for is a place where I can go to and explore, have some action, meet awesome characters, get inspired, and maybe get invested with a fictional character in a safe way, since I can't just do that in real life."

Those who do settle for the in-game romances dislike the lack of polish, which admittedly plagues the game as a whole. As I mentioned in my review, animation shortcomings stand out the most during intimate scenes, but that issue is especially bad for gay players. Male on male scenes look awkward, as if the game does not know how to account for romantic scenes that don't involve women.

To be fair, anyone who isn't pursuing a straight romance with a human squadmate named Cora isn't going to get something very satisfying out of Mass Effect: Andromeda. Her sex scene is full of small touches that bring the scene to life.

The other sex scenes do not stack up. When you romance Peebee the Asari as a woman, for example, the sex scene makes it seem as if she is riding a penis that is not actually there: it's an animation that seems to be recycled from the male sex scene.

If you look at the other romance scenes, you'll note weird gaps where gay characters hold each other, as if the game does not account for the idea that two women or two men might be caressing each other. The underlying animation appears to treat all romance as if it is straight.

Even looking beyond such surface-level details, the specifics of the male gay romances aren't heartening either. The next few paragraphs have some story spoilers! Gil's storyline revolves around another friend, Jil, who pressures him into having a baby because it is his "duty" as a man. In the real world, some people treat homosexuality as "unnatural" because of how it affects reproduction, so the undercurrent to the storyline felt uncomfortable to some of the players.

"This whole story is one that could have had so much potential and broken down many barriers, but again it's a case of not being thought out well enough," wrote amoebae on neoGAF. "You don't decide to have a baby together because you've developed a deep and committed relationship and decided to take it to the next level by starting a family of your own- but rather a women who insists on highlighting that being gay means robbing the world of reproduction opportunities." 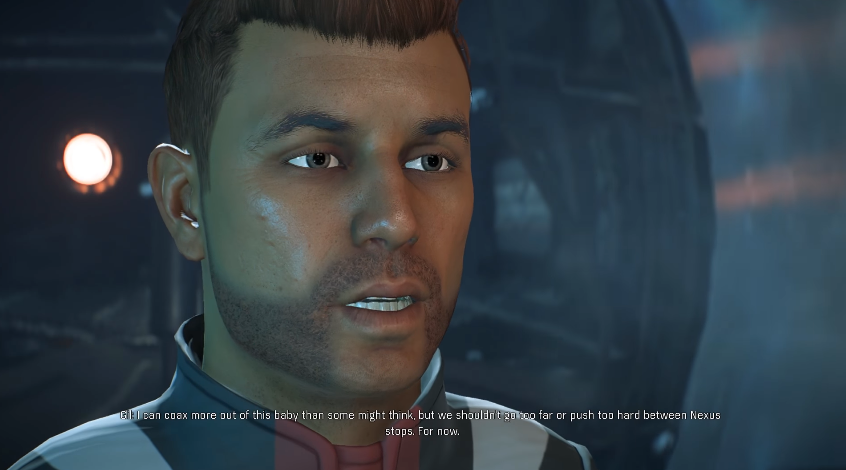 Reyes is revealed to be a villain, which some players feel is stereotypical. (In my game, Reyes appeared to be a cool character with a good twist, but I also didn't go in looking to fall in love with him. Players looking for real romance aren't satisfied by what Reyes can provide.)

Mostly, though, players feel hurt about gay romance routes because they really love BioWare, and don't want to be treated as, in the words of at least one fan, second-class citizens.

"Mass Effect 3 showed me a world where gay men could be heroes who saved the world," said Brendan Routh, a BioWare fan. "Heroes who could love other men and not be ashamed about it. Heroes who in fact took strength from their love and channeled into a desire to save the world. It meant a lot to me."

"[Romance in older BioWare games] made me feel acknowledged as a gay gamer, it made me feel understood and less alone but most importantly, it gave me a bigger sense of self-respect and self-worth because it showed me that, yes, I as a gay gamer was worth developing content for that was just as good and substantial as everyone else's," said Stefan, another fan. "[BioWare] games taught me that I didn't have to feel content with game developers treating me like a second-class citizen just because I was a gay man."

One fan did express discomfort with the pushback against the studio. "The truth is, BioWare — or any game company — isn't obligated to give us anything," said Hernan L, another fan. "Getting worked up about this makes it look like all we do is complain and cry foul when we're not represented to the degree that we want.

"That's what makes it worse, though," he continued. "It feel[s] like sometimes we shouldn't even ask for more representation because it makes us seem needy or needlessly offended when the truth is all we're really asking for is the same things the rest of the gaming community has."

"We love BioWare," Mutant_anemony, a player, told Kotaku. "We just want to know they love us, too."