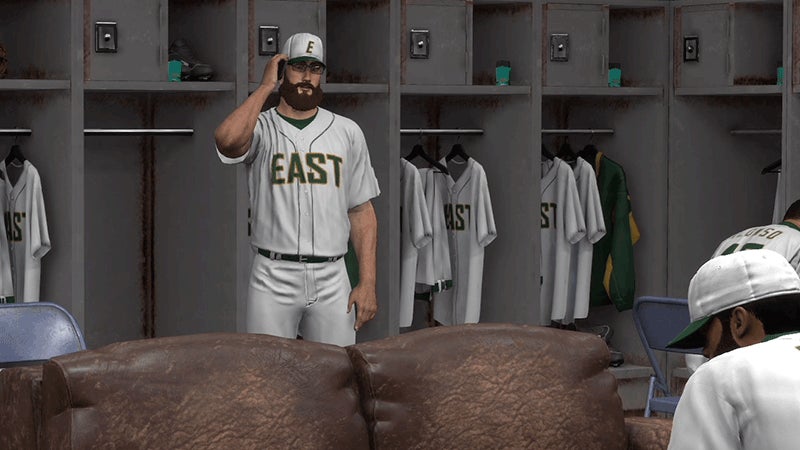 It's not just about playing games, building stats, unlocking perks and making your mark on Major League Baseball. That stuff is all present and accounted for, but this year's Road to the Show gets more personal.

This is done through a series of documentary-style asides in which the player's player is asked to make important decisions about his baseball career. He'll consult with his advisor, hire an agent, and role-play out interactions that were all handled through simple menu choices in previous iterations of the popular game mode.

Let me tell you about my player, Mike Shirt. 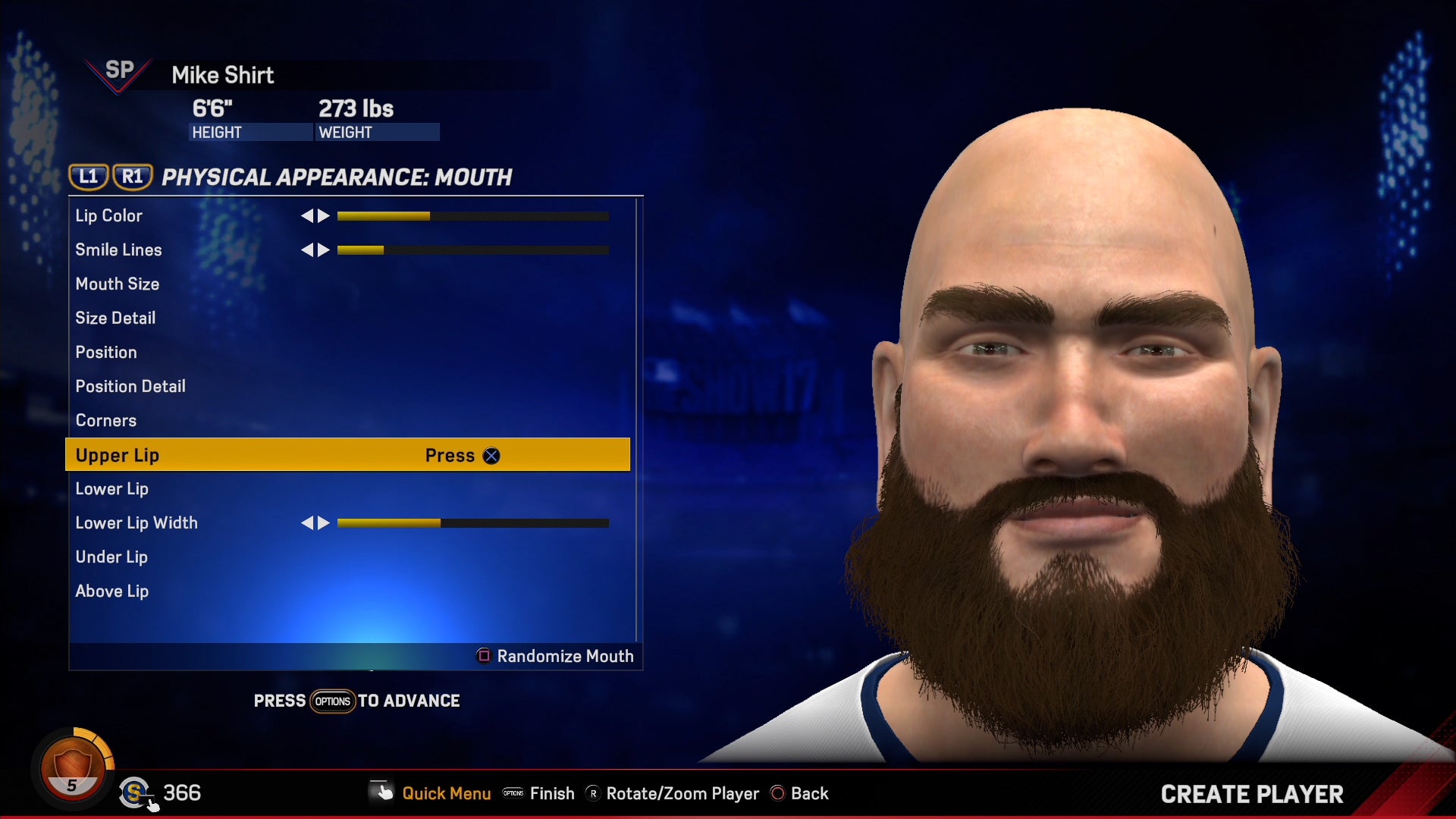 The result of 20 minutes of character creation.

I named him Mike, after myself, and Shirt, because I wanted the back of his jersey to read like a label from the live-action Batman TV show from the '60s. Like me he is bald and bearded. He stands 6'6" and weighs as close to me as the game allows. His beard would have more silver in it, but video games haven't figured out multicolor beards yet. One day.

Mike Shirt is a pitcher, because I enjoy MLB The Show 17's metered pitching mechanic. It is the video game golf swing of pitching mechanics. Tap to set power, tap for accuracy, accidentally hit a guy in the face, repeat. 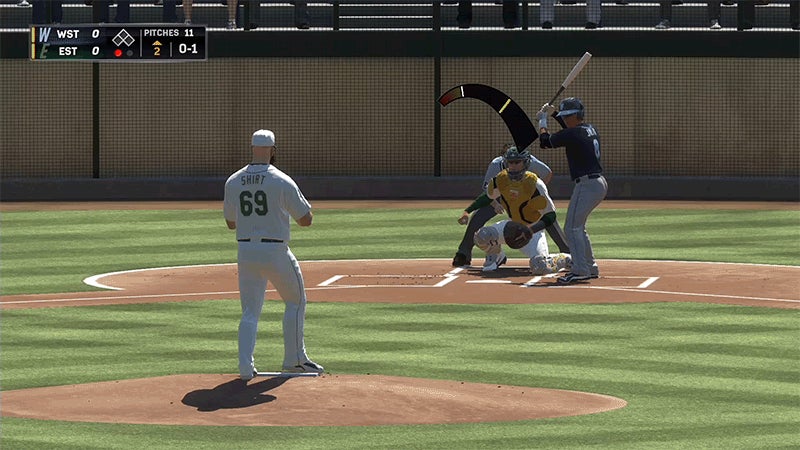 I spent some training points, played a couple of "look what I can do" games and then settled in for the big draft day. Sitting alone in a room that's far cleaner than I imagine Mike Shirt sitting in, he anxiously awaits the results.

MLB The Show 17's role-playing system has dialogue choices that really allow the player to work up a fiction around their baseball player. It's much more fun than choosing a single menu option as in previous years. For instance, I decided that Mike Shirt was not a fan of warm and/or muggy climates. And then tragedy struck: 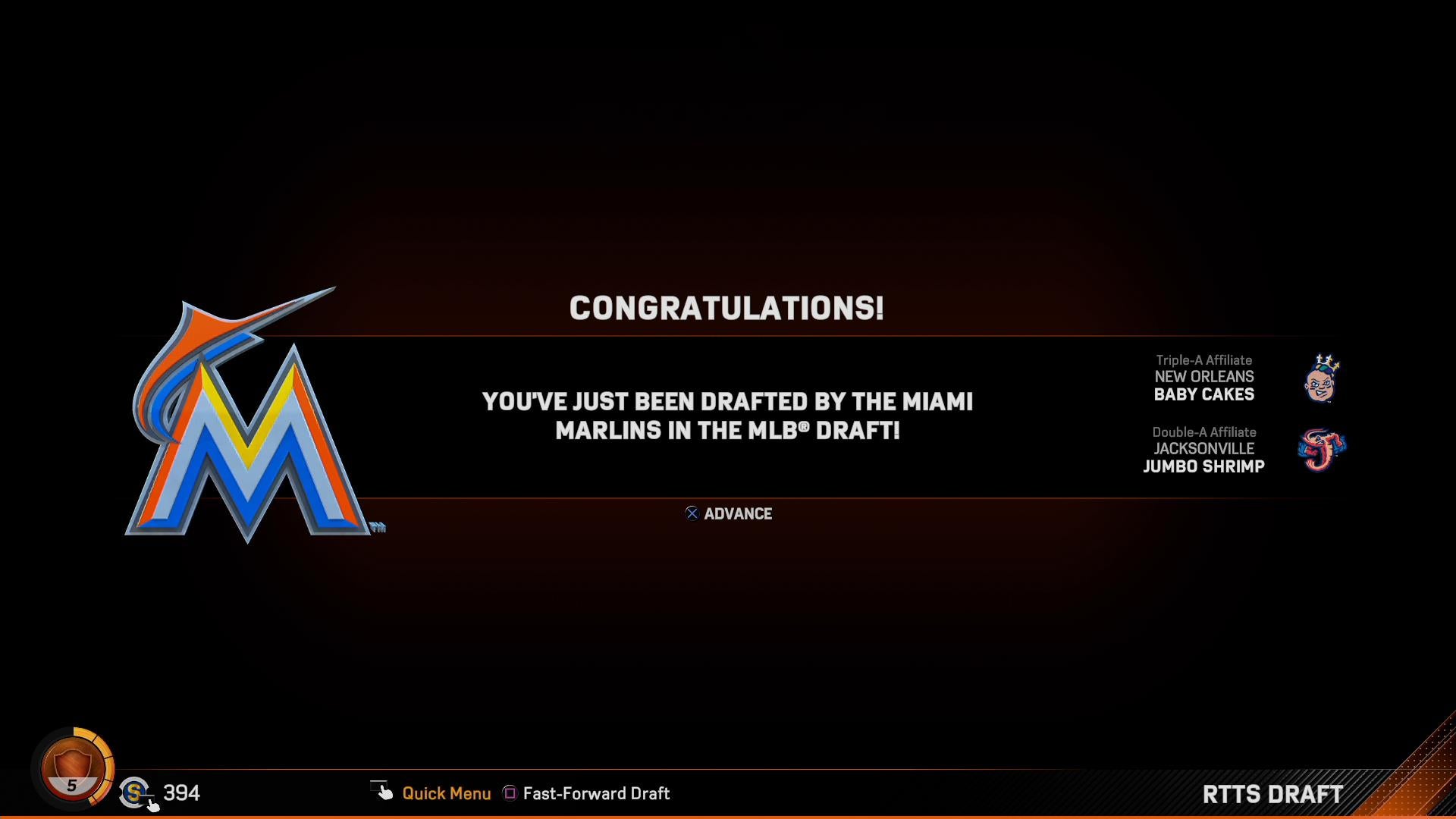 Obviously a game breaking bug that replaces the word "Sorry" with "Congratulations."

The prospect of being tied to a team based out of Florida with a Triple A affiliate in New Orleans just wasn't going to work for him.

In last year's Road to the Show, the draft message is followed by a menu asking if the player accepts the draft or goes to college for a year, earning training points that might help him get a better spot the next time around.

Here's what happens in this year's version:

In MLB The Show 2017, the scene plays out as a phone call between Mike Shirt and the general manager of the Marlins, who is probably on the other line eating an apple and wearing a Hawaiian shirt like some sort of arsehole. Imagining that made my choices a little earlier. 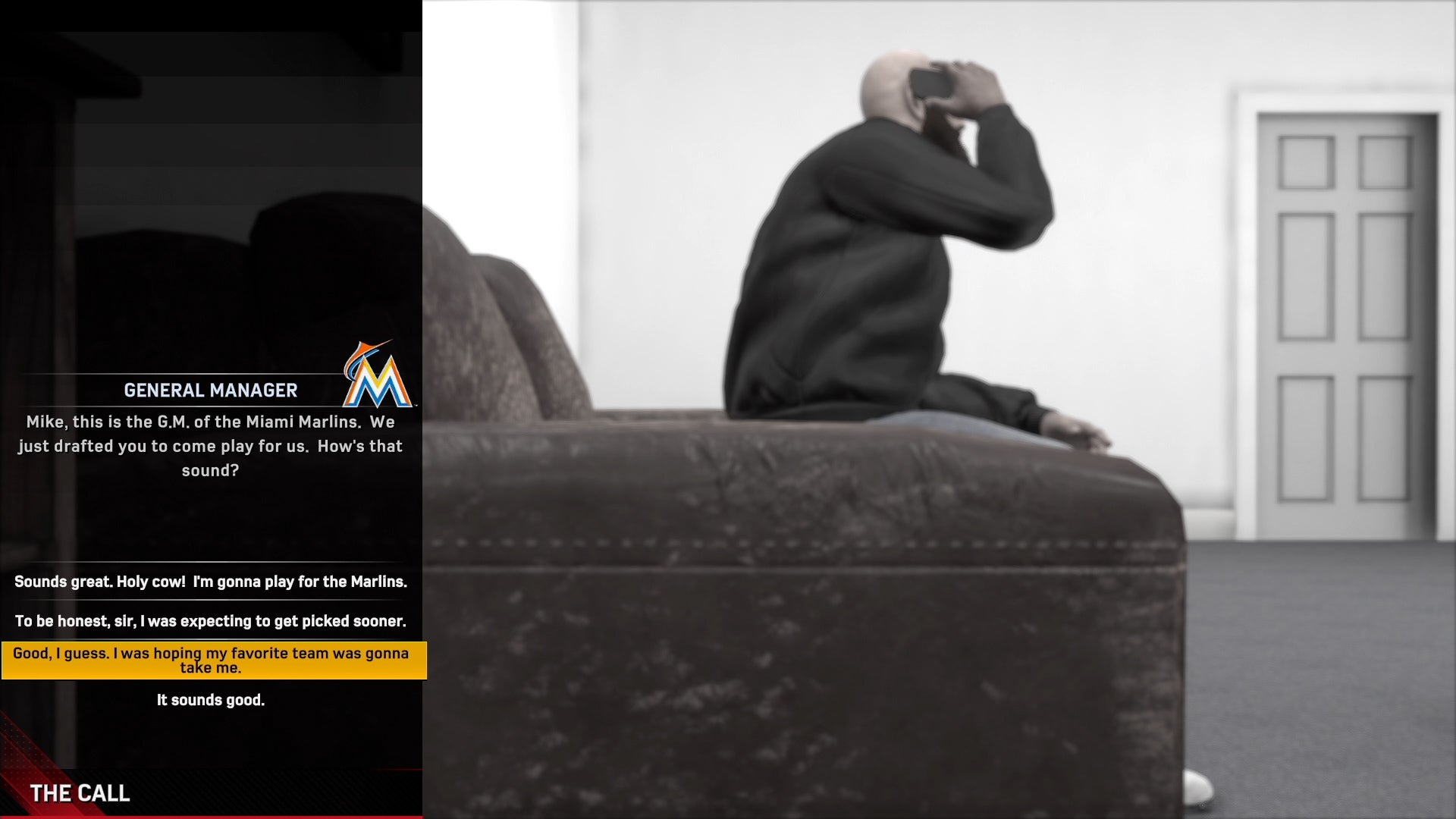 Or just any other team, really.

This is not an easy choice to make. I knew Mike Shirt did not want to play for the Marlins, but in the interest of getting on with the game, should I settle? 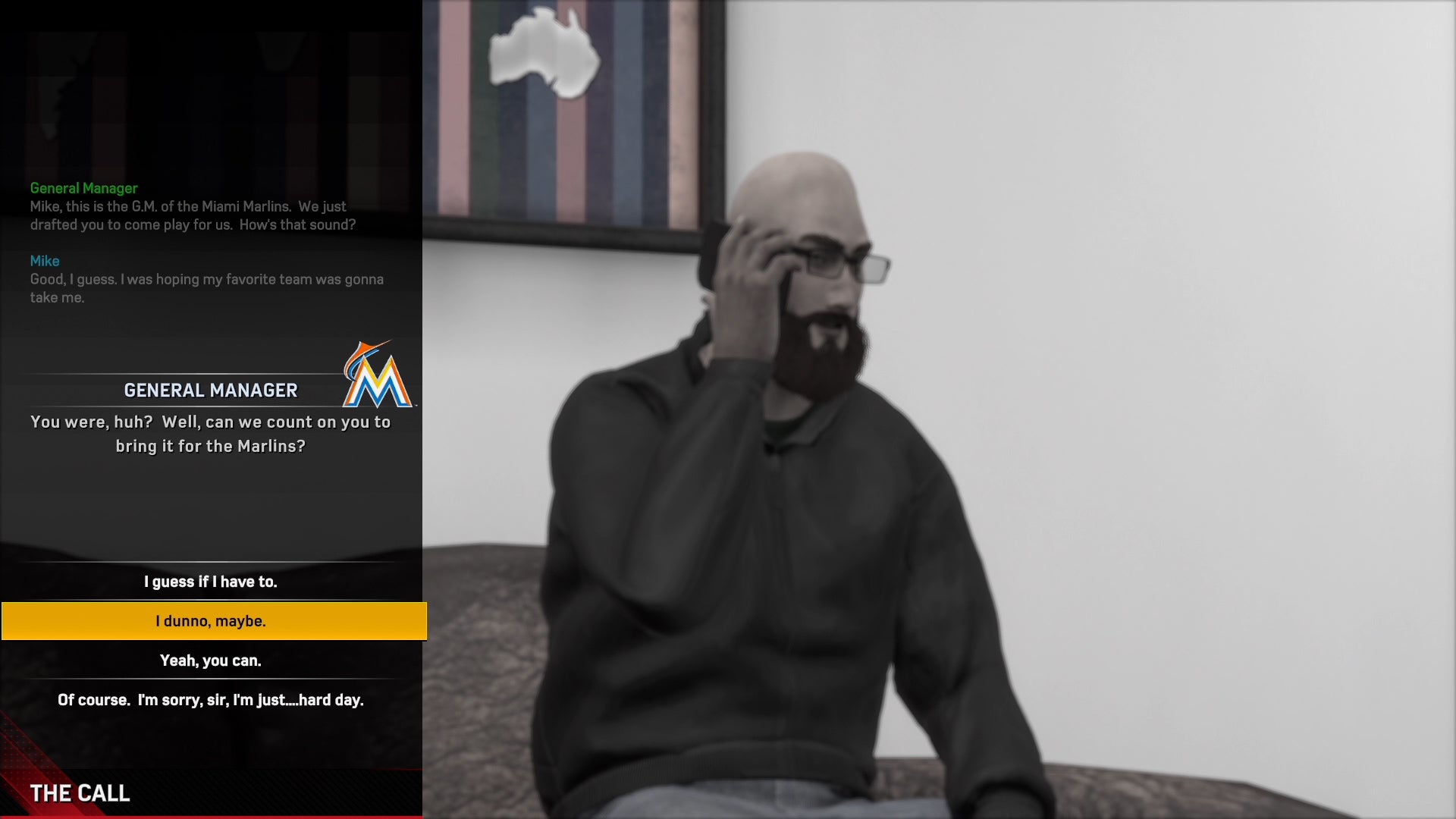 This is how I responded to the priest presiding over my first marriage.

This maudlin reaction to what is supposed to be good news could all be chalked up to bald and bearded teen angst, at least until the next bit. 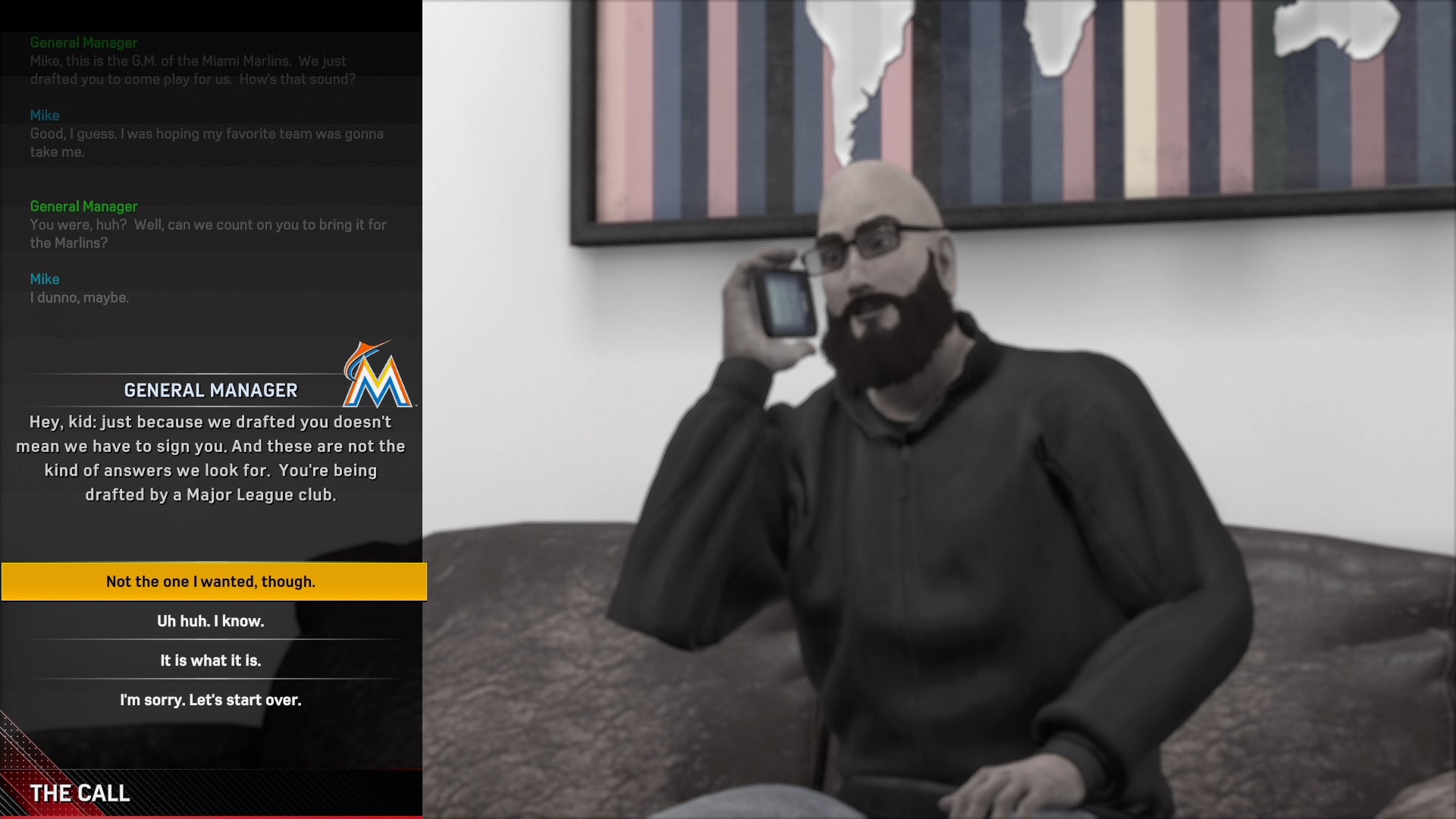 I suppose they couldn't make "Fuck you and your Marlins" a chat option here.

That should do it. 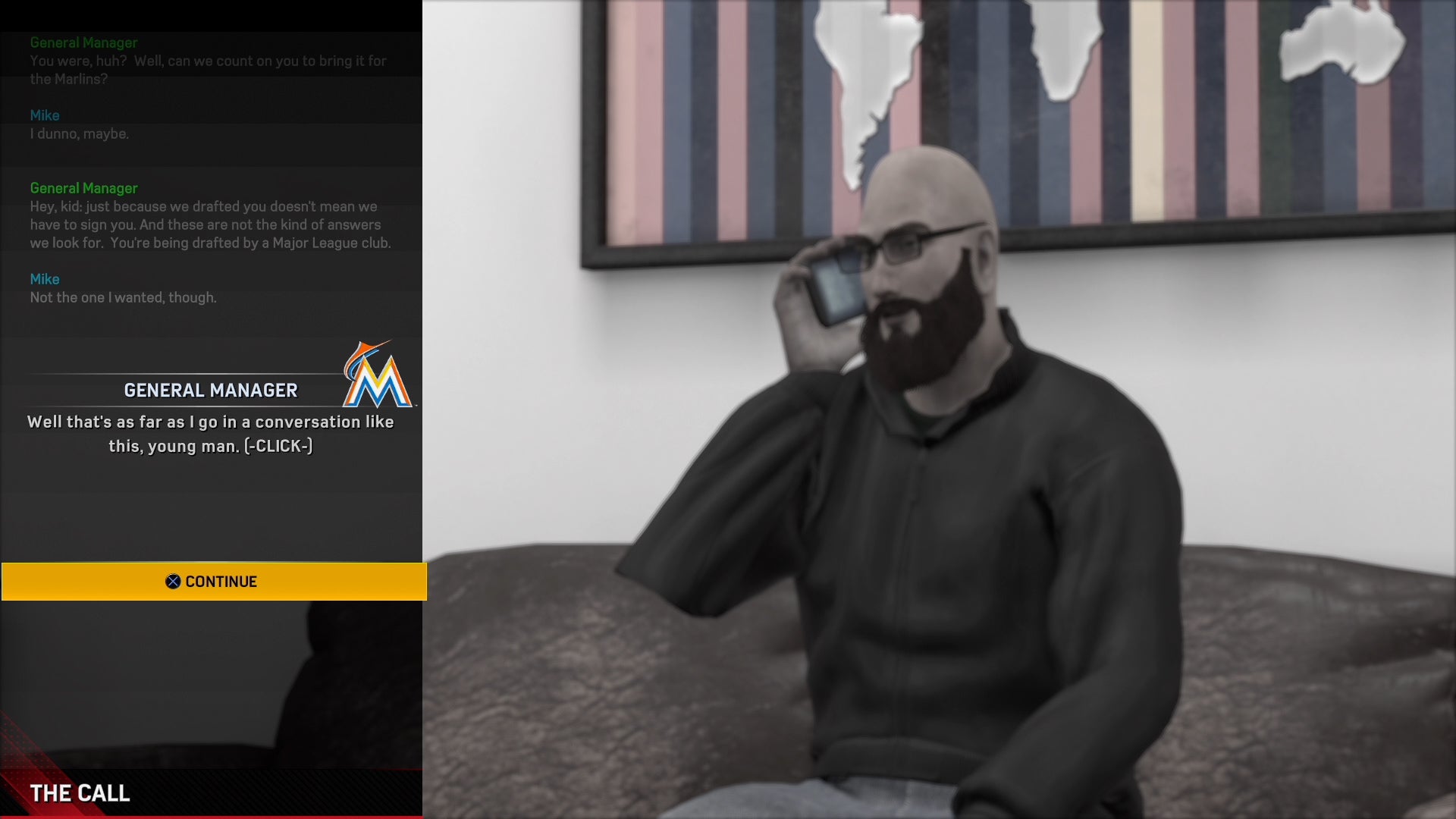 And so I let my draft offer slide. Into a trashcan. Which I then set on fire. Then I peed on it. 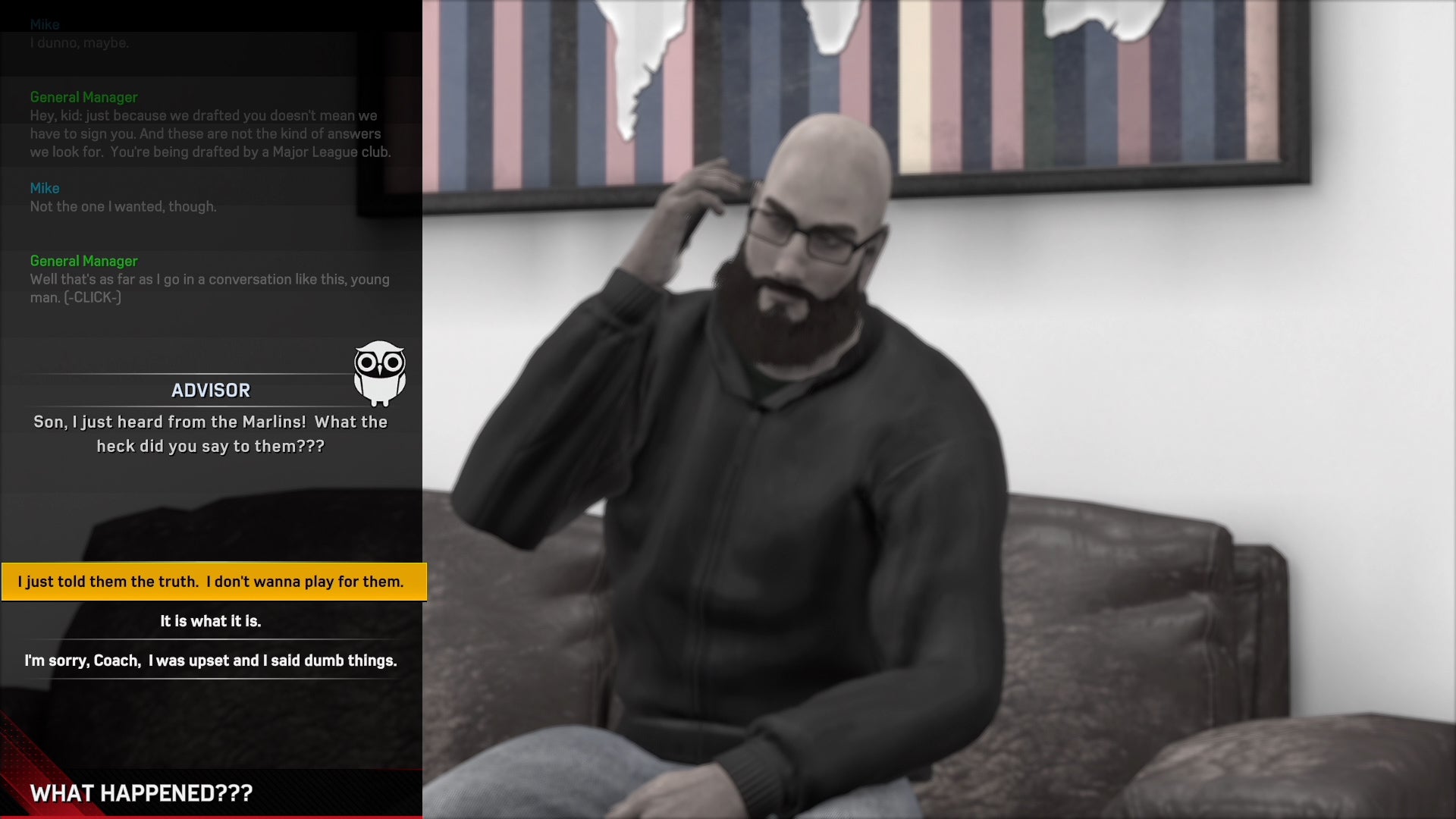 I calmly explain to him that it's all his fault for building up the dreams of a large burly teen. 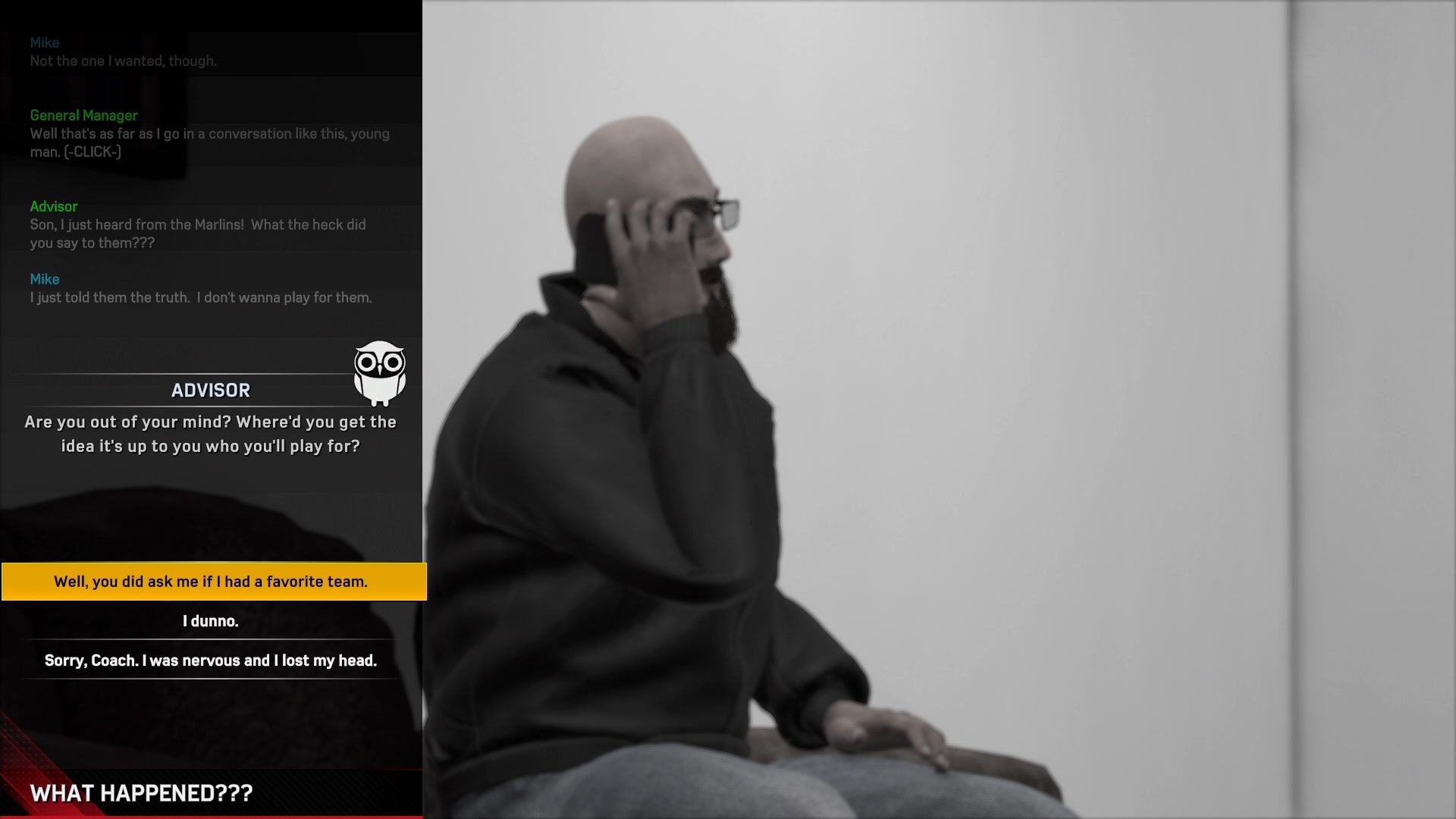 It's not perfect — after a year of college I was again approached by the Marlins, which seems unlikely. Then again, maybe their other draft pick got killed or arrested or something, and they had no choice. 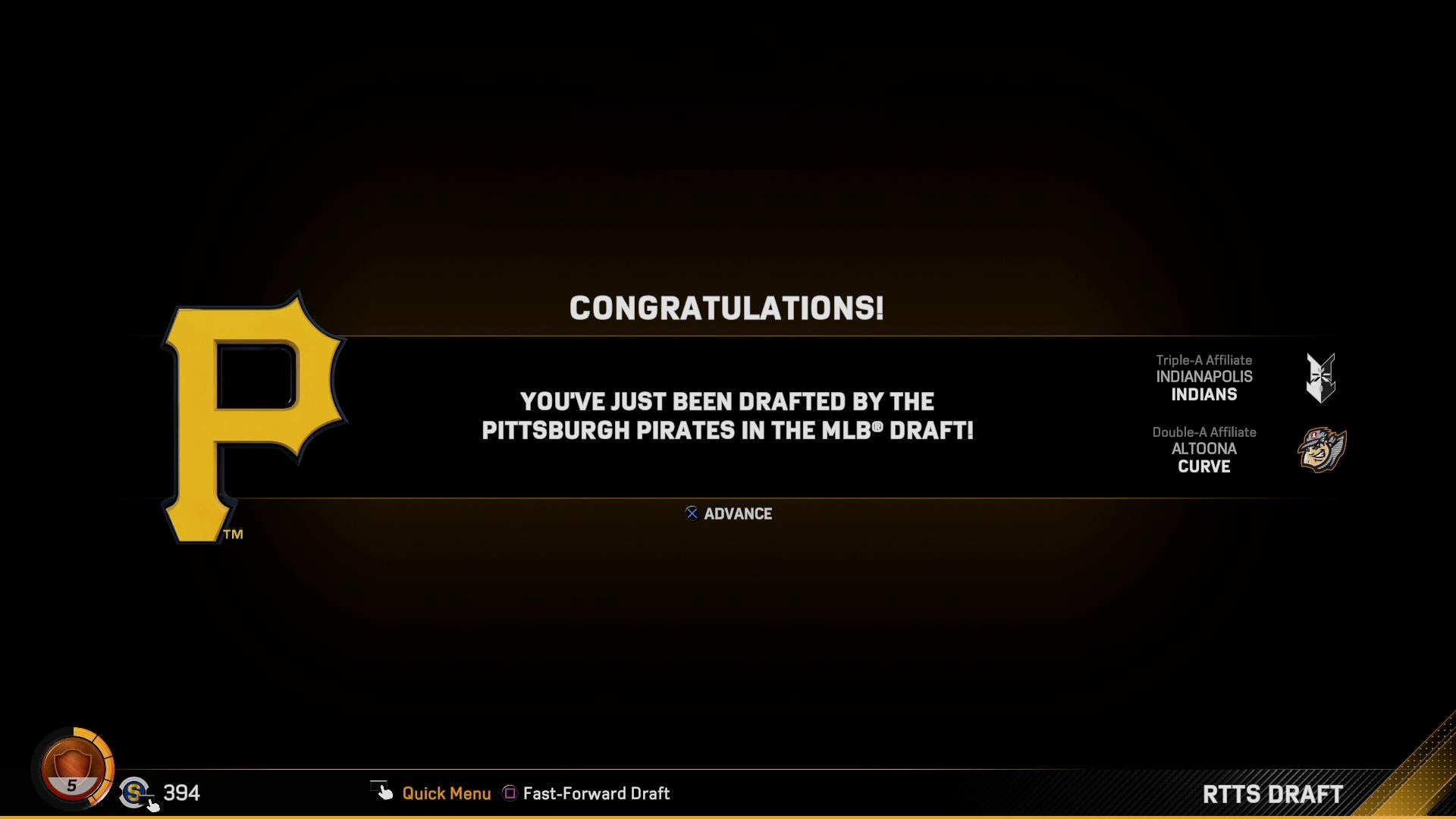 Between the role-playing options and the sweet baseball action, I'm really enjoying MLB The Show 17's Road to the Show mode so far. I'm not normally a big baseball guy, but I'm a huge fan of Mike Shirt. He'll be one to watch.

MLB The Show 17 launches tomorrow exclusively for the PlayStation 4.