GTA Online is mostly known for violence and open world shenanigans, so most people don’t realise just how much the fandom cares about clothes. For over a year now, some of the most hardcore players have been using online forums to gripe about the fashion options available for women characters in GTA Online.

Back in February 2016, a thread titled “Dear r* (regarding overall female clothing choices)” was started on GTA Forums. 2,000+ posts later, the thread is still active thanks to nearly daily posts where people vent their frustrations or share ideas on how GTA’s clothing options.

The thread was started by Quinn Flower, a fan who has been playing since GTA San Andreas — she still has fond memories of dressing up Carl Johnson in different outfits. When GTA Online rolled around, she found herself feeling disappointed. There just wasn’t enough clothing options for women, she says.

So, fashion-conscious players such as Flower sought alternatives. Stylish fans discovered that a glitch allowed characters to wear boots over pants, thereby letting folks adopt a more modern look. In February 2016 , Rockstar “fixed” the glitch, which angered Flower — and that’s what prompted her to start the thread. 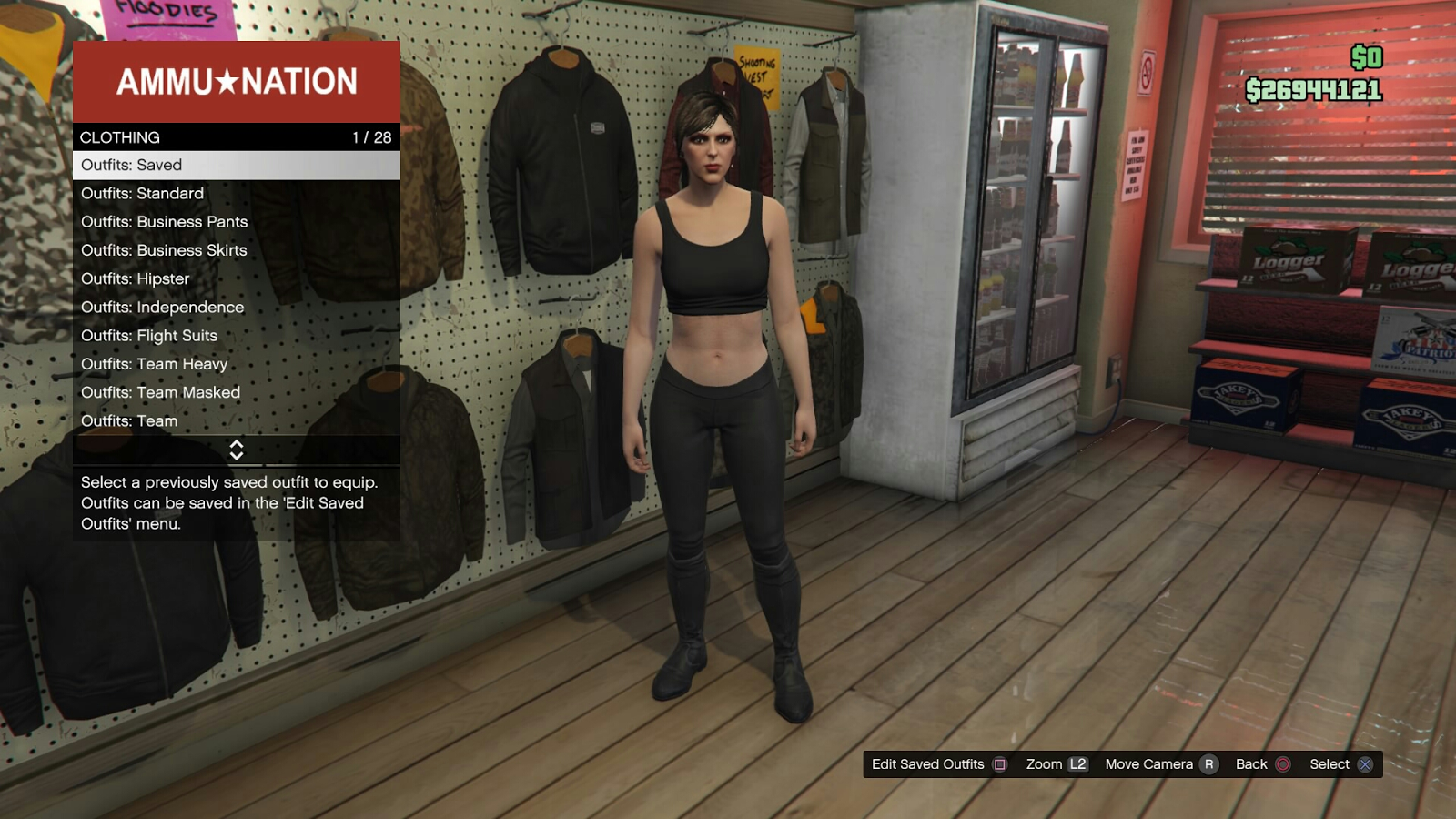 (Boots over pants glitch, before it was patched.)

“I was kinda at my limit with the female clothing (or lack of female clothing) in GTA Online,” Quinn explained to me. And she turned her anger into a post, which she admits was originally very ranty:

I mean do u have a female working on the art design of the clothing for online? If not you need to go to a fashion show because clearly u do not know fashion.

Why do I have to use a mod menu or glitch to make a outfit that I see the npc’s wearing already!

God your so incompetent I mean what was wrong with wearing knee high leggings? Seriously if it has clipping issues then get off your butts and fix it. While we are add it add proper black leggings call them dark black leggings idk the vip ones were perfect and made my outfit look cute.

Idk this is bitch and moan but many of us have been waiting for proper layering and actual female clothing that some of us uses.

Why can’t I wear leather straps with a necklace unless it’s the gold cuffs. Why can’t I wear boots with jeans? Why no long hair or nail polish r*. Stop making the game geared more to males seriously. There are a lot of gamers who are female and you need to stop ignoring us.

To her surprise the thread became popular. She had struck a nerve: many players believed women were an afterthought for Rockstar, a feeling that was compounded when people noticed new DLC often added very few new clothes for women. Players also pointed out that some dresses and skirts tend to clip through player’s legs while in cover, so the few things that Rockstar did add still managed to feel unimportant.

In the thread, players described wanting all sorts of things: more hair options, nail polish, more types of dresses, better and more detailed layering options (wearing skirts with leggings, etc), handbags, belly button or nose piercings, more shoe options, high-waisted pants and crop tops. It may sound like a lot, but male characters have comparably robust options available to them. At best, most of the dresses in GTA Online are niche or retro, fans complained. Others disliked that some clothing options could technically be worn by both genders, but the option isn’t actually available. 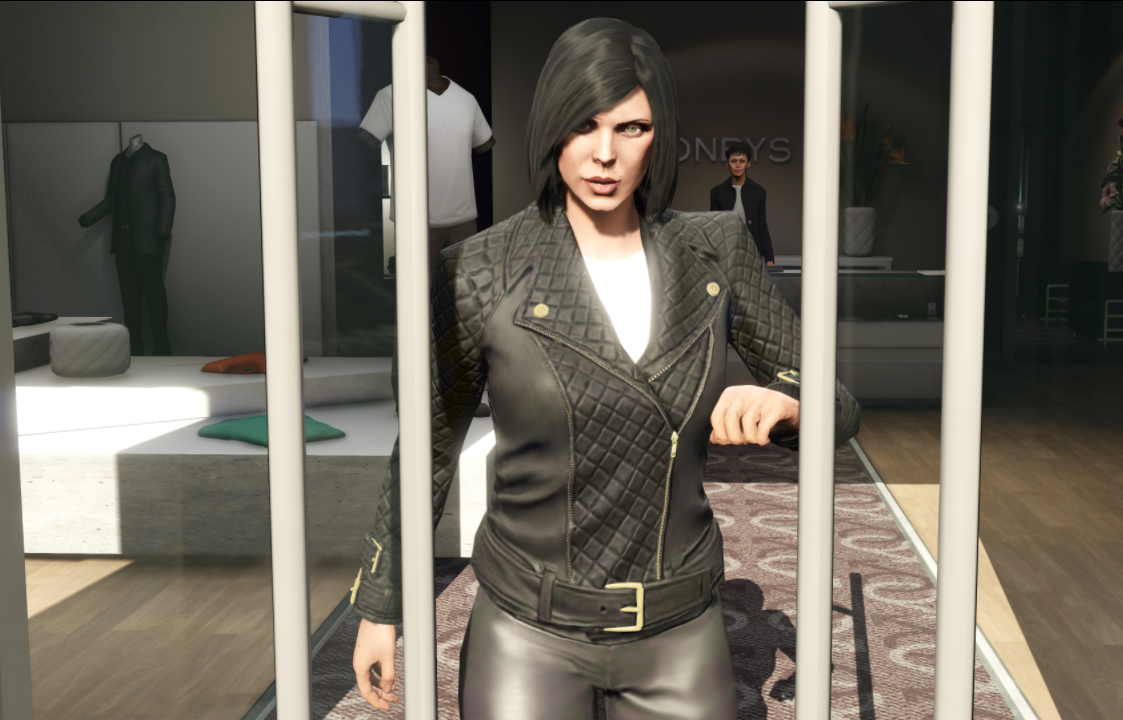 For Quinn, clothes are just as important as the guns and cars: fashion helps sell the role-playing aspect of the MMO. Players don’t just want nice whips and fancy mansions, they want to express their specific style, because it provides a more immersive experience. They want this so bad, many say they’re willing to pay extra just to wear nicer threads.

“The idea of a sultry, well put together girl taking names and getting into action has a lot of visual appeal to me,” explained Malik, another GTA Forums user who posts regularly in the thread.

Beyond the number of options, fans like Flower feel that Rockstar doesn’t actually understand modern fashion trends, or know what real women would want to wear. Instead, the game is filled with military-style clothes, or niche items like animal masks. Players feel that Rockstar is too focused on gimmicky or themed items, rather than letting people dress like actual human beings. Players like Flower want Rockstar to “Go look at fashion blogs or Pinterest, get some ideas from there.”

Many players I spoke to pointed to games like Saints Row and APB which have, in their opinion, better fashion options. “In Saints Row or APB anything is layerable,” explained Quinn Flower. “You can even put custom logos on clothing (not just your crew logo.)”

Part of the frustration also is that NPCs can wear better clothes than the actual player. Players have taken to sharing many screenshots of random characters who have enviable outfits. 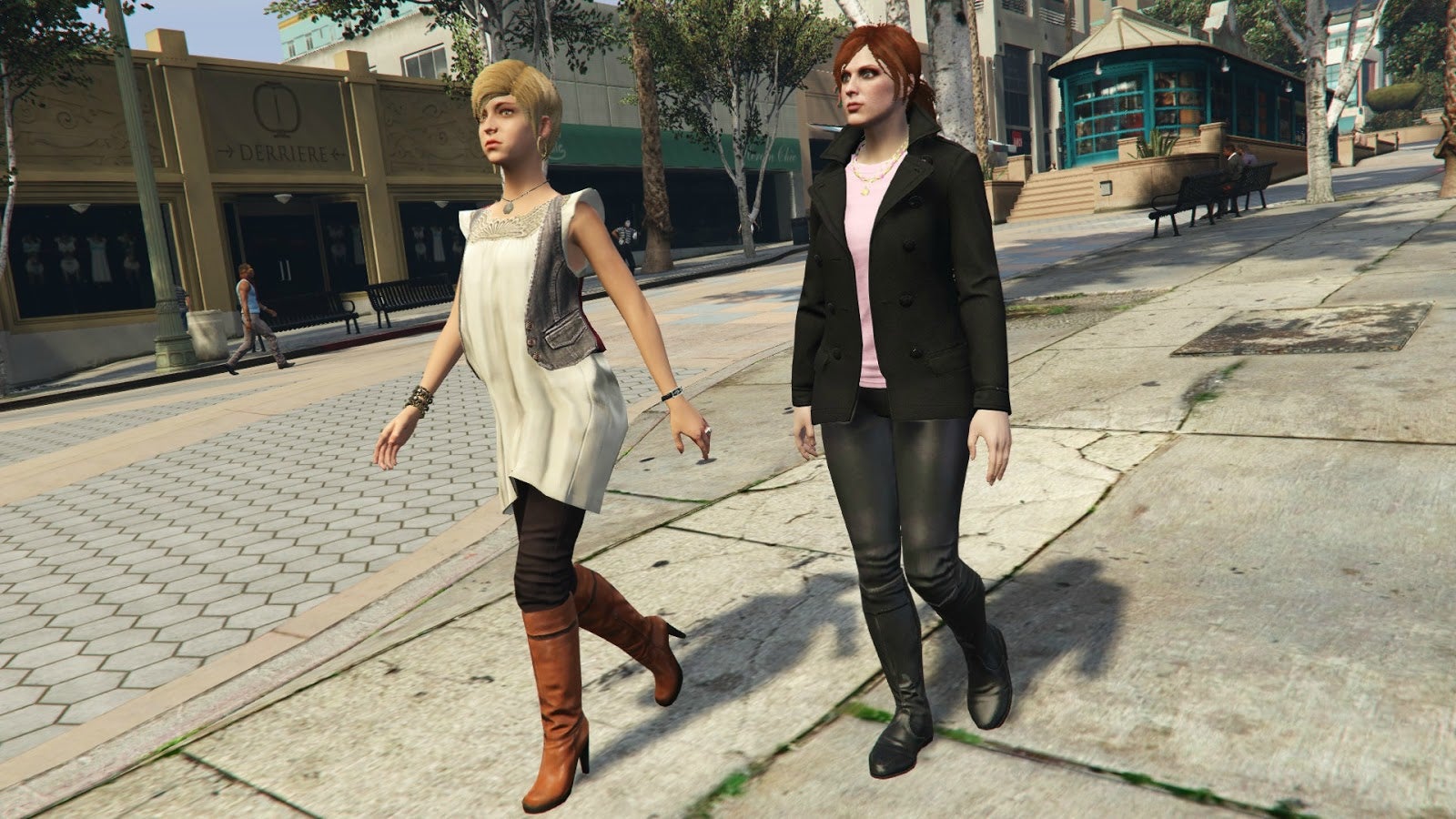 “Next time when you’re in game, look at the female NPCs or NPCs in general and they have most of that what we are requesting,” said Flower.

The game is full of teases like that. Even random closets in the game have better clothing options than what the player can wear, as GTA Forums user Commander S, points out: 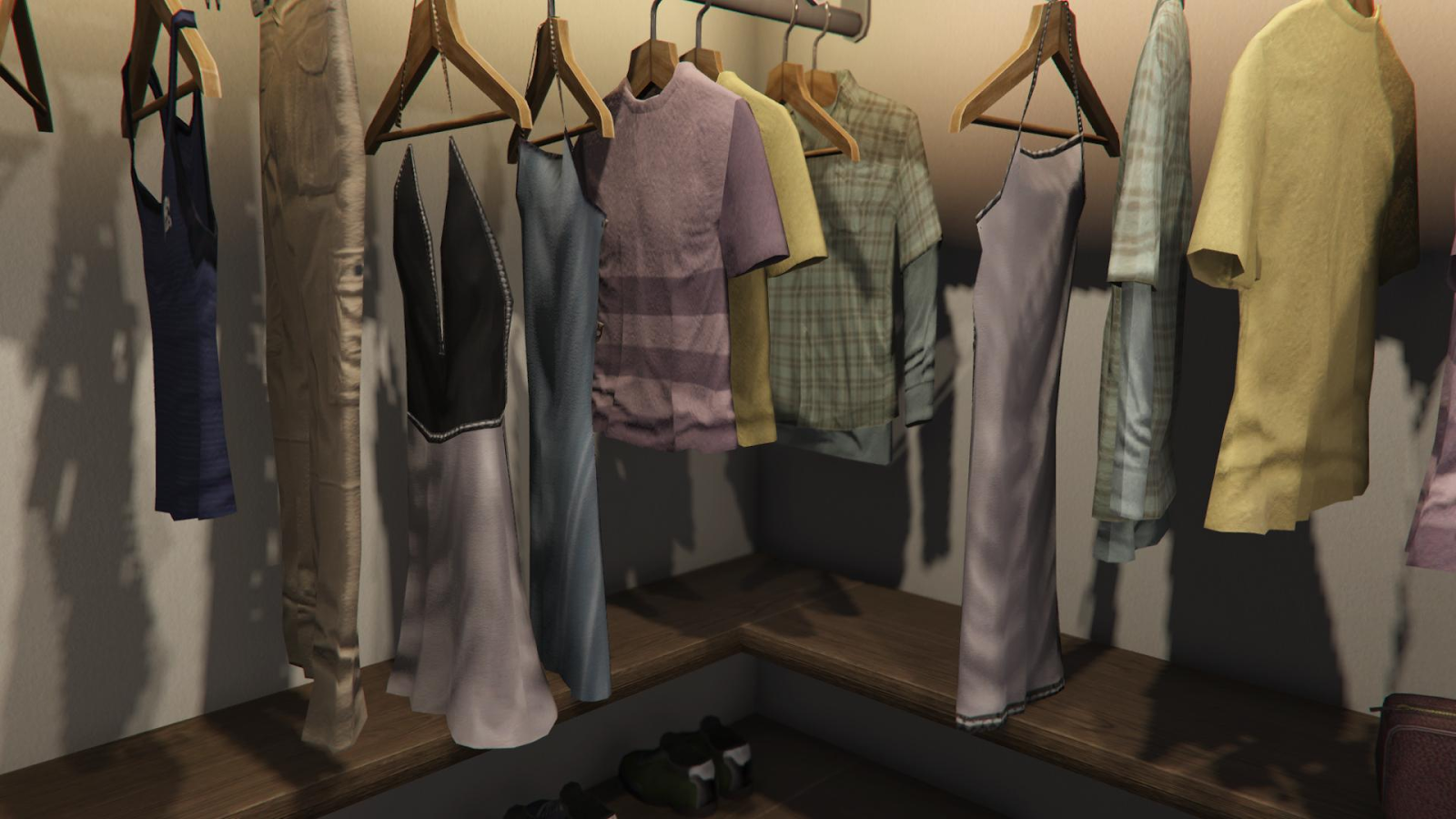 Some fans in the thread want Rockstar to look at their own marketing materials for better ideas. Fans pointed out that ads for certain GTA Online updates, like The High Life update, include clothing and hair options that are not actually available to players: 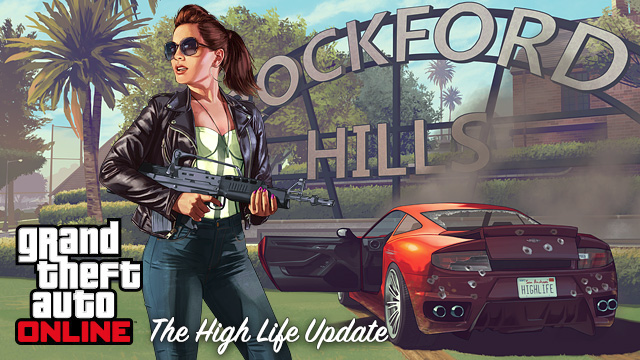 Instead of waiting for Rockstar to add better options or more variety, some fans are getting creative. User DeniLHell created a series of “fake dresses” using tank tops and skirts. By matching certain colours and patterns, she was able to create some pretty convincing dresses: 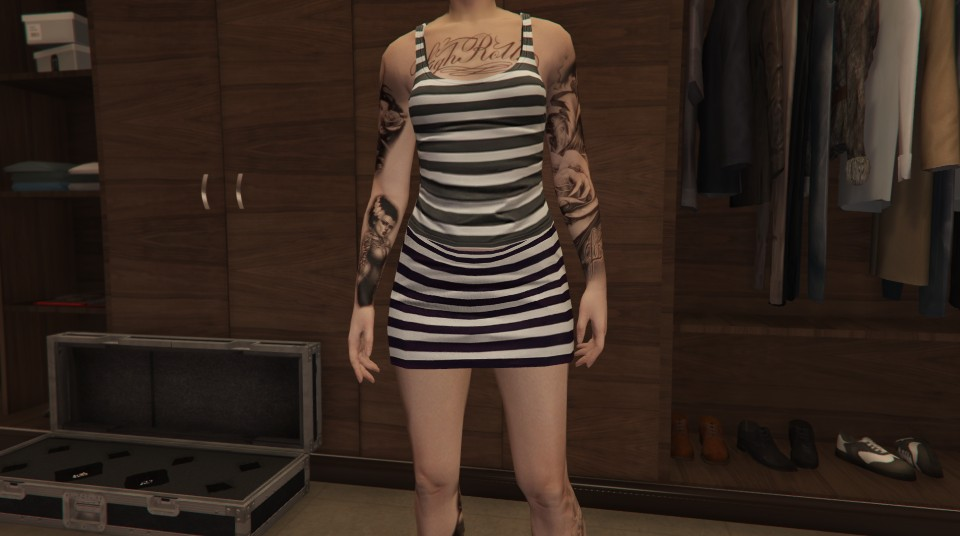 Miss-RI95, used a similar technique to create her own little black dress: 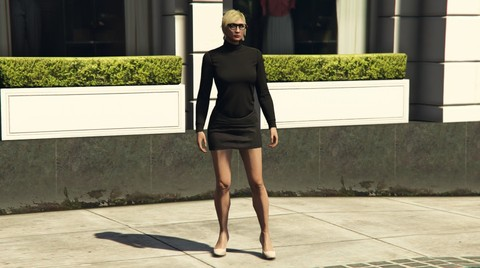 These methods are crafty, but they’re also only temporary solutions. That’s why the women’s fashion thread has become one of the most popular conversations on the GTA Forums. For the most part, the thread is positive and civil, but as with any public forum, things can get heated. Some players accuse fans of just wanting to play “Barbie dress up.”

My favourite posts in the thread are when people are incredulous that there is any problem at all with GTA clothes, and decide to start a female character for themselves…only to discover that they dislike the available options, too.

Even the naysayers have become supporters of the cause, or at least offer their support. Even if these fans aren’t bothered by the lack of clothing, why not add more options for those who care?

“Please don’t think we are an afterthought,” urged Quinn. “I know people say ‘Go play dress up or The Sims‘ – But why should I? I wanna be a bad arse chick [in GTA Online] while looking good.”