Patsy Walker, AKA Hellcat! Gave Me Everything I Ever Wanted In A Superhero Comic Book 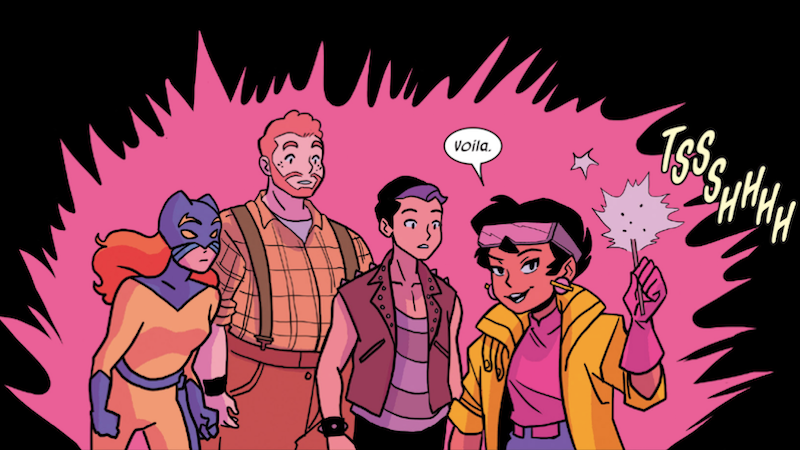 With an entirely straight face, yesterday's final issue of Patsy Walker, AKA Hellcat! asks you to ponder what deviousness a villain could possibly be getting into at a shopping centre. The answer should be obvious: Purposefully mis-arranging everything in the nearest department store.

These are the sort of deceptively low-stakes premises that have kept the book chugging along for 17 issues and today, in its series finale, Kate Leth, Brittney Williams and Rachelle Rosenberg close out Patsy Walker's three volumes of adventures with a love letter to Hellcat's fans.

On a whim, I started reading Patsy Walker when the series first started back in 2015 after coming across it randomly in a comics shop. While it was Williams' cover and the series' odd name that initially caught my eye, it was Leth's take on Patsy's life as a 20-something living in Brooklyn that made the book feel familiar.

Over the more than 70 years that Patsy Walker has appeared in comics, she's lived as the star of an in-universe comic book, an Avenger, a private investigator, and a woman who literally survived going to Hell. In a weird way that only makes sense if you don't think about it too hard, Patsy Walker managed to fit all of that history onto the page, yet carefully into the background where it wouldn't be so obtrusive. If you look closely enough, all the elements of the old-fashioned Patsy are still there (romance, stress, back-stabbing friends) but they're subtle and charming like an inside secret between friends. 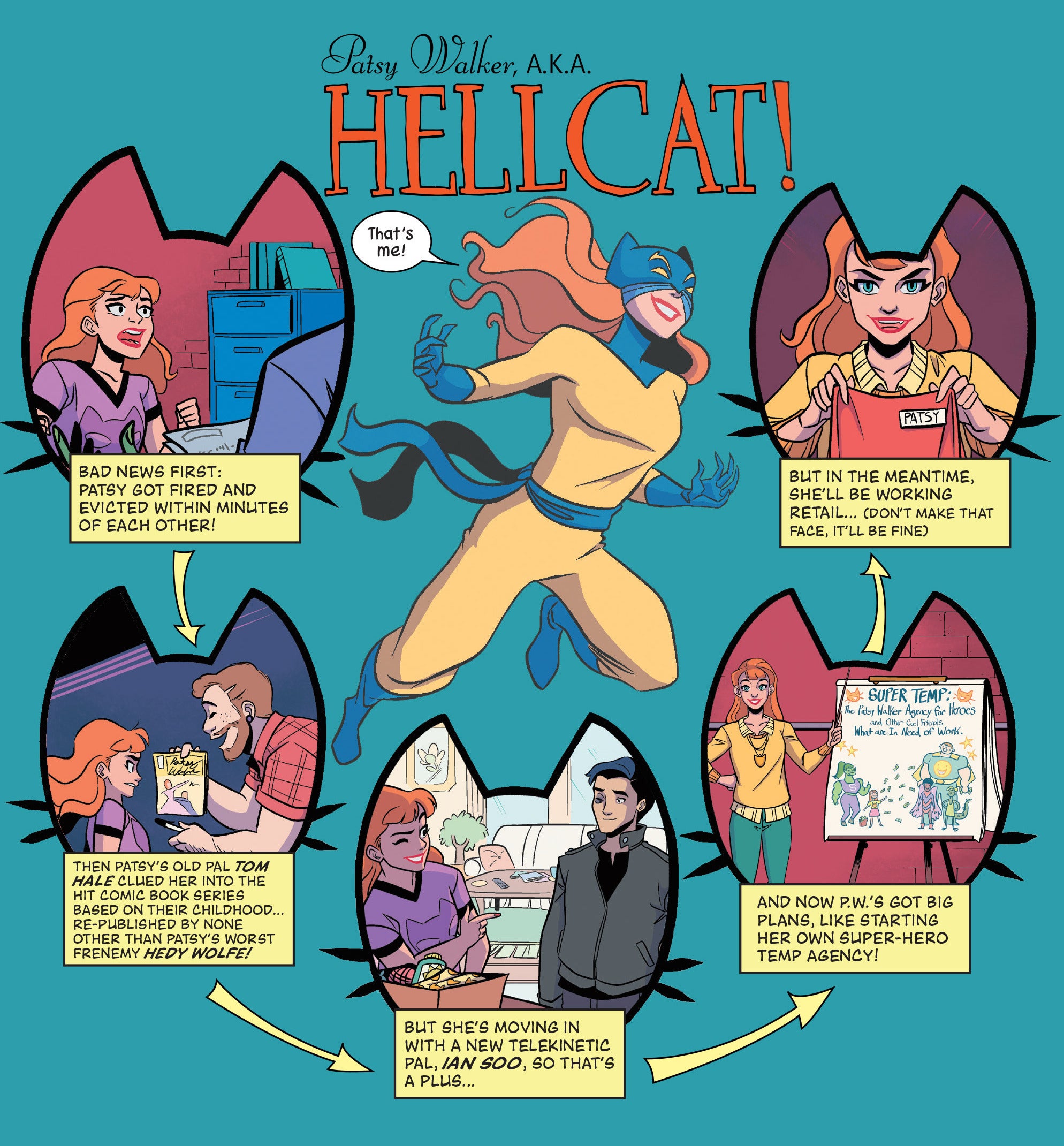 At a time when the rest of the Marvel Universe was in a panic over the roaming Terrigen cloud or confused as to how the original X-Men travelled through time to the present, Patsy Walker's concerns were much more grounded in reality. Patsy lost her job. Patsy needed an apartment. Patsy was trying to figure out how to live her life as a regular person when superheroics alone couldn't and didn't pay the bills.

So Patsy did what any sensible person who knows Luke Cage would do: Started a business that will turn her superpowers into a profit. Rather than setting up a Brooklyn branch of Heroes For Hire, though, Patsy creates a pop-up temp agency for people with powers and — surprise — she's tended to end up at most of the gigs.

It's a clever means of moving the heroine around the slice of NYC that Patsy Walker has carved out for itself. The premise also broadens the book's cast of characters to include a wide array of folks with all kinds of gender expressions, sexualities and sensitivities to sunlight. 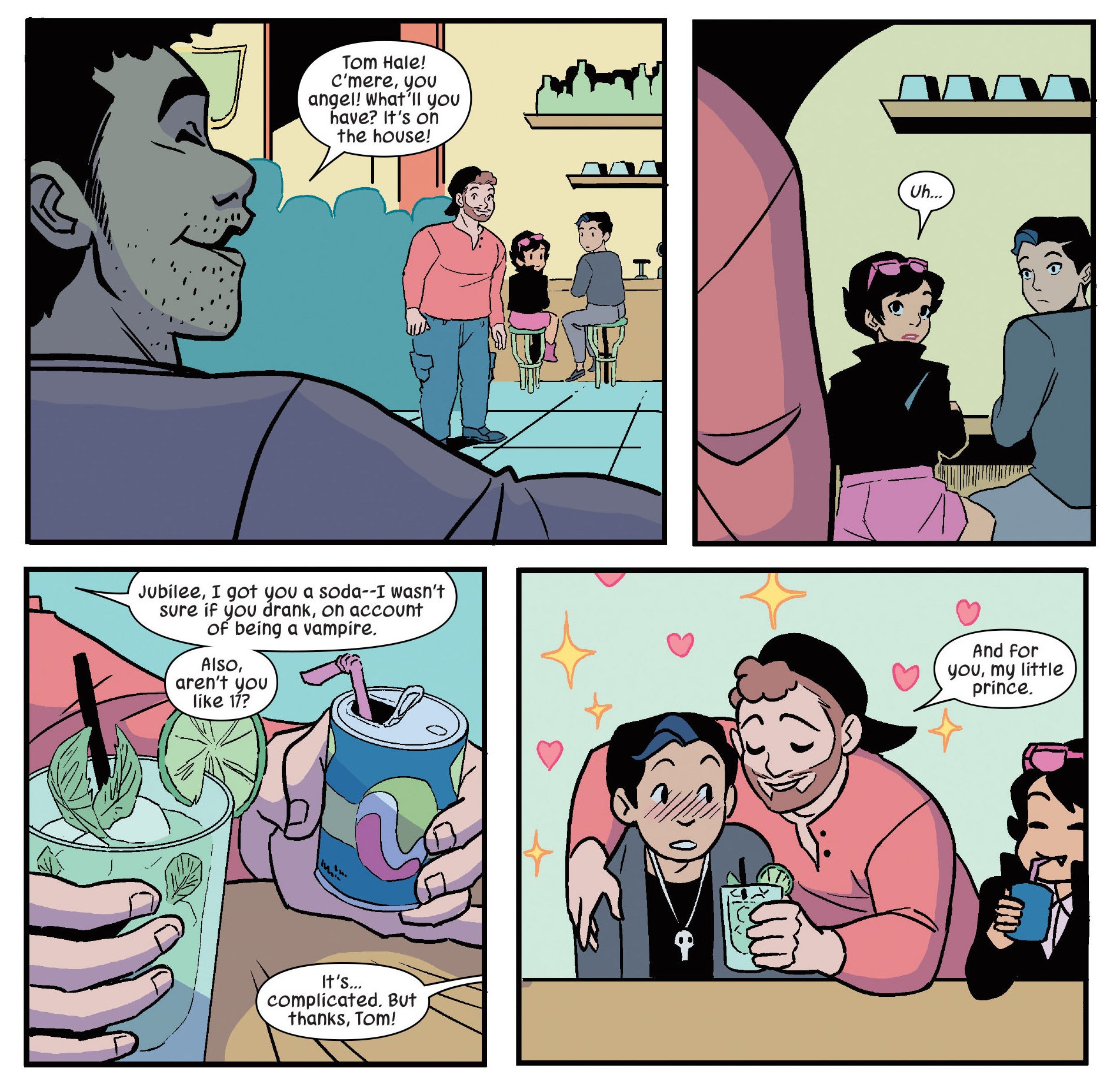 Patsy Walker was, in the most literal sense, a street-level hero whose struggles and triumphs oftentimes skewed towards the more manageable and mundane by comics standards. In one issue, for instance, she defeats a villain trying to force her out of her new apartment with the army of bedbugs he controls.

The series excelled at centring everyday slice-of-life concerns, but Patsy Walker's creative team also shone when it opened up a little to let in elements of the broader Marvel Universe. During Civil War II, the series showed off how to tell a good, meaningful story in the midst of a publisher-wide event. Patsy's relationship with She-Hulk is what made Patsy Walker possible (She-Hulk gave Patsy that job originally, and then fired her from it) and their friendship is the narrative core for much of the series' run. 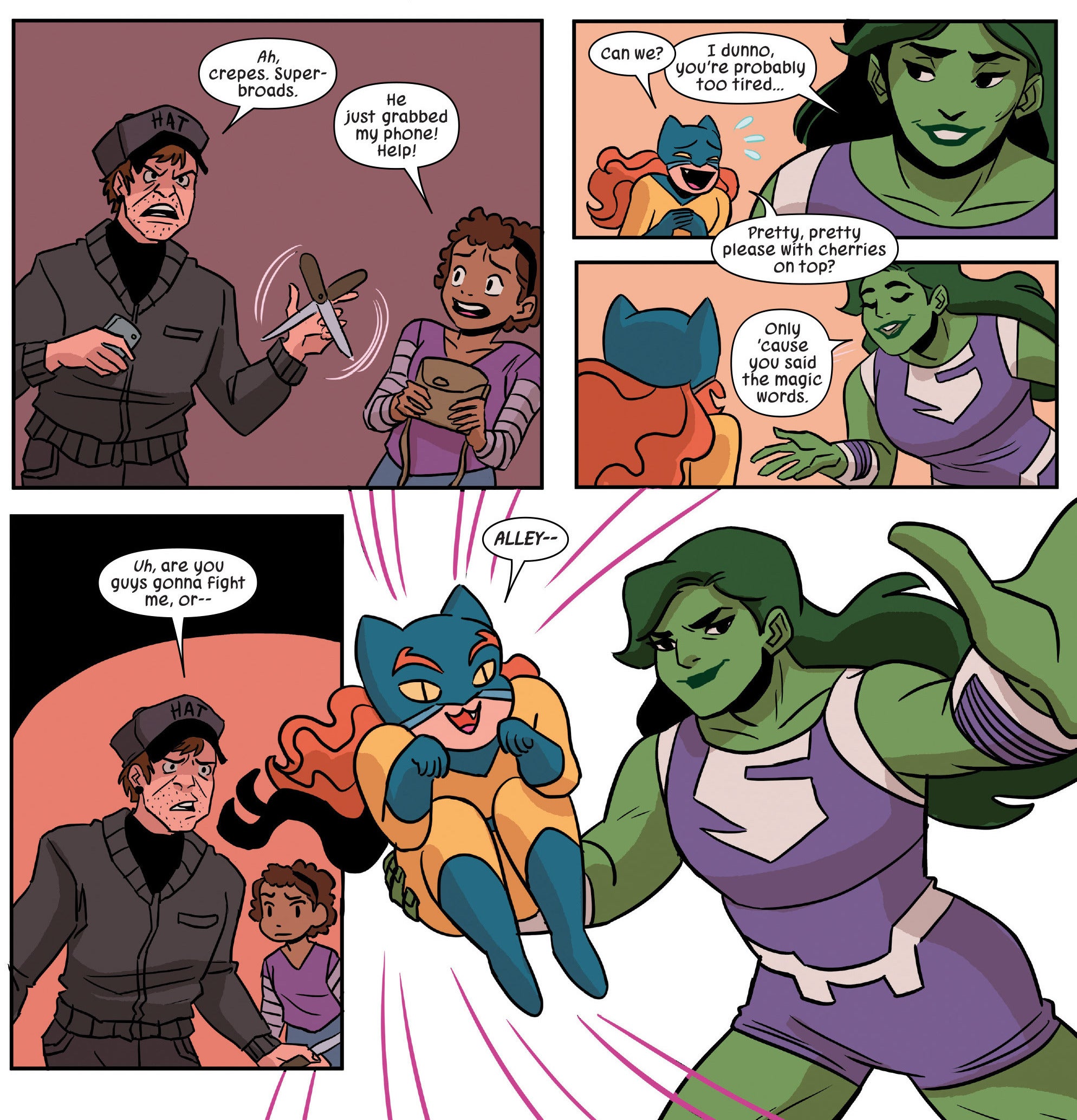 When Patsy falls, She-Hulk's there to hoist her up, and when She-Hulk's down in the dumps, Patsy pep-talks her back to maximum strength. There are moments between the two of them where you can feel the intimacy leaping off the page and their mutual respect and care for each other makes you feel that way about them. It's that intense bond between the two of them that made Patsy Walker's inclusion in Civil War II one of the event's best issues.

After a battle with Thanos leaves She-Hulk in a coma, Patsy's world is shattered and her fear for She-Hulk's life is ever-present throughout the rest of the series. 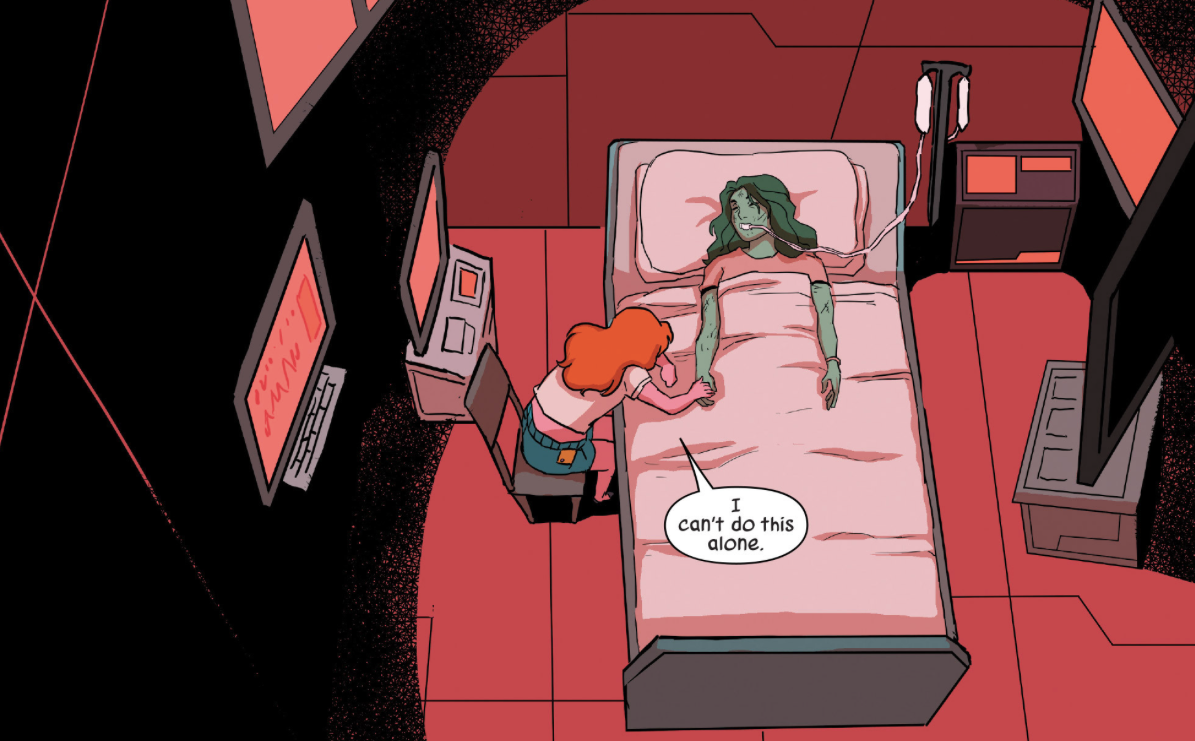 The burden of Patsy's dread never gets to the point of dragging down or chafing against its lighthearted humour, but it's a poignant reminder of how the book's solid storytelling delivers on its emotional lows just as powerfully as it does on its highs.

And that's where Patsy Walker ultimately ends — on a high, if familiar, note. Patsy's back on the ground recovering from a reality-warping magical flu and, all things considered, she's doing all right. Money's still sort of a concern and her adopted family of friends are her top priority, but you get the sense that everything's going to be alright. Because it is. 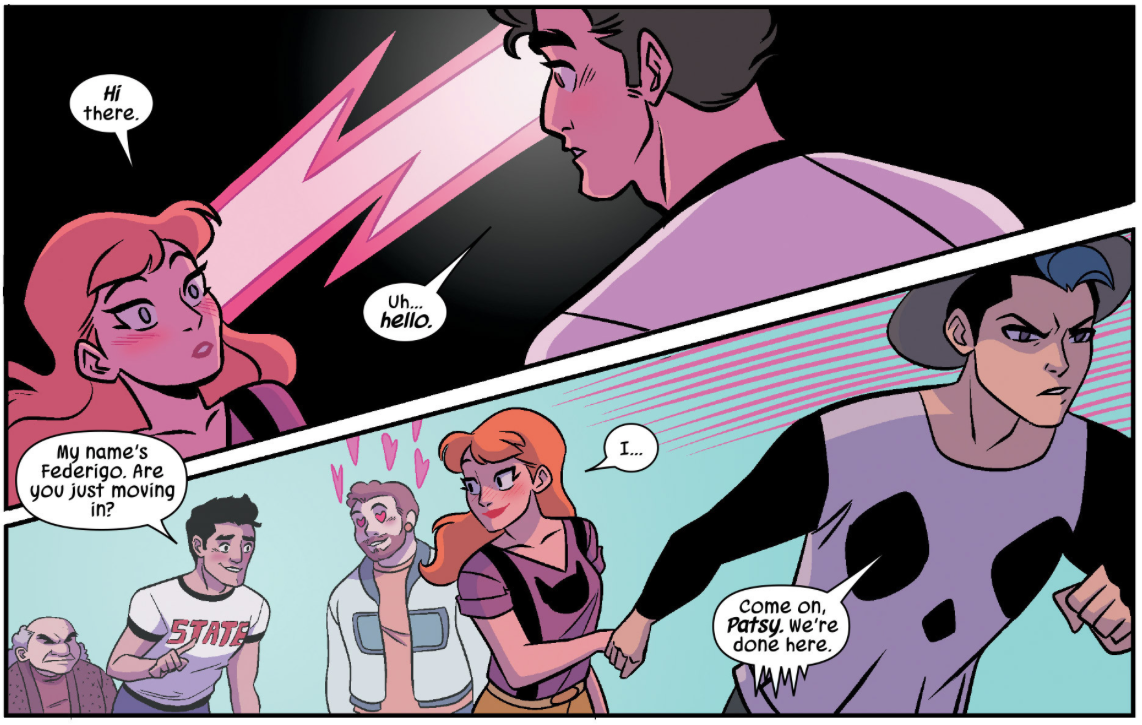 Oftentimes, when comics set out to tell stories that humanise superheroes who are off saving the universe, they get mired in drama that somehow manages to be both weirdly familiar but utterly unrelatable. When every story tries to be an epic tale about how a hero's greatest struggle, it becomes easy to lose sight of how a world as sprawling as Marvel's logically fits together.

On some level, Marvel understands the intrinsic appeal of these kinds of focused stories that are a touch off the traditional "mainstream" comics path. But like Mockingbird, Vision and Nighthawk, before it, Patsy Walker's coming to a premature end, seemingly because Marvel's less interested in putting out thoughtful indies in an industry addicted to formulaic blockbusters.

Patsy Walker isn't a small story, or a simple one, but rather one with a solid focus on a couple of months in one woman's life, during which some really important things happen around her. This is the storytelling that makes for characters that feel like real people, and those are the kinds of characters that comics need more of.