The Nintendo Switch Versus The PS4: A Japanese Sales Comparison

It’s still early for the Switch. But let’s see how the new Nintendo hardware holds up against the PS4’s first few weeks on sale in Japan.

As Kotaku pointed out late last month, Switch sales actually were on the up tick in March, nearly doubling during its fourth week out in Japan.

Via 2ch, here is how the Switch and PS4 sales compare during their first seven weeks on sale. (Note: The sales data is from Media Create. The character 週 means “week,” and the characters 完売 means “sold out.”) 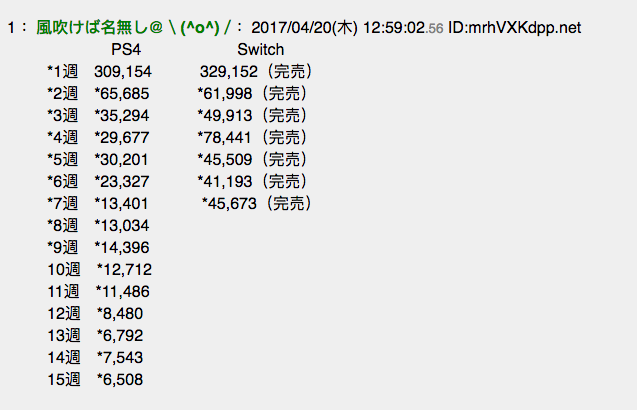 As you can see, Switch sales are holding steady, with each shipment apparently selling out. In comparison, the PS4 sales were declining during the same window.

It will be interesting to see where the Switch is fifteen weeks in. Remember, this is a marathon and not a sprint.