Everything From The Guardians Of The Galaxy Vol. 2 End Credits

Marvel movies are known for their teasing mid- and post-credits scenes, but with Guardians of the Galaxy Vol. 2, they up the ante with five of them after the conclusion of the movie. Some are jokes, but some have huge ramifications for future Marvel movies. Here’s how and why.

The Guardians have a lot of surprises in store in Vol. 2. All Images: Disney 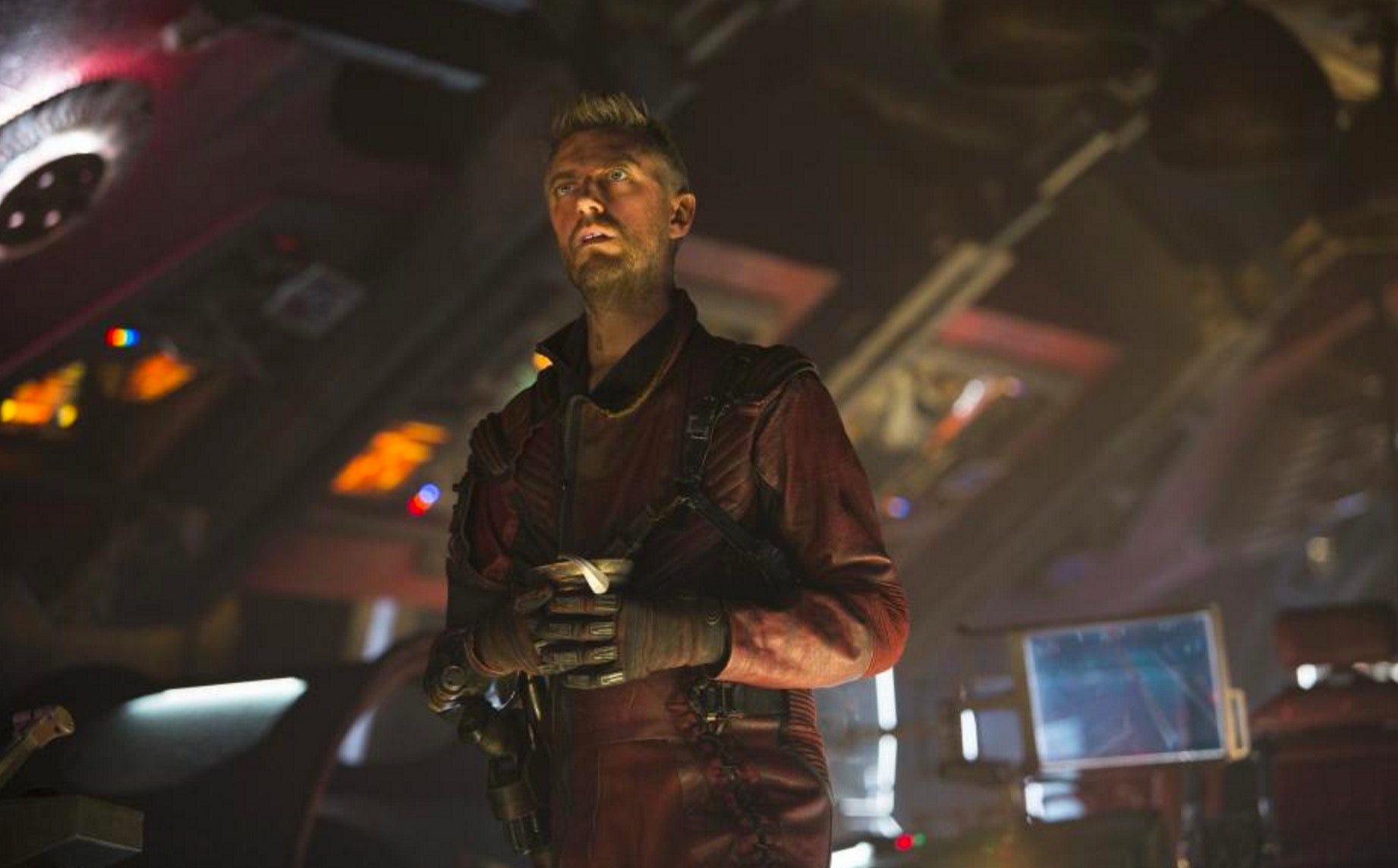 After helping the Guardians and losing his mentor Yondu, we see the Ravager Kraglin (Sean Gunn) on the Guardians’ ship, practicing with Yondu’s fin and arrow. He’s not very good at it but he does get the arrow moving … right into Drax’s throat.

Drax will be fine, don’t you worry, but obviously the implication here is that, like Mantis, Kraglin could join the team moving ahead. Does that mean he’ll be with them in Infinity War? More likely he’ll be part of Guardians of the Galaxy Vol. 3.

Various characters reunite at the funeral of Yondu, including three of the movie’s key cameos. We see Stakar — a.k.a. Starhawk in the comics — played by Sylvester Stallone, Ving Rhames as Charlie-27, Michelle Yeoh as Aleta Ogord, Krugar, and Mainframe (voiced by Miley Cyrus, if you can believe it).

“You will not see them again until Guardians 3 at the earliest,” Marvel Studios president Kevin Feige told io9. “One of James’ ideas was fleshing out the character of Yondu… and having the fun of tipping our hat to the original Guardians team from the comics. Which is all that is. Which, again, just gives James another set of tools to play with as he’s piecing together future stories.” 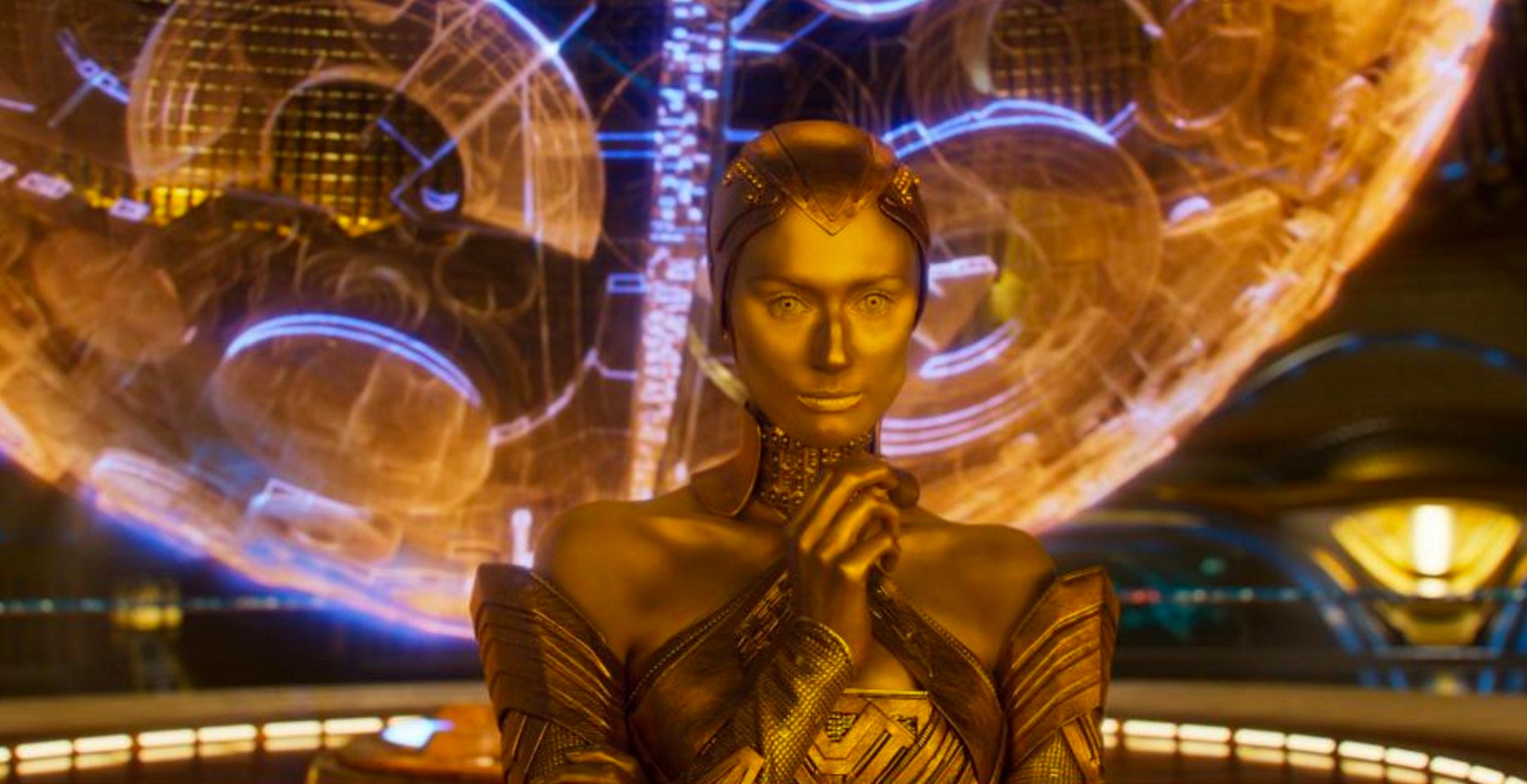 3) The Creation of Adam Warlock

Since the very first announcement of a Guardians of the Galaxy movie, fans have been asking when other famous cosmic Marvel characters would appear. We still don’t know about Nova, but now we know about the powerful Adam Warlock. The scene shows Sovereign leader Ayesha (seen above), still mad at her defeat at the hands of the Guardians, with a giant pod.

She claims her greatest creation is inside… and she’ll name him “Adam.” This is a clear call-out to Adam Warlock, whose origins in the comics as an entity called “Him” ties into Ayesha’s backstory there, too, where she was originally an artificially created superbeing like Adam.

“The first potential to feel those repercussions will not be until Vol. 3,” Feige told us. “Adam’s not a part of Infinity War, which, of course, he is in the comics, but he’s not in [the movie]. Our version of Infinity War is the culmination of all the stories we’ve told up to this point.

James had ideas to introduce Adam certainly in volume two, maybe even in part one. But part two for sure. Which were great, but the way the story was coming together, there just wasn’t time for that. But it became more for him to sort of ring that bell so that we can play with it at some point in the future.”

Guardians of the Galaxy Vol. 2 takes place only a few months after part one, so Groot is still very small. In this tag scene, however, we see that more time has passed and Groot is now an annoying teenager, with Star-Lord almost acting as his father. So we can expect Groot to be at least this size in Infinity War, or, more likely, having continued to grow back into his full, original size.

The final credits scene in Guardians of the Galaxy Vol. 2 features a callback to earlier in the movie. We once again see Stan Lee in space talking to several large-headed characters comics fans know as a powerful alien race called the Watchers.

Lee mentions his cameo as a delivery man in Captain America: Civil War, dropping the potential suggestion that Lee’s character who has cameoed in every Marvel movie, has always been the same person — or maybe even a Watcher himself.

It’s been a long-running fan joke/theory to tie the comics luminary’s various movie cameos together. James Gunn may have just made it canon.