Hands On With Destiny 2 On PC

destinydestiny 2editors picksfeatureimpressions
To sign up for our daily newsletter covering the latest news, features and reviews, head HERE. For a running feed of all our stories, follow us on Twitter HERE. Or you can bookmark the Kotaku Australia homepage to visit whenever you need a news fix.

If you were hoping for something dramatically different from Bungie’s much ballyhooed Destiny sequel, I regret to inform you that Destiny 2 is still Destiny. If you really like Destiny, of course, that’s not such terrible news.

This morning I headed over to the Jet Center in Los Angeles to attend Bungie and Activision’s big unveiling event for Destiny 2. The game’s director Luke Smith came out on stage to unveil the sequel with a couple of CGI videos and pre-rendered gameplay demos, which played at blunt-force volume on the massive screen behind him. Shortly after the presentation concluded, I got to actually play the game.

Here’s what I played, all on PC:

Here’s what I thought:

I’ve played hundreds of hours of Destiny on PS4 with a controller. I know it better than any video game I’ve ever played, and the controls have become second nature. The feel of the game at 30fps, also second nature. Because of that, playing on PC at 60fps with a mouse and keyboard felt wild to me. Aiming is completely different. Your weapon just handles differently on PC with a mouse and keyboard, and there’s much less kick.

My entire approach to movement was different — console controls rewarded levelling out your sights and strafing right and left, while the added precision of the mouse and keyboard changed how quickly I could zero in on my target. Side note: Scout Rifles are really fun with a mouse and keyboard.

The demo seemed well optimised on PC, running at what felt to me like at least a locked 60fps. I didn’t detect a single slowdown in the story mission, during the strike, or during PvP. I was also able to easily remap the controls, which was good, since some of the defaults were a little weird. 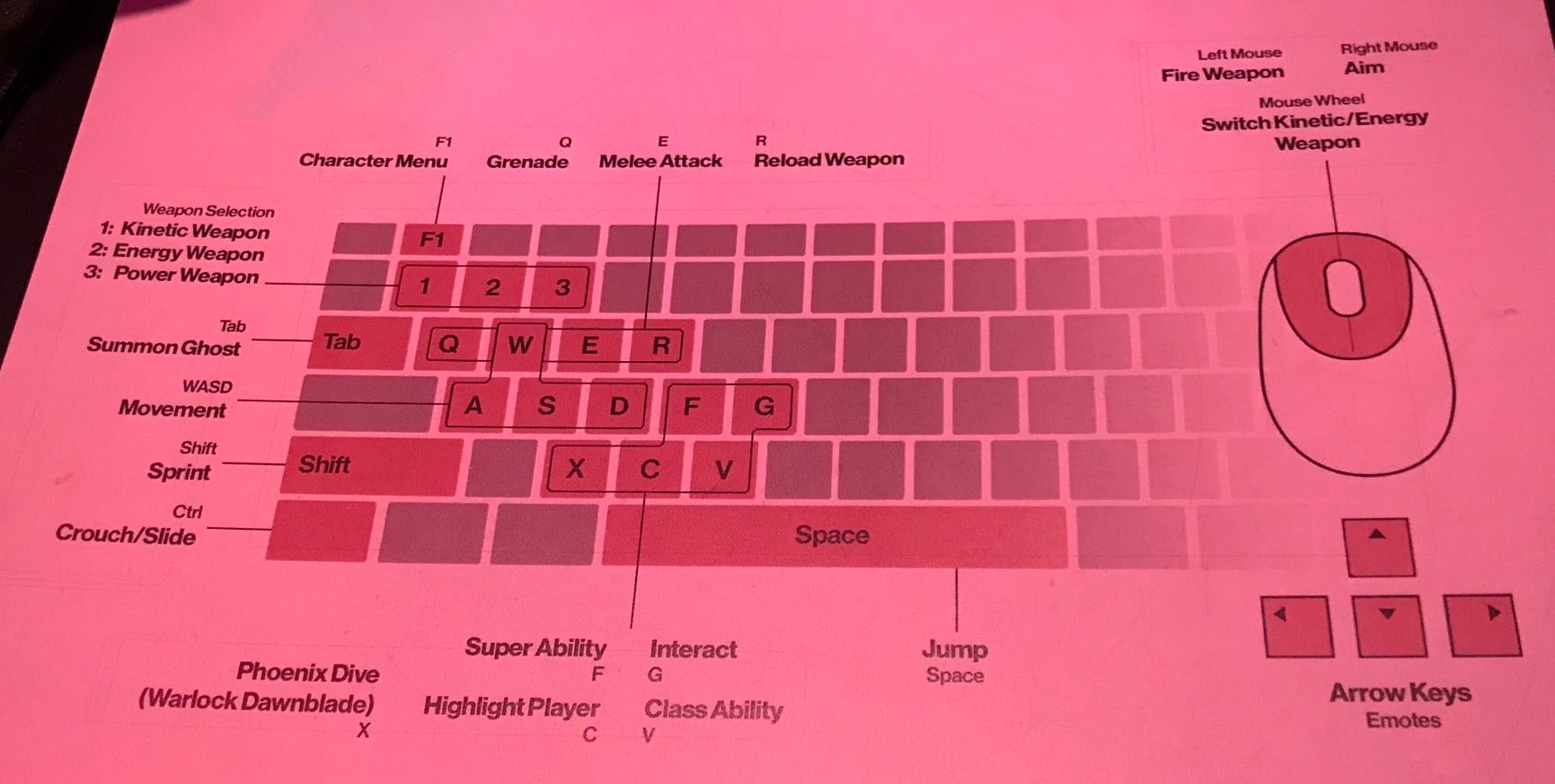 Above: The default mouse and keyboard controls, which were very easy to remap in the options menu.

From a design standpoint, everything I played could have been in a Destiny expansion. Watching it run on at the usual 30fps on PS4, it’s basically just more Destiny. Sure, the UI has been tweaked, and there are a few new abilities.

But generally speaking, this demo walks, talks, and quacks like Destiny. But while the game I was playing wasn’t much different from the Destiny I’ve sank so many hours into, the difference on PC really was dramatic. The PC version doesn’t have a firm release date, but once all three versions are out, it’s going to be tough to decide which version to stick with.

The first story mission feels like a juiced up Taken King.

The story mission I played felt a lot like the start of the Taken King expansion, though with higher stakes. Some Cabal jerks have come out of nowhere and attacked the Tower, and everything’s on fire. The mission has that familiar “run forward as things explode and scripted events play out” kind of feel. It’s definitely enjoyable to run across the Tower promenade and see it covered in rubble and flaming debris. Look, it’s those plants I used to jump through while I wanted for everyone to get ready to raid! They’re on fire. Bye, plants.

The mission was laced throughout with cinematic moments that, again, echo the feel of that first Taken King mission. The Titan Zavala was holding down the fort near where we used to get bounties, and called for for me to take cover in his bubble.

(I failed to do this, and died. It was an anticlimax.)

I fought some waves of enemies, then Ikora Rey turned up and nuked some Cabal dudes. I fought some more waves of enemies and Amanda Holliday came and picked me up. It was all slick, if familiar. You’re not exactly fighting alongside any of these characters — Zavala stands still like a robot and basically acts as a Titan bubble generator. Ikora appears and then leaves, all scripted. After Amanda picked me up, I landed on a ship and fought some more Cabal before wandering into a room occupied by the new big bad guy. I didn’t really see his face, and the demo ended. 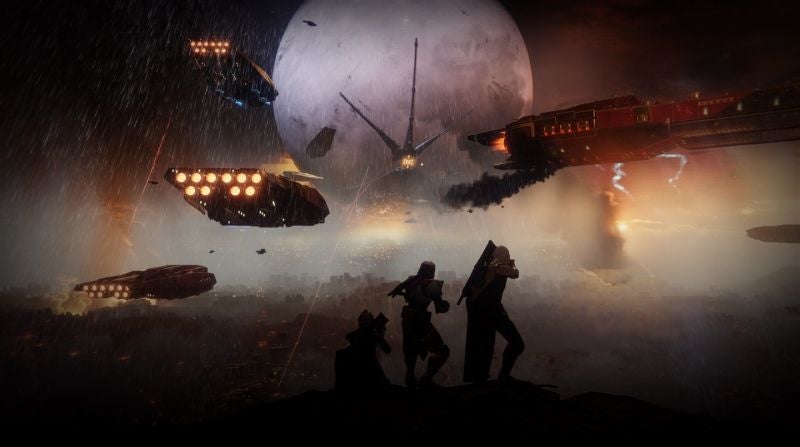 The new three-weapon system is interesting: Instead of the primary/special/heavy trio of Destiny 1, you now have slots for a kinetic gun, an energy gun, and a special gun. Both kinetic and energy guns can be what used to be known as primary weapons.

You can roll with a kinetic pulse rifle and an arc scout. Or a kinetic auto rifle, and a solar pulse. The upshot is that you go into battle with two primary-type weapons, but it also means that if you want a sniper rifle or a shotty, you can’t also have a rocket launcher or a grenade launcher.

I’m not sure how I feel about the new weapon system yet. I really liked seamlessly swapping between a hand cannon and a scout rifle, but didn’t like having to chose between a sniper rifle or a rocket launcher. A lot will depend on the variety of kinetic and energy weapons Bungie comes up with. The only guns I had were the usual scout, pulse, auto, and hand cannon. Those same familiar weapons, more than maybe anything else, really made it feel like I was playing the same game I’ve been playing for three years.

I played the new Warlock Dawnblade subclass in the story mission, which replaces Sunsinger as the Warlock’s solar subclass. Your abilities menu is laid out a bit differently, with super, grenade, jump, and general stats separated out into clusters. The layout seems like an improvement. The flaming sword super is pretty fun, and feels a lot like Titan hammers. Which is a good thing.

Each class now has a class ability that they will have regardless of subclass. Warlocks can drop a ward on the ground that can increase your stats or heal you. It was nice to have, though I kept forgetting to use it. Old Destiny habits die hard, and new Destiny habits are hard to acquire.

Stray thoughts on the story mission:

The new crucible mode plays like an expanded Salvage.

Not to keep harping on the PC thing, but PvP was where Destiny 2 felt most dramatically different with a mouse and keyboard. Lining up headshots and aiming while jumping are very different propositions. Competitive play brings all of a game’s mechanics into sharp relief, and it’s definitely where I felt the PC difference the most. 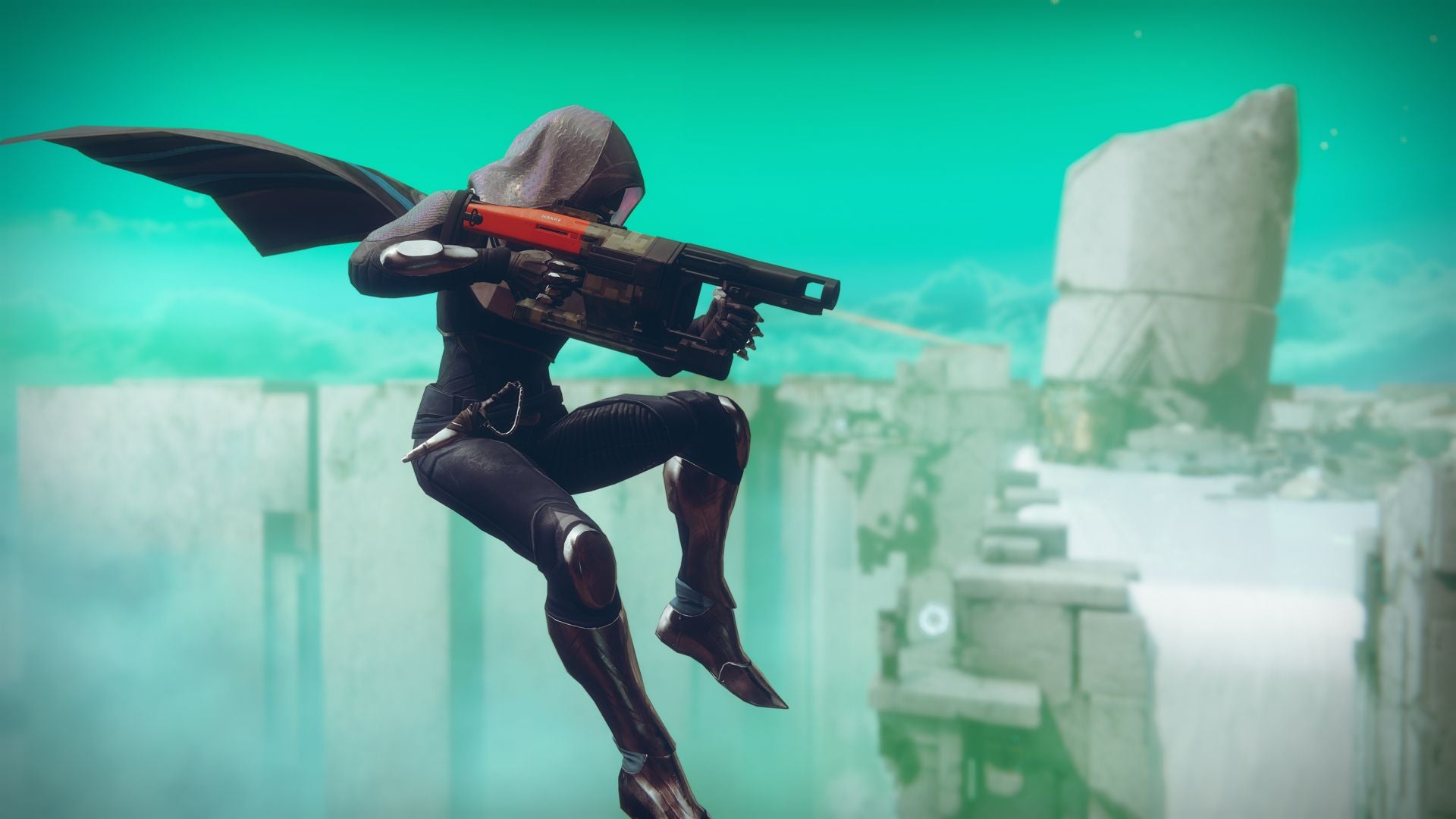 The Crucible game mode I played was called Countdown. Two teams of four take turns between activating and defending bombs or assaulting and disarming them. There are two possible bomb sites each round. You can revive your teammates, so the whole thing feels like a slightly tweaked Salvage mode. I’ve never loved Salvage, but just at a first glance, Countdown seemed more fun.

I played as a Hunter this time around, with gunslinger as the only available subclass. It felt very familiar — double jump, tripmines, and the same super as ever. The hunter’s class ability is a shadestep-like dodge, but I wasn’t close to familiar enough with how it worked to get much mileage out of it. Nice to have that type of move available across all Hunter subclasses, though.

The new strike was the best thing I played.

The strike, called “The Inverted Spire,” took place on one of the new locations, the Vex-ified planet Nessus. It was very much a Destiny strike — go forward toward the grey dot, fight enemies, get past a few different challenges, finish on a boss.

The strike was well designed, with a lot of nifty surprises and cool fights. It had some leaping between levitating platforms, and several man-cannons that fired us across vast chasms.

My favourite bit took place in the middle of a massive drilling operation. We had to make our way across a huge hole, dodging massive swinging drill arms as they swung our way. A hit from the drill would kill me instantly, so I had to keep my eyes up and continually relocate to keep from dying. All the while, cabal and vex enemies were shooting at me and each other. It was the best sort of chaos, and the only place where my fireteam wiped. 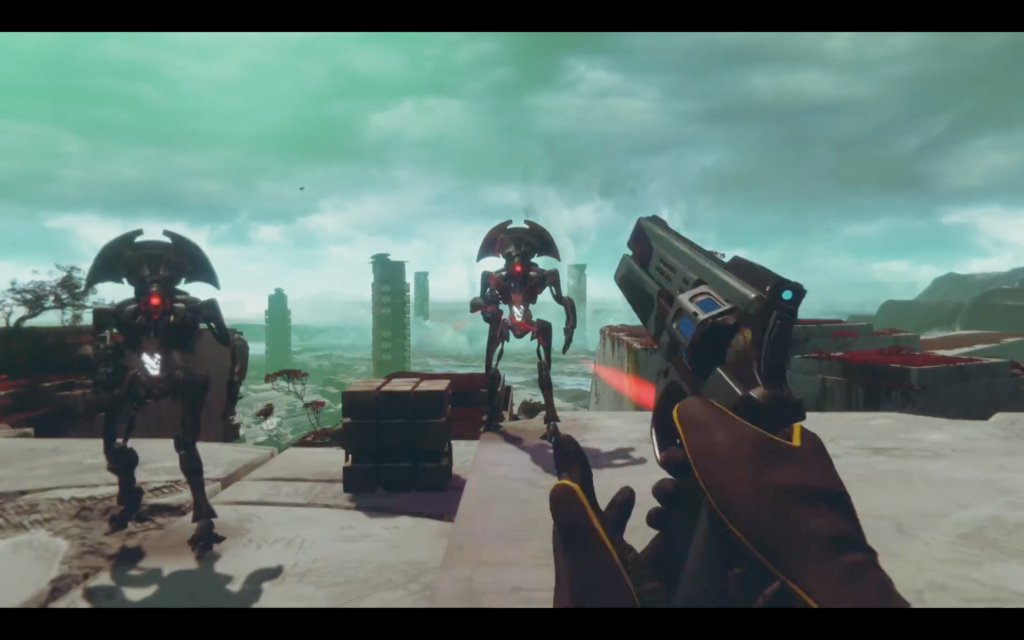 The final boss fight was a multi-stage kind of deal, and also a lot of fun. A huge Vex minotaur (maybe a Chronovore?) teleported in and began stomping around and shooting at us as Goblins and Harpies teleported in. Standard stuff, until he stomped extra hard and the floor vanished. Down we fell, hundreds of yards to a new circular arena. In came more enemies, and the boss started circling around us. Once again he stomped out the floor, and we dropped into a third arena for the final showdown. It was a great way to cap off an altogether satisfying strike.

The Inverted Spire was the best thing I played at the preview event, but like everything else it felt familiar. These were still the same Vex, with void shields and exposed juiceboxes. These were also basically the same Cabal, with their perfectly poppable heads and their blooby arms just off to the side of their shields. The boss was still just a big-arse Vex guy surrounded by a bunch of smaller Vex guys. I saw a couple different enemy types, including a Cabal with a larger emplaced shield and another wielding what looked a giant meat cleaver. But on the whole, The Inverted Spire could’ve been a Destiny 1 strike.

I’ve only seen a sliver of Destiny 2. The preview build I played was missing a lot of features that will doubtless be in the final game. I couldn’t closely examine my guns, or access any pages other than the main inventory page, let alone visit the new town vendors or explore any of the new, allegedly sprawling patrol areas.

Based on what I played, Destiny 2 seems more like a reset than a sequel. Reset the gear, reset the balance, reset our characters and our levels. Clear the table, smooth out the cloth, and start fresh. That may not be such a bad thing, particularly given that Bungie has doubtless gotten a lot better at managing this sort of game since they launched Destiny back in 2014. After three years of accumulated cruft, Destiny was ready for a clean start. I saw elements of that clean start in everything I played today, even if I didn’t see anything all that new.