On one hand, Injustice 2 delivers a funhouse-mirror take on DC Comics’ biggest characters, exploring the characters in intriguingly divergent ways. On the other hand, because it’s a fighting game, all the story needs to do is keep generating reasons for former Justice Leaguers to punch each other across the world. Injustice 2 gets to have its cake and eat it, too, and makes you want to keep on gorging right along alongside it.

Ever since I started playing Injustice 2 last week, I’ve been asking myself why I’m enjoying it so much more than the DC Extended Universe movies. Leaving aside the core difference in the two mediums — movies that you watch and games that you control — I think part of the enjoyment gap comes from the fact that the games’ writing deftly draws on publishing history. In terms of plot and characterisation, the Injustice games (and comics) are as dark, if not more so, as Man of Steel and Batman vs. Superman. But the games sprinkle in lots of fun quips and references in the midst of Superman taking over the world, Batman locking him up, and Brainiac invading the Earth.

One of the reasons I’ve committed to Green Arrow as my main character is because I love hearing him jaw at his opponents. Also, his constant mentions of his wife Black Canary and how much of a badarse she is serve as reminders that the folks behind this game get the source material. The same goes for most of the other writing that goes into the game, even when it’s doing something that I can’t co-sign. This iteration of Superman is an incredible jerk, but I enjoy how his actions have created a universe where the ripple effect of jerkitude makes characters react in surprising ways. Here’s a quick rundown of some elements that have made me fall in love with Injustice 2.

Early on in a flashback sequence, Batman and Damian, in his junior partner role as Robin, have a tense face-to-face with Superman. Damian decides to join Superman’s faction because he thinks that Bruce should have been killing some of his archfoes all along. There are several reasons it makes sense that Damien goes to the dark side in Injustice 2. He’s the son of Talia Al Ghul and was raised as an assassin. Killing isn’t as abhorrent to him. This beat also serves a meta-nod to the argument that Batman would be cooler/more effective if he killed. This time, however, the sneering comes from his own son and the ensuing betrayal feels much more screwed-up as a result.

Injustice 2 is a fighting game, and that means trash-talking is a key ingredient of what’s on offer. Whether you’re playing in story mode or against human/AI opponents, the heroes and villains of this universe all spit barbs that make players chuckle. Take this compilation of intro dialogue for example:

And I straight-up winced when I read this Poison Ivy line directed at Cyborg. 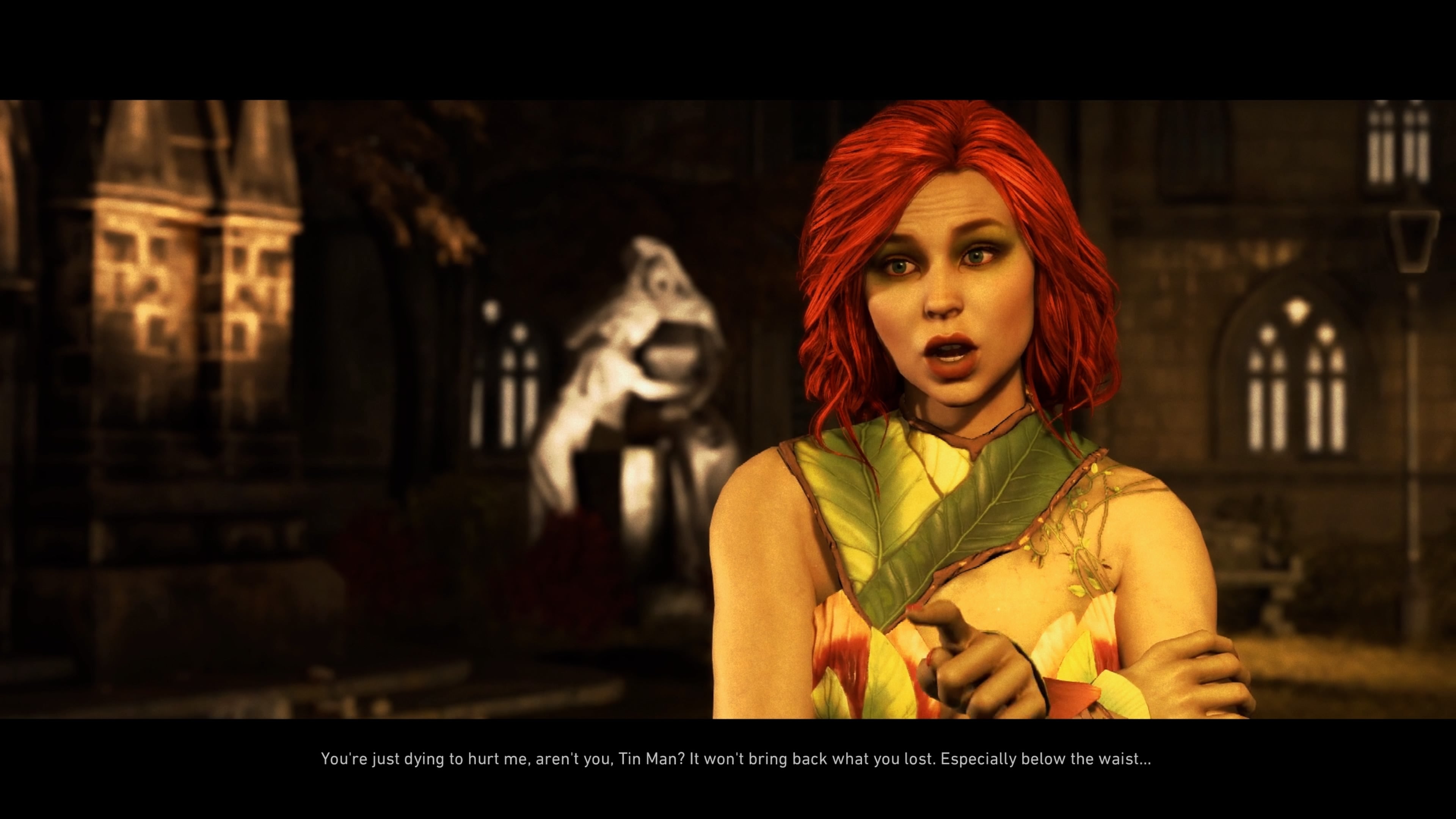 If you’re familiar with the minutiae of DC Comics’ continuity, there are loads of cute allusions to the decades-long histories attached to these characters. For example, one of Green Arrow’s special moves is called More Fun, after the Golden Age anthology series where he appeared.

Similar references pop up in the alternate looks and gear names, too. Some of it is just weird, like the nomenclature system for gear. The naming system combines odd, “bag of holding” RPG syntax with techno-jargon and lore nods, creating a goldmine for guffaws. Look at these things: 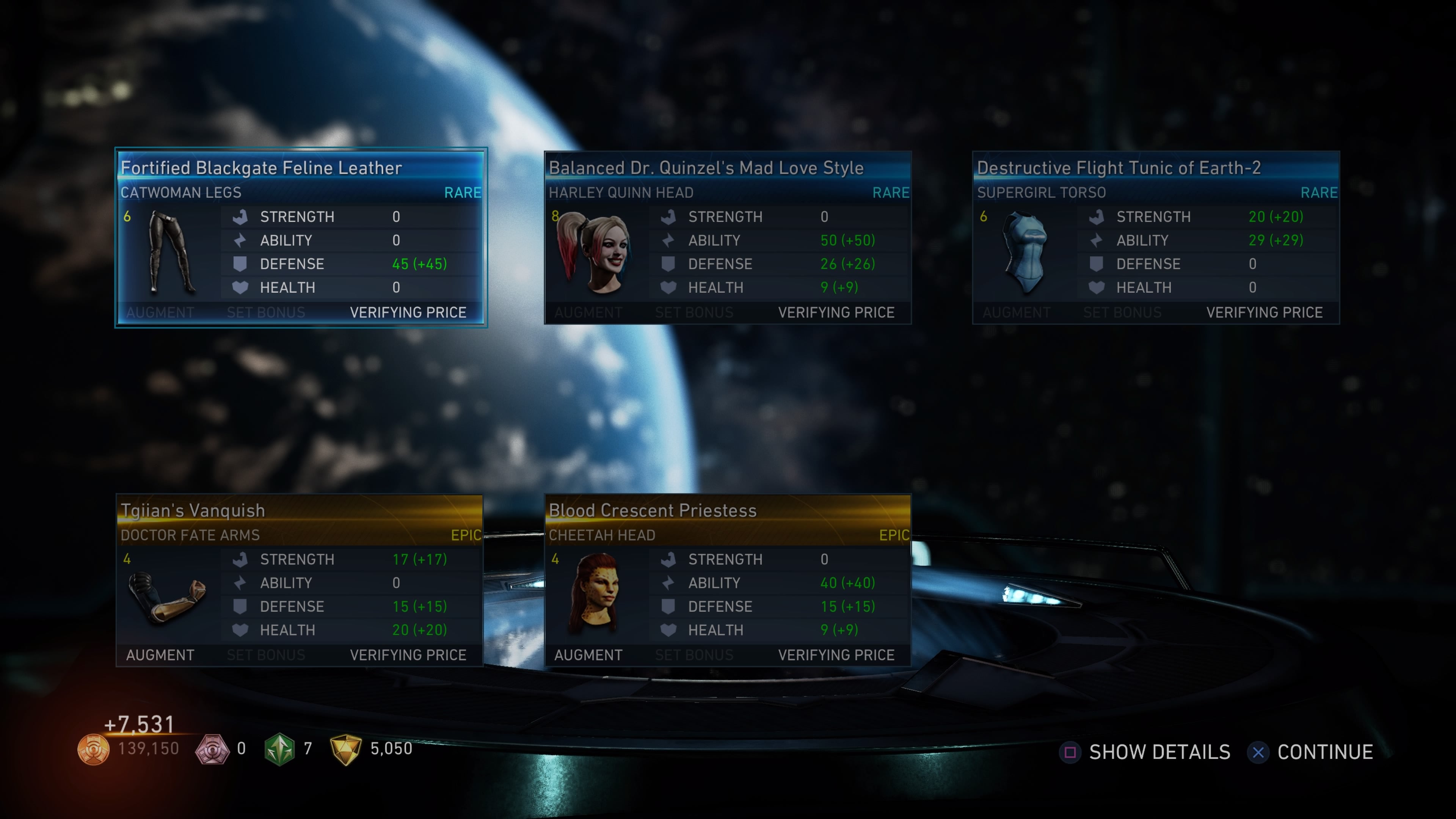 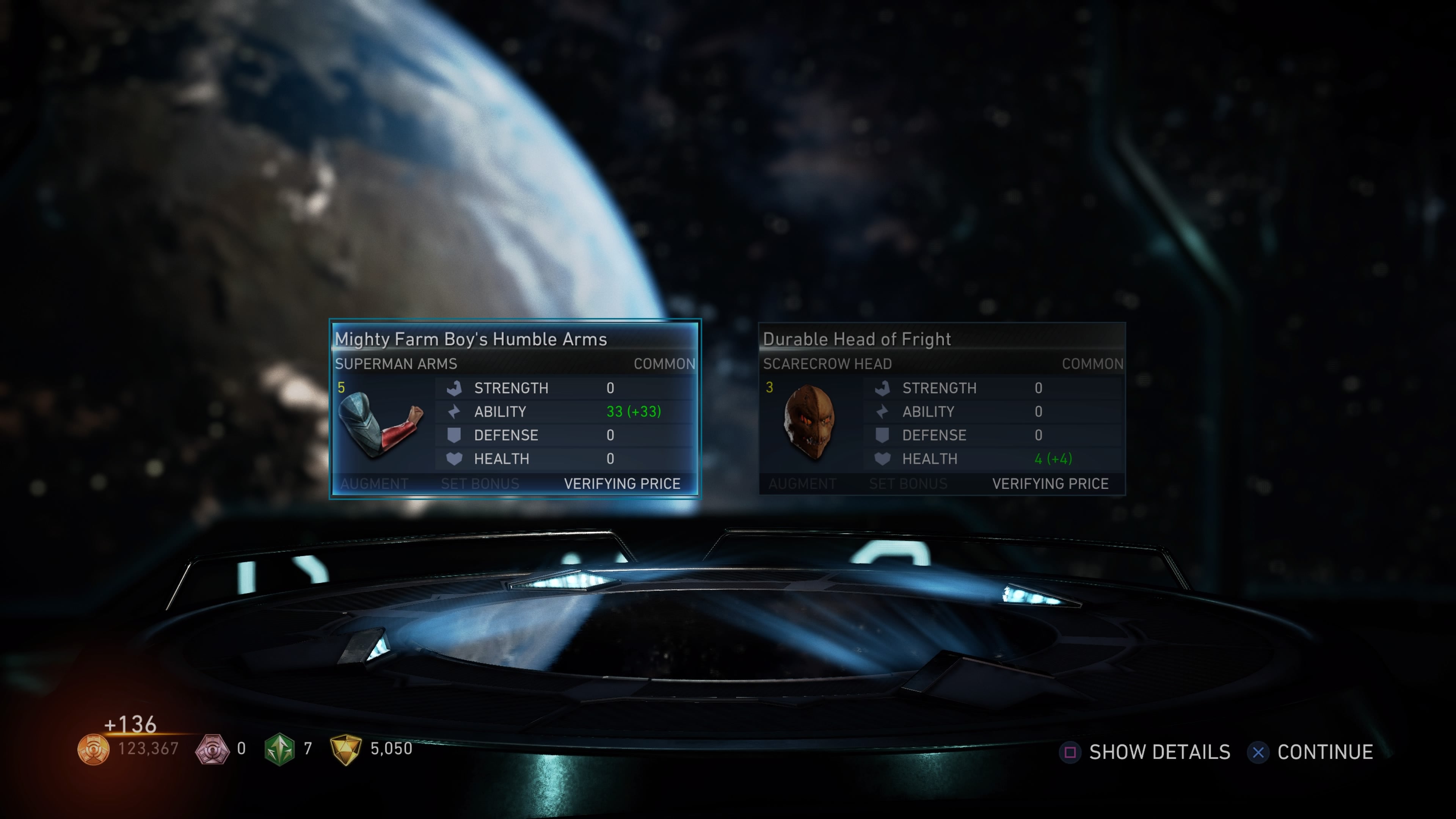 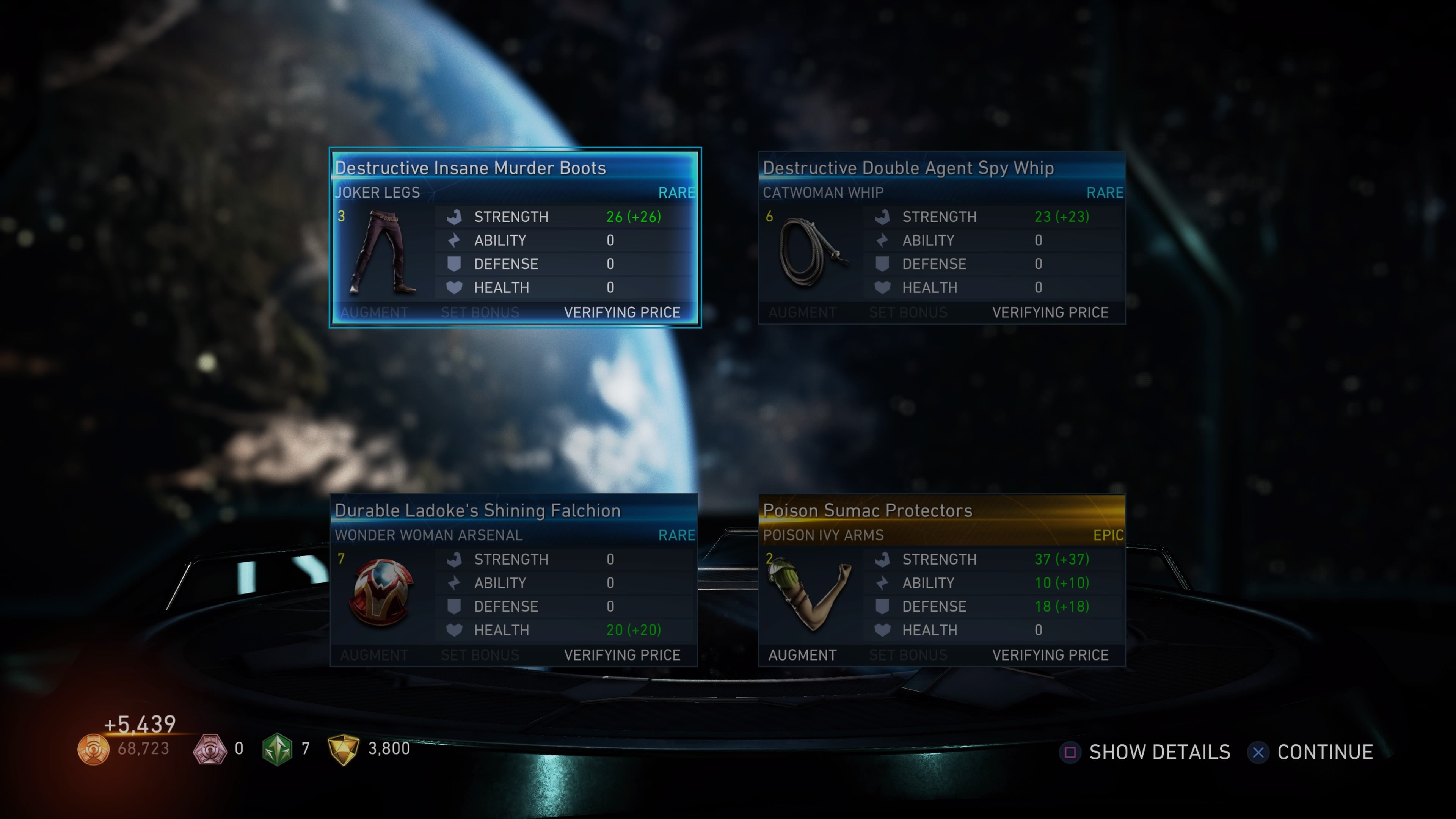 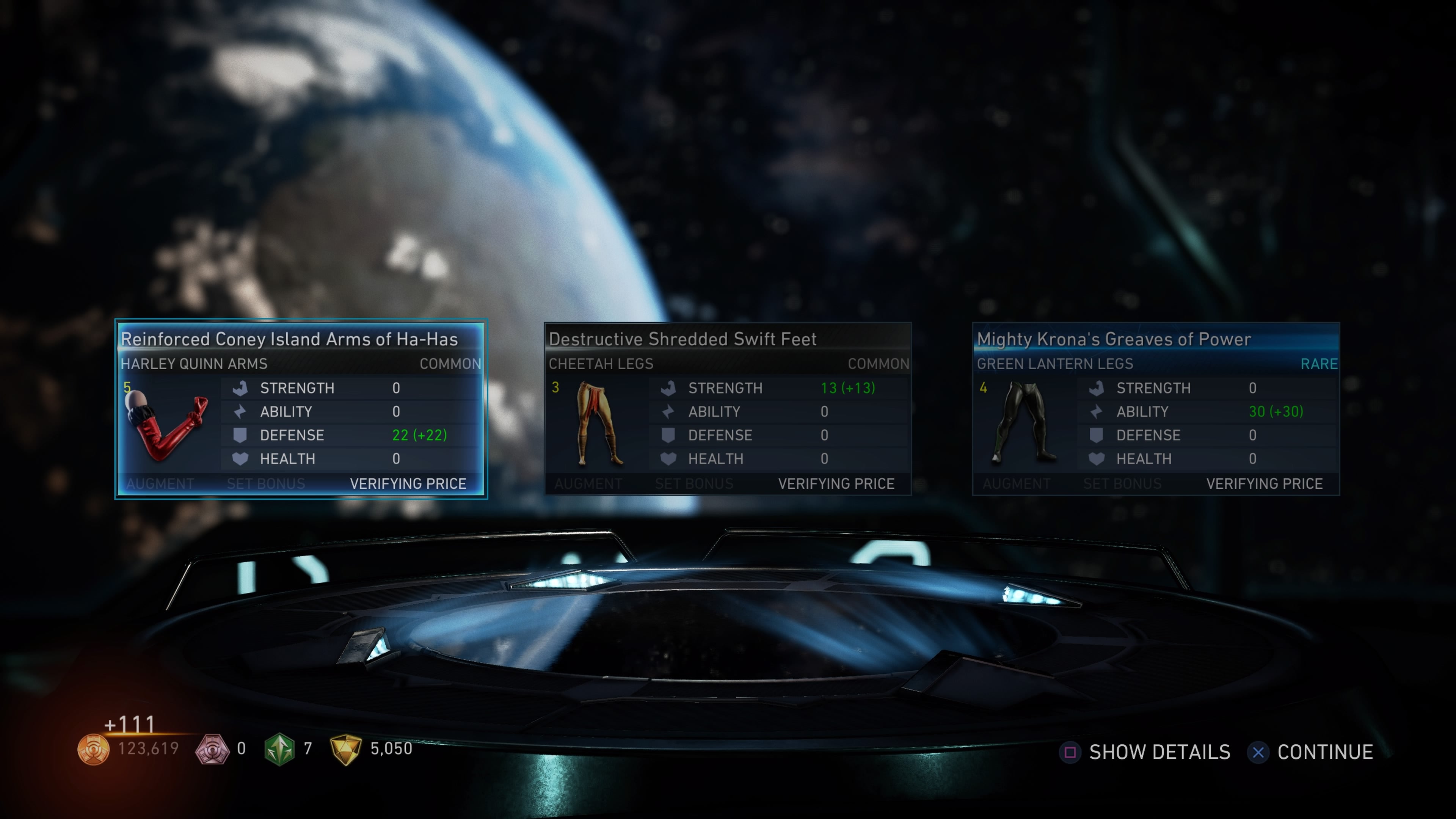 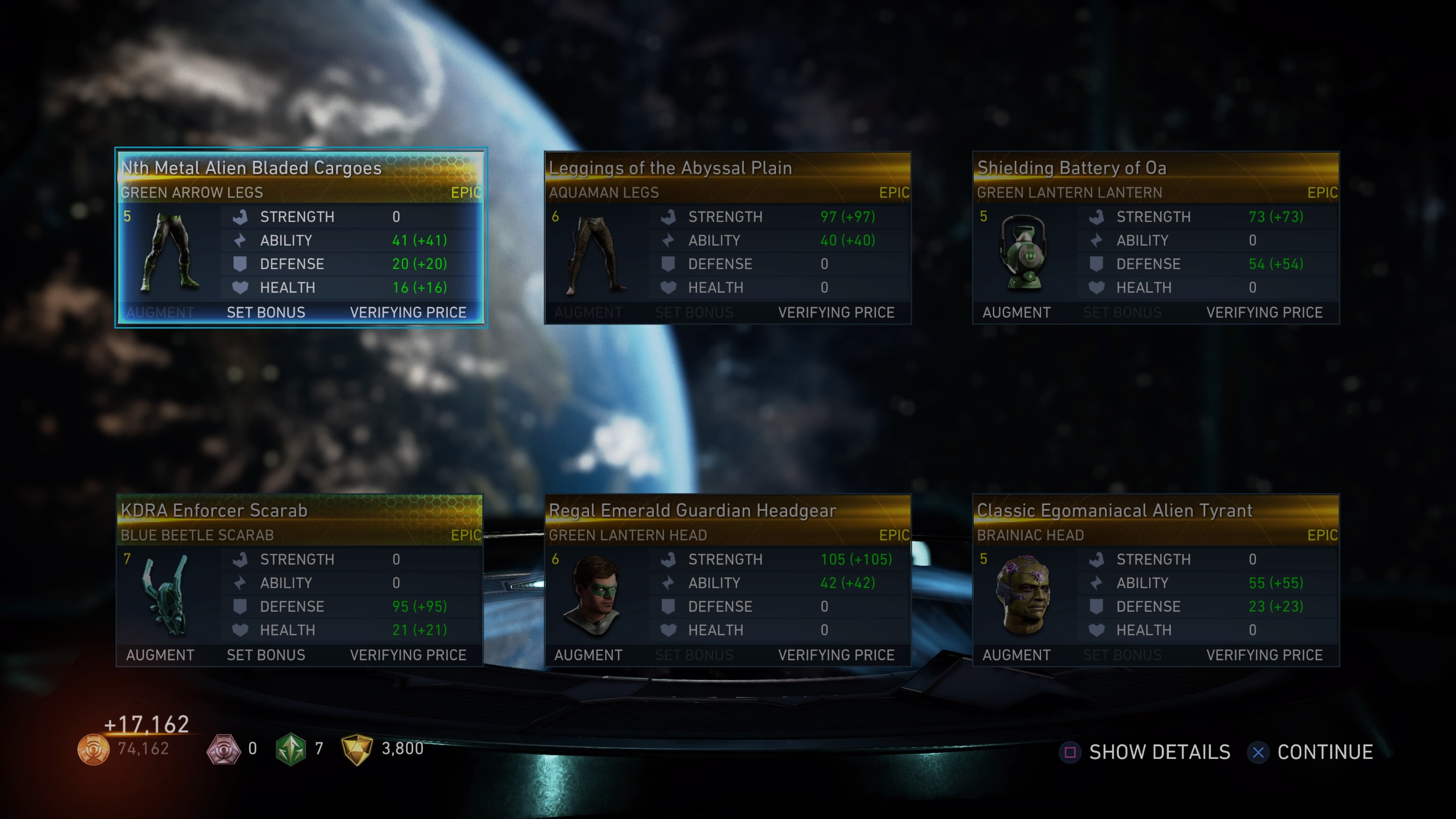 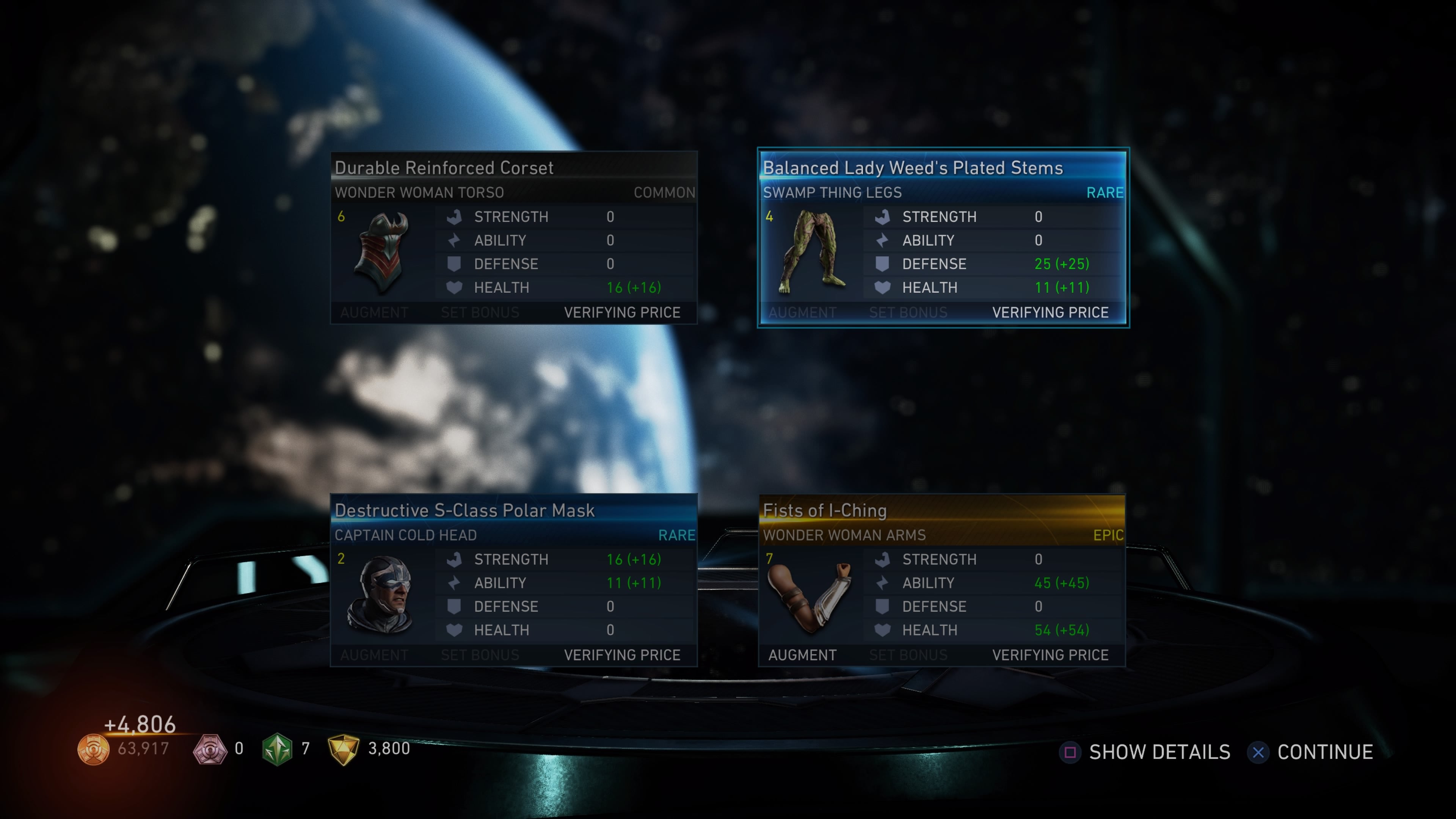 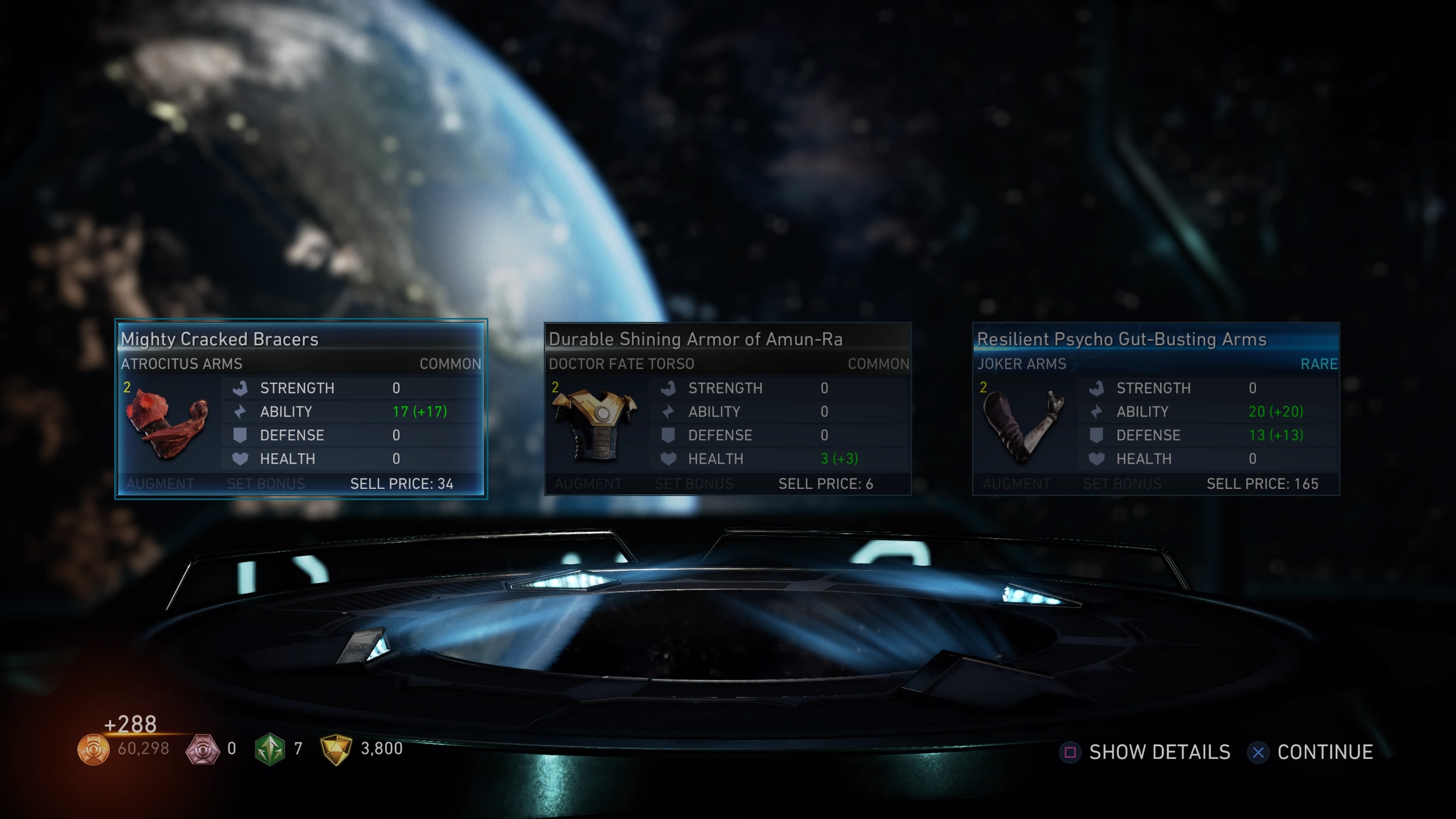 Despite the Michelin star-rating word-salad going on here, I know what they are and that kind of frightens me. Speaking of gear, I’ve always been a sucker for redesigns of iconic superhero looks, and Injustice 2 serves up an alt-costume extravaganza. A little smile of admiration grows on my face whenever an AI opponent rolls up in a cool variant look, like Pamela Isley sporting autumn colours below.

At the end of Injustice 2‘s Story Mode, you’re forced to finish up from either Batman or Superman’s point of view. Playing through a set number of fights opens up the option to play through with the other character. I defaulted with Batman and went back later to see what happens if Kal-El wins. Man, it is dark (skip to 7m 10s, and beware of massive spoilers):

If an Injustice sequel winds up being the inevitability that it seems to be, this darker ending feels like a better jumping off point as far as story potential goes.