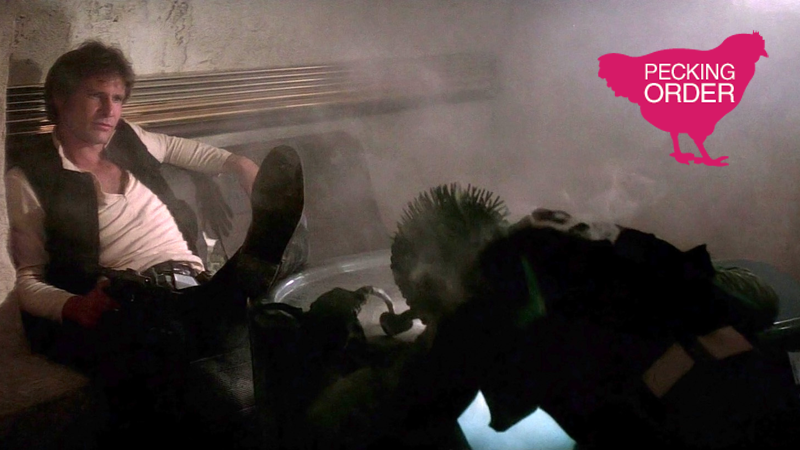 With a new Star Wars movie out, the first in ten years, now is as good a time as any to see how all the films stack up. That's right, it's time to put the Star Wars movies through the Pecking Order paces — much like with have with everything from the Final Fantasy games to, more recently, the Fallout ones.

As with any Pecking Order, this is somebody's opinion! My opinion, specifically. If you have a different order, fantastic. Cool, let's begin.

1. Episode V: The Empire Strikes Back

The default number one choice, but for good reason. Try to put yourself in the headspace of a person seeing it for the first time back in 1980, three years after you saw A New Hope. "Luke, I am your father." The revelation was mind-melting. I saw the 1981 theatrical re-release as a small child and the movie's dark edge made quite an impression, as did the settings, which were different from anything in the previous film.

While the payoff does rely heavily on the previous film's groundwork, Empire would be an amazing movie as a standalone. It works as a movie, not simply as a Star Wars one.

Recently, it's become somewhat in vogue to credit everyone but George Lucas for the good Star Wars films, to the point of overstating what others brought to the table and understating Lucas's contributions. That being said, the smartest thing Lucas did was to turn over the reigns to another director, and to hire smart writers to punch up the dialogue — allowing them to do what they did best and him to focus on being a creative producer and overseeing the entire production.

Lucas has been at his best when he is collaborating, whether that's with Ralph McQuarrie, Irvin Kershner, Lawrence Kasdan, or the film's actors. For all the 20th century hype on auteurism and a singular filmmaker's vision, film is a collaborative medium. Few films prove that better than The Empire Strikes Back.

The story goes that George Lucas wasn't able to secure the rights to Flash Gordon, so he did his version. He cribbed the now iconic opening crawl, but added a healthy dose of Akira Kurosawa, such as the director's preference to transition scenes with wipes, and taking inspiration from the 1958 film Hidden Fortress as well as Japanese kimono and armour.

Lucas hasn't directed that many feature films over the years, and A New Hope is still his best work. It wasn't an easy film for him to make. While this is the film that launched one of the biggest franchises ever, what really sticks out about it these days isn't just the trench run sequence or Obi-Wan's duel with Darth Vader, it's how many of the scenes linger and are deliberately paced. Modern movies move at a quick clip, but A New Hope takes its time. Characters sit around and talk about their hopes and dreams in a way that you don't see much these days in mass entertainment Hollywood films. The movie is anything but dull, mind you. But its deliberate pacing sets it apart from the modern blockbusters it helped inspire.

There is much to like about The Force Awakens — most obviously, that amid intense pressure, the filmmakers delivered an entertaining Star Wars picture. It's difficult to make a good movie — any movie — so the odds were stacked against the filmmakers. The fact that, amid all the pressures and lofty expectations, they pulled it off is quite an impressive feat.

But for me, what puts this movie so high on the list is that while it's a terrific Star Wars movie, it also completely flips what we think of as "Star Wars" on its head. We have the Star Wars characters you know and love (Han, Leia, Chewie and so on), but the new ones are quite different. Finn, for example, isn't entirely heroic. In many scenes, he's cowardly. In other scenes, he's selfish. He's one of the most human characters I've ever seen in a Star Wars movie, and John Boyega does a brilliant job of bringing him to life in a compassionate way.

The other new characters — Daisy Ridley's Rey and Adam Driver's Kylo Ren — are also fascinating. Rey fits more within the type of Star Wars characters we are familiar with: She's tough, kick-arse and heroic. However, the character plays a nice foil to Luke Skywalker: While Luke couldn't wait to get off of Tatooine, Rey feels compelled to stay on Jakku. Kylo Ren looks like the type of evil Star Wars character we are now familiar with (there's a hood and a mask), but he's brash and bratty, throwing fits that send Stormtroopers running. Meanwhile, he's a dark jedi tempted by the light; an inversion of the temptation Luke so famously faced in the original trilogy.

The movie also has a self-aware quality that sometimes works (such as when Poe mocks Kylo Ren for his mask) and sometimes doesn't (the numerous recycled Star Wars lines and scenes). This is a movie that aims to please. It wants you to like it. And I do.

4. Episode VI: Return of the Jedi

Another difficult one. I talked to my colleague Evan Narcisse about this, and he argued that because Return of the Jedi is payoff and culmination, it should be higher than The Force Awakens. Honestly, The Force Awakens just edges it out.

I like how the film opens. I love the early set pieces, and I like how it seems like Luke really could join the dark side. The showdown between Darth Vader and Luke is satisfying. There are also lots of things that I've grown to like less over the years. Do I hate the Ewoks? No. Did I like them better when I was six? Yes.

My absolute favourite thing about Return of the Jedi was and remains Lando Calrissian. It's his fault that everything went pear-shaped in The Empire Strikes Back. He seems aware of that, which is why he returns in Jedi to help get Han Solo back and fly the Millenium Falcon. He's there to set things right. Part of me has always wished the whole movie was told from his point of view.

Originally, the film was going to be called Revenge of the Jedi, but as the story goes, Lucas changed the title because Jedi don't do revenge. They return. This is the same line of thinking that led to the "Greedo shot first" re-edit (because Han Solo is a hero and heroes don't shoot first). To me, it marks the start of the Bad George Lucas Era.

5. Episode III: Revenge of the Sith

For all the (deserved) complaints about George Lucas' newer Star Wars movies, Revenge of the Sith is OK! Corny dialogue aside, it's easily the best of film of the prequels. How's that for a backhanded compliment?

This is still a weird movie. One of the main bad guys is a cyborg with a terrible cough. That's not necessarily a bad thing, and I've always respected how Lucas goes out of his way to change things up with each film. Sometimes, though, he's changing things for the worse.

It's got some big space battles and a neat lava showdown, but at the end of the movie, I was left wondering: This? We've been building to this? We never saw the transformation that was promised, we only watched Anakin go from a wooden child actor to a rather mopey adult.

When I saw Revenge of the Sith, I kept thinking about how artfully Michael Corleone's transformation was handled in The Godfather. Lucas wasn't able to pull off Anakin's change with nearly the same degree of skill. There's no conviction. It's all artifice. Anakin becomes bad because he's supposed to become Darth Vader. The journey was supposed to be compelling, but it wasn't. Forget Jar-Jar, the Midi-chlorians, Clone Troopers killing Jedi and all that other crap, this is why ultimately why the entire Episode I to III trilogy, including Revenge of the Sith, was unsatisfying.

6. Episode II: Attack of the Clones

Dull, dull, dull. There were some bright spots — namely the action scenes, which were far more inspired than any of the dialogue. I do love the shades of Raiders of the Lost Ark during Obi-Wan's fight with Jango Fett.

7. Episode I: The Phantom Menace

Well. Where to begin? This is one joyless, flat movie. The acting is terrible, Jar-Jar is terrible, the dialogue is bad and the ending is awful. From start to finish, The Phantom Menace alternates from disaster to disappointment. That being said, the movie's soundtrack is excellent. So are some of the fights. Make that, one of the fights.

I remember right before I saw the movie, an art major friend of mine said, "Oh, you'll really like the symbolism." Not only was that friend wrong, he was, I'm assuming, drunk. The religious symbolism in this movie is heavy-handed and bland.

The Phantom Menace probably wasn't specifically designed to irritate Star Wars fans (the Force is Midi-chlorians? What?) but it managed to do so from start to finish.