Prey’s Final Act Is A Mess 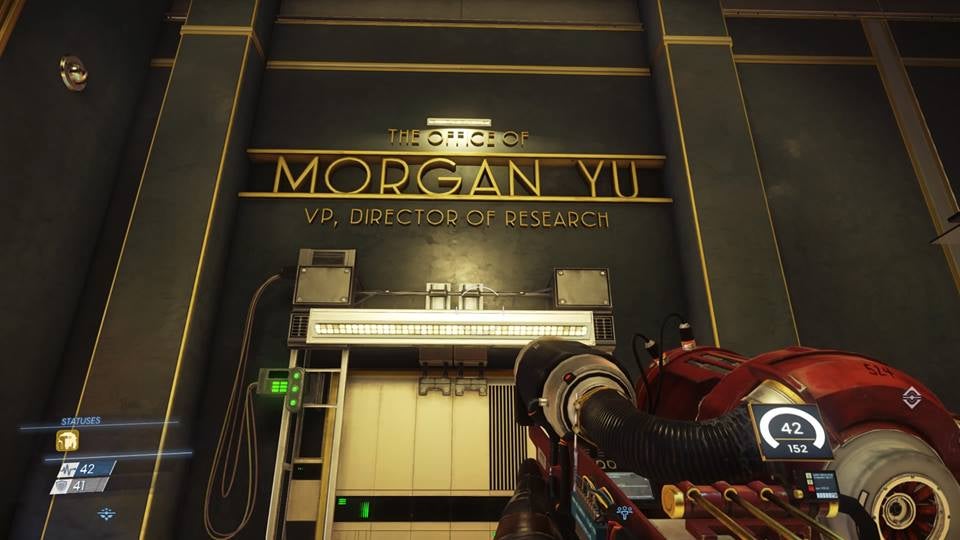 If you are playing Prey, the new immersive sim from Arkane Studios, here is a recommendation: quit once you’ve reached Alex’s office for the first time. Just stop playing. It gets way, way worse.

For its first three quarters, Prey is a fantastic game. Creepy, foreboding and darkly funny, the game rewards slow playthroughs and lets you peek into the lives of some fascinating characters. Then it all goes to shit.

Once you reach Alex’s office, following a long, meandering journey through various sectors of the space station Talos-1, you discover a video message from your brother. He asks you to help him save the station. Then comes a new plot twist: a mercenary named Commander Dahl has just docked on Talos-1 and sent an army of security robots to wipe you out.

Immediately, you’re accosted by four of these bots. They look just like the engineering, medical, and security robots you’ve previously encountered, except they shoot lasers and have way more health. They are, to put it gently, miserable fucks.

Like I said before, now would be a good time to stop playing.

For the next three to four hours, you zip around Talos-1, trying to dodge endless waves of these security bots (who won’t stop spawning) in addition to hordes of Typhon aliens (who grew even more powerful while you were messing around in the Arboretum). Whereas before Prey let you explore slowly and meticulously, now the only way to survive is to run from goal to goal, gobbling medkits and trying not to get stomped.

If you turned off mission objectives before, now’s the time to put them back on. You are no longer rewarded for taking your time.

It’s at this point that Prey becomes an entirely different game, one that ditches cerebral satisfaction and just makes you run around like a terrified chicken with its head cut off.

Unless you’ve beefed up all of your Typhon powers — at the risk of getting chased by those nasty Nightmares — you’ll have a hard time getting through this act of the game without just sprinting as quickly as possible. Even if you do decide to slow down and fight off the bots, you’ll immediately find that there’s nothing fun about them. They take too much damage, kill you too quickly, and are generally boring to battle.

And then there are the loading times. In order to track down Dahl and his lab chief, you’ll need to weave through several areas of Talos-1, retracing your steps quite a few times as you figure out where they are and how to stop them. If you are playing on PS4, as I was, you’ll spend the bulk of your time staring at loading screens.

There is nothing fun, satisfying, or rewarding about this. You might choose to take a breather from the main story and go do some side-quests, like getting a painting for a doctor or rescuing some crew members under siege, but this will only extend the misery. And, as you’ll soon find out, none of it means a thing.

Because then comes the epilogue. The goddamn epilogue. Once the credits have ended, you discover that the entire game was actually a simulation (which means the intro was a simulation within a simulation) and that you are in fact a Typhon who has been injected with Morgan’s memories.

This is, of course, bullshit. It’s a cop-out ending that renders all of your actions meaningless and makes it clear that nothing really mattered. All of those hints about the robot January’s true nature? That recording you find about Morgan’s previous robots (October, etc.)? The questions surrounding Alex’s real motives? All of it meant nothing, because it was a dream the whole time.

Prey is way better if you pretend that it ends three-quarters of the way through. So just do that.