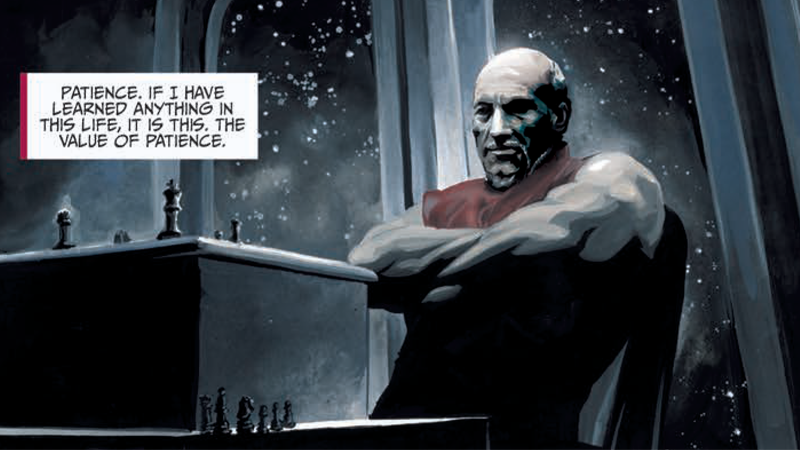 Star Trek's Mirror Universe is one of the most enduring storylines across the whole franchise, and will always have a sinisterly-goatee'd place in our hearts. A new IDW comic plans to bring the Next Generation crew to the Mirror Universe — but how? We spoke to the team behind Mirror Broken to learn more.

After kicking off in a much-talked-about Free Comic Book Day issue, Star Trek: Mirror Broken is a six-issue miniseries from Scott and David Tipton with artwork painted by J.K. Woodward. It follows Jean-Luc Picard and his crew as they strive to conquer strange new worlds, enslave new life and civilisations, and boldly go where no Imperial has gone before in the Mirror Universe. On the hunt for a rumoured new capital ship that could change the fate of the Empire itself, Picard makes a daring attempt to claim it for himself... and is willing to do anything to get his way. 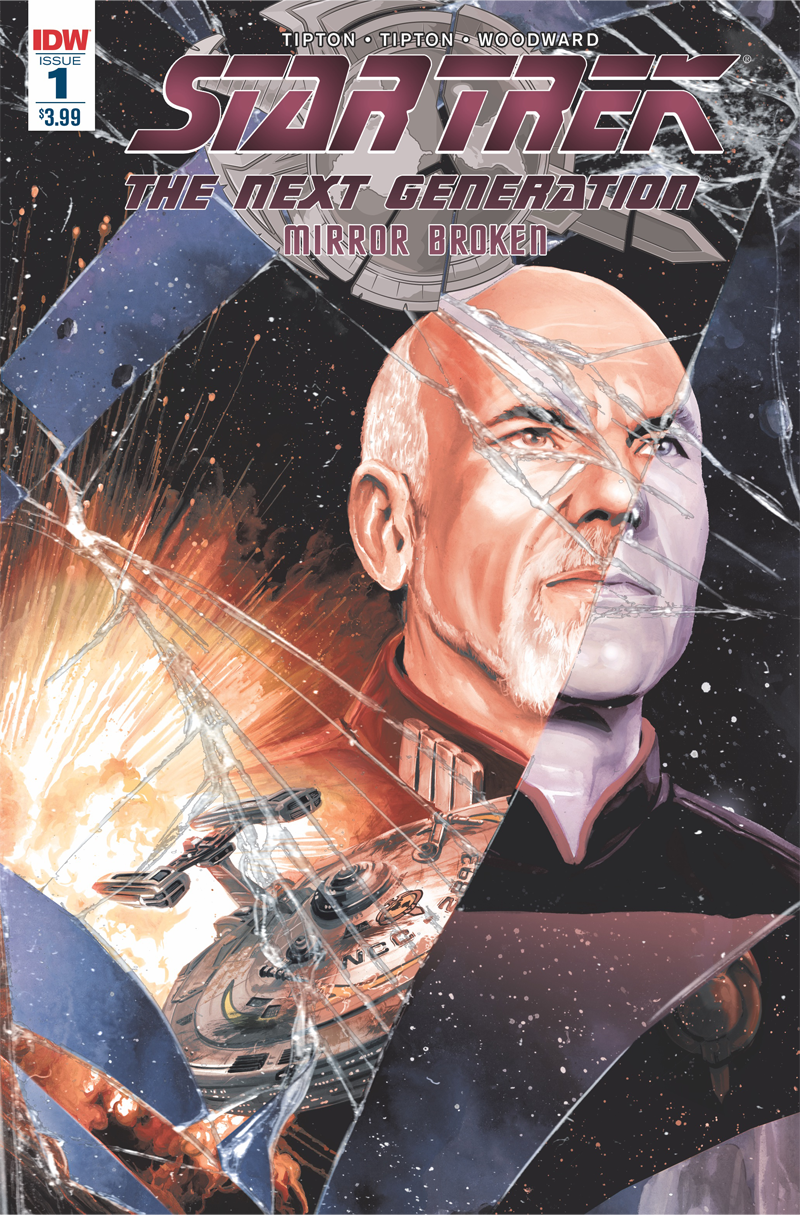 Thanks to past stories in Star Trek, we know that the villainous Terran Empire that Kirk first encountered in "Mirror Mirror" was dismantled by the time of Deep Space Nine — so how can there be a Mirror version of Picard, Data and Troi? Find out in our exclusive preview of Star Trek: Mirror Broken #1 below, along with our interview about how the series came to be, and the creative team's reaction to all the love for buff Picard.

When the series was first announced, fans were a little confused, given what happened in the Mirror Universe by the time of Deep Space Nine, by how a TNG Mirror Universe story would play out. Why did you want to tell this story, and was it hard to try and come up with a reason for doing this with the TNG crew?

Scott Tipton: As always, the easiest answer is the simplest: No one else had. Since the Next Generation's cast was almost entirely a blank slate in the Mirror Universe, we couldn't resist the opportunity when asked to fill in the gaps and bring the Mirror TNG crew to life. Tell us a little bit about where we find the Mirror TNG crew in Mirror Broken.

David Tipton: At the beginning of Mirror Broken we see Picard as captain of the Stargazer, a ship that's seen better days. Bottled up by the Klingons and the Cardassians, what's left of the Terran Empire is in pretty bad shape. Picard is doing his best to maintain his ship in a situation that's looking increasingly grim for the Empire.

Scott Tipton: That's kind of the beauty of it: They're all over the place. Some, as we see in the FCBD issue, are on the Stargazer, like Picard, Data, Troi and Barclay. Others are scattered around the quadrant on different assignments and we'll see how fate, circumstance and ambition bring them all together. The Terran Empire was an emphatically sinister organisation, but by the time of TNG, Mirror Spock's reforms are in place and the Empire is besieged and failing. What was it like trying to balance the outright villainy of the earlier Empire we saw in the original series with its form by the time of TNG?

David Tipton: What we have in Mirror Broken is a Terran Empire right on the edge of final collapse. The Klingons and Cardassians don't want to bother with a difficult final siege of the Terran solar system, and are just waiting them out. What remains of the Terran Empire has rejected the reforms of Mirror Spock and has reverted back to the values and culture we saw in the original Star Trek "Mirror, Mirror" episode, but it's an empire that is a shadow of its former self.

Scott Tipton: And it's tricky: You can't just ignore the villainy. That's what made "Mirror, Mirror" so fun and appealing. What we tried to do is keep that brutality while still trying to make the characterisations seem real and not just a caricature. And the fact that it had been established that Spock's reforms had been a failure certainly helped. It added a desperation to it all.

Scott Tipton: They're sinister, yes, but they're still themselves. That's what we tried to keep in mind when we were writing. They're not opposites of the characters we know; they're the same people, but brought up in a much more abusive and vicious environment. How would that change them?

David Tipton: The Mirror characters we saw in the television episodes actually varied a lot. Some were downright evil, others less so. Similarly, some were complete opposites of their Prime universe versions, but others were not. So there's an interesting spectrum of differences that have to do with the different circumstances and history of the Mirror universe. What the Mirror universe does is allow you to see what people and circumstances might be like under different conditions and if their natures are different than the ones we are used to, and that ends up being strangely compelling. I think it's why those episodes have remained so popular. Here's an example: It turns out that Mirror Picard actually seems to have some better interpersonal skills than Prime Picard does. As that theme emerges in Mirror Broken, it's interesting to see how it makes you think about Prime Picard's personality as well as that of Mirror Picard. 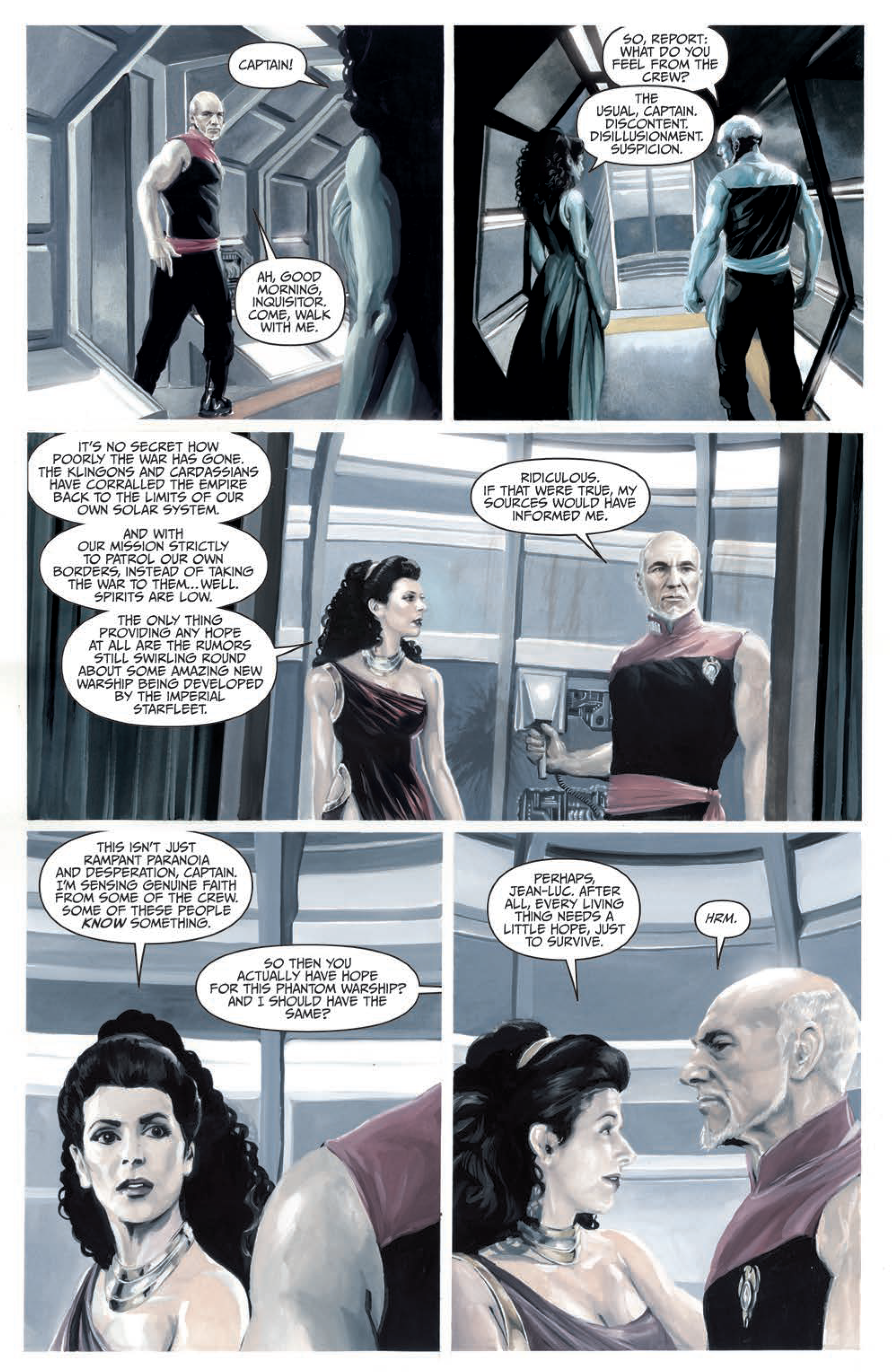 Design wise, what were some of the prevailing thoughts going into creating the Mirror Universe looks of the TNG cast?

Scott Tipton: Well, this was something that came about previously, before David and I came on board. J.K. was hired by CBS to create a style guide for Mirror Universe TNG characters, and so most of the early inspiration on design came from J.K. and CBS licensing exec John Van Citters. They gave us so much great material to work with.

J.K. Woodward: I was hired to work with CBS on a licensing style guide for Star Trek's Mirror Universe. Since TNG didn't have a Mirror Universe episode to draw inspiration from, CBS had me design and illustrate characters, ships, settings, et cetera. They hired Style Works to design the colour palette, logos and general standard for the style guide. I illustrated over 50 designs that we chose or cherry-picked aspects from, which led to what you see in the comic today.

We obviously wanted to keep the swashbuckling aspect established in TOS's "Mirror, Mirror", but we also added a fascist aspect because of themes touched upon in the DS9 and ENT episodes. With this in mind I gave them high leather boots and three-quarter [length] leather coats, emulating Italian and German officer dress uniforms from WWII. 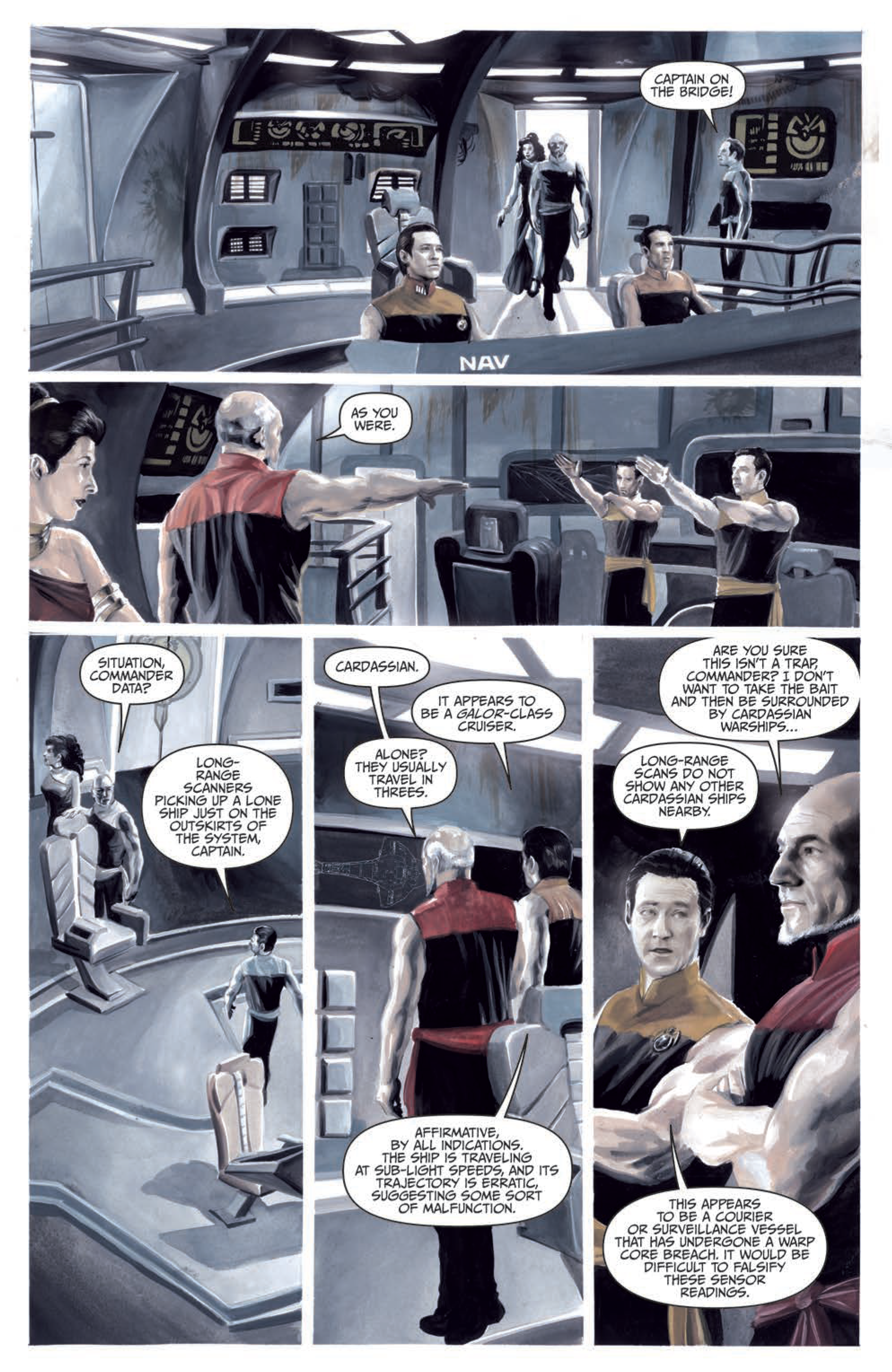 So, we have to talk about something that's drawn a lot of attention to Mirror Broken — J.K.'s depiction of the Mirror Picard as a buff, sleeveless ISS Captain. How did that design first come about, and have you been surprised at the reaction to it in the wake of the Free Comic Book Day issue's release?

Scott Tipton: It's funny, the reaction has been huge, but no one's complaining about it. People see goateed Picard with those guns, and they go, "Awwwww yeah." I maintain, if you go look at episodes like "Starship Mine", or the last act of First Contact, Picard was always ripped. You just couldn't see it under the tunic.

David Tipton: Ah yes. Some have even speculated that J.K. must hate sleeves. J.K.?

J.K. Woodward: Well, the sleeveless aspect was something that was already established for the Terran Empire. I just bulked or toned up a few characters. Because of the aforementioned fascism theme, I thought it was logical that strength of any kind would be a priority for these characters and since we were drawing the actors, we could more easily make physical changes with regard to build. However, I want to echo Scott's statement that Picard was simply sleeveless. He wasn't as physically enhanced as people assume. Patrick Stewart was in phenomenal shape.

Most Mirror Universe Trek stories involved a character from the "prime" universe making their way over to the Mirror one. Can we expect the same in Mirror Broken or will it strictly stick to these alternate characters?

David Tipton: I'd never say never, but I think for now the emphasis in Mirror Broken is on the Mirror characters. I think it's nice to shake things up a bit and not emphasise the crossover element. That doesn't mean something might not be coming up later on…. Finally, we have to know: Can you tell us what Mirror Picard's workout regimen is like?

David Tipton: Oh, I think we get a glimpse of that in issue #2!

J.K. Woodward: I just finished painting a scene that may give you just what you want. You'll just have to be patient.

Star Trek: Mirror Broken #1 is on shelves this Wednesday, May 17.