What We Loved (And Didn’t Love) About Guardians Of The Galaxy Vol. 2

There’s a new Guardians of the Galaxy movie! Let’s talk about it.

Mike Fahey and I are both avowed fans of James Gunn’s original Guardians of the Galaxy film, and both of us headed to the theatre over the weekend to see his follow-up. Did the second outing capture the unlikely charm of the first one? Is it possible to truly accept the fact that this movie takes place in the same fictional universe as Hawkeye’s farm? Is Yondu merely great, or is he the greatest? Let’s break it down. Mike Fahey: Well, Mr. Hamilton, I do agree that it was a completely charming movie with a whole lot going on, but I wouldn’t quite call it crowded. If fact, I think it had almost exactly the right amount of things.

Kirk: Oh, nice. So we don’t have the same take! These things are less fun when everyone has the same take. So yeah, let’s talk about that crowded thing first.

I felt like… ok, basically, Guardians 2 felt to me like it’d feel if the Avengers movies didn’t also have the supporting standalone series. Thor, Captain America, etc. If they had to do all the character development in the big ensemble movie, rather than in the single-hero movies. Which wouldn’t necessarily be a bad thing, but it’d definitely feel different. While I liked how Gunn developed each of the main characters, Rocket and Yondu in particular, I also wanted a little more time to allow everything to happen. I wished the better subplots had been given more room to breathe.

Fahey: OK, when you put it that way I can certainly see your side of things. The story did play out pretty quickly for the amount of plotlines being created and resolved. But they were each handled so artfully and resolved so satisfactorily that I didn’t really mind the relatively short amount of time given each. I’d say we had what, five or six plots given at least a good 20 minutes each? Beats waiting for a two hour movie about Rocket getting in touch with his feelings of isolation and loneliness. Not that I wouldn’t line up for that. I’m just glad I don’t have to.

Kirk: Hah, right. Afterward I was thinking it through and, do I really want a side movie starring Rocket and Yondu? I’m not sure I do. I mean I also would totally watch it, but, right. It’s ok that I don’t have to.

Fahey: Funny we both zero in on that plot. Yondu was such a bit player in the first film, just a blue backwoods alien with a Southern accent (even space has a South). This time around he’s . . . well hell, he’s a big deal.

Kirk: Yeah, man. I’ve always liked Michael Rooker’s specific weirdo gutter-threat acting, and it was fun to watch him get to dig into a performance like he did. Even in the first movie, there was always this hint of a lie around how he treated Peter. The Ravager doth threaten too much. That scene in the sequel where he finally laid into Rocket was really good, and one of the few times the movie didn’t immediately undercut a dramatic moment with a joke.

Fahey: That such pathos could come from a pair of such comedic characters. And I was expecting a joke to come after he delivered that one line, “You’re me!” But no, the move just let me sit there and tear up into my nachos. Following the silly opening moments with Baby Groot dancing and all the jokes, I was afraid this sequel was going to be all jokes and no heart. Now I feel like that’s exactly what James Gunn wanted me to think.

Kirk: Yeah. And while some of the jokes definitely landed more for me than others, the good ones were really good. Mary Poppins, Trash Panda, the entire sequence where Peter is asking everyone for tape… hahahaha

Kirk: You mentioned all the storylines earlier – it really was impressive how many individual arcs they smushed into this movie. Aside from Rocket and Yondu, how did you feel about the other arcs?

Fahey: Let’s see. We had Gamora and Nebula at odds in a plot I was positive was going to be resolved one way, only for it to be resolved the exact opposite way. Karen Gillan elevated Nebula from the one-note villain she was in the first film to a deep, tragic character.

Kirk: That was good. Karen Gillan has a great voice.

Fahey: “I just wanted a sister.” And I am tearing up again.

Kirk: For a storyline that was mostly setup for the inevitable showdown with Thanos, the stuff between her and Gamora had some nice moments.

Fahey: I followed Karen Gillan around as a Doctor Who companion for a couple of years, and though I know she is the actress playing Nebula, I completely forgot while watching. As I was thinking about her scenes while leaving the theatre I was like, “Oh wait, that was Karen Gillan doing all of that. Neat!”

Kirk: I also liked that they gave Zoe Saldana more to do this time around, in general. I wasn’t fully satisfied by the love story between her and Peter, but the scene where they danced together was a nice callback to one of my favourite scenes from the first movie – when he tells her about Footloose, and she pulls a knife on him. Drax may be right that some people just don’t dance, but it kinda seems like Gamora dances.

Fahey: She was definitely dancing right there. The Drax/Mantis subplot was the goofiest of them all… in fact, they may have gone over the top a bit with Bautista this time around, but that one damn moment makes up for all of it.

Kirk: I think Drax was probably the most overcooked of all the main characters. I loved the scenes toward the end of the first movie when he would begin laughing uncontrollably, but it felt like they doubled down a little too hard on the notion of him as this joyful buffoon. Which is a shame, since usually I generally like it when people in action movies (or games) express amazement at the incredible things they do.

Mantis also didn’t do very much for me, in general. Her power gives her the ability to explore the pain all of these characters have suffered, but she was mostly just the butt of a bunch of random jokes.

Fahey: But the one time Mantis really used her power — the moment I was speaking of, when Drax was sitting there stoically remembering his daughter, and she put her hand on his shoulder and just starts sobbing uncontrollably. That was worth all the jokes for me. This is turning out to be the crying-est chat ever.

Kirk: Yeah, that was a good scene. Speaking of emotions, I didn’t really connect with Ego. What was your take on him? Pro? Con?

Fahey: I was amazed they actually made him a living planet. In the comics it is right there in the name, Ego the Living Planet, but I somehow didn’t expect it would play out that way. As a villain, he was better than anything else Marvel has done lately. I think the big reveal about how the relationship between Ego and Peter’s mum ended was rushed and could have been handled with more subtlety. It was too, “OK, now to flip the ‘evil’ switch.”

Kirk: Hah, yeah. I figured something was up with him from minute one, since the first thing he said was something along the lines of, “Soon, these will spread to every planet in the galaxy!” Good guys don’t say things like that. I agree that Ego was more interesting than the average Marvel movie villain since, Civil War notwithstanding, Marvel movies have generally had trouble with villains. But I still didn’t really get his whole deal. His planet just seemed sort of lonely and dumb, and I didn’t understand why Peter would think it was cool. It sort of looked like a vague Yes album cover, or like No Man’s Sky?

Fahey: Glad I am not the only one who immediately thought of Roger Dean album covers.

Kirk: I made this joke on Twitter already, but Guardians 2 was basically about how Pac-Man is a better game than No Man’s Sky.

Fahey: Ego’s whole deal was to spread himself throughout the galaxy, which would give him real ultimate power in order to . . . I do not know. Now that I think about it, what the hell did that guy want?

Kirk: He wanted to create a procedurally generated galaxy where every planet is populated by totally different alien races! Preorder now for PS4 and PC.

Fahey: I didn’t see any giant dinosaurs on that planet, and the characters rarely ran into each other.

Kirk: True to life. So before we wrap up, I want to at least mention the seven hundred different little scenes they stuck in during the credits. I had to go look up what some of them meant, because there was a lot crammed in there. Did you follow everything the first time?

Fahey: I did, but I am a giant comic book nerd. We had the birth of Adam Warlock, a nod to the original Guardians of the Galaxy team starring Rocky, what else?

Kirk: The guy next to me was thrilled by the scene with the OG Guardians. It’s kind of fun to gauge the importance of Marvel credits scenes by the reactions of the more informed folks around me. I liked Teen Groot.

Kirk: I gather that Adam Warlock is associated with the only remaining unclaimed Infinity Stone?

Fahey: Yes, Adam Warlock has an infinity stone on his forehead, though I’ve read he won’t make it for the big Infinity War. Kind of sad, seeing as… well, look: 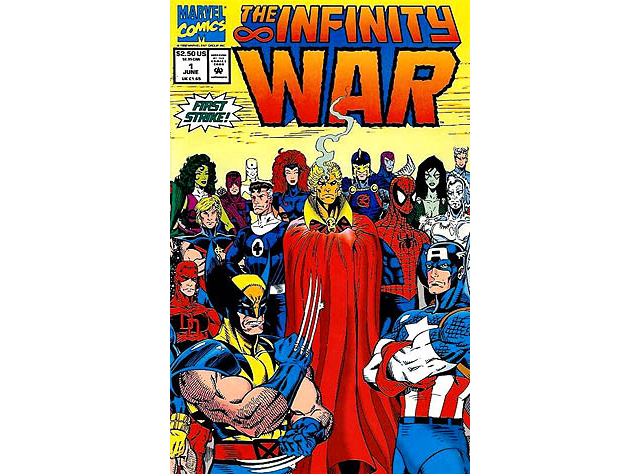 Kirk: I guess at some point they have to cut it off or they will need to make six Infinity War movies, but that’s too bad. It’s wild to think that all this stuff from Guardians is going to eventually mesh with all the other characters and plotlines from the rest of the MCU. I can’t wait to see them try, regardless of whether or not they succeed.