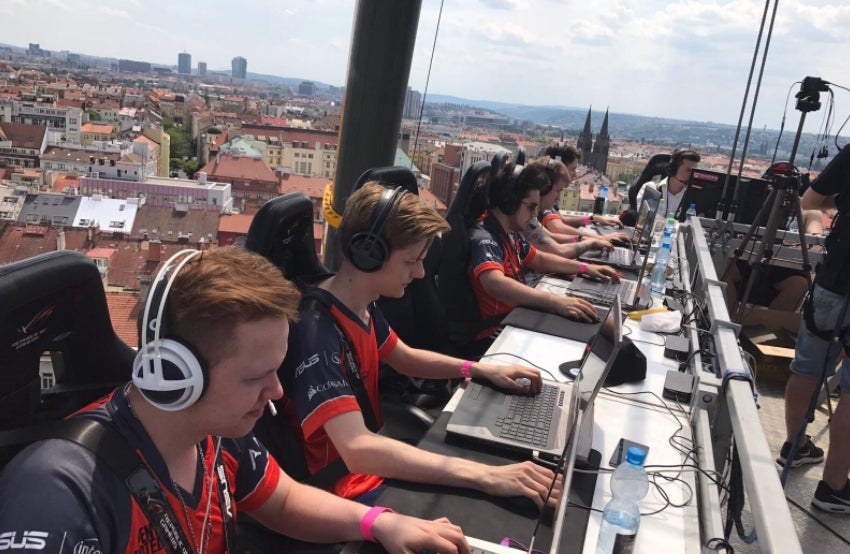 Typically, esports stages don't get much more elaborate than a big screen, some colourful lights, and maybe a smoke machine for effect. Over the weekend, Republic Of Gamers decided to one-up everybody with a "stage" suspended from vertigo-inducing heights.

As part of its "Extreme Gaming" event (via PCGamesN), ROG hosted a Counter-Strike exhibition match between German team Penta and Czech team eXtatus that took place roughly 9.14m in the air. While none of the players spoke English, you can get a good idea about how many of them were feeling based on facial expressions alone:

I know that face well. It's the one people make when they get on roller coasters and then realise they don't even like roller coasters, and oh jeez here comes the first drop, fuck this.

Helpfully, a Redditor translated a conversation between two commentators as the crane hoisted the platform into the air:

Commentator 1: "Hey, hey this is really not good. I want to go down."

Commentator 1: "Shut up! I need to hold on to something but there is nothing I can grab here!"

Commentator 2: "Well at this point I hope we are just a quarter way up. They could get us higher."

In the end, eXtatus won pretty decisively, proving that they were less unsettled by the uncaring forces of gravity and ground leering over their shoulders. And while it was merely an exhibition match, now everybody involved can say they did it, handily answering the question of "why?" with the ever-reliable "why not?"