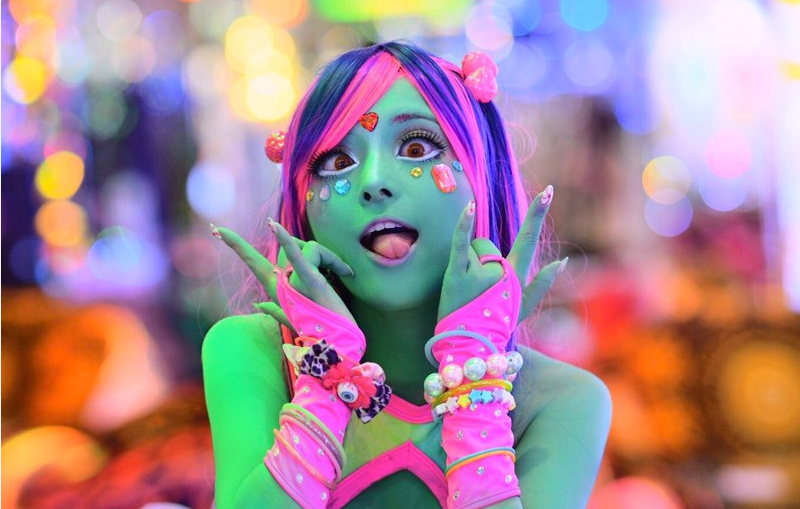 Welcome to the world of "ishoku-hada" (異色肌), which can mean "unique skin" or even "remarkable skin." It's inspired by the otherworldly characters who appear in anime, movies, and video games.

"For a while, I've been doing ishoku-hada cosplay," Miyako (top photo), who works as a DJ and model, tells Kotaku. 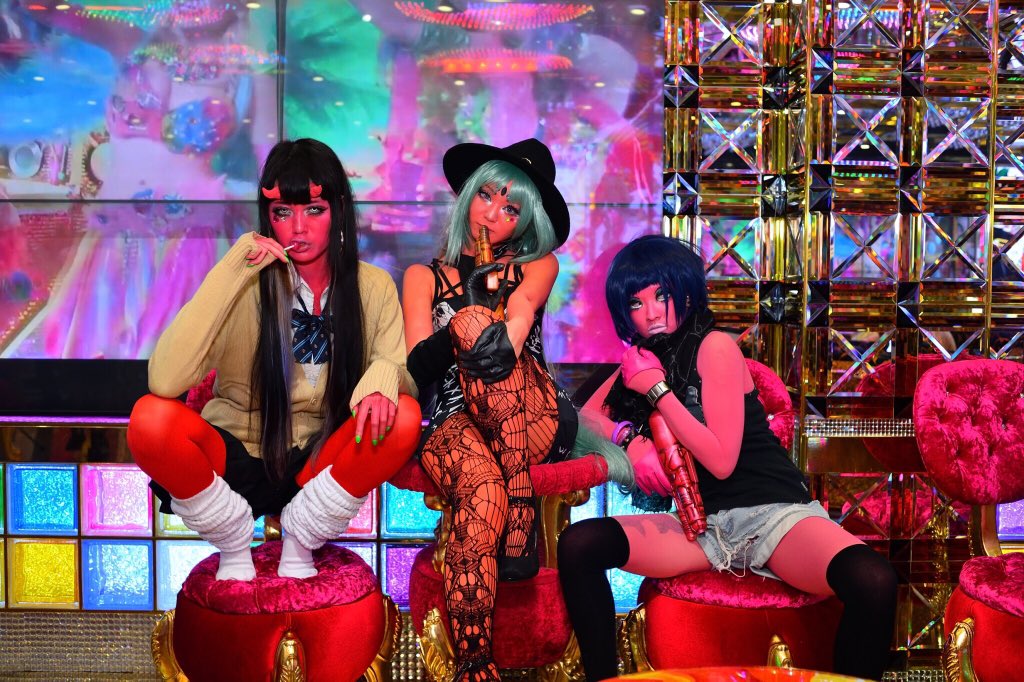 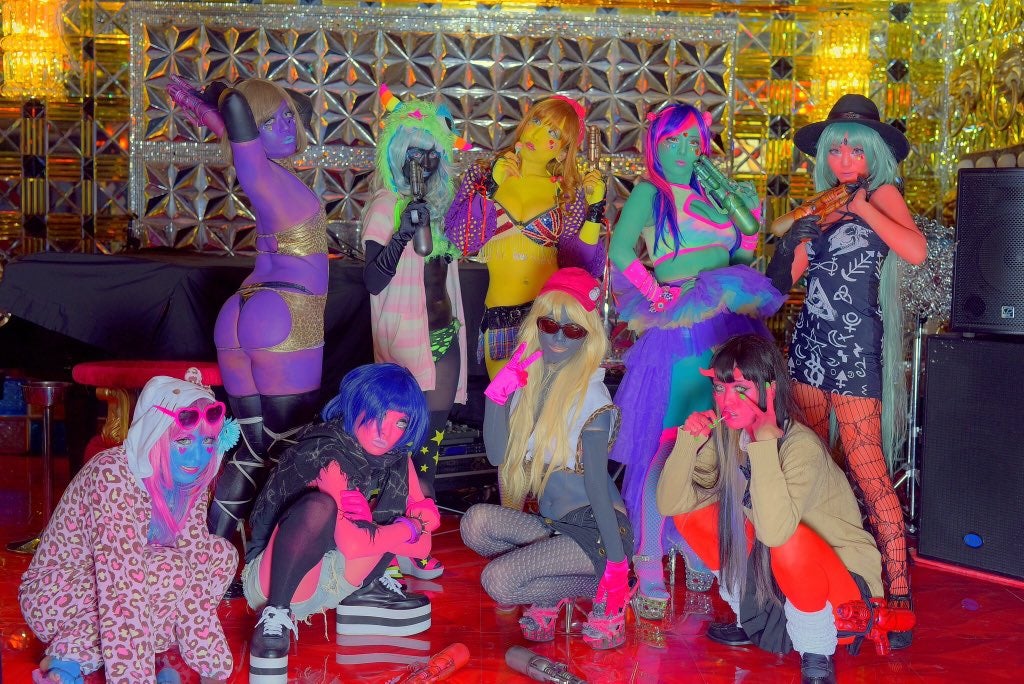 Miyako came up with the idea to do a ishoku-hada shoot with a bunch of friends at the American Bar & Cafe Ren in Tokyo's Kabukicho. Each woman painted herself a different colour: orange, pink, grey, yellow, aqua, purple, etc. (Note that the black paint could inadvertently cause offence in the West because of the history of black face; however, that is not the intent here.) 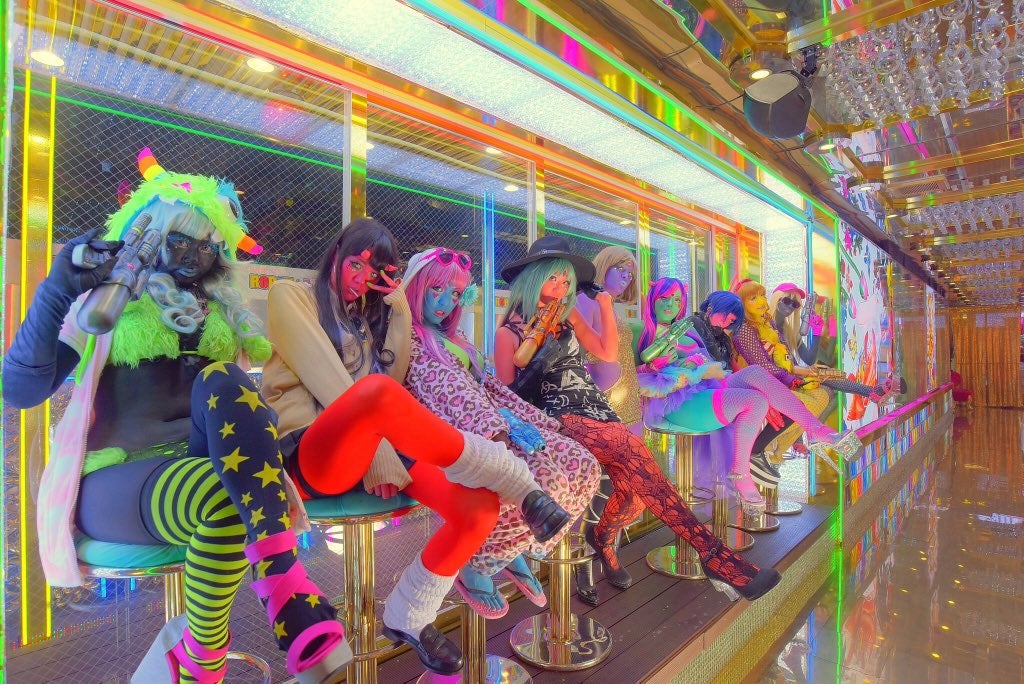 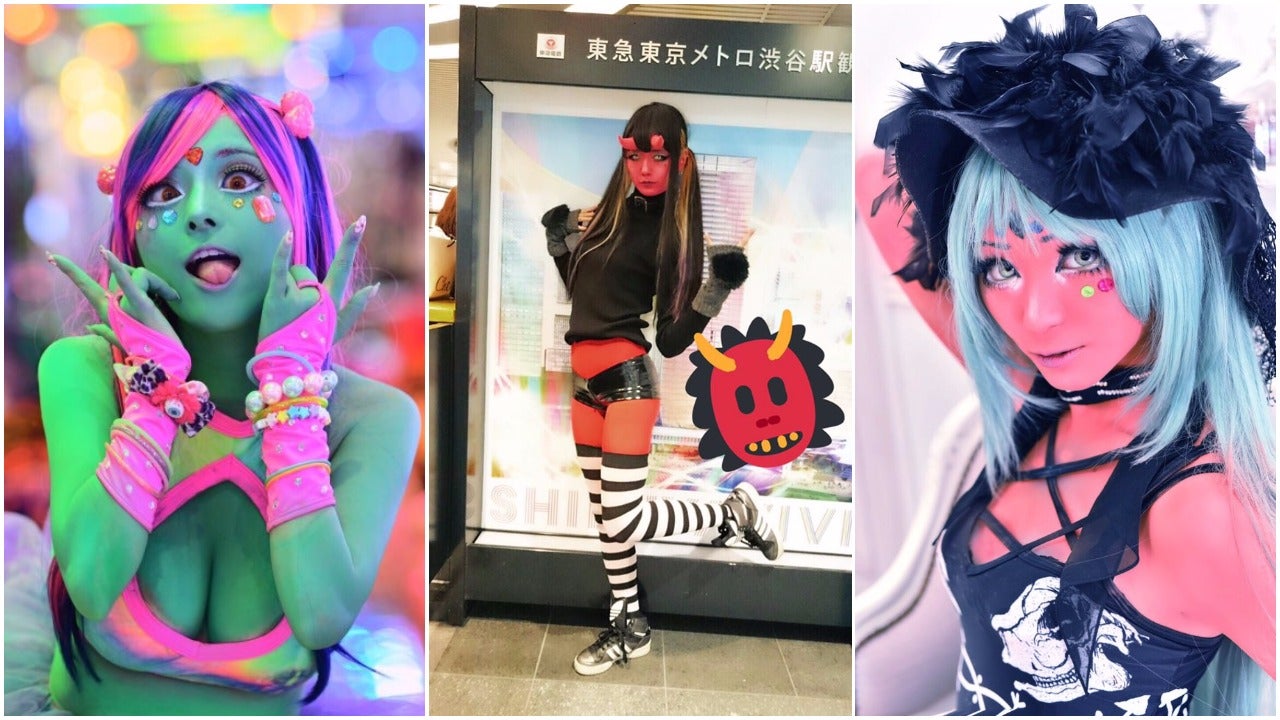 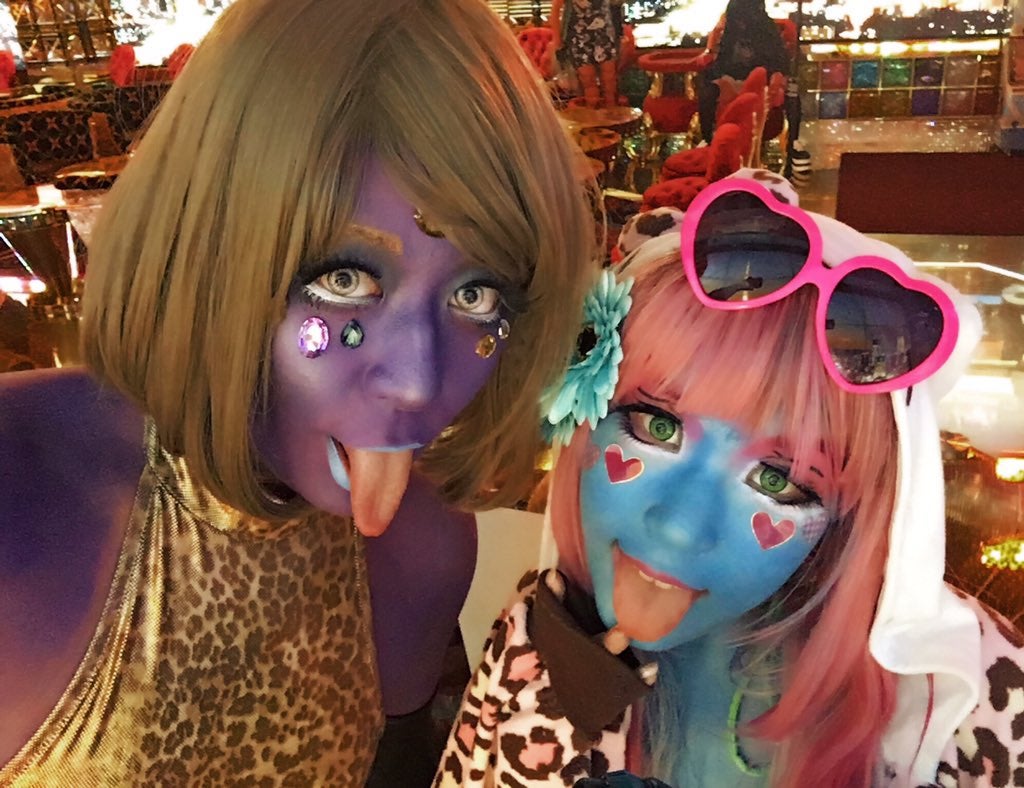 The look does appear reminiscent of "Yamanba" fashion of the early 2000s, which a style of dress and make-up in which heavily tanned Japanese women typically had pink and blonde hair, donned pastel and Hawaiian-inspired clothing, and wore panda style make-up. This is no accident, because Miyako says that fashion style is also an influence.

Ditto for video games, which are home to numerous ishoku-hada characters.

While Phantasy Star Online 2 seems to be especially well suited for ishoku-hada, these colourful characters have existed for a long time in anime. In recent years, the red-coloured demon character Scanty from the anime Panty & Stocking with Garterbelt has inspired cosplayers to cover their bodies in red paint. Hollywood movies and American comic books have done the same in the West. Avatar did it with blue paint, and before that, there were Marvel mutants like Mystique. In both parts of the world, there is a long tradition of colourful characters. Here, that tradition is now intersecting with fashion. 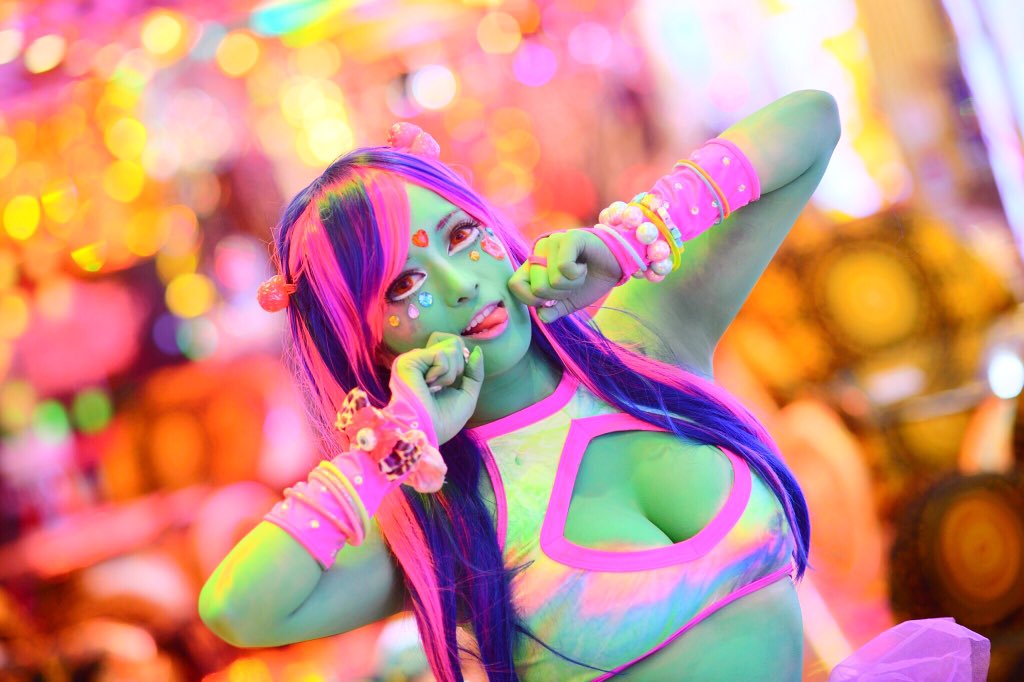 "This past Halloween, I did an in-store event where I dressed up like a devil, painting my whole body red," says Miku, who was decked out in purple for the recent shoot. This time, covering herself in stage make-up took around three hours. "I needed help painting my back, though, because I couldn't do that myself," Miku says, chuckling. 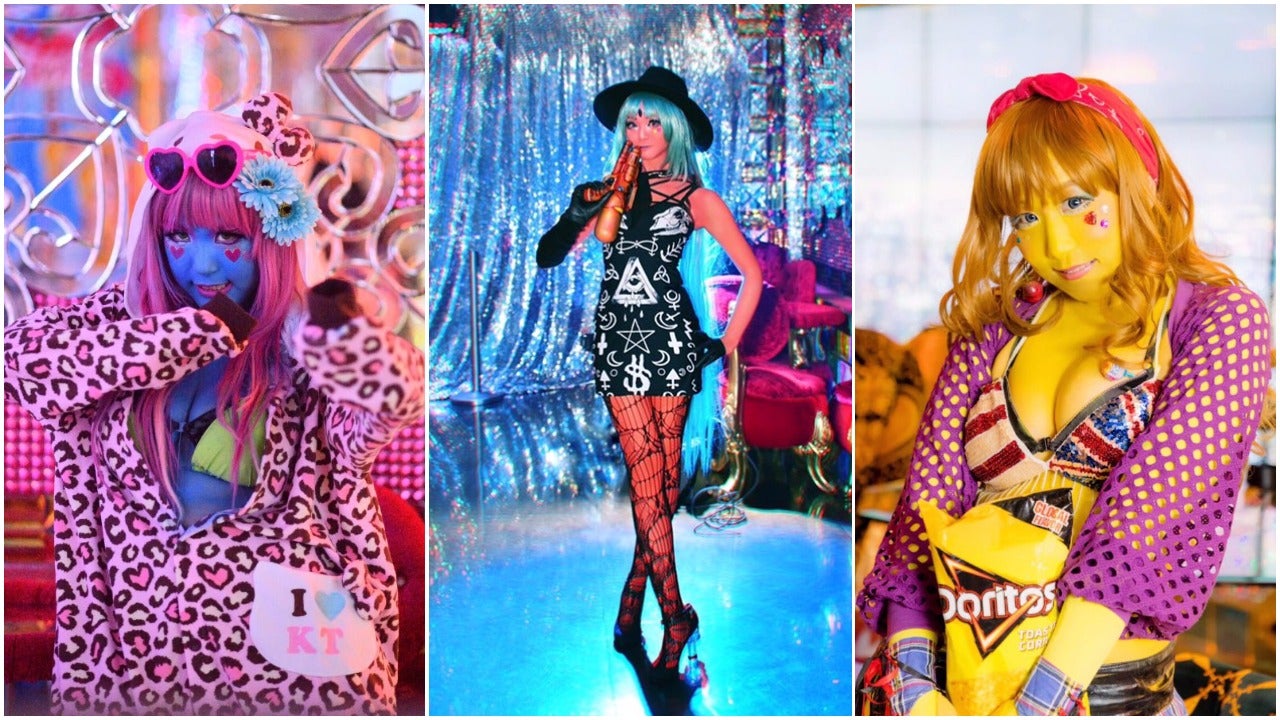 While Miyako and her ishoku-hada crew are just now getting noticed online for their colourful creations, appearing on the Japanese version of The Huffington Post, don't assume this is part of a mass Japanese fashion trend. It's not. Even when there were yamanba wondering the streets of Tokyo and Osaka, that was never mainstream.

However, it became widely covered and promoted by Egg Magazine, a niche but influential fashion periodical that's no longer in publication. The mainstream Japanese media also covered the Yamanba trend, and it's starting to cover ishoku-hada, which could spawn imitators and actually turn this into a niche fashion.

In the meantime, ishoku-hada is already inspiring fan art. "I enjoy transforming myself, so I think it would be great if ishoku-hada caught on," says Miku. "I want to do it again, too," says Sonorama, who was painted in orange for the shoot, while Cherry Sunaga, who was in yellow, says she's keen to do ishoku-hada next time she's dancing.

Ishoku-hada hasn't started a brand new subculture in Japan. Yet. This is, however, certainly a colourful start.