Traversing Breath of the Wild‘s Hyrule unveils somber narratives inferred through its ruins and decimated villages. But it’s not all sorrowful. Some of the game’s most bizarre tales are told through its strange NPCs and locales, and they’re amazing.

It’s true there are eerie happenings and sidequests in other Zelda titles over the course of the franchise’s 30-year history. 2013’s A Link Between Worlds‘ macabre villain turned some of Hyrule’s denizens into paintings. When Twilight Princess‘ shadow beasts dropped from the sky and surrounded my Link in 2006, I got shivers every single time. Then there’s The Legend of Zelda: Majora’s Mask which takes its dark themes and oddities to a whole other level.

12 Reasons To Play The Legend Of Zelda: Majora's Mask

February will bring the remake of The Legend of Zelda. Majora's Mask where Link must save the world over a three day cycle that loops in a terrifying fashion, each cycle bringing life in the hopes of changing a doomed, stagnant world.

Majora’s Mask takes the cake for being gloriously creepy and my penchant for weirdness is part of the reason why it’s my favourite The Legend of Zelda title. So when Breath of the Wild (sometimes) stepped into peculiar territory, I was enthralled.

There were many strange moments I encountered during my 155 hours in Link’s latest adventure. Some of those were reminiscent of Majora’s Mask. Others were unique to Breath of the Wild‘s humour. All of them made me laugh or uneasy. Here are some of the best. 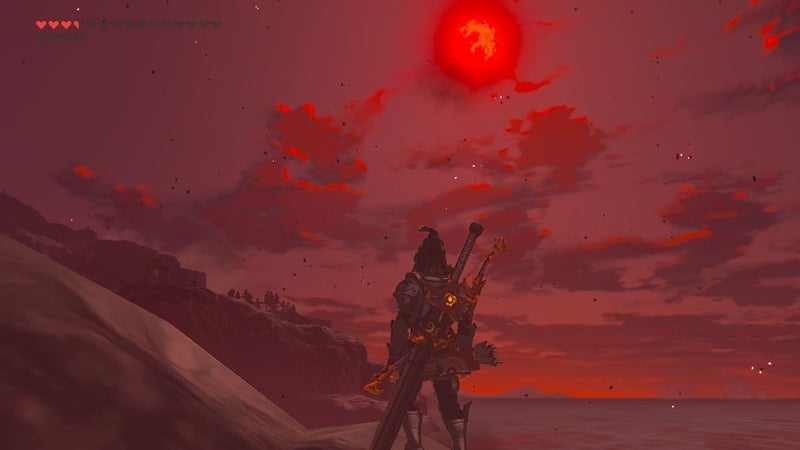 My eyes widened when I first encountered the scorched red land that accompanied the Breath of the Wild‘s blood moon rising. It was the same feeling I had when I frantically played the time travelling notes to send Termina back to dawn of the first day in Majora’s Mask.

Whereas Majora’s Mask‘s moon (that toothy harbinger of death!) threatened to crush Termina, the blood moon phenomenon in Breath of the Wild was a simple reset of the world — re-spawning hordes and foes to be challenges and resources. Although it turned out to be unimpressive overall, the striking visuals that accompanied it were unsettling.

My first couple of blood moons were experienced with no enemies around and within houses. It certainly made me curse when I spent hours trying to defeat a bokoblin camp only to have the moon bring all of those ghouls back. I also didn’t quite understand why Kass’ shrine quest required Link to be naked under the blood moon for the event to trigger but ok. Weird.

Kilton and His Monster Wares 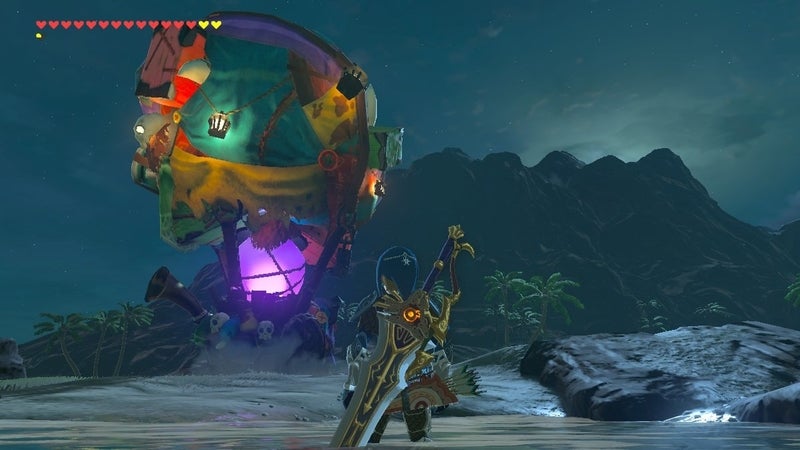 Triggering a separate quest will lead players to finding Kilton, a strange merchant with a fondness for monster parts. Harvesting monster parts in Breath of the Wild can aid in Link’s journey by cooking up stat-boosting elixirs. And if you cater to Kilton’s obsessive nature, trading in monster parts can net Link monster gear and masks. For anyone who has played Majora’s Mask, they’d know masks are vital to the game. I mean, it’s even in the name.

Majora‘s masks give Link power-ups with others transforming him from Hylian to a Deku scrub, a Zora, or a Goron. In Breath of the Wild, Kilton’s masks give Link the ability to disguise himself and blend in with certain enemies. Of course, when some of your enemies are not so easily fooled, like lynels, the masks’ effectiveness are virtually non-existent. 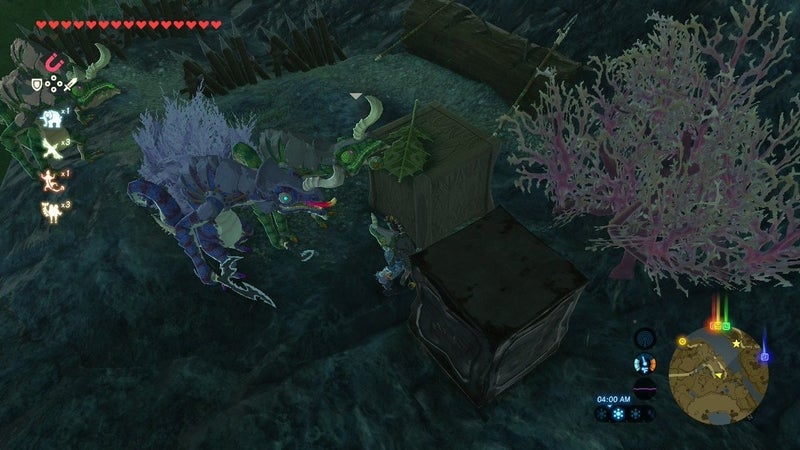 But the weirdest moment I had was when I donned the Lizalfos mask. Imagine my surprise when I waltzed into a Lizalfos camp mimicking their movement and sounds with the mask on, only to be followed by the curious foes who weren’t quite sure if I was truly one like them. They cornered me and began licking my face much to my chagrin, pondering my Lizalfos validity through their taste buds.

Kilton opens up shop under the cover of darkness, his patchwork balloon shop reminiscent of the colours of Majora’s mask. If that and his choice of wares aren’t an obvious nod to Majora’s Mask, I don’t know what is.

Bargaining Away Your Life With the Statue in Hateno 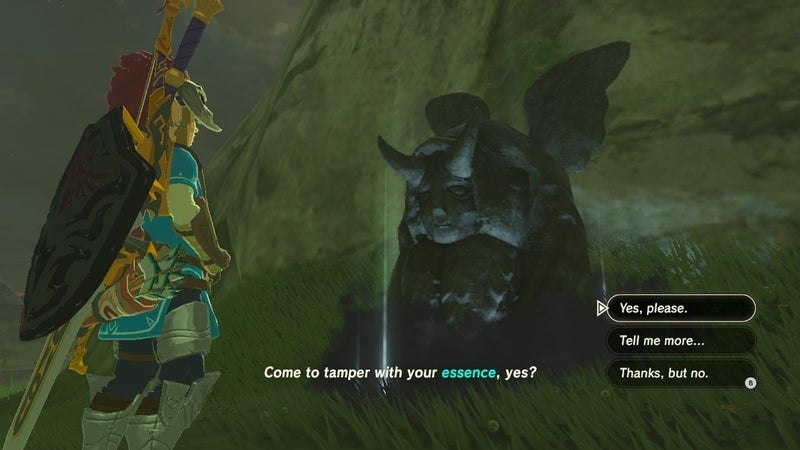 When the child in Hateno told me he found something strange in the village, I was not expecting a statue housing a malicious spirit to attack me. In a clever game design mechanic that allows players to barter heart containers for stamina wheels and vice versa, the statue’s purpose is not so devious. Its demonic bartering and presentation is though. I could never bring myself to use its services after being scarred when I first discovered it. Praying to it felt distinctly depraved given Link does the same to Goddess statues throughout Hyrule in order to receive blessing that will lead to peace. After meeting the evil statue, I became wary of the Goddess statues too.

After my first visit to Hateno’s monstrous statue, I never returned and it stood there behind the hill awaiting my decision to tamper with my physical strength and morality. That is, until I had to take pictures for this article. I can assure you it was still a harrowing experience.

Oh, Great! Another Cursed Statue in the Hateno Region 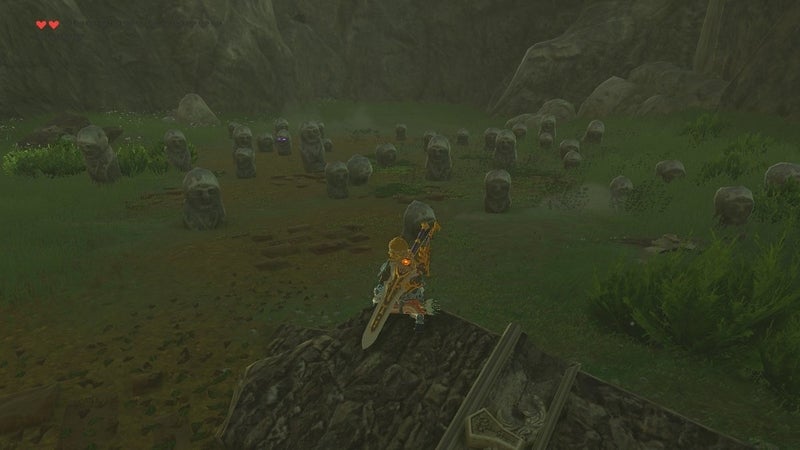 To think I built my house in Hateno, not only to that statue wanting to eat my soul, but near enough to another of the game’s frightful quest locations. Early in the game when I was exploring aimlessly one evening, I came across a group of statues surrounded by cliffs. One of them had glowing purple eyes — surely a sign of evil — and I didn’t yet have the Zelda know-how to begin tackling its puzzle. I forgot about it until multiple hours later and didn’t remember where I had seen it. By then I had a map full of stamps I needed to go back and take a second look at. Eventually I re-discovered its resting ground, standing among others like it — quietly waiting for nightfall to display the curse embedded in its stony body.

Hunnie, The Worst Child in All of Hyrule 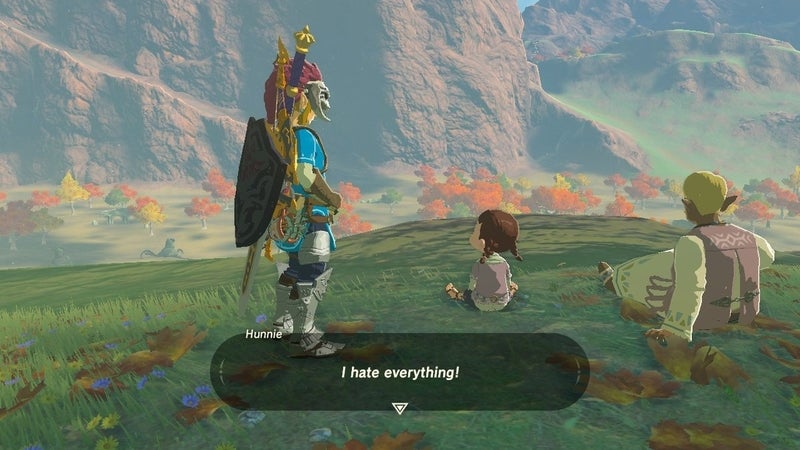 Demons do not only inhabit statues or swirl around the top of Hyrule castle in Breath of the Wild. Sometimes they’re found nestled in the souls of children. One such child was Hunnie, a Tarrey town resident whose parents became concerned when she stopped eating normal food and acquired a taste only for Monster cake. It’s as questionable as it sounds. Combining monster parts with sugar, wheat and eggs makes the item and it’s the only thing that will help Hunnie from falling into complete despair. The reward for saving her life? Sass.

That’s not surprising given who her father is: 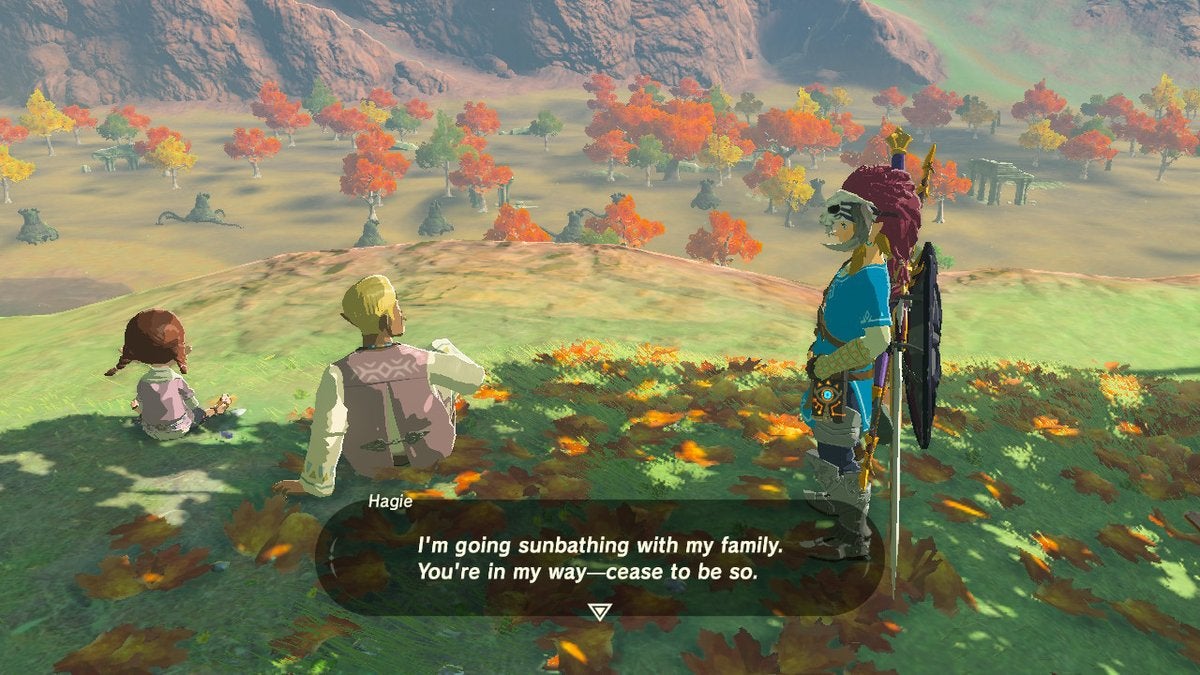 Don’t Even Think About Stopping To Smell The Flowers 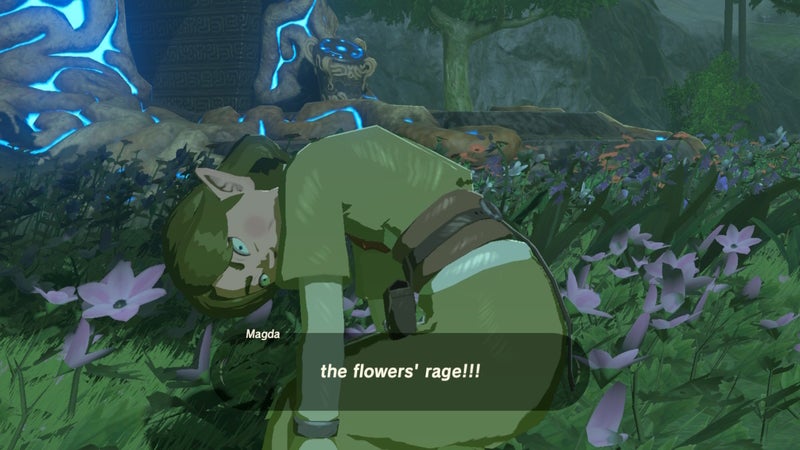 Look, I know there’s a sense of accomplishment in completing all 120 shrines in Breath of the Wild but at what cost…to the flowers? Keep off the grass or pay for it at your life’s expense. This NPC, Magda, is one of my favourites in all of Hyrule because of her exaggerated response to Link’s thoughtless “trespassing”. Saving the world? Who cares. The flowers need caring. There may not be flowers if the world is destroyed but you know what? That sounds like Link’s personal problem.

This quest is hilarious for how it plays out, each shot zooming in on Magda’s mutterings as she goes from 0 to 100 mph. It’s a build-up that’s half-expected, but still manages to come out of nowhere, showing that not all of Hyrule is so entrenched in foreboding chaos. Magda, the Flower Girl NPC is also an example of just how frightful some of Hyrule’s citizens are. There are many of them out there in villages, up in the mountains, on the beaches with Roscoe and scattered throughout the diverse land.

The Horse God Is Just…Yeah. 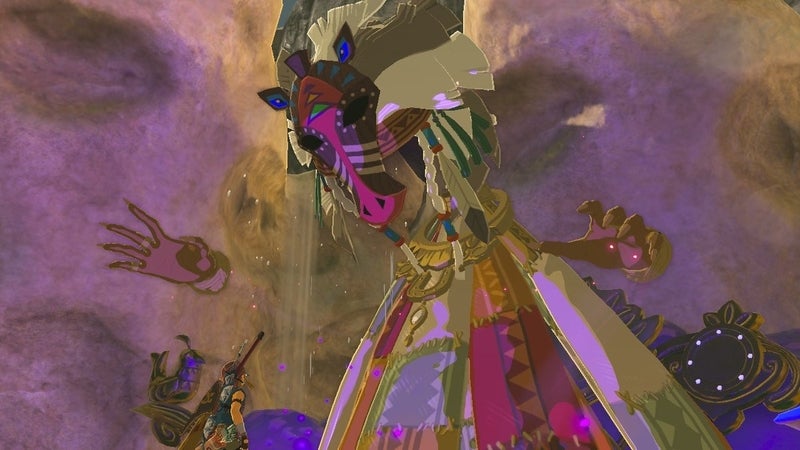 And finally, I didn’t have it in me to hurt a horse to see what kind of wrath I would incur at the floating, detached hands of the Horse God. Would he make good on his threat to eat me? I don’t know and I never will.

What are some of your favourite quests and who are your beloved NPCs from Breath of the Wild? I’d love to hear all about your favourite creepy moments from the game or other Zelda entries.