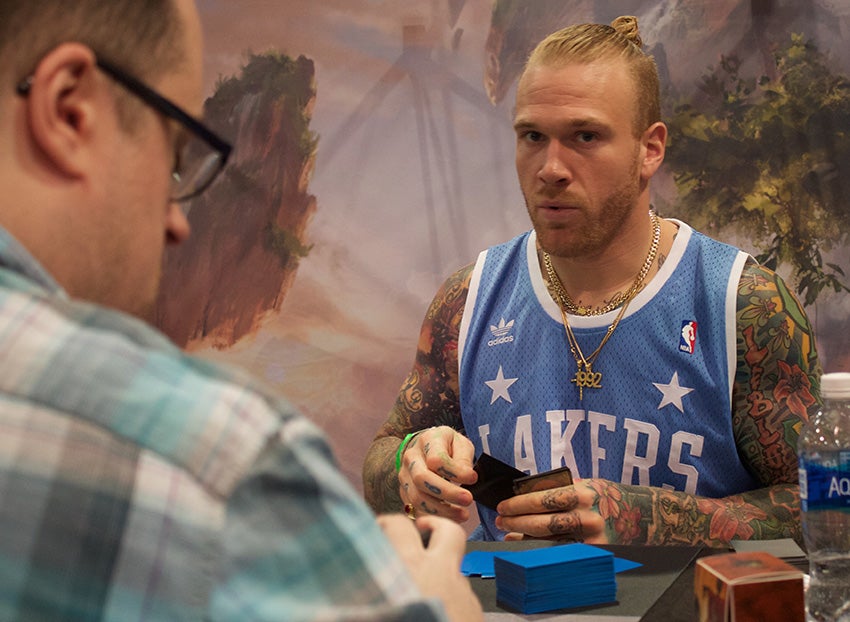 Cassius Marsh is known for tackling ball carriers as an NFL linebacker, but the Seattle Seahawk's 6'4", 111kg frame recently proved entirely useless in the mental athletics of Magic: the Gathering.

Credit: Wizards of the Coast

Marsh was invited as a special guest to last weekend's Grand Prix Las Vegas, a five-day Magic fest featuring Magic artists, vendors, cosplay, and three competitive tournaments. Marsh talked up his game, saying he is used to playing against "tier-one type guys", but Saturday's tournament sent him straight back to training camp.

Marsh picked up the game in his middle school years, and though he's played casually for over a decade, GP Vegas was his first large-scale tournament. Marsh was chosen to play his second round on camera in a feature match streamed live on Twitch to thousands of viewers. True to his football position, the linebacker piloted a controlling, defensive deck called Blue Moon; its strategy is to neutralise early plays and buy time until a superior endgame can be unleashed.

Unluckily for him, he was paired against a player using Affinity, one of the fastest decks in the format, which quickly assembles an army of tiny robots that can synergise Voltron-like and grow out of hand. Though he had fifty minutes allotted to complete a best-of-three match, Marsh took a pair of L's in under twenty.

The mass of muscle daintily replaces his card sleeves:

...and here's the concession and handshake for Game 2.

Marsh's final standings show a finish of 3,150th place out of 3,400 players, notching just one win over the course of the tournament. He didn't seem to take his losses too hard — he described his weekend as "a blast", and dropped a couple thousand dollars on new cards for his collection.

Marsh is already a minor celebrity in the Magic world, and made waves in the community a couple times in the past year. In November, his $US20,000 ($26,418) collection of cards was stolen from his car and never returned, though Magic's Seattle-based publisher Wizards of the Coast gifted him a care package in consolation.

When the holiday season rolled around, Marsh decided to give back, and along with Seahawks teammate Doug Baldwin played in a charity Magic tournament to benefit the Big Brothers, Big Sisters program of Puget Sound.