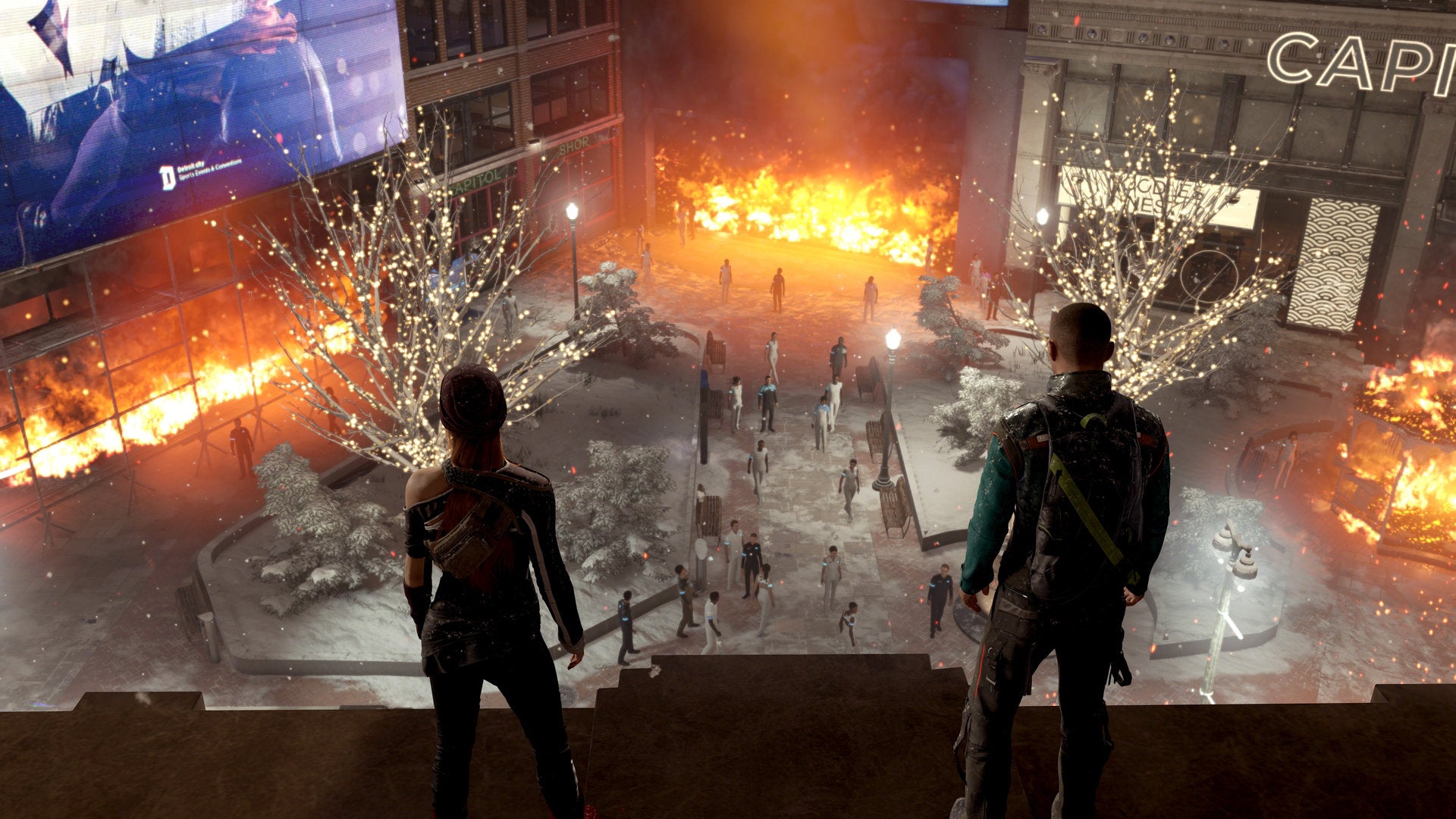 Near the end of the Detroit: Become Human demo I saw during E3, renegade android Markus and his partner North incite a riot among recently freed androids. If you choose to set things on fire, North triumphantly declares, "Now the humans will have no choice but to listen to us." Main character Markus, staring into the blaze, snaps back, "They will be afraid. Fear feeds hatred." To which North replies, "I'll take hatred over indifference."

The scene sure seems to be weighing in on protests and violence, but with all the subtlety of a brick through a window. Detroit is a game about a subjugated group asserting their humanity and trying to gain freedom from people who want to use them for service. It's hard not to draw parallels to slavery, racism, and events going on around the world. Despite this, however, director David Cage told me that he isn't trying to make a game with an overtly political message, nor is he heavily drawing on real world history or politics as influences.

"The story I'm telling is really about androids," he told me in an interview after the demo. "They're discovering emotions and wanting to be free. If people want to see parallels with this or that, that's fine with me. But my story's about androids who want to be free."

He cited Ray Kurzweil's The Singularity Is Near — a famous book about the future of machine intelligence — as his primary influence. "Personally, I think machines are going to become self-aware," he told me. "How are we going to deal with a race that's more intelligent than we are? What will we do when they want to be free?"

In the demo, Markus and North can answer that question in a number of ways. Their central goal is to break into a store by night and free a bunch of fellow androids, but they're able to do anything from sneaking and hacking their way inside to driving a goddamn truck through the front door. They can even fail and get the police called on them. The story branches from there, rather than telling you that you failed and forcing you to try again.

In the demo I saw, the truck approach ultimately led to the riot. After freeing the androids, Markus gave a rousing speech and encouraged the other androids to help him send a message. They then set to vandalising an abandoned city square, and a stark, red-and-blue meter appeared on screen. As the player made choices about how to advance the riot — for instance, by choosing to knock down a statue or merely tag it with holographic cyber-graffiti — the meter ticked toward either the red end (violent) or the blue end (passive). The person controlling the demo largely took violent actions, smashing windows, busting doors, and ultimately setting cars on fire.

As I mentioned above, North is fully in favour of the conflagration. "Violence is the only language humans understand," she says at one point. It isn't the most subtle depiction of why people engage in property destruction. When I pointed that out, Cage said that it was just one character's perspective. He told me the rest of the game is more complicated than that.

"It's the point of view of one of the two characters," he said. "What I tried to do with this game is not be binary, not be black or white, or good or evil. Sometimes doing something bad can turn into something good, or vice versa. There's usually more than one component [to situations in the game]. There's the androids, there's the humans, there's the public, there's the media. Your own people, what will they think of what you're doing depending on how you do it, what you say about it to them, what you say to the humans? The situation is not binary. It's actually quite multifaceted."

And yet, this pivotal scene unfolded clunkily, relying on a binary meter to help convey a complex spectrum of ideas. I pointed that out to Cage, who explained that the scene will have more factors playing into it in the final game. "[The meter] is a part of this unique scene," he said. "What is difficult for us to explain is that this scene is the only scene in the entire game where you have this gameplay and this situation. There's a lot happening. The complexity emerges from the broader story arc and not just this scene."

Still, this is the scene Cage and Quantic Dream chose to partially divorce from context and demo at E3, one that shows binary choices despite what they say about the rest of the game. Similarly, Detroit and this scene are relevant to things going on in the world today, whether or not Cage wants them to be. While Cage told me that he isn't trying to make a game with a particular message, he does want people to ask questions of the world around them.

"I don't want the game to have something to say, because I don't see myself delivering a message to people," he said. "But I'm definitely interested in asking questions to the player. Questions that are meaningful and that resonate with him as a person and a citizen. We live in a world that's full of hopes as well as fears. Fears about the present and also the future. Where are we going? What's going to happen? I just want to ask these questions and see how people react."