E3 Was Different This Year, And It Wasn't Just The Crowds 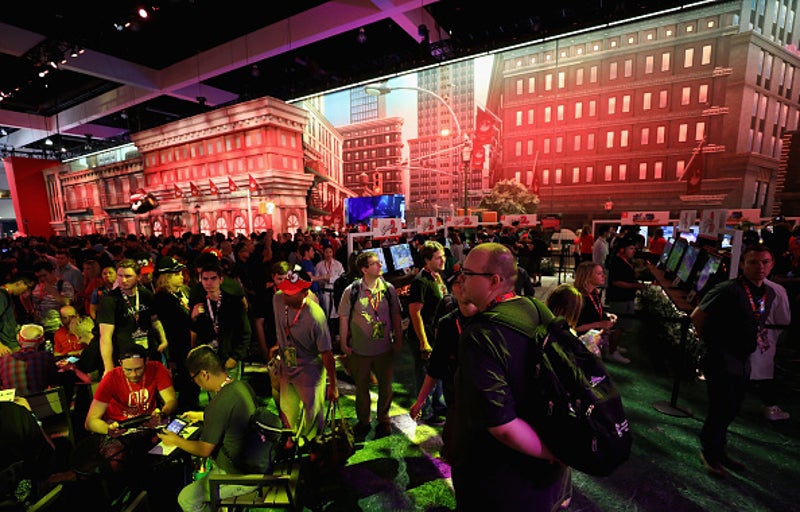 It's the first day of E3. I'm walking the show floor — or more accurately, oozing across it, slug-like, followed by a trail of my own sweat. I'm shoulder-to-shoulder with swathes of people. Across the way, crowds of people whoop and holler, each of them hoping to win swag they can stuff in their floor-length swag bags. 15,000 new people are in attendance this year.

E3 has never entirely been a business conference. For years, so-called regular people have been able to get in one way or another. This year, E3's parent company, the Electronic Software Association (ESA), decided to sell tickets to the general public.

That decision has brought the show's attendance up to nearly 68,400, a marked increase over 2016's attendance of 50,300. For reporters such as myself, E3 is fun, but it's also a grim exercise in attrition. It's a marathon of demos and meetings that leaves the body exhausted and the mind numb. For some of this year's new attendees, though, it was probably as though they'd finally gotten a golden ticket to Willy Wonka's video game factory. Many attendees were still there mostly for business, but others were purely for pleasure, and E3 was stuck — or rather, wedged — in the middle. 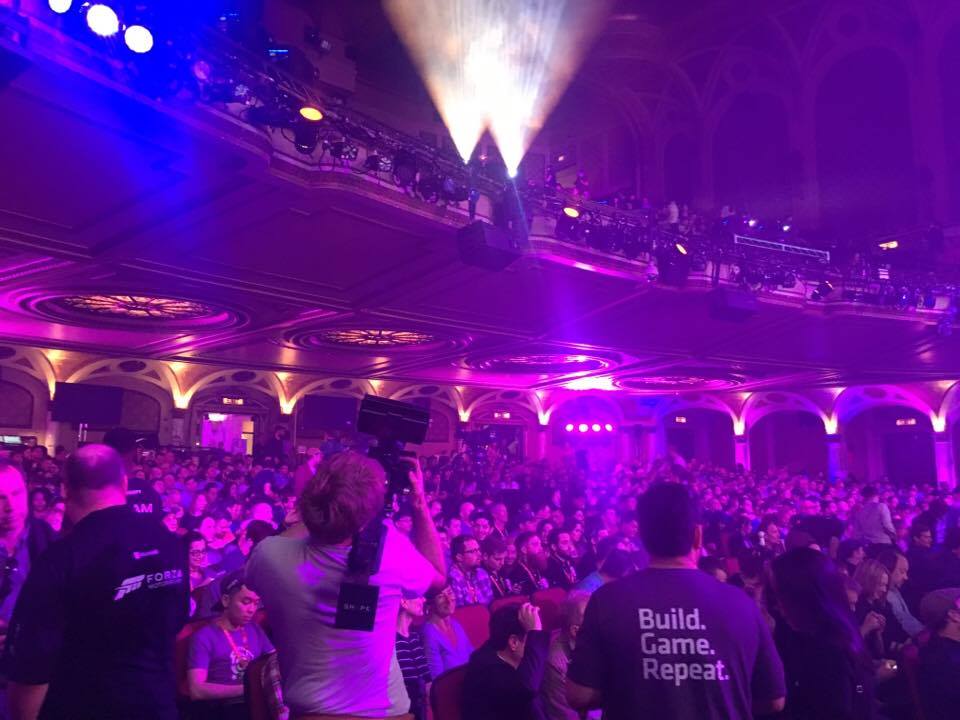 I can't speak to any decisions made by the show's organisers, but from ground level, it appeared as though they weren't quite sure how to handle this new E3. Despite a sudden influx of con-goers, the structure of the show remained pretty much the same as last year, albeit with a couple of fan-friendly events outside the convention centre, such as the Geoff Keighley-hosted E3 Coliseum, where developers gave panels about their games, and an outside esports area. There were, however, no special days focused on business before the floodgates opened (a la Gamescom in Germany), and there was little delineation between spaces open to the public and spaces reserved for private meetings and events. I spoke to multiple first-time attendees who said they initially felt lost and overwhelmed, like they didn't really belong at E3.

"It seemed to make industry folks hostile toward the new attendees and created an 'us vs them' environment. You could feel it in the air."

"It seemed to make industry folks hostile toward the new attendees and created an 'us vs them' environment," said a friend of mine, Teri Panda, who purchased an expo pass this year to attend the show with her partner. "You could feel it in the air."

She added that while she's happy she went, lines were excessive, and getting in to actually play games such as Star Wars Battlefront 2 was akin to "winning the lottery". She also criticised the show for a general lack of diversity, which she said she was aware of as an issue in the gaming industry, but was taken aback when she saw it with her own eyes. "Ultimately we don't believe the price was worth it, and the environment was much less friendly than PAX, which we found ourselves greatly missing by comparison," she said.

Some game developers and publishers did try to make accommodations for enthused newcomers — especially as the days wore on and they realised what they were dealing with — but those efforts were inconsistent at best. For every instance of Nintendo ensuring that wait times were semi-manageable or Call of Duty bringing in a fake drill sergeant to keep people entertained while they waited, there was a six-hour-long line outside Bethesda's elaborate diner-themed booth or a demo that was over in a fraction of the time people waited to play it.

"I'm a Sonic veteran," one attendee wearing a Sonic T-shirt told me. "I finished the levels in Sonic Mania and Sonic Forces in a minute and a half. So I waited an hour and a half for a minute and 30 seconds [of play time]." Others described similar letdowns, telling me of four-hour Call of Duty lines and day-long waits that culminated in the show floor closing before they ever got to play.

At one point, I saw a professional camera crew for a news outlet almost running straight into a yodelling streamer with a selfie stick and a guitar. (It was the most E3 2017 moment of E3 2017.) People are interacting with games in more ways than ever, and the industry side of the gaming industry is having trouble keeping up. Video game companies and the ESA want those people involved, but they don't seem to know what to do with them or where to put them.

That same awkwardness expressed itself during the weekend press conferences. Where once E3 shows were characterised by stuffy execs rattling off marketing buzzwords, this year we saw companies such as EA, Microsoft and Ubisoft trot out YouTubers, streamers and esports-style presentations with mixed results. Industry folks snarked it up about EA's awkward YouTuber and Microsoft's jarring, colourful-shirt-clad esports yellers, and even popular YouTuber Jesse Cox said he felt "gross" about companies using players' clips in press conferences.

Good streams and esports events rely on genuine excitement that's very hard to manufacture in the midst of a marketing event. Watching people halfheartedly feign it rings even more hollow than boring-arse men in suits talking like they're giving PowerPoint presentations. Most attempts at manufactured excitement also failed to match a handful of genuine displays of emotion. Ubisoft developer Michel Ancel wept when he introduced Beyond Good and Evil 2, and Davide Soliani started tearing up when Shigeru Miyamoto spoke on stage about their collaboration to create Mario + Rabbids. It was heartwarming, but it also served to drive home just how insincere some of the other moments that shared the same stage had been. E3 will probably never be a show about celebrating art for art's sake or the triumph of the human spirit, but even when companies are out peddling products with a million Mardi Gras' worth of glitz and glamour, it's still people who made those products.

"Usually as a consumer, all you see is the outcome. You don't get to see what led to it."

One thing many fans cited as an upside of this year's E3: They got real face time with developers. They got to meet the people behind their favourite games, even if it was during business hours for some of those developers. "I like to talk to people, especially developers," said an attendee named Kevin Song. "A lot of the developers at booths are pretty talkative and friendly, so it's easy to learn about their mindset, the development process of the game, and what their intent was. Usually as a consumer, all you see is the outcome. You don't get to see what led to it." 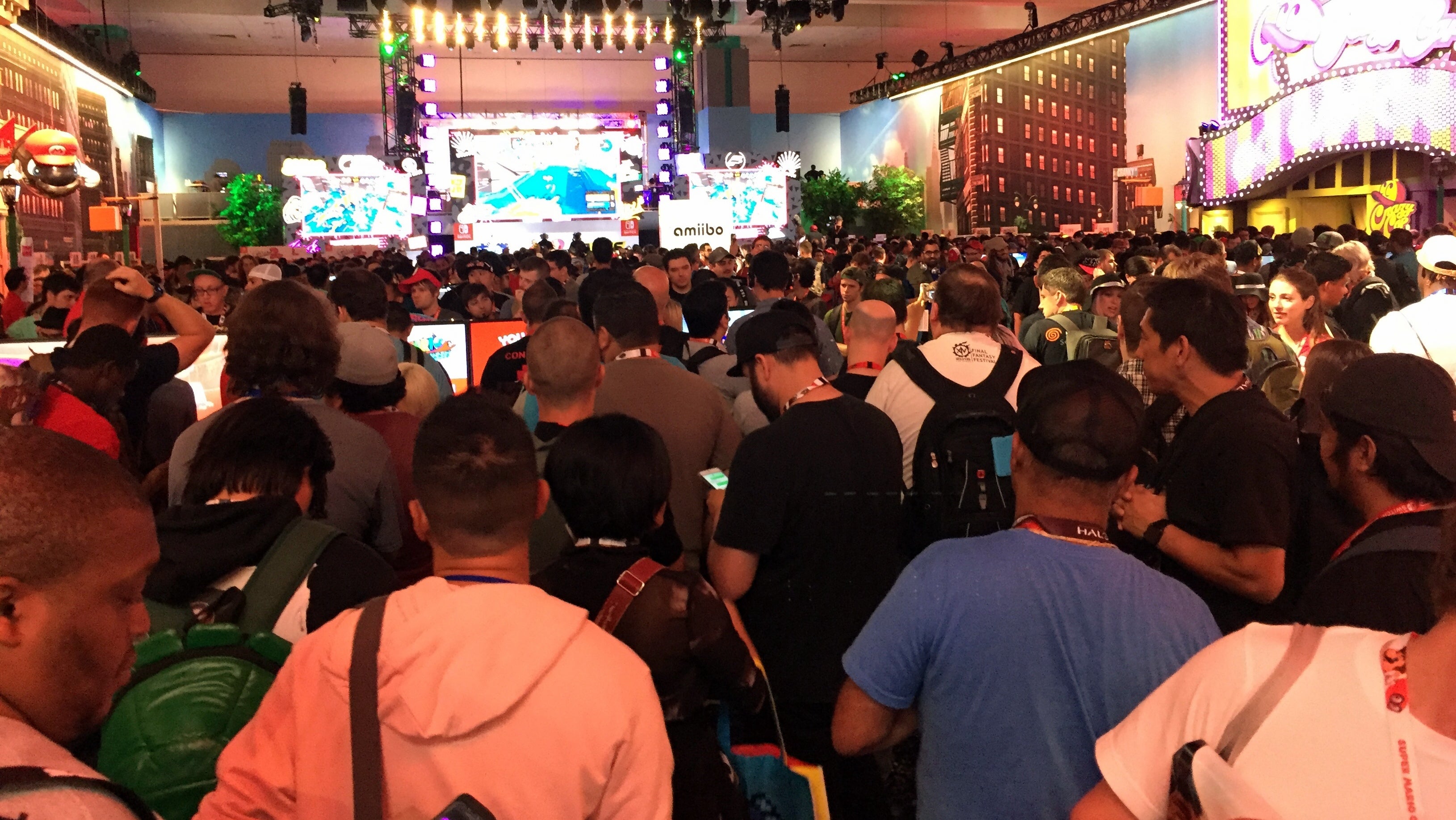 Developers I spoke to — while not always thrilled that they had to wade through seas of people — echoed that sentiment, saying that fans' flood of fresh enthusiasm was contagious. After years of attending E3, it's easy to walk in and immediately feel tired and jaded. But when you have people acting like they're at Disney World and you're a damn wizard, it's hard to stay cynical. "I think there's always an energy that comes when people get to interact directly with your game," said Johnnemann Nordhagen, a developer who helped make Gone Home and is now working on folk tale game Where The Water Tastes Like Wine. He also noted that this year's increased floor traffic pushed more attendees toward indie games, which often get passed over at E3. "It's really cool when people see a game they'd never have come across, and then they're incredibly enthusiastic about it," he said.

2017 found E3 in an an awkward pose, with one foot still in the business world and another clumsily lurching toward fans. Organisationally, it was a mess. But while I spoke to a handful of fans who said they got their fill and probably won't be returning next year, others told me they had a fantastic time despite a little grumpiness and a lot of waiting. One person even told me they had stopped playing video games, but coming to E3 with a friend got them interested again. Everyone I talked to agreed on one thing, though: They hope the show is less crowded next time.